A well-balanced party game for your phone or tablet-based video game meals. 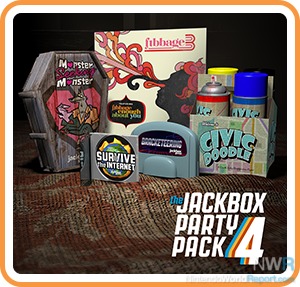 For the first time, a new Jackbox Party Pack hits Nintendo platforms right around the game’s initial debut. The Jackbox Party Pack 4 is heading to Switch with five new games, or technically six if you really want to get specific. In general, Party Pack 4 is an efficiently masterful party game. Each of the games are quick to get into and don’t have any of the tortoise-like pace of fun but long-winded games from Party Pack 3 like Tee K.O. Some might require a little more investment than others, but whether you’re trying to entertain a large in-person party, hosting a raucous video stream, or just hanging out with a friend or three, Jackbox Party Pack 4 has something for you and the refinement and versatility makes it the best of its kind on Switch.

The one returning game in this pack is Fibbage 3, playable with two to eight players, which also comes with a variant called Fibbage: Enough About You. Fibbage 3 is more of the same, but the visual design is like a ridiculous ‘70s TV pastiche. This is still the same fast-paced game about trying to trick your friends with creative lies, but the splendor of its presentation is amazing. Enough About You, which requires three players at a minimum, brings reality into the game. To start, each player puts down a true fact about themselves based on a prompt, and then everyone else tries to create lies to fool others. I prefer the regular version, but Enough About You is a nice change of pace. 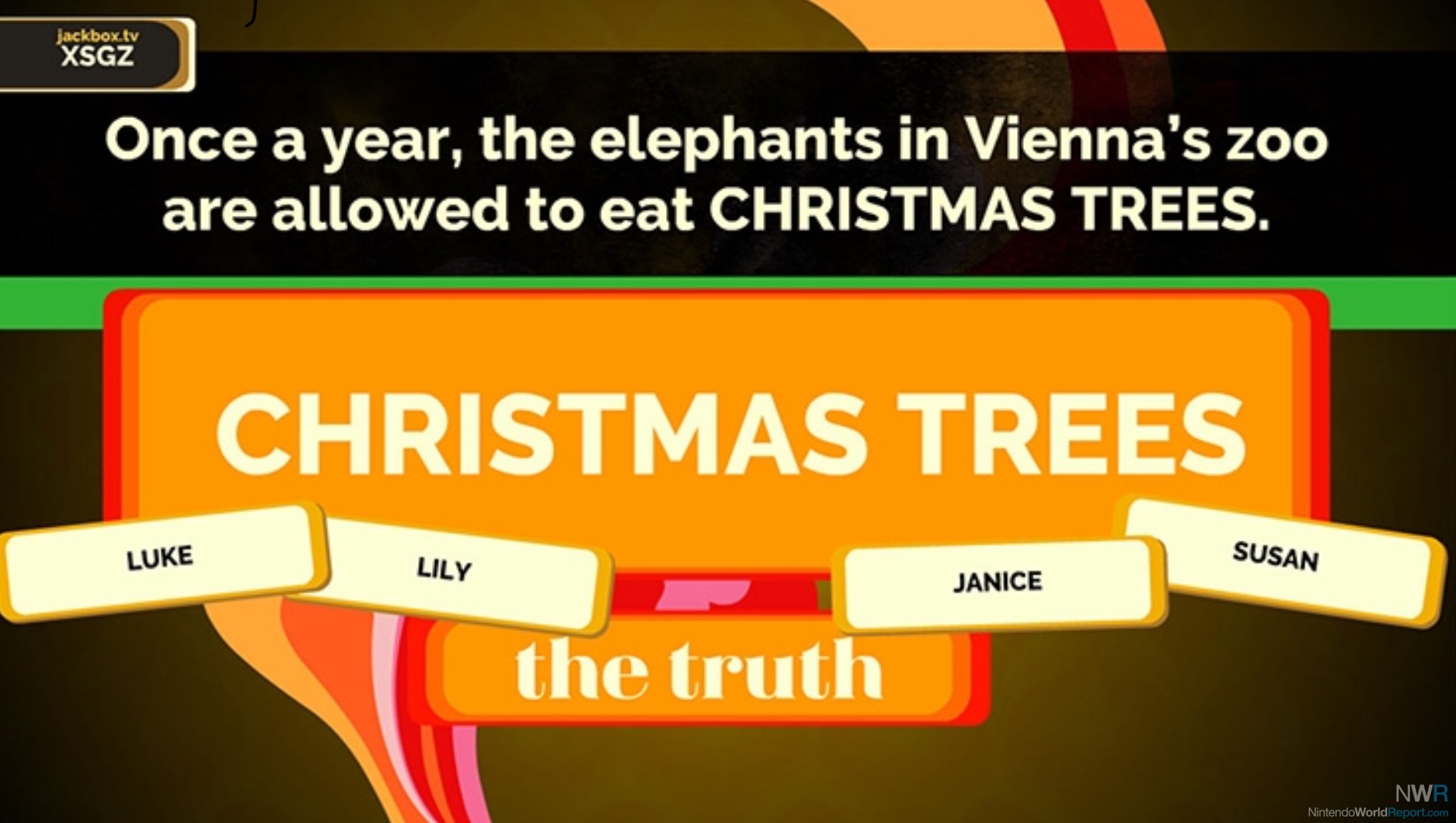 As a sucker for a good old-fashioned nonsense tournament (see: Nintendo World Report’s “Tournament of GOTY” end of the year plans), Bracketeering is a concept near and dear to my heart. With support for up to 16 players, it’s an ambitiously large game that is all about coming up with dumb, likable answers for goofy prompts. After everyone picks, players get the chance to predict what will win in one of the matchups. This continues for multiple rounds until a winner is crowned. As the game develops, it gets even dumber as the topic will be changed mid-tournament, thus making your seemingly innocent answer more dirty or your ridiculous answer actually make sense. Bracketeering isn’t deep, but it’s low-barrier crowd pleaser, and the fact it can handle 16 players is delightful.

Survive the Internet and Civic Doodle, which can both handle anywhere from three to eight players, both claw at a collaborative design. In each, players will do something, whether it’s write down a pretend internet comment or start working on a town mural, and then other players will get the chance to craft a headline for that comment or add their own touch to another’s artwork. While other Jackbox games have effectively used this level of collaborative competition and interaction, this pair of games do it in a way that is fast-paced and more constantly interesting. 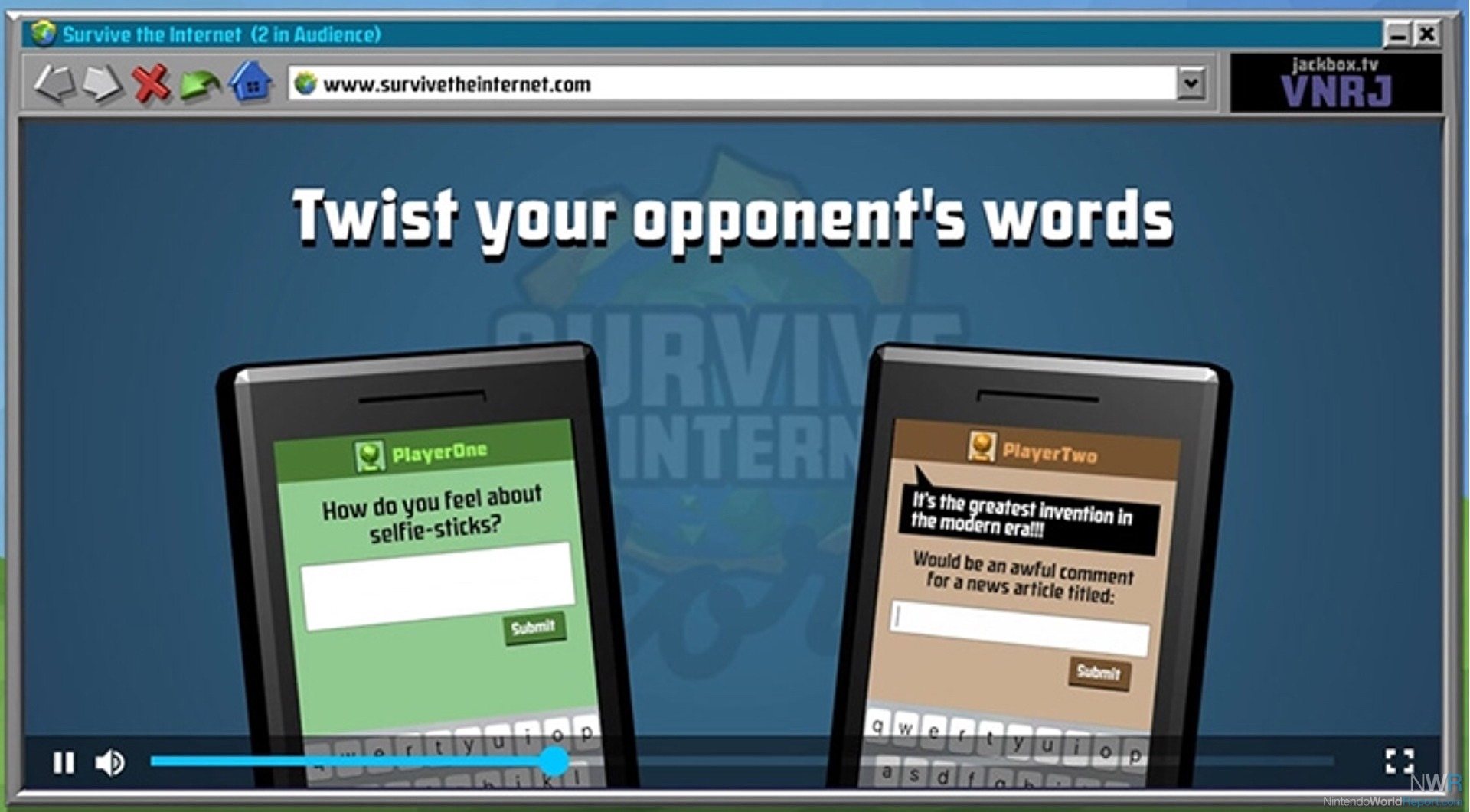 Monster Seeking Monster has great potential, it’s entirely dependent on your group. Everyone involved needs to buy into the concept of trying to date each other. You have limited in-game messages to try to set yourself up on a date with another player. Along the way, you can lead people on and hope to spoil the fun of others, but it very much requires the right group. Your players need to be into monsters dating monsters and the weirdness about it. If not, you’ll just have people picking randomly and not having any crazy monster flings. Rounds stay fresh, even with few people, thanks to each player having a special game-changing “monster ability” as well as a robot that helps make smaller groups have a bit of a wild card. Additionally, the design of the game on your phone makes it intuitive to use your phone’s back button (if applicable). I was one of many players who kept backing up to a non-Jackbox page on my browser. Fortunately, it was easy to get back in.

Through my playtime, only a few problems irked me, mostly on the technical side. Load times were on the longer side and the game froze on me a few times. That, unfortunately, killed some fun games, but the nature of Jackbox’s design makes it so those problems are just a stumbling block and not a game-breaking dilemma. I’m relatively sure the loading issues weren’t server-related either. As you might know, Jackbox games rely on servers to work, so you’ll need an internet connection to play. I was able to tether my Switch to my phone and it worked just as well as it did when connected to the internet in my home.

Each game in Jackbox Party Pack 4 is a winner - something I’ve never said about a Jackbox pack before. These games don’t have convoluted rules and are super easy to jump right into, with each one being a great time even if you’re flailing and not scoring any of the requisite points required to win. The variety also makes it versatile for different groups, and if you’re searching for a solid party game on Switch, this might just be the one to break out during the holidays.