The concept and aesthetics are birdie or better, but the whole game hovers around par.

For years, Nintendo fans have craved a new Mario sports RPG following the Game Boy Color and Advance entries in Mario Golf and Tennis. The fusion of arcade sports with a charming narrative worked well back then, but has sadly been cast aside over time. Luckily, fresh-faced indie developer Sidebar Games picked up where Nintendo and Camelot left off and revived the long-dormant sub-genre with, for the most part, delight and wonder in Golf Story, their Switch debut. To add a laborious golf metaphor, Golf Story manages to hit under par but only thanks to its decent handicap of good will and neat ideas. 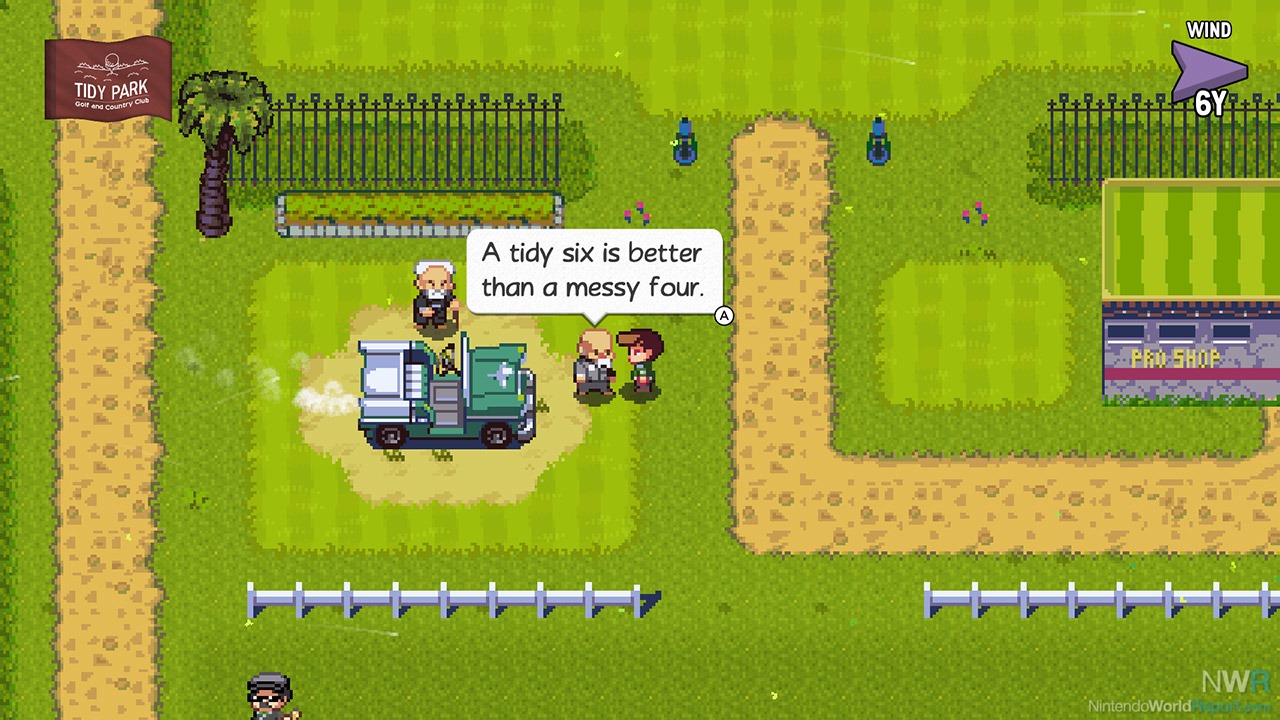 The golfing is exactly what you’d want out of an arcade golf experience: simple to learn, hard to master. It makes use of the traditional 3-button-press golf concept that dates back to NES Golf, as you press a button once to start your meter, twice to set your distance, and a final time to nail your accuracy. Where Golf Story shines is that it has a variety of options to let you accurately fine tune your shots, most prominently with the Precision Meter, which lets you more specifically mark where your shot might land depending on your distance button press. It takes a lot of the guesswork out of your distance presses, but random elements still need to be accounted for, like wind, slope, and obstacles. Ultimately, the golfing here is good enough, but maybe not quite on the same level as a Mario Golf or an Everybody’s Golf (formerly known as Hot Shots). Divorced from its RPG trappings, the golfing isn’t strong enough to stand on its own, and that makes the included golf-only modes not too enticing.

In addition to the overt Mario Golf Game Boy feel and style, Golf Story also gnaws at another old Nintendo game: EarthBound. It feels rote making this comment because basically every commentary or review of this game has called it out, but that’s happening because the “Mario Golf by way of EarthBound” throughline is spot on. It oozes the tone and charm of the Super NES classic, especially with its retro aesthetic and peculiar real-ish characters in larger-than-life situations. You take control of an aspiring golf pro who follows his golfing passion years after his dad first showed him how to golf, which is the heartwarming father/son tutorial. The protagonist’s adamancy to try to be the very best is fraught with doubt and mindless quests from others around him. His journey keeps embroiling him in weird situations, whether he’s trying to kick out some unruly Disc Golf players or mowing a lawn. If that seems humdrum to you, just wait until later. This thing takes some out-there turns.

Golf Story plays to its strengths in Story Mode, focusing on the breadth of what you can do by exploring the world, especially early on in your journey. Course play doesn’t happen that often, mostly surfacing for tournaments and competitions. In between, you’re completing quests for people in the world, whether it’s just fine-tuning elements of your golf game or learning how to take advantage of or avoid hazards and obstacles. Some quests involve playing other mini-games entirely, like Disc Golf or Mini Golf. One early and ridiculous one has you teeing off on bits of food to feed fish in the water.

It all is at its best when the challenges border on adventure game-like elements. Completing quests to give you items that you then have to figure out how to use in another situation. The focus does narrow in the back half, which doesn’t play to the strengths of this weird world. Early on, a sense of mystery and excitement helps overwrite some of the less-than-stellar moments, like the repetition of menial golfing challenges and some occasional technical hiccups (I’ve had a few bothersome hard locks in my 15+ hours of playtime). One of the early hooks is that you can drop the ball anywhere to solve a problem. That idea mostly disappears as you work your through the adventure. What at first seemed like a focal point soon becomes an afterthought that gets dominated by scripted story segments and quests. 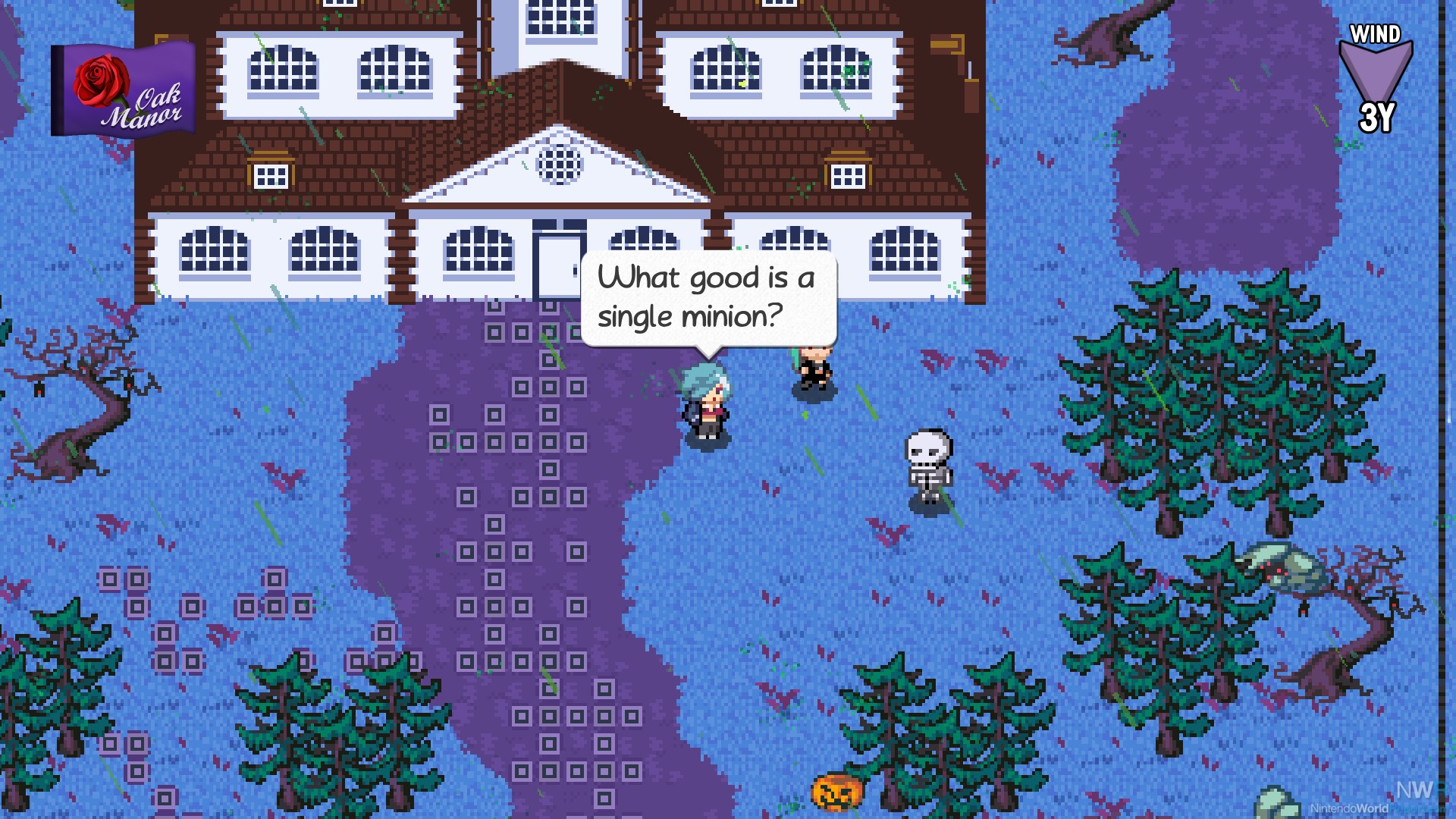 Fortunately, the story’s fun in its daffiness, even when the scope tightens up. Even in the face of high drama, nothing’s ever too serious. Your player character often feels like the one sane person in a world of crazies, who are all punctuated by word bubbles that enlarge, shake, and wince in coordination with HD Rumble. That personality helps, once again, to overcome lesser aspects, but a drawn-out final act wears the concept thin. The HD Rumble is absolutely stellar, though, as it whirrs when you nail a shot and seems to mimic the response of a human getting hit in the face with a golf ball when you, well, hit a human in the face with a golf ball.

Golf Story doesn’t totally live up to the legacy of those Mario sports RPGs, but it does a very good job at touching on those classics and putting its own spin on the genre. A few nagging issues might draw down the experience, but the golfing is fun enough to work in tandem with a wacky story and world to make a genuinely enjoyable adventure on Switch.

Thanks for the review.  I know you gave it a 7.5, but the description you gave make it sound like exactly what i'm looking for in this game outside of some of the funneling into linearity end-game.