2K delivers unrivaled gameplay, but a number of bugs and glitches hold it back from being something truly special.

*Video Review at the bottom of the article*

It’s been nearly five years since NBA 2K last graced a Nintendo console, but after a long hiatus, it’s back. 2K and developer Visual Concepts worked hard to bring a full-featured version to the Switch and they were able to do just that, with the only caveat being that it runs at 30 frames per second and not 60 fps like other versions. The attention to detail in the gameplay is unmatched, but it’s hampered by a number of bugs and glitches that tarnish what would otherwise be the pinnacle of a sports sim. 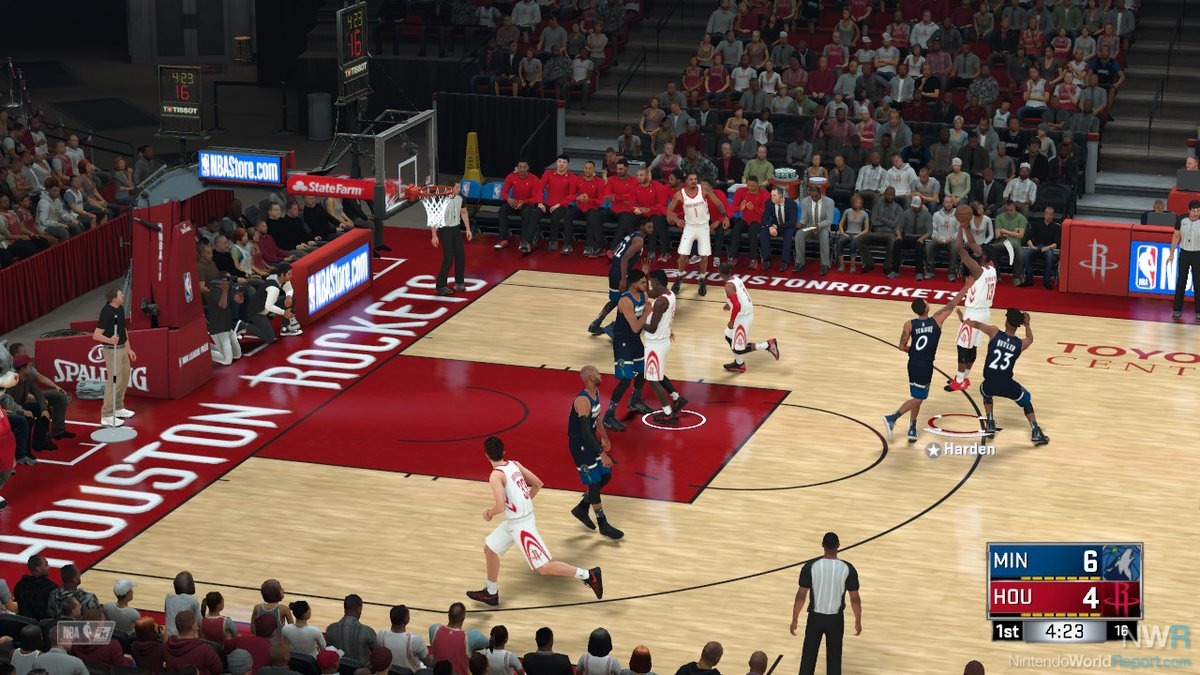 Having not previously played a 2K sports title, I dove into the deep end with NBA 2K, as might be the case with many primarily Nintendo gamers. It’s always been stated how deep 2K games are and this year’s version is no different. For players unfamiliar with the franchise, you might find yourself chucking up shots from all over the court hoping to make those shots from “DOWN TOWN!”, but you’ll quickly learn this isn’t NBA Jam. Instead, 2K18 requires a much more strategy-laden approach, where sticking to your man on defense and setting up pick and rolls are vital. While initially it can be a bit daunting, with the use of tutorials and a few games under your belt, it’s easy to get into the rhythm of setting up plays and finding open lanes to the net with a series of effective passes. The basic controls are simple enough for anyone to jump in, but depth is just underneath the surface so that those more familiar with sports sims can feel at home. This is where it becomes evident just how good of a job 2K does at achieving the feel of a real NBA game. It can’t be understated just how great the game feels.

2K18 offers a bounty of game modes to delve into, but none more touted than MyCareer. In this flagship mode, you create a character and work your way from playing 3v3 street ball to suiting up for favorite professional team. A veteran player will take your hoop dreamer under his wing and show you the ropes as you strive to gain more playing time and eventually achieve the status of a starter. It’s important to note that you only control your created character whether you’re playing or not. This leads you to be at the mercy of the coach for how much playing time you’ll be getting and how long you’ll be riding the pine, making it all the more vital to improve your stats in order to increase your minutes per game. This can be done by performing well in game or taking to the gym in a number of different mini-games ranging from situational basketball drills to pumping iron in the weight room. What was most surprising to me was just how much dialogue and cut scenes are in this mode. For as much time as you’ll be spending on the court, you’ll be doing tasks off of it in the neighborhood, such as the previously stated mini-games, but also managing social media, meeting with your agent, visiting the NBA store, getting a fresh cut at the barber, and even trying to nail down those elusive sponsorships. A fun element of the neighborhood is the ability to see other players running around when you’re connected online, giving it all a sense of community and life. However, the online connection further complicates the way saves work. If you make an online save, which lets you access key features, you can’t even touch it while not connected. Issues with corrupt save files when not connected online are abundant as well, but fortunately you can redownload the saves when you’re back online. Those issues also happen with offline saves and sadly, you’ll have no such option to redownload them. Patches are incoming to fix this for the Xbox One and PlayStation 4 versions of the game, but no word on the Switch patch at the time of this review. 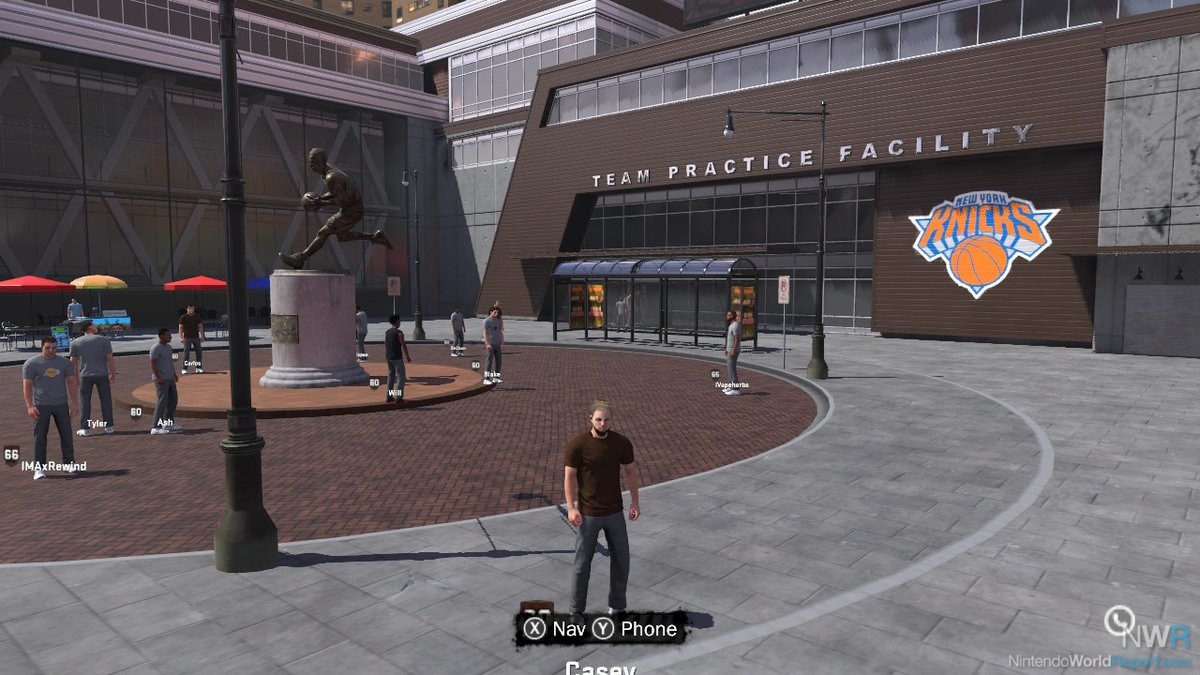 Adding things to do outside of just basketball seems like it’d be a nice change of pace to keep things fresh, but instead I found myself wishing I could breeze through these things to get back on the court. The mini-games just aren’t that engaging and lengthy load times pushed me to completely skip them only after a short period of time. Fortunately, those are completely optional, but when it comes to pre- and post-game cut scenes, that wasn’t the case. These lengthy interactions were fun at first, but I quickly grew tiresome of them. Only compounding the issue were the multiple occasions where the graphical glitches and voice acting outpaced the animations, leaving me to finish the cut scene sans dialogue. But that wasn’t all, often it chugged during these cut scenes, making an already annoying situation last much longer than it had to. Overall, I was extremely underwhelmed with how MyCareer performed, littered with bugs that frankly shouldn’t have made it out the door for launch. As a featured mode, it’s disappointing to see 2K drop the ball so badly.

For those who prefer to have complete control of your team while playing, 2K has you covered with plenty of modes that perform much better than MyCareer. MyGM and MyLeague give you the reins of any NBA franchise with complete control over the roster and team moves. MyGM offers a mix of story elements while giving you full control of the squad on the court. If you want less story, MyLeague will be your best bet. You’ll still have control of the roster, including trades, scouting, and negotiating contracts, but the main focus is to take your team to the top. MyTeam is a card-based fantasy team where you unlock and purchase new packs to piece together your ultimate dream team.

With Play Now, you can jump into an exhibition match, hit the Blacktop to play some 1v1, 2v2, or all the way up to 5v5, and head online to test your skill with players around the world. My online experience has been superb, almost always connecting to an opponent within a minute and never having any lag interfere with the game. The most frustrating thing I encountered were opponents picking All Star teams, but maybe I’m just salty from getting dominated. 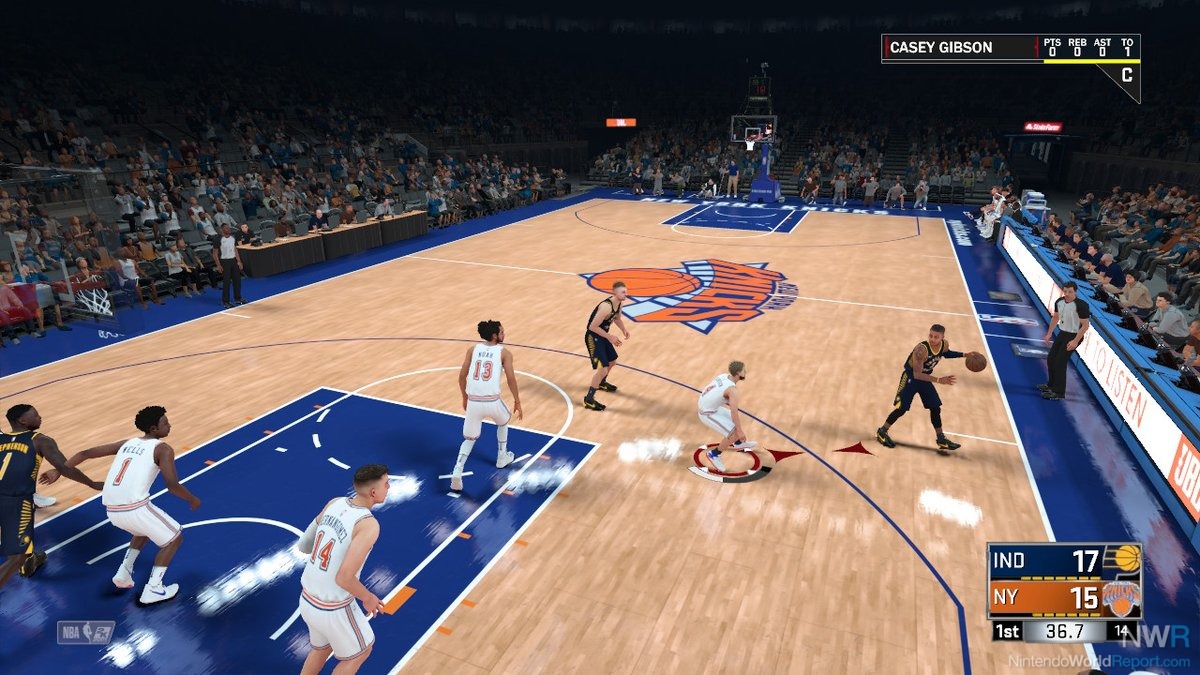 While NBA 2K18 still doesn’t look as nice as its brethren, it still is impressive visually and looks great both docked and on the go. As stated before, sometimes the game chugs and has some graphical glitches, but those hitches were limited to MyCareer and not while actually on the court. The game runs at 30 fps opposed to 60 fps, but does a great job of keeping gameplay smooth. To top it off, the soundtrack is stellar featuring a number of songs from popular artists.

NBA 2K18 is a strange beast, dishing up unrivaled gameplay on the court while seemingly leaving other areas unpolished and rushed out the door. If your primary goal is diving into MyCareer mode, it’s hard to recommend due to glaring issues that bog down the experience tenfold. On the other hand, if you’re looking to get into some of the other modes including online, NBA 2K18 does a great job of delivering a top notch experience.

Note: Keep an eye out for future patches/updates that could address MyCareer and save issues.

Is there Virtual Currency is the switch version of the game? Like for upgrading your players attributes and for customization?

Is there Virtual Currency is the switch version of the game? Like for upgrading your players attributes and for customization?

Yeah, and you can spend them on packs for MyTeam too. It'll launch you into eShop to purchase more with real money.

I see.  From what I have been reading about the game it seems like it is difficult to upgrade your player in game from a performance standpoint from just playing the game without purchasing points with money. Have you found this to be the case?

I can’t speak specifically to this version, but in 2K14 it seems like the same system was in play. Sure you could use real money, but if you’re going through an entire season, you’ll have plenty of chances to improve your character. I started out terrible, but after two seasons, I went from a low 60s ranking to a mid to high 80s. It’s a time sink (I payed full quarters, probably about 150 hours), but you can make progress and enjoy the awesome gameplay.

I can’t speak specifically to this version, but in 2K14 it seems like the same system was in play. Sure you could use real money, but if you’re going through an entire season, you’ll have plenty of chances to improve your character. I started out terrible, but after two seasons, I went from a low 60s ranking to a mid to high 80s. It’s a time sink (I payed full quarters, probably about 150 hours), but you can make progress and enjoy the awesome gameplay.

From what I've seen from various reviews, the VC is much less plentiful now & purchases are much more expensive.