Beach Buggy Racing is a great example of how games that work well and are popular on mobile don’t necessarily translate well onto the Switch. 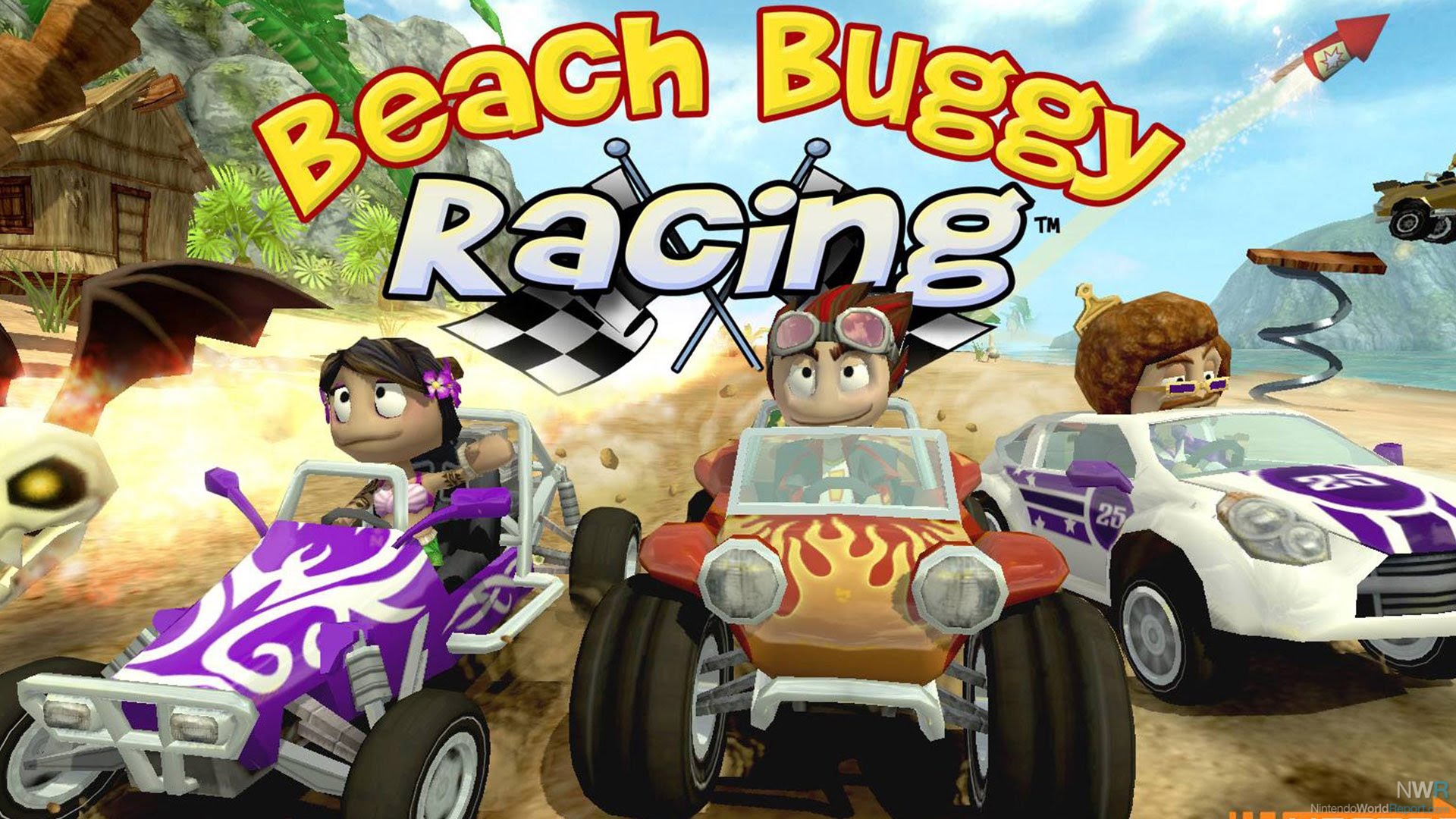 Overall I’d say that Beach Buggy Racing is among the better arcade-style racing games available in the mobile gaming space. Visually it is reasonably attractive, there’s a variety of racers to choose from who each have different skills, and there are numerous vehicles to choose from that can be upgraded and painted to look how you’d like. On the surface it seems decent enough. However, now that it has come to the Switch the bar has been raised and it is open to comparisons with a title that practically defines the arcade racing genre in Mario Kart. Unfortunately, even without exhaustively comparing the two, the move to the Switch has shown the cracks in the veneer of quality in BBR, and while it has some merit it isn’t an ambitious or compelling experience.

Starting with the positives, the overall appearance and presentation of the game is reasonably good. Not surprisingly, the game looks better the smaller the scale so in handheld mode it looks more impressive than when blown up in docked mode. The bigger it gets the more the geometry of everything around you begins to look unrefined and dated but thankfully the game does at least play smoothly without any signs of slowdown. 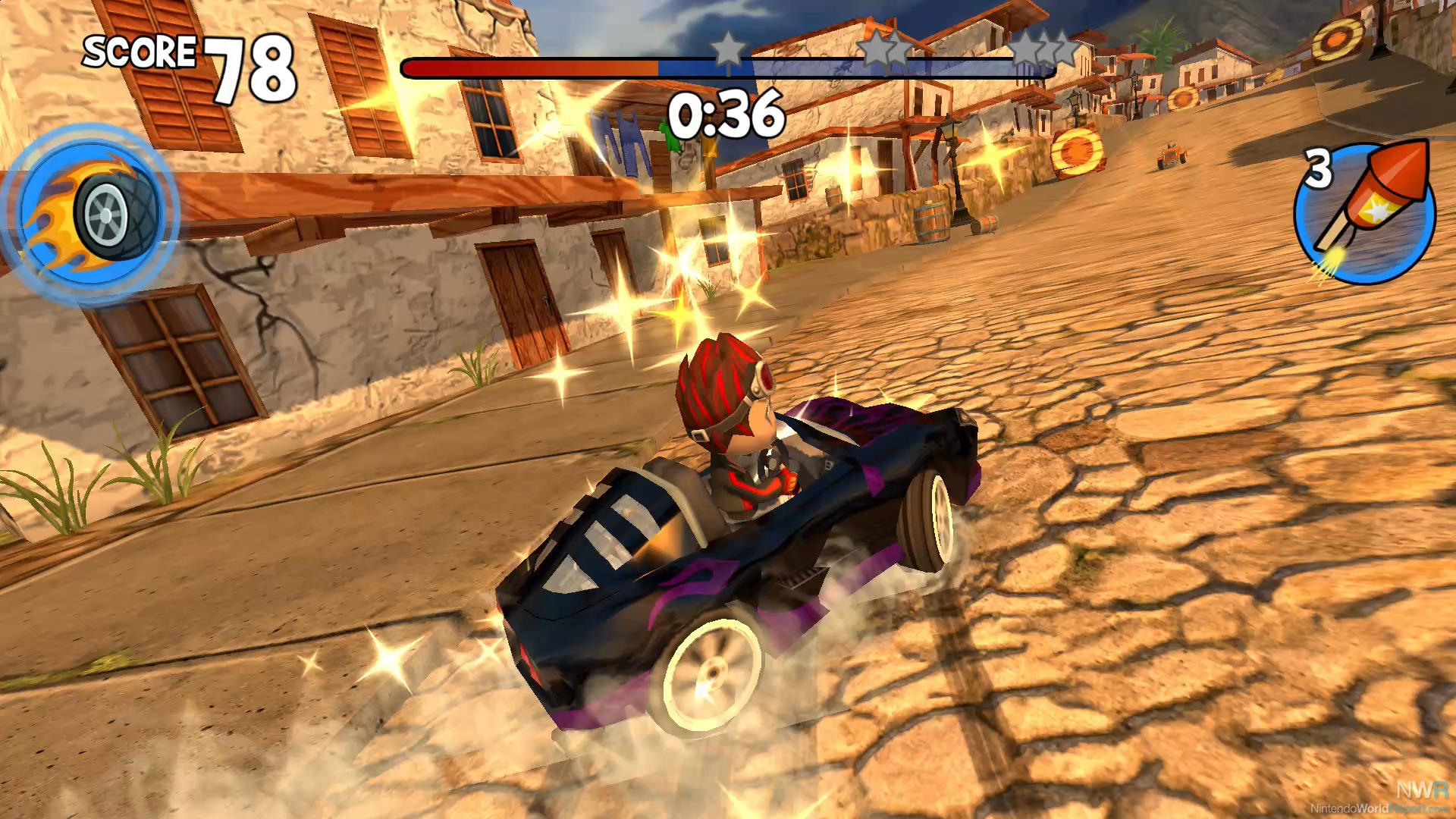 Moving into the racing and modes, overall there’s a fair selection of tracks to race on that look reasonably detailed and distinctive. Though the tracks have some elements like shortcuts, in general I haven’t found many of them terribly useful. At best they’re typically a break-even once you factor in the trouble they present getting to them or using them. There are a few modes to choose from, allowing you to go split screen to play against a friend, go for a quick race on a track of your choice, participate in a Championship series, try out the latest Daily Challenge, or simply try to unlock everything you can in the staple Career mode. To some degree this offers variety but for the most part it is all just repackaging the same things with no major gameplay distinctions between them. The Daily Challenge will vary which driver, car, and challenge you’ll face and will allow you to work towards a multi-day award if you can keep up with the challenges. However, both Championship and Career do little to differentiate themselves since you’re ultimately still in traditional races against the same overall AI opponents at the end of the day.

Getting into where things start to go downhill, it is a given that most people playing games on their phones don’t have the means for physical controls, so there’s a certain understanding of loose and floaty quality expected when playing them. Coming over to a system like the Switch, where dedicated physical controls and higher-quality games rule the day, you can’t help but take a very hard look at the gap in control and handling in the game both from the perspective of control and ambition. What you’ll immediately notice is that regardless of the dedicated physical control on the Switch, the steering in the game still feels imprecise for the most part. Perhaps more damning, though, is that the only goals at work here are to stay on the track and try to avoid stuff. There’s absolutely zero advanced technique in the game so generally races are won and lost much more commonly based your good or bad fortune related to items, trying to avoid making costly mistakes, and plain luck. In general the majority of racers tend to be in a relatively tight pack throughout races, making your overall margin for error low and potential for frustrations high. 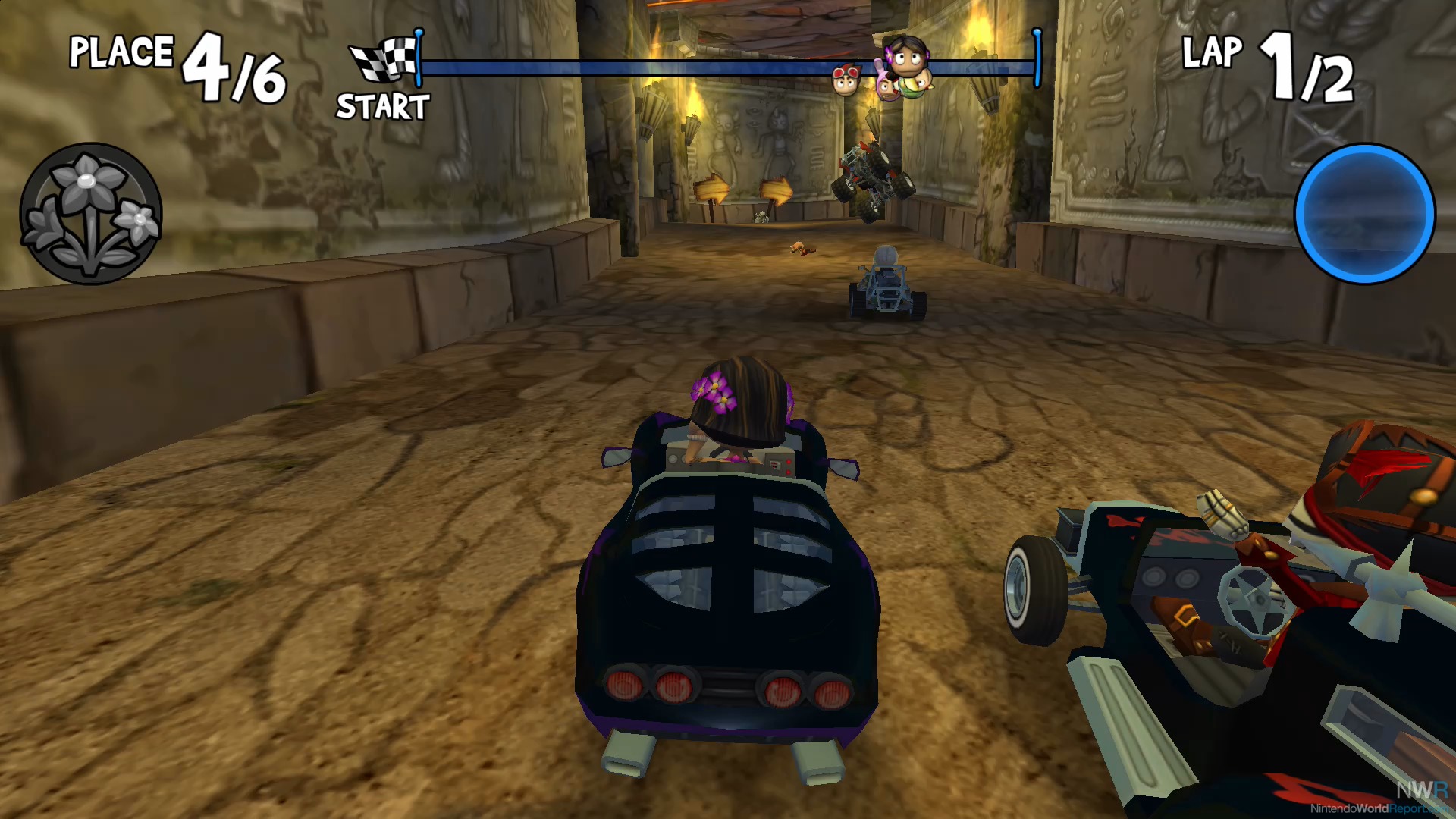 That leads to another complaint, that for all of the items in the game many are cosmetic, effectively redundant, and even limited in their effectiveness. With the exception of the shield power-up, which only protects you briefly, there aren’t really any defensive provisions like you can employ in Mario Kart. There also aren’t often any warnings before you’re hit to help you make more effective use of something like the shield. Even with status effect items used against other racers I’ve had instances where they’ve been hit by something and it did little to slow them down. Add in the very specific aggravation I had with races at the end of circuits in Career mode, where you can only use your ability once while your opponent is able to effectively spam it many times throughout the race, and the items and skills are possibly more of a hindrance than help given the advantage the CPU racers have in utilizing them.

As I said when I began the review, I actually have some familiarity with this game from the mobile space and I can respect it within that market as being reasonably good. Unfortunately, especially where control and complexity come into play, what works well in mobile is generally pretty mediocre on the dedicated gaming hardware of the Switch where the competition has set the bar far higher. If you’re truly bored of Mario Kart and looking for something to kick around for a while, or are less bothered by floaty controls than perhaps it will scratch an itch for you. Nonetheless I would have a difficult time recommending it for the majority of gamers out there.