Set forth and conquer the lands in this brilliant strategy title

It is dawn. The ghost of a ruler once before appears and calls out to you, leading you through a forest lit by the rising sun. You follow the spirit on your trusted steed, until you reach a campsite and a couple vagrants. After speaking a few words of wisdom, the ghost disappears, leaving you to build your mighty Kingdom. 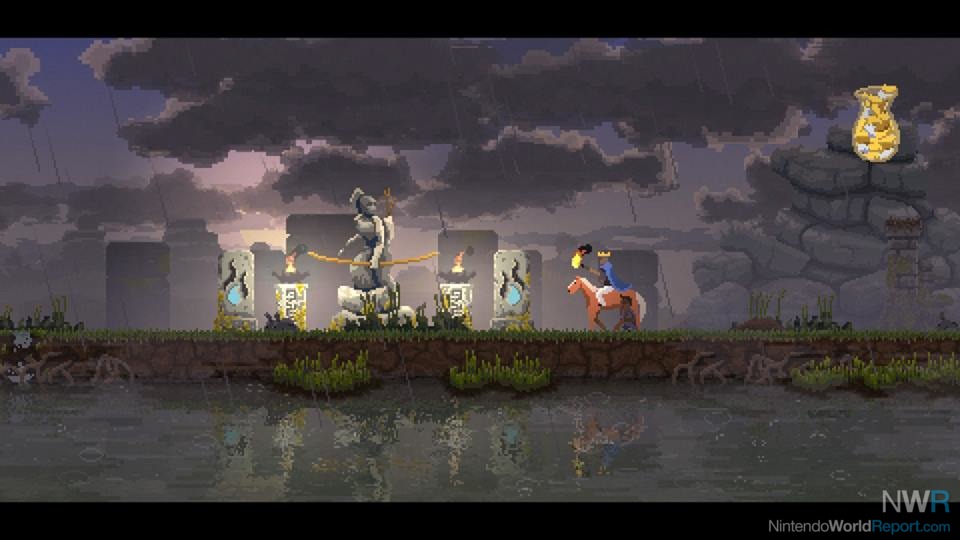 Kingdom: New Lands is a sidescrolling strategy game, with Tower Defense and roguelike elements mixed in. The object is to conquer each of the five islands by building your kingdom on each island from scratch. This includes hiring builders, archers and farmers (among others) to slowly fortify your base and raise funds to occupy the land. While the sun is up you need to get business done, for when the moon rises, the Greed come out to attack. Each day the onslaught increases, so building efficiently is key to succeeding.

Every new game has you seizing a new procedurally generated island, with the goal being to repair your broken ship and leave to conquer 4 more. Each island is more difficult than the previous one, but thankfully all of the strategy learned carries over. 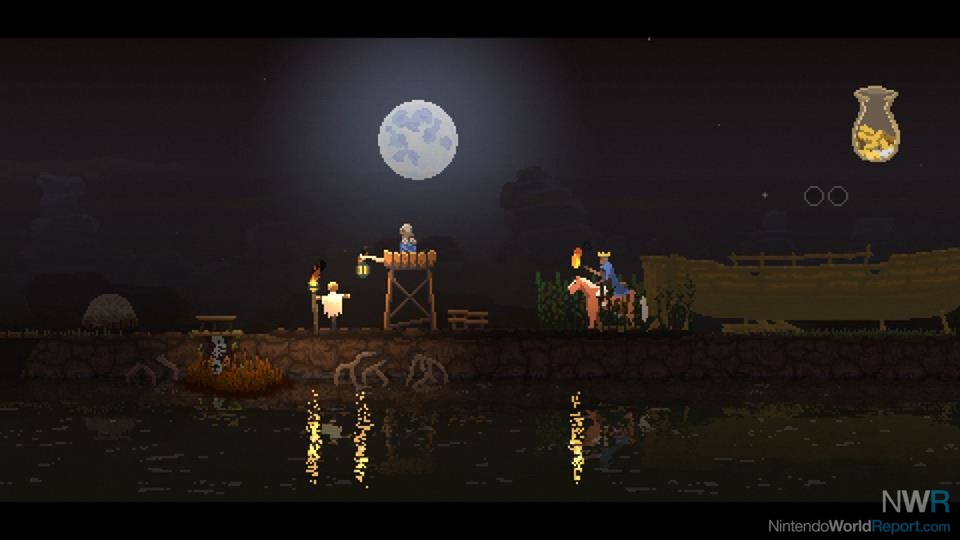 Tutorials aren't included throughout the game, by design. A big part of the experience was learning how everything works at my own pace through trial and error. Making one little wrong move can prove to be disastrous for your kingdom and lead to a path of ruin. Learning how to deal with these mistakes shows just how deep the strategic elements really are, rising up from a seemingly shallow and simple game concept that's basically "expand your kingdom". I anxiously started a new game after each hard lesson to put into practice what I had just learned. This sort of gameplay had me completely hooked, holding my attention for hours by its sense of exploration, accompanied with the amazing satisfaction of dominating the land. 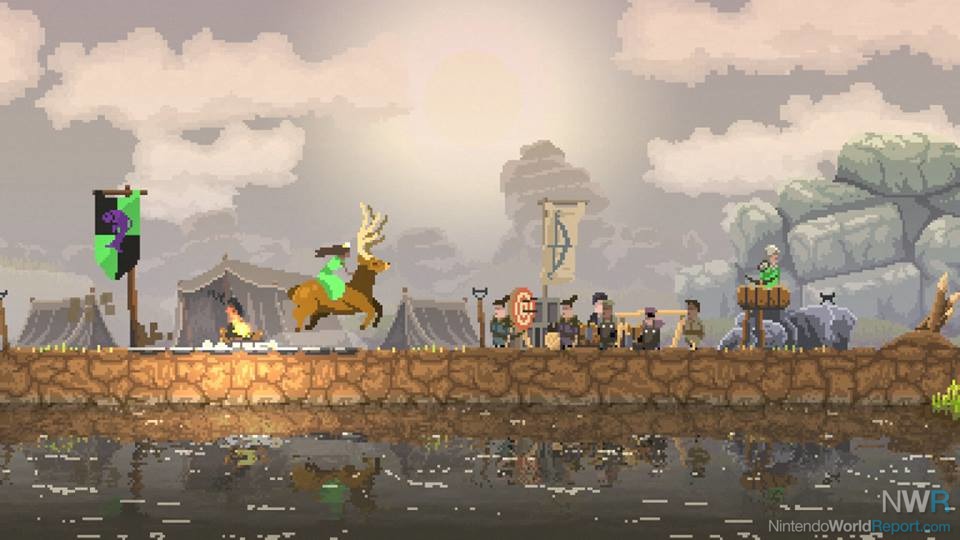 The visuals instantly delight with their beautifully designed sprites and impressive lighting effects. The layers upon layers of vibrant forests, landscapes and horizons combined with the soothing soundtrack make for a very engrossing experience. The only hiccup I've had with the game's presentation was the frame rate, which is inconsistent at times. Towards the end of completing an island the frame rate usually drops significantly, but never ruins the experience.

For also being available as a mobile title, it's not really surprising how well it plays on the go. But where I had the most fun was playing it on the TV. Because of this, having other people around to help strategize and delegate is not only possible, but extremely fun. My wife and I had a blast playing through each island, developing strategies on how we should set up our Kingdom in the next play through. 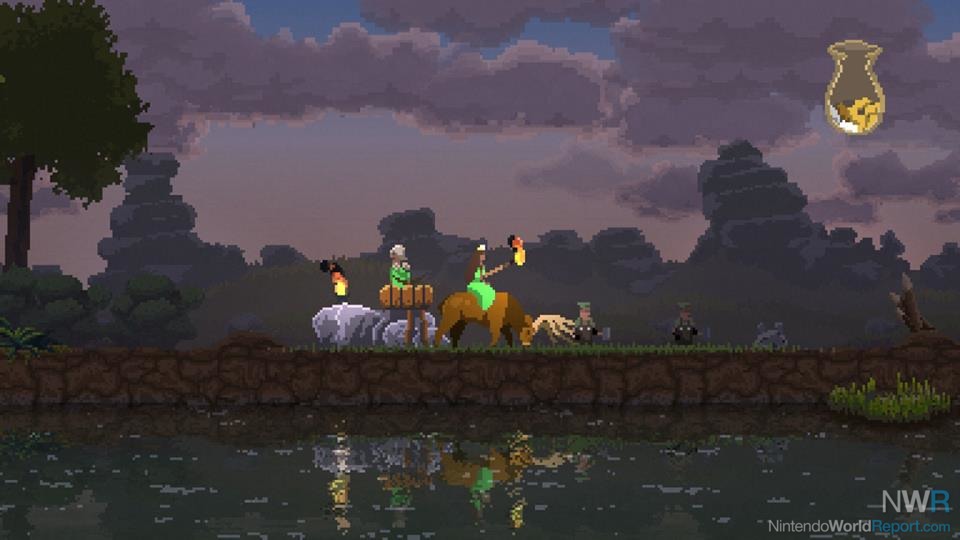 I have immensely enjoyed my time with Kingdom: New Lands. The set up of randomly generated island variations makes every playthrough both exciting and scary, and the feeling of branching out and fortifying your base is very satisfying. This is not a very action-heavy game, but more a dynamic adventure with the highs of triumph and the lows of defeat all wrapped up in a beautiful simulation game. With a great challenge, subtle and organic strategy and a gorgeous presentation, Kingdom: New Lands brings an excellent title to the Switch, one you won't want to miss.

At first I was not happy with this game because it does not explain anything and I did not understand. But after I read abit of mechanics and get some understanding I got quite engrossed.


I can only get passed first island because you only have to defend one side of your kingdom. On the second island they come from both sides and I get worn down faster than I can grow.


I think game would be better if you could speed up and slow down time, sometimes you can be sitting there waiting for coins doing nothing. Also a difficulty setting would be good because the game is hard as.

@Wanderlei I found the game engrossing at the beginning and ending up finding the first island easy but than ran into a roadblock a couple of games later and became unhappy with the game. I could not even beat the first island anymore. I had a similar sentiment as you at this point. Turns out I was not using farms properly (My first few play through I probably did not even use farms until very late which is why I was probably doing better than). After reading your impression about difficulty I think you are having the same problem as I was. I was not tearing down trees and not building grassy lands for rabbits. I would build my defenses next to a forest and get angry about not getting any money.  I would always end up spending the little money I have to try and set up a farm and it would get to a point where I would just stagnant and restart the game because I was not getting any money.

I figured out If you clear about 3-5 screen lengths of trees and gets lots of archers they will kill lots of rabbits and give you lots of money to do other things. I would also recommend getting a farm latter on as farms are good denser areas for getting lots of money but they are very expensive to set up and archers are cheap as long as you get lots of recruitment. Don't really need farms until you want knights and fully level walls and catapults. Hope these tips help you out.

I figured the same tree clearing method to generate rabbits to earn coins. At beginning I was relying on the tax man for income but starting from 3rd island he disappears.


I ended up completing all 5 island seeing the credits. All my early misgivings disappeared and I really loved my time with this game. Worth every cent.