Charming absurdity blended with fun, varied gameplay makes me mad it took me this long to play Retro City Rampage.

Parody is hard. Too often, bad jokes are followed by a pause for laughter that doesn’t come. Retro City Rampage DX on Switch doesn’t care. What looks like a Grand Theft Auto rip-off quickly devolves into subtle commentary on everything “bad” deified by the modern man’s nostalgia. Sure, the basic concepts of running from police, gunning through an open world, and grand-thefting autos were lifted from GTA, but the 60+ stages range from Mario-style platforming to Pole Position boss battles. Even the electric seaweed from the first Teenage Mutant Ninja Turtles game on NES gets a level. Almost 40 “Slaughter Sprees” and seemingly hundreds of collectibles strewn throughout the city keep the open world interesting. 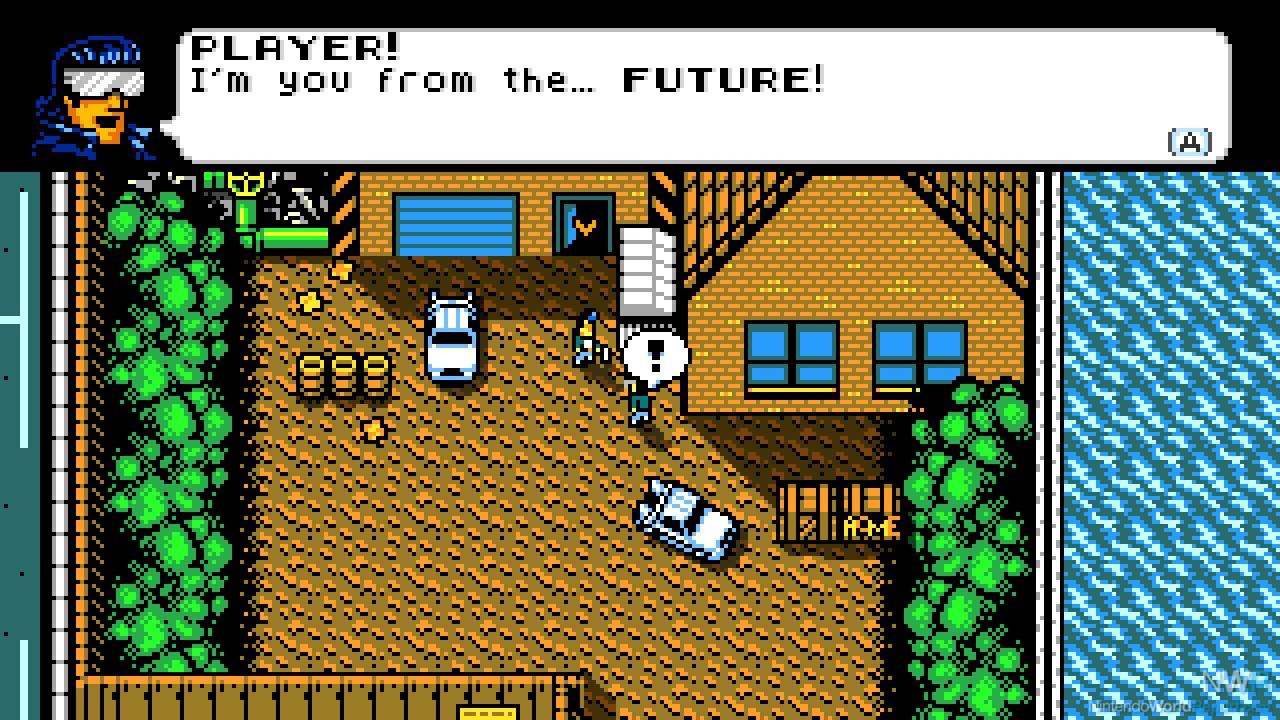 Story beats clip by at an extreme pace, making sure you never care about what’s going on. Basically, the aptly named “Player” gets sent through time and has to steal parts to build a time machine. At one point, a Ghostbusters-themed custodial team is frightened of dancers in a rundown club so Player has to “clean up” the club by murdering everyone. The script teases out a chuckle and a “WTF?” before quickly getting out of the way each and every time. Even the game doesn’t care about its story, made evident by the increasing absurdity of the scenarios.

Retro City Rampage DX does scratch that sandbox itch I was looking for with one major upgrade: cop-cloaking power-ups. For me, unbridled destruction is the entire point of the genre but is usually ended all too quickly by a swarm of SWAT team members. Kill enough cops or turn down the right alley of Theftropolis and you’ll find a coin that greatly reduces law enforcement’s interest in you. Dying takes away every weapon but jumping and punching, so gathering weapons from fallen officers is almost a prerequisite for each mission. Being able to drive down the sidewalk for a minute before slipping away to your mission keeps the momentum, while reserving the really big weapons for certain story points and high-level law enforcements keeps them feeling special. 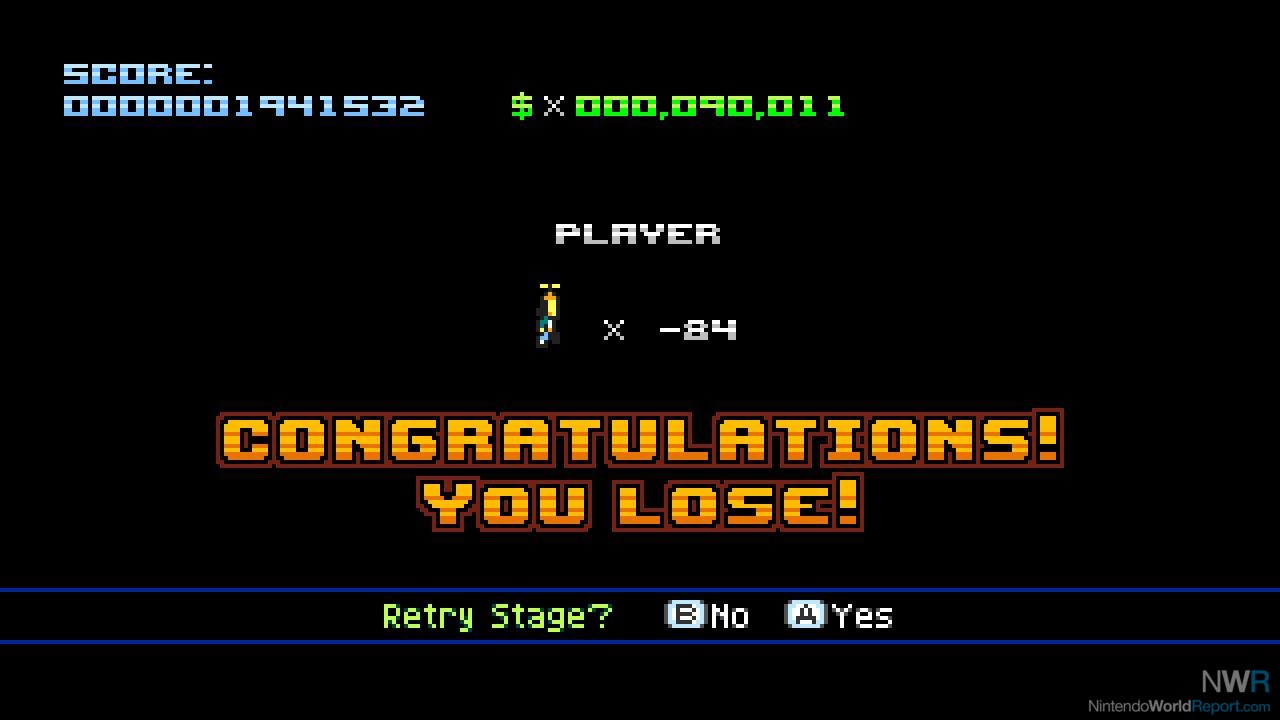 Some missions are fittingly hard given the retro vibe, but checkpoints are plenty and beating hard levels left me feeling satisfied, not frustrated. Retro City Rampage’s lives counter starts at zero, going negative from there. I ended the game over (under?) -100. I’m very picky with difficult games, usually quitting after a few deaths if I feel a game is wasting my time, but the deaths here were quickly forgotten as I was dropped at checkpoints generously close to where I died. No level overstayed its welcome.

Controlling Player is pretty straightforward, with some nuances. Jumping seems trivial at first, but dodging bullets and stomping on enemies quickly become necessary. Player can shoot straight ahead, in eight directions via the right stick, or locked on to a target by holding the fire button. Control competency is required in late-game levels and mastery in the timed Slaughter Spree side missions. 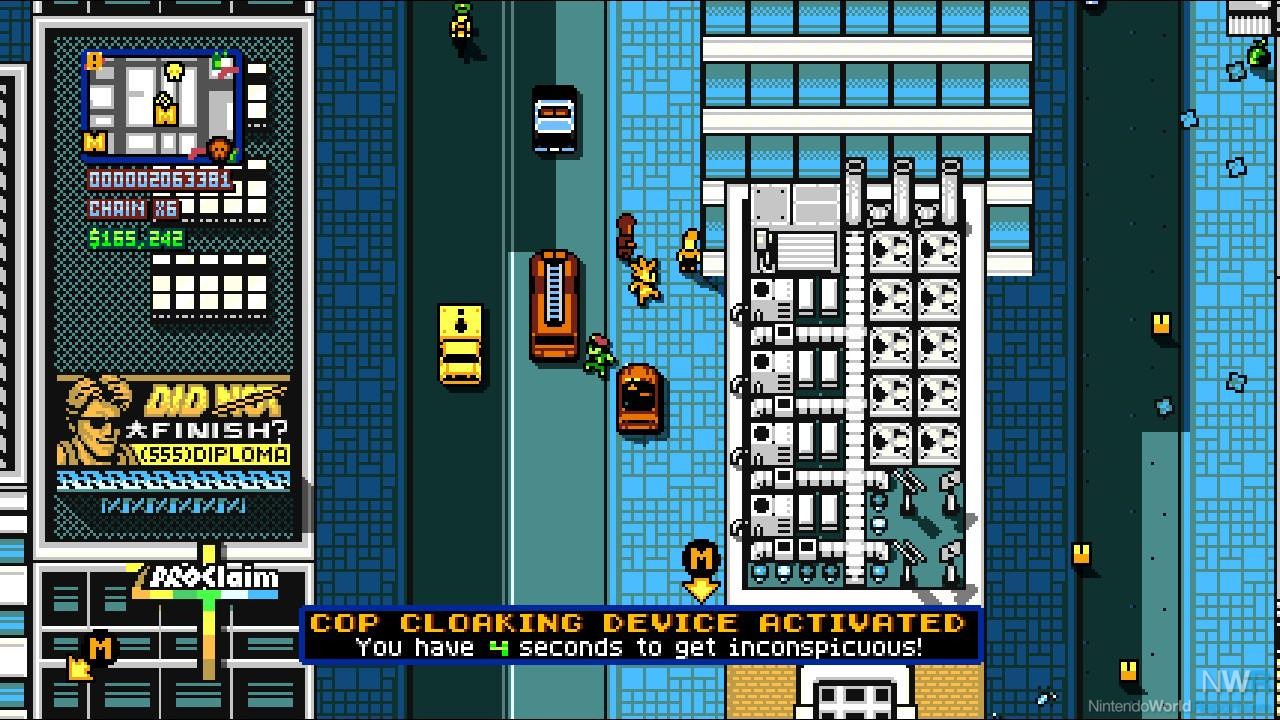 While hard to convey here, the entire game is drenched in a level of care hard to find in a big-team game. It just loves how stupid it is. Every time I thought “this is ridiculous,” it responded with an “I know, right?” and put a waypoint on Batman’s house or something. When a screen before the final boss told me to put on my 3D glasses, dammit, I red-Sharpied some cellophane and tied a Blu-ray case to my head. The 3D effect was awful and ‘80s and perfect. The sped-up “Turbo Mode” unlocked after the credits takes the game to nearly unplayable levels of ridiculousness.

Also, the game features dozens of retro screen filters and an absolutely wonderful soundtrack. It’s rife with murder and car stealing, but features very little blood, drugs, or sex; it’s surprisingly PG for a game about murdering everyone.

While Retro City Rampage DX’s story was somewhat short, its time on my Switch will not be. I still have plenty of side missions and collectables to grab, or I might just run down some pedestrians while riding the train.

I love this game. And I think it loves me, too.

Are there any differences between this and the 3DS version?