While some of its design choices may be divisive, Puzzle Adventure Blockle is an attractive and well-executed single-player puzzle experience. 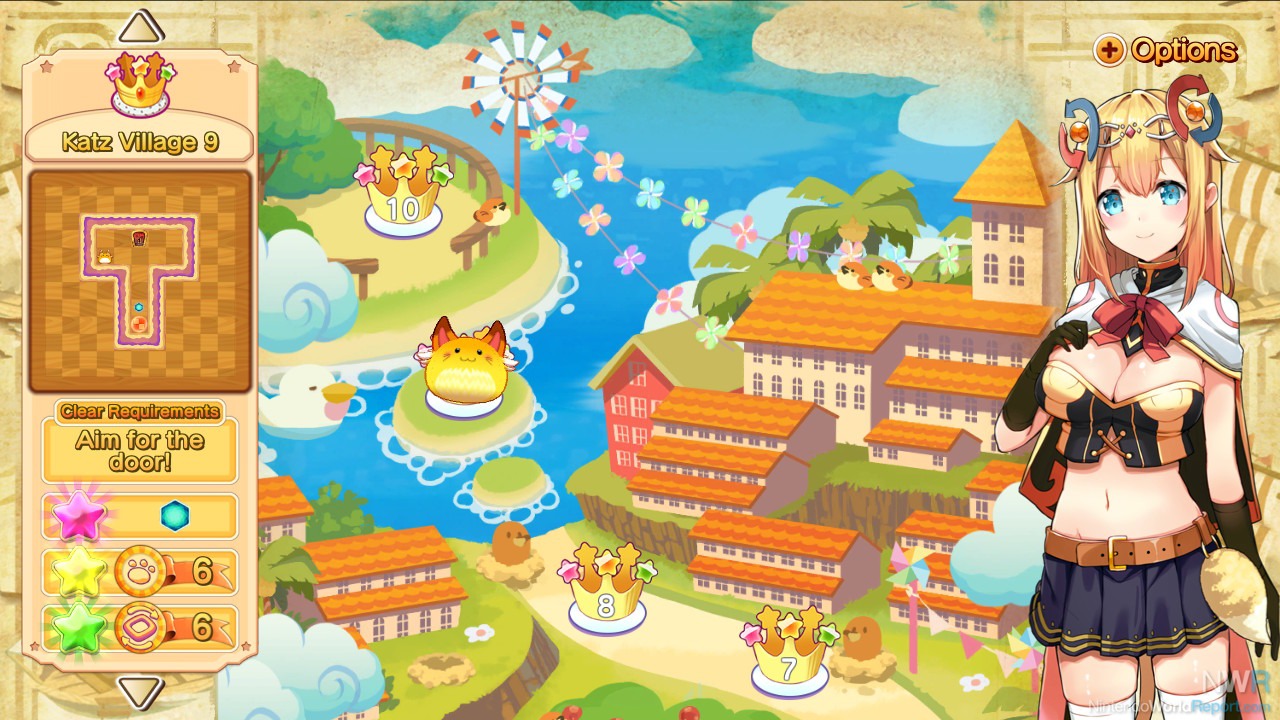 To this point, the Switch has had a number of puzzle games, but there hasn’t been a well-executed traditional single-player puzzle experience on the platform. Puzzle Adventure Blockle is a quality attempt to deliver one, mixing a colorful and cute anime style with 8 worlds of puzzle action. Each has a theme and will tend to introduce new mechanics to the mix, though there are some constants that transcend levels as well. If you’re thirsty for some quality puzzle action, and you’re not discouraged from playing for its odd choices in presentation, Blockle will keep you entertained for several challenging hours.

For most of the game you’ll be indirectly controlling a cute cat named Kulu, who is accompanied by the very curvaceous (and kind of baffling, I’m just accepting it’s a “Japan thing”) and bubbly Arika. Whether she’s a human, a goddess of some sort, or both is something you’ll need to find out for yourself over the course of a story that is simultaneously stock in many ways but punctuated by some truly bizarre and suggestive dialogue at times as Arika flirts with Kulu. I’m not sure how this intersects with the puzzle gamer demographic exactly, but I suppose in its own way it at least keeps the story of the two of them collecting world stars for the shady Mayor character from being completely dull. 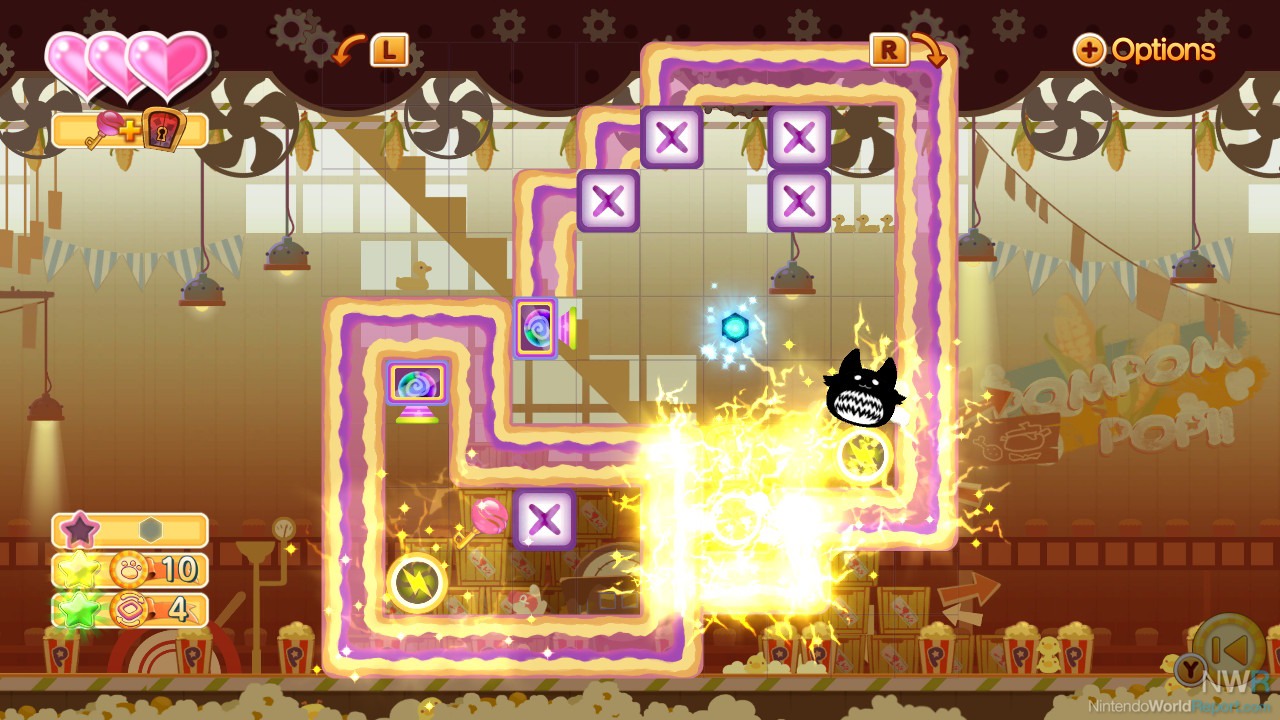 The majority of puzzling will have you turning the levels 90 degrees at a time, making Kulu fall this way or that along with a variety of objects. You’ll do this either to collect items of some kind, to trigger special spaces that have a variety of effects, or to simply get to the door that allows you to move on to the next level. If you’d like to be challenged, each level has 3 objectives of some kind that will have you either collecting special gems or completing the level within a certain amount of time or moves. If you get all 3 you’ll get a crown for the level, but these accomplishments appear to only be cosmetic and for personal pride, nothing is locked or restricted until you collect a certain number. It is possible to “die” in levels, with Kulu typically being crushed by an object of some kind, but you’ll have 5 hearts to help you still make it through successfully. If you lose all of your hearts for the level you will lose your progress to that point in the stage, being forced to start it over again. An additional feature that is very helpful (since in the more complex layouts you’ll tend to realize you’ve put yourself into a position where all moves will result in Kulu meeting an untimely demise) is that the Y button can be used to move back a turn. Making use of this can help for testing out theories, though keep in mind that even rewinding won’t bring back the hearts you’ve lost from Kulu being pancaked by something along the way.

The degree of difficulty in most Worlds usually ramps up progressively, with the first few levels letting you become familiar with the newly-introduced mechanics and the rest then having you apply those lessons in more complex scenarios. There are, however, exceptions to this and it can sometimes be odd to get stumped mid-way through a World only to then perfectly complete the next few levels following it on the first try. Continuing on the topic of things that are peculiar, there are also mechanics that will get randomly introduced for the first time in a single level, often on the last of the World, and then not show up again until much later on. Contrasted with how smoothly the majority of elements come into play this tendency is a bit odd. 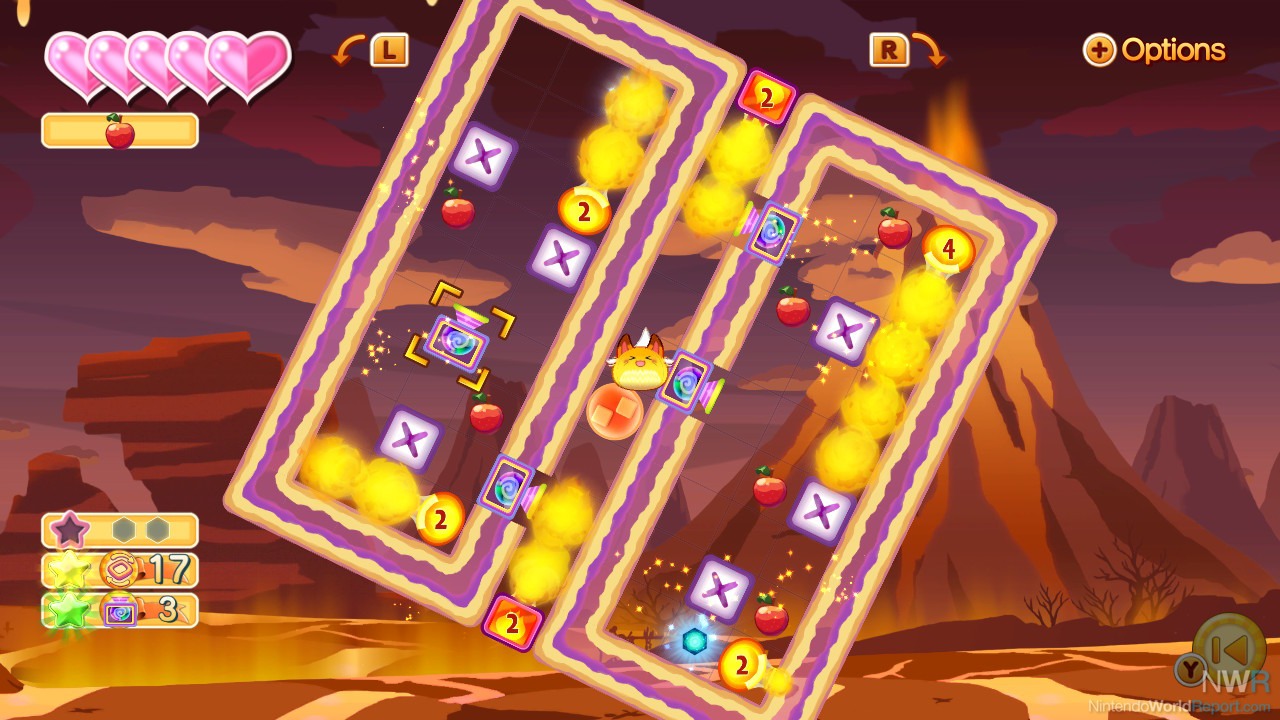 When it comes to scoring, Puzzle Adventure Blockle creates a bit of a dilemma. One positive is that it is absolutely distinct on that platform in terms of the nature of the puzzle challenges. Since it is exclusively single-player you also won’t have to find a friend to enjoy the game to its fullest, setting itself apart from most of the pack on the Switch. All of that said, because it is such a traditional puzzle game, I wouldn’t consider it the kind of experience that would likely encourage people to break out and give the genre a try. The fact is that many of the elements at play here have been done in some form before, just in this case they’ve been executed in a way that’s far more attractive than you’d typically see for games of this kind. I believe the biggest factor in deciding whether you’ll enjoy Blockle or not, if you’re at least open to getting a new puzzle game, will be the art style, humor, and look of Arika specifically. I can confidently say that I know people who absolutely would avoid the game because of her presence, though undoubtedly there are also plenty of people who will either find her amusing in some way or even benign. If you’re searching for a traditional puzzle experience, give the screenshots and some video a look and decide for yourself if it’s for you. While I wouldn’t consider it revolutionary, there’s no doubt that Puzzle Adventure Blockle is a very well-made and well-executed puzzler that is price appropriate for the right audience.