Olimar and the Pikmin trade in 3D exploration for 2D platforming. How does it all shake out? 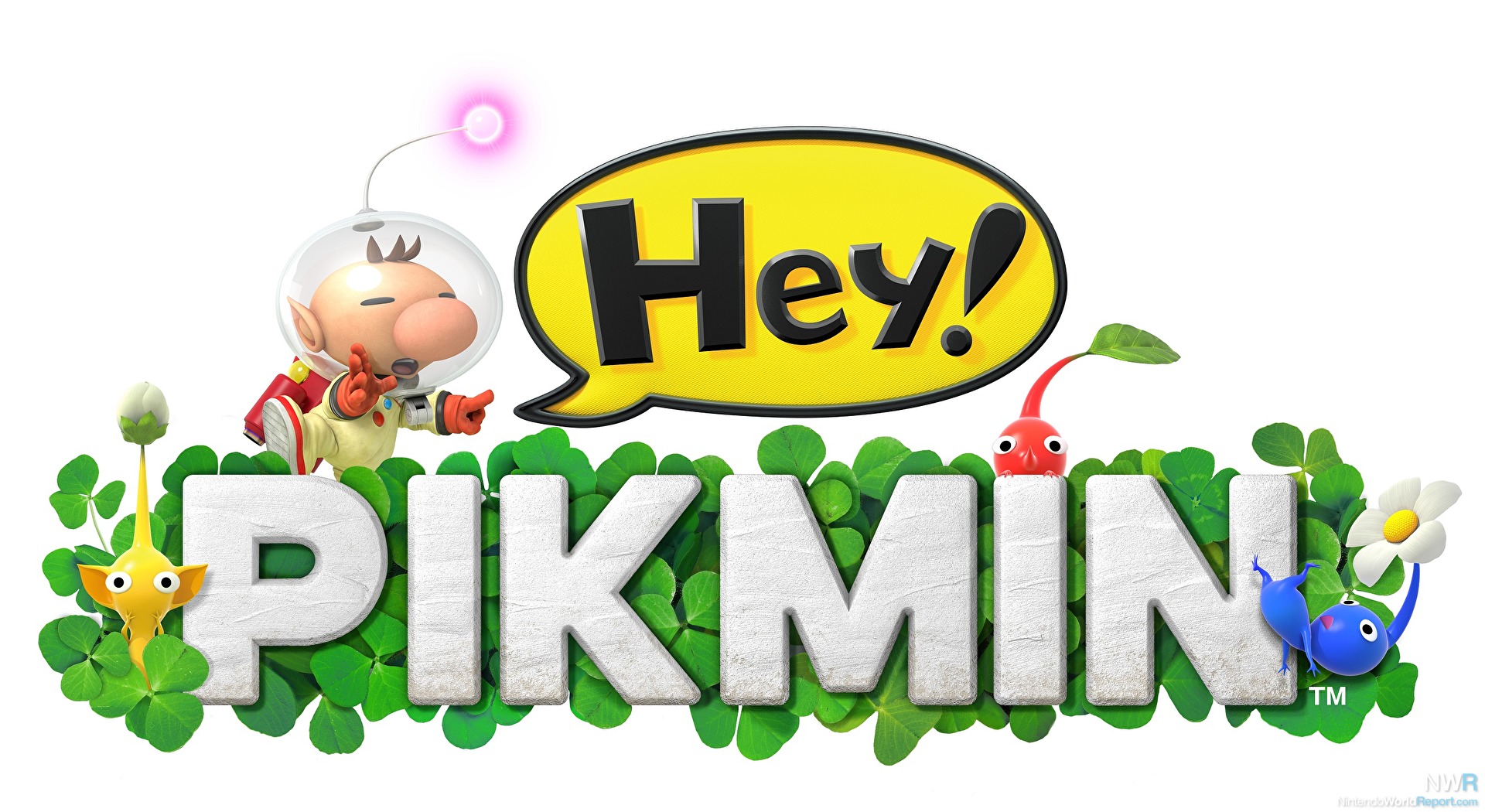 From the makers of Yoshi's New Island comes another side-scrolling platformer, this time in the Pikmin world. Unlike New Island, developer Arzest had the liberty with Hey! Pikmin to create a brand-new take on one of Nintendo's established franchises by going from 3D to 2D. By rethinking how Pikmin plays in a different perspective, this late-era 3DS game executes well by adapting familiar concepts with new gameplay design blended together by the various features of the system. 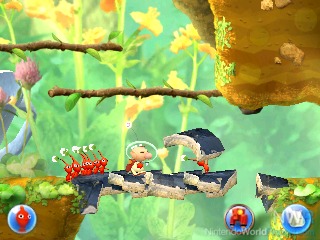 As per usual, disaster strikes and sends intrepid hero Captain Olimar on a collision course with a very Earth-like planet. Olimar has to fix his ship by working with Pikmin to collect random objects and convert them into the energy source “Sparkium.” The setup is similar to previous entries in the series, but uses a linear level structure instead of big 3D environments to repeatedly explore.

Controlling Olimar in Hey! Pikmin is simple and straightforward. Using the Circle Pad (or D-pad or, if you’re a lefty, the face buttons) you move Olimar around the levels while using the stylus to tap and throw Pikmin at various obstacles and enemies. You can view the (almost comically vague) map of the level with L or R, but really all of the control is mapped to the touch screen, and it feels just fine. 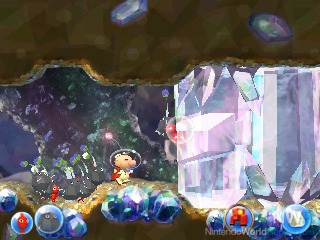 Olimar can't jump, but he does have a trusty jetpack to boost him up a small height, where he can hover and get to higher places by himself. This can offer new opportunities do discover objects and gather new Pikmin, vital to acquiring other objects and conquering the rest of the level. The jetpack feels quite clunky and is not nearly as fluid as a normal jump. But fortunately, because of the slower pace combined with the touch screen controls, the awkward jetpack never really becomes a bother.

At first, most enemies don't seem to be a big threat. Just tap away at the monsters and let the Pikmin do the dirty work. Despite its simplicity, the combat has a certain satisfaction to it that works well. Many different kinds of enemies appear throughout the game, with some more difficult to overcome than others. New enemies appear frequently, and all of them feel at home in the world of Pikmin. 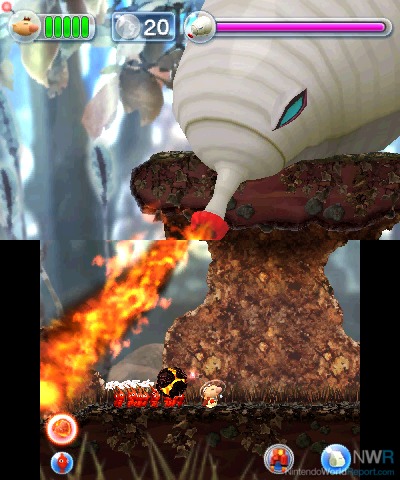 Every enemy and object is logged into your ship’s computer, and each has a funny little description. For instance, they call a nut and bolt a "metal bagel" and "lop-sided weight." Frequently I'd look forward to reading the funny translations of the treasures I found in the game. Cute humor is abundant, and most of it is in these goofy write-ups. Another charming part are the little cut scenes that happen when new Pikmin types first appear. These are very reminiscent of the Pikmin videos released a while back, and highlight the funny and colorful character of Pikmin. You'll catch them playing together, being chased by an enemy, or even playing tricks on one another, among many other humorous scenarios. 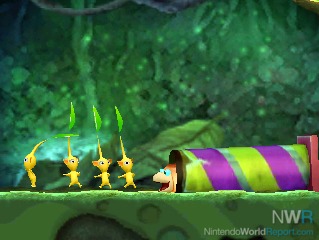 The overall difficulty of Hey! Pikmin ranges from easy to moderate. Getting from the beginning to the end isn't exactly a stiff challenge, but collecting all of the treasure can test your abilities greatly. Completing puzzles and acquiring treasures are filled with a lot of "Oh, I didn't know that Pikmin could do that!" moments, which help to scratch that puzzling itch. At the start, the levels are quite simple and straight-forward, but the deeper you get, the better and more complex the levels become. Many secret areas, exits, and even whole levels are available to track down in each of the sectors. Exploring each level thoroughly can help you find hidden nooks and caves just out of sight.

Learning and using the various Pikmin abilities allows for a lot of fun and experimentation. The abilities of new Pikmin you discover get better and can lead to drastically different challenges and concepts. The further I got ,the more fun I had, which was a good feeling. 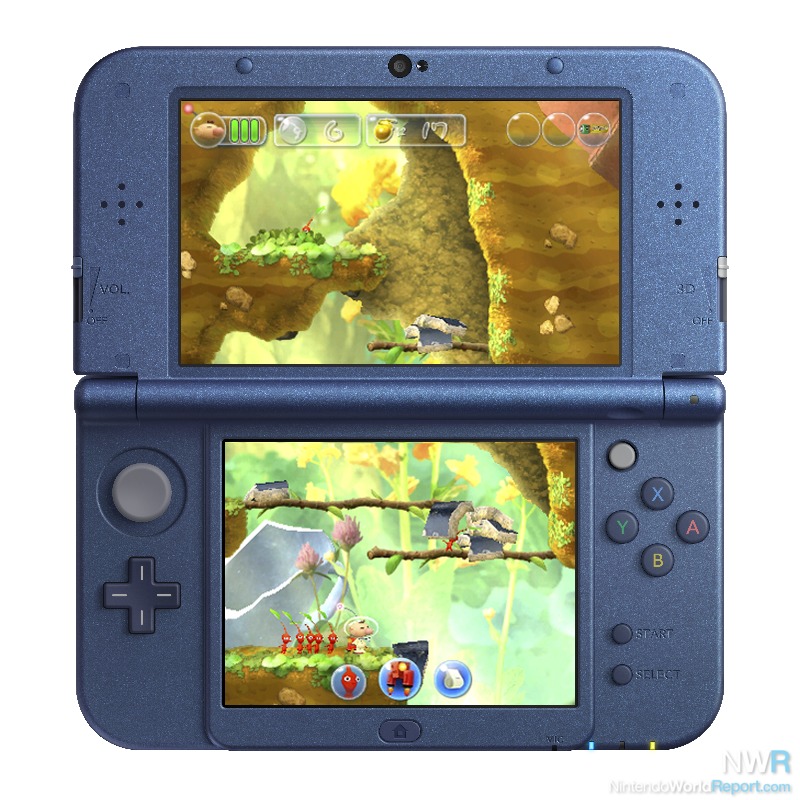 The visuals in Hey! Pikmin are very different from your normal Pikmin game. Gone are the days of photo-realistic environments, for Arzest went for a more colorful and painting-like aesthetic. Most parts are absolutely gorgeous, but some parts can leave more to be desired. Overall, I really enjoyed the tones of each aesthetically different sector. The way each level is designed for the two screens of the 3DS feels unique and is a crucial part of the puzzle solving and exploration. The excellent music soundtrack helps to set the mood for each level and boss, and the sound effects of gathering and throwing Pikmin sound nice and nostalgic for seasoned Pikmin players. The frame rate, however, does not hold a steady rate and drops frequently. It never drops to the level of being unplayable, but the inconsistency is disappointing. Being a touch-screen-controlled game, it also does not offer stereoscopic 3D support, only subtracting from the overall look and feel. 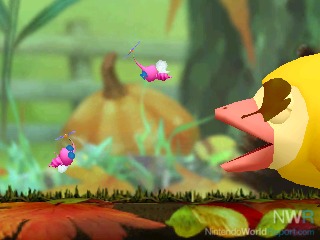 In addition to the main game, there’s a little side mode called Pikmin Park. Every time you complete a level in the campaign, all of the Pikmin that you gathered go into the park, where you can send them to various locations to gather more Sparklium. Every once in a while your Pikmin crew will find a stash of Sparklium seeds (or even some treasure) to add to the grand total. This mode shows off some 3D environments reminiscent of the original Pikmin games, but the gameplay is rather dull and slow. The amount of Sparklium you find rarely seems to greatly impact your total amount, and little skill is required. Even though this part can be a little boring and uninspired, sometimes it can serve as a break from the main style of gameplay.

I had my doubts about whether I would or would not enjoy Hey! Pikmin before playing it. Ever since Kirby: Mass Attack came out, I always dreamed of a similar game concept but in the Pikmin universe. When that very idea was revealed last year, I was extremely excited to literally have my dream come true. Hey! Pikmin ends up being a nice spinoff of the Pikmin series, adapting many of the original elements into a platformer/puzzle game. It’s flawed but it sure is fun. A better framerate and higher difficulty would be great, especially since I feel like the different Pikmin abilities still had a lot of untapped potential. This installment ends up being a nice new creation that fits into the franchise in a different way than older Pikmin games. At its core, though, Hey! Pikmin is a fun game, and in the end, that's all that really matters.

Played through the whole campaign mode.

The Pikmin are so cute, I'm glad they are getting more games, good to hear this one is decent too. I'm still planning to play Pikmin 3 on Wii U first though.

I've been keeping my eye on this one. Pikmin is one Nintendo series that has never clicked with me, but this one looks to be right up my alley!

I've liked Yoshi's New Island (though the original and Woolly World obviously blow it out of the water), Chibi-Robo: Zip Lash (which I really liked as a 2D platformer), so hopefully I'll enjoy the developer's latest as well!

I think I've seen a comment somewhere about this game that it doesn't actually have a 3D effect if played on a 3DS. Is that true or just rumor?

I'm glad to see that reviewers are pretty positive about this game. I've been interested in it since it was revealed and, although some people were nervous about Arzest as the developer, the more bits I've seen of the game then the more my hype has been pumping up for it. Although I'm tempted to plunk down the cash for it now, I'm still going to listen to my frugal side and wait to see if I can get a bit of a deal for it down the road since the one gaming splurge I know I'm going to make is Metroid II 3DS when it releases. However, just the fact that I'm tempted to get it now means the game has done its job and been more successful compared to plenty of other games that I feel no immediate impulse to buy.

I dont want to play it, but it sounds like it would be good for my 7 year old nephew

I think I've seen a comment somewhere about this game that it doesn't actually have a 3D effect if played on a 3DS. Is that true or just rumor?

Having seen the game in action in a demo unit, I can confirm there is no 3D effect. I guess it wouldn't make sense with the action jumping across both screens to have your eyes jumping from 3D effect to none effect. Never clicked in my head about the 2 screen action. I suppose if I had bothered to download the demo and play it on my 3DS then I'd have known the answer to this question already as well. Plenty of ways to have figured out the answer. So, dumb question all around now that I think about it. 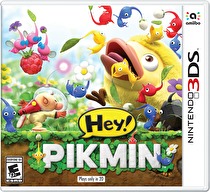