A lot of Nintendo players probably missed out on Shantae: Half-Genie Hero when it first released, since it came out the Tuesday before Christmas, and most Wii U owners had visions of Switch dancing in their heads at that point. But Shantae’s crowd-funded escapades made a quick transition to the Switch, and it’s a fun romp with a lot of potential replay value. 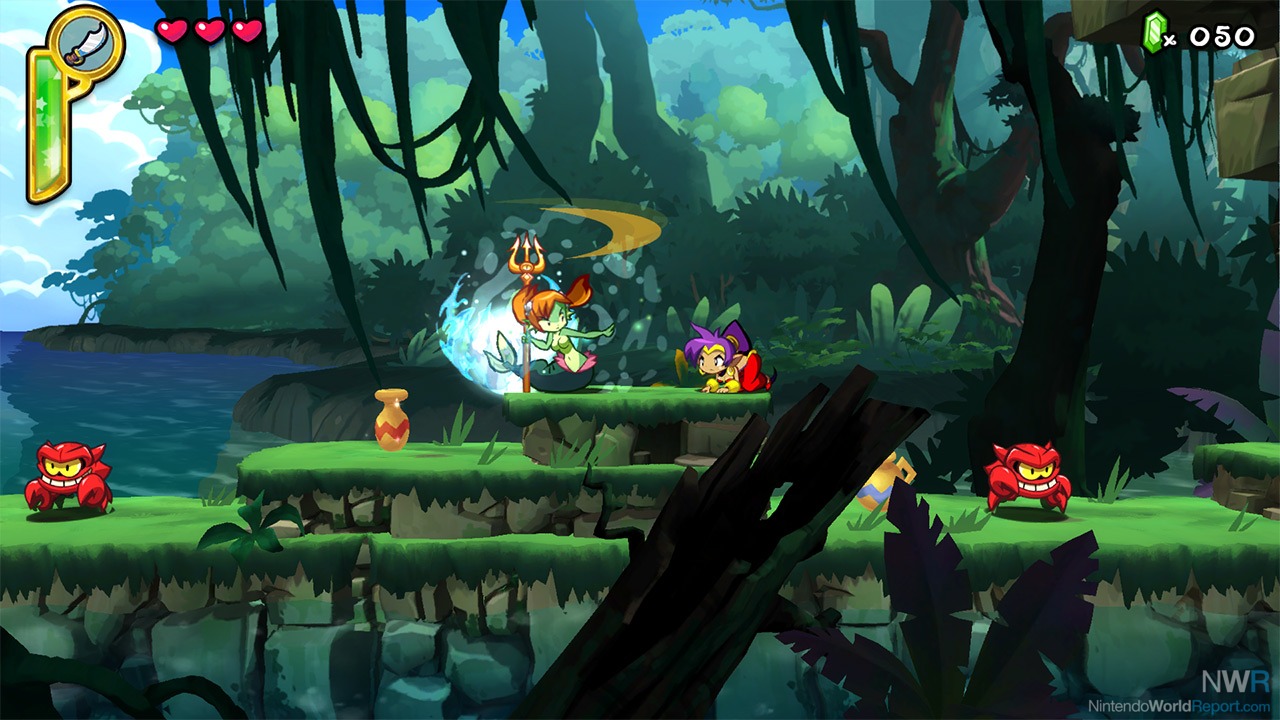 The storyline will be familiar to longtime fans, with plenty of callbacks to the past two games in the series especially. Shantae is Scuttle Town’s resident genie, and after Main Street is attacked, a new genie comes into town to try and move in on Shantae’s turf. Mild fetch questing ensues as Shantae is also trying to help her scatterbrained uncle develop a new machine, using parts strewn around the six or seven worlds. This will result in backtracking, but repeat visits will be quite different than the initial jaunt, as Shantae will pick up new powers as she goes. If wasting time is a concern, the levels aren’t that long and shuttling between the different sections of the levels takes no time at all with the right powerups.

Half-Genie Hero runs smooth as butter on the Switch; I didn’t notice a single framerate drop the whole time, even when rapid-firing the hair whip in both docked and handheld modes. Sometimes I would want the game to slow down slightly, as the dance to change forms eventually cycles through three pages of powers really quickly. I did get used to it eventually, but it took a bit more practice than usual to get the timing down. Changing magic spells can also be done on the fly, which is quite handy for those bosses that need to be killed with fire.

Although the main game is short – there’s a prize for beating it in under four hours – there’s a speedrun mode and an even harder difficulty that both offer some interesting looking concept art. I did a slow run, getting everything I could that didn’t involve replaying stages for money, and want to go back and give the speedrun option a try down the road. The transformations are a blast to use, and there were a lot of “Wait a minute...” moments when I unlocked things like the crab claws and the bat form. Shantae also looks fantastic, and the music nails the atmosphere of the various stages.

Some of the meta-humor in Half-Genie Hero had to be explained, since this happened to be my first Shantae game. It definitely won’t be the last – I’ve got all four now on various Nintendo systems, and I’ll definitely dive into the ones I’ve missed. But you never forget your first, and I’m definitely “RET-2-GO” if WayForward brings it back.

A copy of the game was purchased by the reviewer.