Grezzo takes their background in Zelda and Mana games and blends it with everything from Animal Crossing to Actraiser for a 3DS masterpiece. 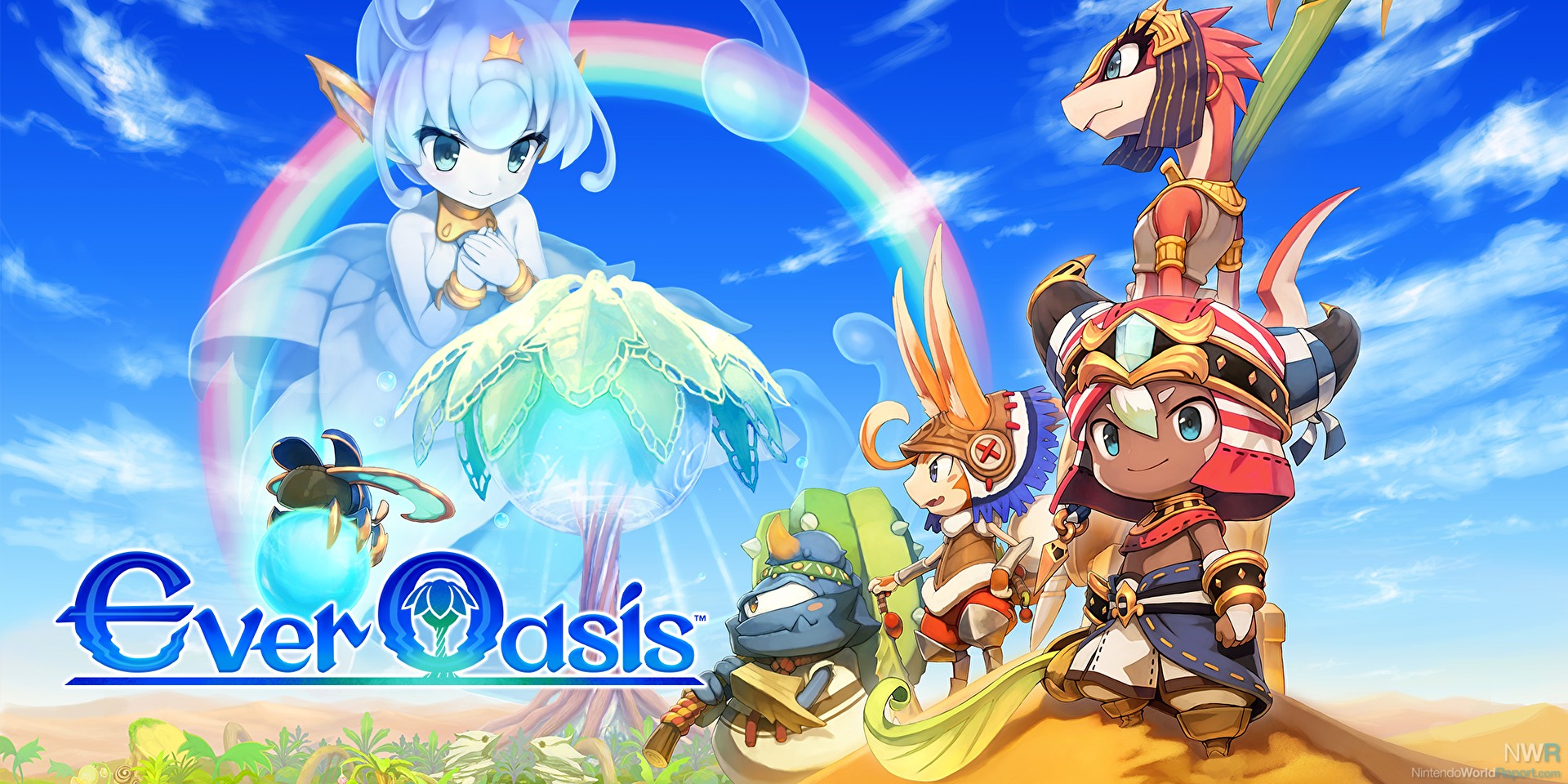 After years of working with the Zelda franchise on the 3DS, developer Grezzo finally has the opportunity to step into the spotlight with their own world in the game Ever Oasis.Taking what they’ve learned from remaking classic 3D Zelda and combining it with director Koichi Ishii’s past experience on the Mana series, they have spawned a unique and diverse experience. Offering numerous elements found in a variety of genres such as RPG, action-adventure, town building, and even farming, Ever Oasis offers plenty to do. While it isn’t without a few hiccups along the way, this is one oasis you won’t want to pass up.

Ever Oasis starts off by introducing you to a beautiful town bustling with life, but this world is quickly ripped to pieces by Chaos, something you’ll be dealing with throughout your adventure. The main character is all but doomed to perish alongside the oasis, but luckily his (or her) brother takes the devastating blow. Lost and distraught, the protagonist does the only thing a seedling knows and starts the search for a water spirit to build an oasis in honor of the brother. Luckily it doesn’t take long for him to meet a water spirit named Esna. Quickly forming a tight bond, the two work together to cultivate an oasis where beings of all races come to spread happiness and take aim to stop the spread of Chaos.

Expanding your oasis is a focal point. You start out as a tiny haven and grow into something spectacular as your budding villa swells with residents, shops, and more. This all makes for a nice, rewarding loop where you recruit residents that can open up shops that in turn attract new residents. Each uniquely designed potential inhabitant can be discovered and acquired in different ways, with some of the more common ways being completing light fetch quests and designing your town in a specific way. 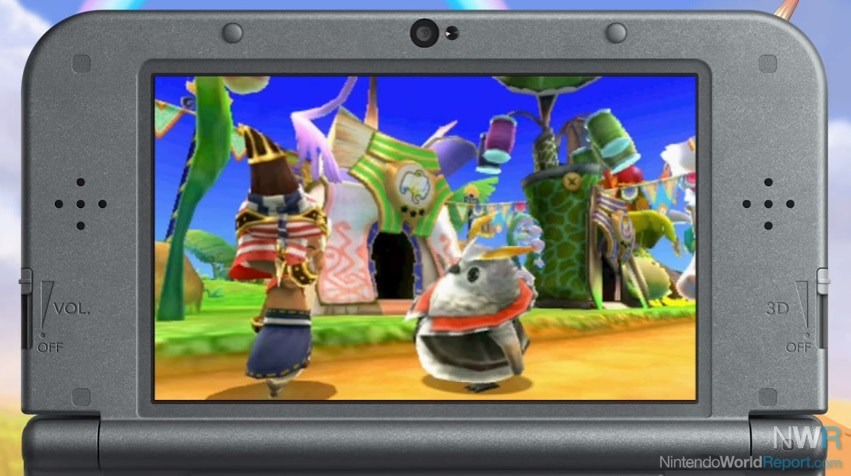 While expanding your oasis is vital, journeying outside holds even more to do. Keeping your shops stocked with supplies is something you, as the chief of the oasis, have to regularly do, whether it’s with materials you found while exploring the desert or things you can develop in town, usually at your garden. The latter starts off small, much like the oasis, but grows bigger as you progress. In the early stages it’s easy to manage restocking and gardening, but as more stores pop up, it can become overwhelming. Luckily, just around that point, a new citizen comes along that automatically restocks the stores for you without having to visit each individual shop and even allows you to delegate gardening duties to another townsfolk, freeing up your schedule to explore the world outside your home.

Time not spent expanding your oasis is spent out in the desert gathering materials, meeting new creatures, engaging in combat, and exploring different caves and dungeons. The combat system is simple yet satisfying, as you roam the world with your hero and up to two residents. Primarily, just three buttons are used for a light attack, heavy attack, and a dodge. As you and your citizens level up, combos and buffs are unlocked that help deal out massive amounts of damage and give you a little more to think about when approaching an enemy. Specific weapons are tied to different types of villagers, ranging from swords and hammers to bows and bolas. Each weapon style plays differently and that, mixed with the ability to switch between your trio on the fly, helps keep combat fresh throughout the 20-hour adventure. Ever Oasis also offers a robust crafting system, which helps keep your party members decked out in the best gear. You’ll be able to purchase items at different merchants you encounter in different settlements, but unlocking designs and crafting items tends to yield the best results and can help your team take down enemies more efficiently.

While Ever Oasis offers a ton of varied gameplay elements, where it really stands out is in the dungeons. These are much bigger than the caves you’ll encounter throughout and offer more complex puzzles with tougher enemies, each culminating with a fantastic boss battle. The puzzles aren’t over the top difficult, but are clever and fun to complete. Enemies start to have more tricks up their sleeves that you’ll need to watch out for and later on, even regular foes can deal devastating damage if you’re not careful. One gripe I had with the puzzles is that they often require certain skills that not every party member possesses, forcing you to retreat back to town to grab the proper inhabitant. Thankfully, you can instantly teleport back to the oasis to switch your lineup and then return exactly where you left off, making what could have been a real hassle just a minor annoyance. 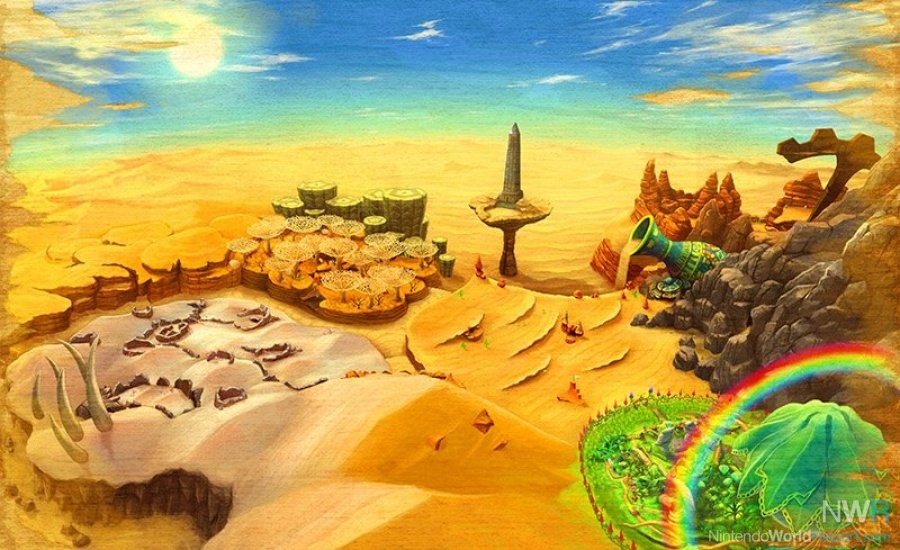 Grezzo did a wonderful job bringing the world of Ever Oasis to life. Graphically, the game looks great from the charming character models to the deserts, caves, and dungeons. Some of my favorite moments were looking out into the distance and seeing a huge jar pouring sand onto the dunes or a big genie lamp stuck in the sand behind one of the settlements. While it didn’t bother me, the overlaying theme is based heavily on the desert, so naturally many of the areas have lots of sand and cactuses that could get repetitive. It’s very relatable to Super Mario Sunshine in the sense of taking the theme and stretching it out over the course of the full game, but managing not to repeat too many of the same elements. However, that’s not to say you won’t be treated to lush environments such as the forest and, more notably, your oasis, which blossoms with vibrant colors. All that mixed with the thematic soundtrack makes for a nice spectacle.

Since its reveal at E3 2016, Ever Oasis has been one of my most anticipated releases. With anticipation comes fear of a letdown, but fortunately Grezzo succeeding in alleviating those fears by delivering a truly superb experience. It’s filled with so many things to do, but in a way that feels anything but forced and overwhelmed. Instead, everything works together in harmony to make a truly deep and engaging game that's easy to recommend to anyone.

Ooh! Learned some new things about the game from this review and others being posted. I definitely think it would work well with my style of gaming. I think I will certainly pick this up tomorrow! Thanks!

Ill probably pick this up since it has lots of different elements which work for me as a player. Most likely at the start of July though because money is slightly tight.

Im very happy its good. I have been wanting to play it since it was first shown last year. Te demo was really good too.

You forgot an important con: No co-op. 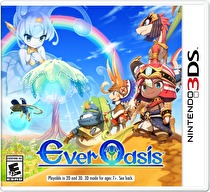