An action game where you’re basically Nightcrawler from the X-Men.

The elevator pitch for Mr. Shifty, a new Switch eShop game from tinyBuild, sums up the game succinctly: it’s like Hotline Miami if you played as the X-Men’s Nightcrawler. To elaborate, Mr. Shifty is a top-down brawler where you play as a teleporting thief who bamfs all over the place, dodging gunfire and obstacles in the hopes of landing enough punches and damage on the hordes of goons to survive. Fast-paced and set to a bumping soundtrack, it’s an engaging romp when the action stays hot. 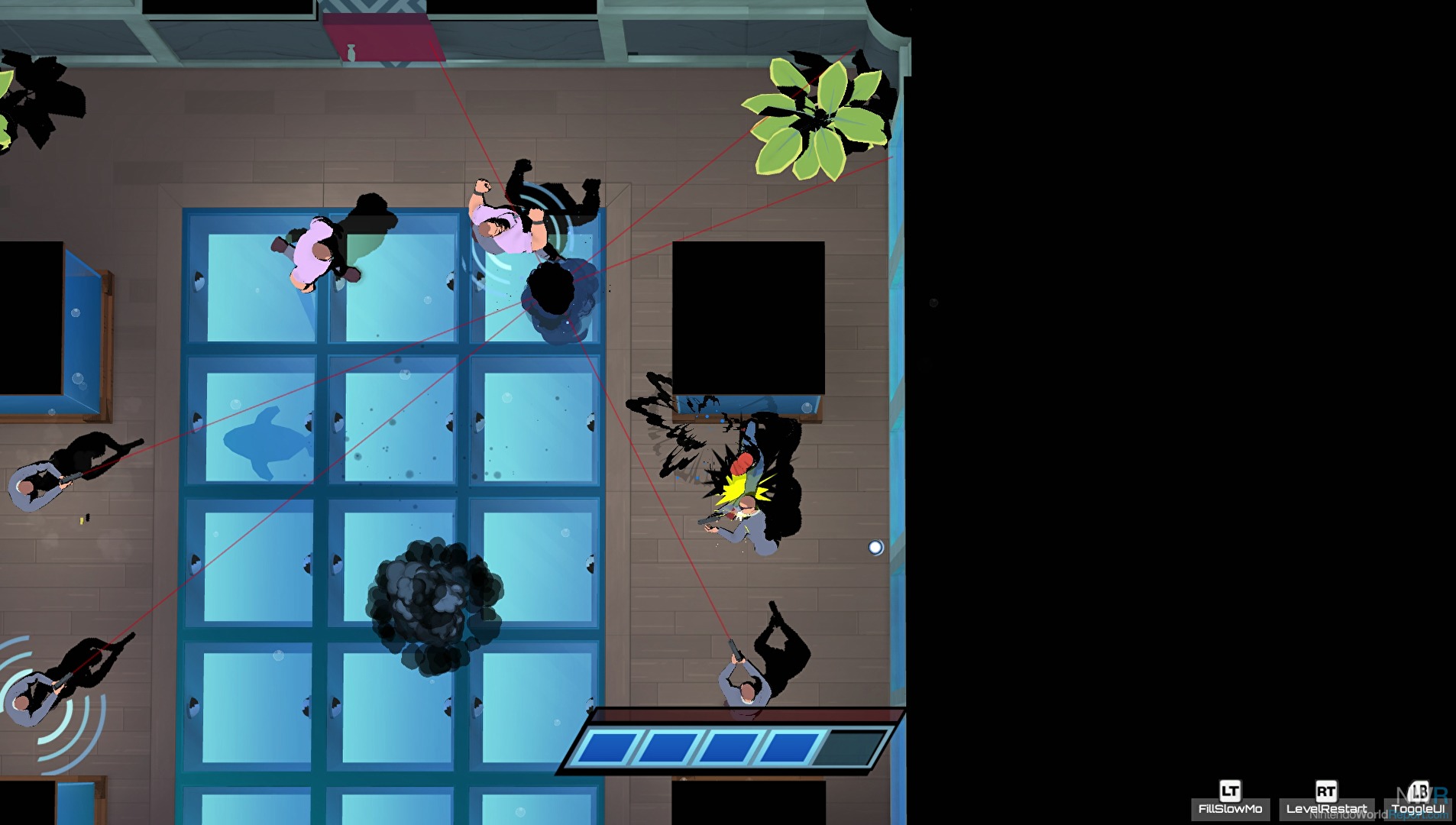 It is set in, according to the lore, the most secure building in the world. Your task as the heroic teleporter is to break into the veritable fortress and steal some Mega Plutonium. As is wont to happen during fictional heists, things go sideways and what started as a simple snatch-and-grab becomes an expansive war against the villainous Chairman Stone. The war never leaves the confines of the monolithic building, and each of the stages takes place on a floor inside. The stages are made up of a variety of winding rooms that task you with killing all of the enemies or solving a puzzle.

As a single hit brings you down and you are one man against many, combat is reliant on smart planning and quick thinking. Punching is done with the press of a button, with most baddies requiring two or three punches to take down. Items are also strewn about the environment, and those can give you greater stopping power as you throw a vase, frisbee a shield, or swing a mop. The main hook of Mr. Shifty is the teleportation, though. You can use it to avoid fire, jump through walls, and confuse your enemies. Spamming teleport isn’t an option as you only have five teleports, though they regenerate quickly. That helps balance the overpowered nature of the mechanic and forces you to be smarter with your deployment.

The endearing novelty of teleportation helps mask some of the deficiencies of combat. With the exception of a few stand-out items, namely the projectile trident and the aforementioned shield, the others don’t add too much fun to the fight outside of more power. Items function more as a means to an end then any sort of triumph. Still, that trident is awesome. I threw it at three guys and impaled them on a wall. I just wish the other items touched that brilliance. The sheer joy of teleporting is highlighted strongly during the portions when you are barred from doing so. The game slows down when you have to punch through a wall or slowly walk around when you’re powerless. Thankfully, those are only short stretches. Even with the minor quibbles, teleporting combines with the combat to make for a creative fervor as you try to beam all around the map to wreak havoc. Unfortunately as mayhem ensues, the game hiccups and the framerate drops. It only was problematic a few times, but I was killed a few times because of the slowdown. 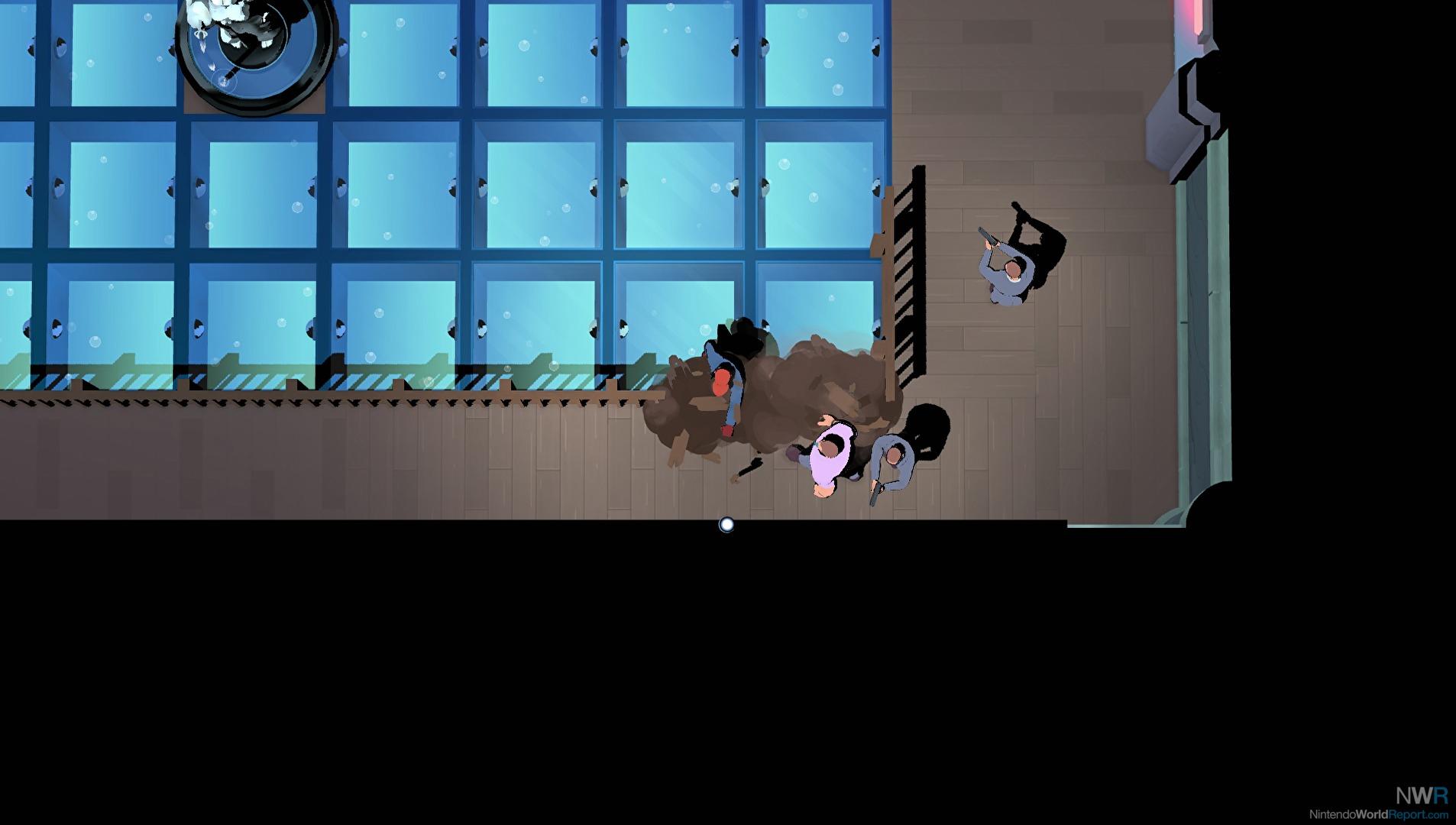 Occasionally, the combat sequences are joined by environmental obstacles, adding in a bit of a puzzle element to the experience. For example, an adversary could fire a heat-seeking rocket that you then have to lead into blowing up a wall so you get to the next area. These fusions of combat and puzzles lead to some rewarding moments, especially when you figure out a crazy way to blow up a room full of foes. Remove the combat from these situations, however, and the experience dips considerably. One-hit deaths when you’re in frantic, inventive combat is fine. Even upon repeated replay, you can usually approach it differently to keep the experience fresh. One-hit deaths in combat-free laser grid hell is a dull, repetitive grind. Combat is, fortunately, a grander focus, especially as you get near the manic last few levels.

Mr. Shifty is a straightforward, focused caper with little fluff that will last you a few hours as you climb through 18 stages. What it lacks in length its makes up for with a dynamite gameplay hook. Teleporting is incredibly neat and opens up a lot of daring and rewarding circumstances where you can mow down foes. As long as you can overlook the handful of moments where the combat isn’t the focus, Mr. Shifty is a great addition to the young Switch eShop.

Second Opinion by Justin Nation: I’m inclined to pretty well fully agree with Neal on pretty well every count, but wanted to add some issues and disappointments with a game that I really did enjoy but just had higher hopes for.

First, if you watch the video I captured the stutter isn’t that infrequent and it can both be odd and annoying. At first I thought it was a deliberate delay when you knocked people out to slow down the action, and sometimes I think it is on purpose for that reason. When it happened when there was no action at first I thought perhaps it was because someone was dying out of my immediate view since that does happen for a variety of reasons. Then I began noticing it for random and seemingly unexplainable reasons just when moving around or doing something. My hope is that this is a known issue and can at least get a patch to reduce it. (Note: The devs are aware of this issue and are saying that it will be patched at a future date)

Second, for a game that I’d held out hope for some strong replay value with, arcade brawler-style, it really doesn’t deliver that at all. Once you complete the 18 levels your only extended play option is to revisit the levels in full, trying to improve your time and lower your death count. As Neal noted, the connective tissue between the very engaging and entertaining fights is a bit hit or miss and especially if my goal were to complete the level with 0 deaths that could be a tall order probably somewhat out of my control aside from pure grinding through it over and over. Since there’s no support for leaderboards or anything else I can see even this would seem to be without much of a point. With this really solid fight engine I’m sad to see there isn’t some sort of endurance mode that could have used a pretty stock arena set-up, pushing me to survive wave after wave of enemies for time and score. Throw a few scenarios like this and a leaderboard at me and I’d have gladly spent quite a few more hours taking in more of what is actually a pretty great fighting engine overall.

Third, there are absolutely a few spots in the game where I simply had no idea what to do and it was frustrating for seemingly no good reason. When you get to the point in the game you’ll likely know it, just know that when all else fails you just keep punching like the wall has the face of Crash Bandi-Poochy on it. You punch because it feels right, and eventually you should be OK. Puzzles are good, sequences where you can’t reasonably assume what you should do aren’t always so good.

Lastly, I won’t fully detail the sequence of events but I will say that after SO much build-up and challenge to get to the very end of the game the final fight wasn’t even remotely fair or interesting. While it would seemingly be invigorating to completely own the final boss I must say that as the credits rolled all I could think was “WTF just happened!” Just ending it all on a sad note knocked me down from the thrills that had gotten me there.

For what it sets out to be, and the price point, if you’re looking for an engaging brawler that will test both your reflexes and your wits Mr. Shifty delivers some pretty solid goods. While it has issues that keep it from being easy to recommend to anybody if the game looks like it has elements that appeal to you it should reasonably deliver the what you’re looking for, even if it feels like it doesn’t quite live up to its potential.