It feels kind of weird to proclaim that the worst thing about Snipperclips is that it ends, but that’s the truth. I was mesmerized by the charming aesthetics and intriguing shape-cutting puzzle-solving gameplay. For 45 levels, this Switch launch title is outrageously inventive and creative, throwing a wide variety of innovative and engaging puzzles at you. Nearly every puzzle presents a new challenge that can be solved in a wide variety of ways. It’s, for the most part, totally magical. 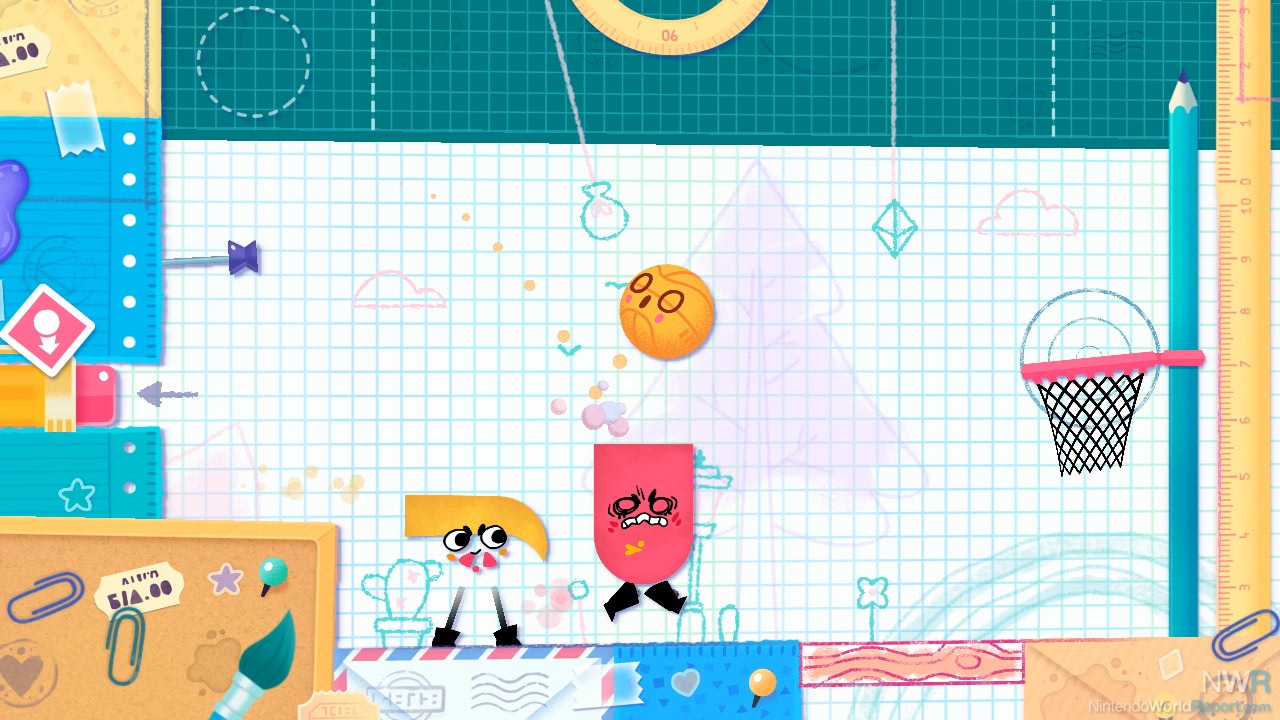 The core of Snipperclips is in a two-player main mode. In there, you control two little paper creatures that can move around a single-screen environment to try to solve a puzzle. To complete these tasks, you have to work together to cut each other into shapes that can be used to fit into a space, flip a switch, catch a ball, or solve some esoteric task. Everything about Snipperclips crystallizes early on, when you hit a great run of levels that encourage experimentation and varied styles. Maybe to catch a basketball, you sit below where it drops after your buddy cut out a rounded hole in your head to catch it and easily transfer it to the basket. Maybe you try to precariously ricochet the rebound to try to get it to land in the net. Maybe you’re trying to place a pencil in a sharpener, you perfectly get cut to hold the pencil and carry it to its destination. Or you just maniacally try to move around the stage and bounce that damn pencil to meet its sharpened end. It’s near-endlessly inventive. A few late-game challenges do seem overly reliant on one-solution puzzles, killing a little bit of the creativity, but that could be chalked up to me not being inventive enough to find a different way. 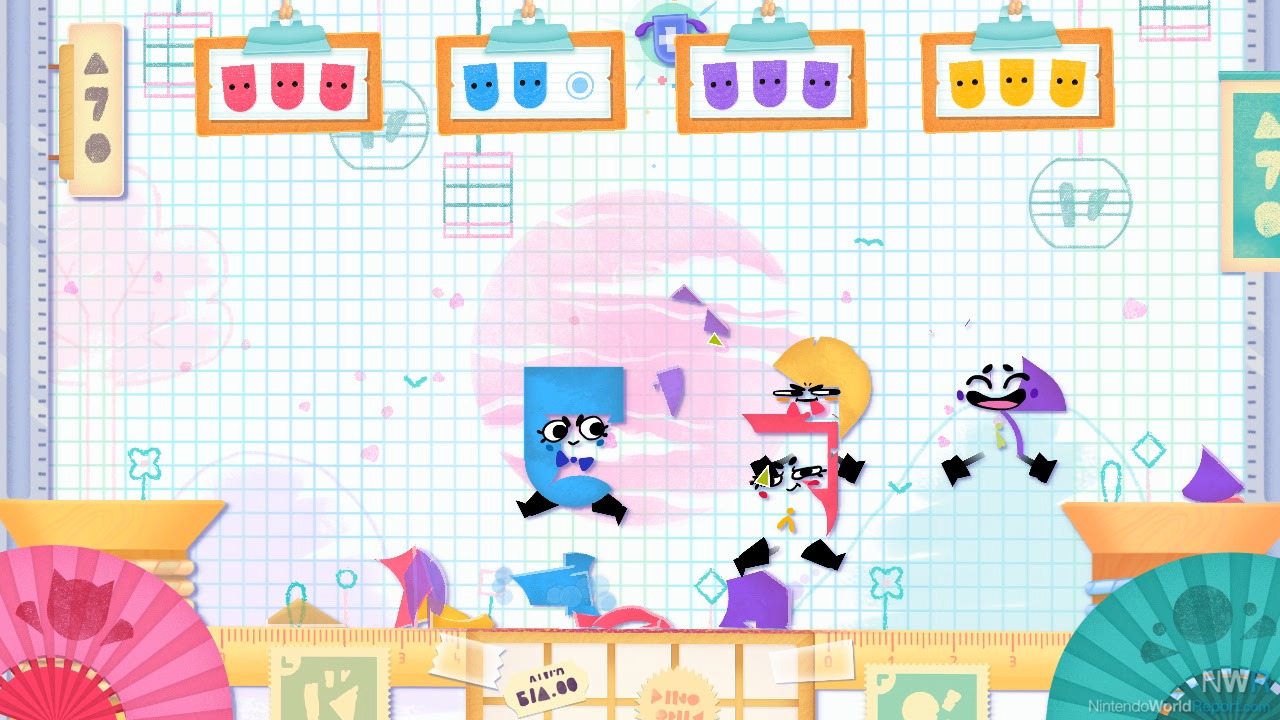 Trial and error is the name of the game, especially in later levels, which can occasionally lead to some frustration. On occasion, a small late-game blunder would make me have to restart an entire puzzle, which when trying to work together with another person, can lead to some terse moments. However, the reward of figuring out a puzzle and successfully executing on an idea is unmatched. I might have beat my head against a wall for 10 minutes, but dammit, when that firefly got into its new home, I cheered.

The main mode is best played with two players, though it can be played with one. In single-player, you control both characters (by swapping between them at the press of a button). This works far better than I expected, and while a little of the creative magic is lost without a second mind to bounce ideas off of, it all works beautifully nonetheless. No matter how you play it, the main campaign ends far too quickly, after three worlds with 15 levels each. Fortunately, Snipperclips has some other modes that continue the themes of goofy puzzle-solving mayhem. 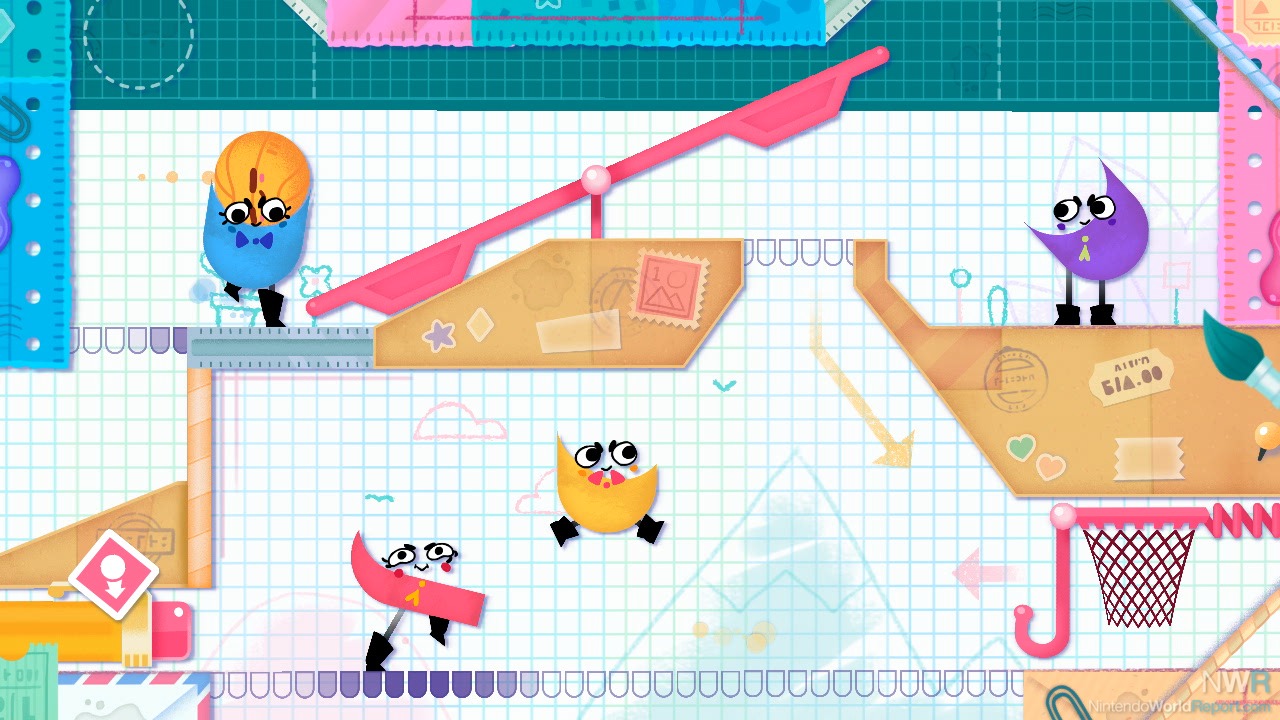 Party mode supports anywhere from two to four players and throws you into modified puzzles from the campaign to mess around with and experiment with more characters. The two-player support in this mode requires players to each control two characters. Battle mode lets you choose from three different competitive modes, which work to varying degrees. Hockey is nuts, working well with anywhere from two to four players. Dojo is a fighting mode where you have to frantically cut your opponents before they cut you. Hoops is a basketball mode that seems to be nearly useless with just two players, but is a true test of teamwork and cooperation with four. These modes aren’t as deep or substantial as the 45 core puzzles, but they make for a surprisingly good multiplayer time, as they hit the right balance of dopey fun and puzzling skill.

No matter how you cut it, Snipperclips is a gem of the Switch eShop, presenting a fresh puzzle experience that is daring and delightfully peculiar. If we’re all lucky, Snipperclips will take off and become the next Pushmo or BoxBoy from Nintendo, showing up every year or so with new puzzles and wrinkles. If you’re looking for a game to compliment Breath of the Wild, this is a grand one.

It really is a great game. Perfect for the Switch