Competent and playable, but not really a superstar.

Mario Sports Superstars comes at a weird time. We've seen most of the important sports on the Nintendo 3DS, so the game has a knock against it. That doesn't mean that it was doomed from the start, but the title needed to do a lot earn my trust. The majority of the time, however, Nintendo was extremely silent on the game. It was only in recent weeks that a few trailers for Mario Sports Superstars popped up. The problem is that those arrived after I already played it. The experience was sobering to say the least.

The main thing that rubs me the wrong way is the focus on ''realism''. Because yes, a plumber and his friends playing sports are obviously the pinnacle of realism. All joking aside, Mario Sports Superstars doesn't exactly try to charm the player. When compared to other Mario sports titles, this game plays it straightforward and focused. There are a few special moves, but their role feels more as a way to show that this is still a Super Mario game. Outside of that, it feels like a collection of sports sims. Even the Mario & Sonic games offer more of a light-hearted atmosphere.

So if the focus is on realism, how do the different sports perform once you take the pitch/field/track? Well, Mario Sports Superstars is competently put together. The five sports to choose from are Football/Soccer, Baseball, Tennis, Golf and Horse Racing. You can pick a sport, select the options you want and quickly hop into a game. It’s extremely easy to get into the game of your choice.

The sports offer similar feature sets. In singleplayer, you can compete in four cups that test your skills. It starts out simple with the Mushroom Cup, but once you reach the Champion's Cup, get ready for harsh CPU opponents. If you can complete this task, you will get a couple of rewards. The last course/stadium/set of tracks will be made available, you get access to a secret character and you will get a Star Character of the one you used. In a very disappointing move, the unlocks aren’t universal as they only apply to the game you completed. This is a horrible process that is only there to lengthen your playing time. If you do want the Star characters instantly, your only option is to purchase a bunch of amiibo cards. They are sold separately and the characters inside of it are completely random.

Aside from the cups, you can partake in single matches or duke it out in training modes. This means different things for each game. Golf gives you access to various shot practice challenges, while Horse Racing and Baseball focus on a more freeform sessions that helps you understand the mechanics better. They are neat to have, but they don't do anything particularly new. Most of these things can be found in other games, but they add a little replay value to Superstars. Multiplayer features multi-cart local play (no Download Play option) and online for both friends and random players. The latter two are perfectly executed in my limited experience and can be enjoyed without a hitch.

Finally, let's talk about the sports themselves. With Golf and Tennis, the problems are quite obvious. Camelot has pretty much copied their work from Mario Tennis Open and Mario Golf: World Tour and applied it to this game. For those who haven't played those titles, it will likely not bother you as much as it might bother veterans of those games. Personally, I find Camelot's individual efforts on Nintendo 3DS a whole better as they made compromises here. The user interface, control options, some of the music and the character animations after each hole in Golf are staight from World Tour. Next to that, there are four courses with just nine holes each. With Tennis, it is a similar affair as well. Various elements are staight up lifted from Open, but with the added benefit of having no different stadiums. Mario Tennis Open offers different stadiums, options and even some unique minigames.

Football/Soccer and Horse Racing are the most component elements of this collection. Football has opted for a more conventional 11-on-11 game. There are the staples of the game – throw-ins, realistic-feeling free kicks – but with a bit of a twist. The team that controls the ball long enough will see the ball glow, then engulf itself in a dazzling array of color to set up a special move. The AI plays well in this mode, as I usually found myself dealing with 2-0 scorelines even after the first few matches. Horse Racing is fun, but the controls take some time to get used to. They are sort of floaty, but never quite unworkable. There are four cups with three tracks each, which is good for the most original element in this game. Unlike a regular racing game, you can't really sprint ahead as the best way to win here is to ride someone else’s slipstream. Slipstreaming motivates the horses and helps them conserve energy down the stretch. By making clever usage of dashes, jumps and the special Star Dashes, you will become a champion in no time flat.

Baseball is the most disappointing sport of the bunch. Baseball in Mario Sports Superstars is basically pressing the A button repeatedly, as either the batter or pitcher. The only control option besides the A button is the ability to move in the batter’s box, or change the type of pitch thrown. After the pitch, most baserunning and fielding is handled by the AI. You can decide to do all of the actions on the field manually, but the fielders will still pick up the ball themselves. The only extra action is that you need to throw it another player. It doesn't exactly make the game more exciting, so I usually kept it all automatic. The teams and stadiums have fun designs, however.

Where Mario Sports Superstars ultimately falters is it simply didn’t do much to stand out. I’m sure that some will get enjoyment out of this game, but the lack of charm made me not motivated to play it. I toyed around with some of the tournaments, played the minigames a whole of bunch and tried some multiplayer matches. At the end of the day, it didn’t really wow me at all. Horse Racing and Football were at least neat and I played them the most of the five sports. Outside of those, there was barely any real drive here to get them all checked off and finished.

As someone who didn't buy the previous Mario Tennis or Golf games on 3DS, this sounds more appealing than the final score suggests. Stripped down versions of those games packaged with a few other diversions for good measure sounds good enough for my casual interest in the Mario Sports series.


Hmm... but probably after a price drop, if one ever happens. (There is a reason I didn't bother buying the full Tennis or Golf games, after all.)

As someone who didn't buy the previous Mario Tennis or Golf games on 3DS, this sounds more appealing than the final score suggests. Stripped down versions of those games packaged with a few other diversions for good measure sounds good enough for my casual interest in the Mario Sports series.


Hmm... but probably after a price drop, if one ever happens. (There is a reason I didn't bother buying the full Tennis or Golf games, after all.)

Definitely get Mario Golf: World Tour. I think of it as the best Mario Golf game. :) 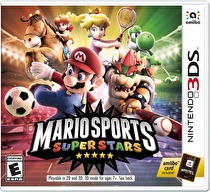