No online is baffling, but Tank Troopers is still a fun 3DS eShop experience.

It’s been a while since Nintendo trotted out a brand eShop game, and this time they’re bringing about Tank Troopers, a third-person shooter where you play as a tank. The primary focus of the game is on local multiplayer, and fortunately Nintendo delivered a fun little experience ready to be enjoyed on 3DS if you can get some friends together. 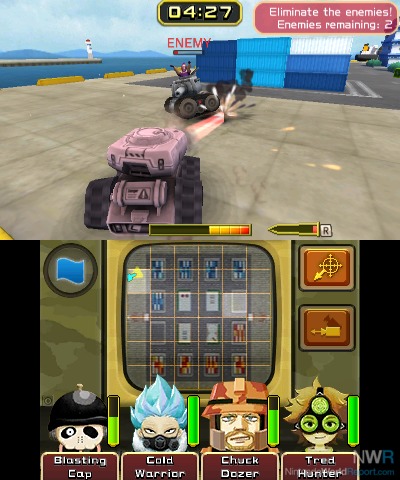 Tank Troopers has three core modes: Multiplayer, Single Player, and Download Play. The multiplayer mode seems to be the main feature in the game, but luckily it also has a fairly robust and fun single-player campaign composed of 30 missions. Each mission can be played in two modes. One is called Custom Tank, where you can use your own custom tank and characters (or ”Troopers”). The other mode is called Take Orders, where you have to use predetermined tanks and troopers. Taking around five hours to complete all the way through, each set of 30 missions include goals like "Kill X Amount of Enemies" or "Race to the End." A few missions are even reminiscent of Metroid Prime: Federation Force’s Blast Ball mode, as you have to shoot different balls down paths and/or into targets. Difficulty spikes pop up during the missions, especially since you have to complete each mission in a linear order. This forces you to get good at the game, which was actually a welcome surprise. Many of the challenges made me frustrated, but after a few plays, I came away victorious, fully mastering the controls and using the game mechanics to my advantage. This is what turned out to be the best feature of the single-player: teaching you to play and learn all of the controls and nuances. The game also has a great stereoscopic 3D feature that helps you judge distance a little better, very similar to other 3DS games (like developer Vitei’s previous work on the Steel Diver series).

Unfortunately, the campaign offers nothing in the way of a story to really develop the crazy and dynamic characters included in Tank Troopers. You just go from mission to mission, getting graded as you move along. You can replay missions for higher grade, helping to add a fair bit of replayability. Going for the S Rank on all 30 would prove you to be a worthy trooper indeed. Conquering each mission also gives you currency to spend in the Garage on buying Troopers, Tanks, and paint jobs for your tanks, for use in multiplayer and Custom Tank.

The controls in Tank Troopers feel like a great combination of controlling a Landmaster from Star Fox 64 and piloting a mech suit from the aforementioned Metroid Prime: Federation Force. Driving around in your tank feels good, even without having a dual analog setup. While using the Circle Pad to steer, you use the A button to push you forward, and the B button to make you reverse. Also, if you hit up or down on the D-Pad, the tank will hold a continuous movement back or forward, and at any time you can press the X button to bring up a scope that allows you to see further and aim easier. The hook is that when you press the L button the tank goes into Artillery Mode. This limits your movement to forward and backward, but let's you move your turret in 360 degrees. Along with the Artillery Mode, the 3DS gyroscope also lets you fine-tune your shots. This allows the player extra precision in aiming to help hit the enemies while they flee away. When you master this mechanic, you get the feeling that you truly are a real tank trooper, roaming the lands and blasting away other tanks like it's no one's business. (You also have the choice to turn motion controls off and/or invert the camera controls.)

Controlling the tank is frustrating at times, but honestly, I think that it can add to the difficulty and challenge in a very good way. Being in a tank obviously doesn't feel as loose and agile as being on foot, so it makes close combat occasionally awkward. Sometimes the tank controls can feel constricting and difficult when getting into tight skirmishes, but this teaches you that maybe sitting away from the targets has its benefits.

During your tank trooping adventures, you can select various Troopers located on the touch screen that can give you a special boost or power. Each character has a different ability that activates when you touch their picture. The abilities vary from offensive boosts like stronger bullets and ramming power to defensive ones such as a speed boost or a shield. Once you've tapped a character, their ability begins and starts to drain their power meter. You can use them until the meter is drained or you can use them for a quick moment and tap them again to save power and start to recharge. You can only use one character at a time, so this becomes a fun and challenging (but simple) balance of using them for your full advantage.

There's nothing too surprising when playing in the multiplayer modes. You can choose your own custom tanks to use from your garage and battle in five aesthetically different maps. The goal is to do the most damage during these matches in the pre-determined amount of time.  There are 3 different sets of rules to play with: Free-for-All, Team Battle and Bomb Battle.  Bomb battle puts a gigantic blue bomb in the middle of the map, and you can use it to deal great damage on the other teams' base.

These modes are tried and true, and work better the more people you have to play with. Luckily there is a Download Play option if only one of you has the game. Although all modes are still playable in this option, the caveat is that everyone has to play with the same tank and Troopers. On top of that, there is only one level to choose from. By now this has become the standard for Download Play features in games, but it still stinks to not have these options, especially when there isn't any online multiplayer.

Yes, Nintendo decided to release a multiplayer focused game in 2017 without online play. Instead they did their thing and made it a "local multiplayer-only experience." This is a darn shame, because this could be the perfect quick eShop game to play with my friends when I have a couple of minutes to spare.

The good news is that even though Tank Troopers doesn't feature online play, it does feature very fun local multiplayer and super fun single-player modes. With all of the missions to master, Tanks and Troopers to collect, and good selection of modes to play with your friends, Tank Troopers is a great little game packed with content that would be a great addition to your 3DS library.

This review was written by Perry Burkum; a review code was provided by Nintendo.

Yeah, the lack of online is indeed baffling, and that's going to undercut a lot of sales here. However, beyond that, I'm also enjoying my time with this game so far. Trying to get S ranks can be quite difficult!

The lack of online means I'll probably be passing on this one.

Is this free or does it cost?

Is this free or does it cost?