A Terrible Fate, An Incredible Experience.

When The Legend of Zelda: Ocarina of Time first launched on the Nintendo 64 back in 1998, it was an instant masterpiece. Critics and fans alike christened it as one of the most important and beloved games of all time (a title it continues to hold). Imagine everybody’s surprise when The Legend of Zelda: Majora’s Mask was revealed in the ensuing year. It looked like Ocarina, played like it, but was wholly different in every conceivable way. By the time the credits rolled fans were left with yet another timeless masterpiece that transcended expectations. Majora’s Mask made known it had something much more intriguing and compelling to convey.

Majora’s Mask tells a much different tale than Ocarina, with a stylishly zany art style and color palette that draws closer comparisons to a Tim Burton film than a Zelda game. By using a melancholic story atmosphere, sad and somber music, and an overall eerie tone, it provided a truly unique experience I feel has still not been matched. The story picks up where Ocarina left off. Link, the hero of Hyrule, has succeeded in his quest to defeat Ganondorf and has been returned to his childhood in hopes that he might live a normal life. Without purpose and missing friend and companion Navi, Link sets out to find his missing fairy and meaning in the world. From there, Majora’s Mask is an evocative and emotional journey. 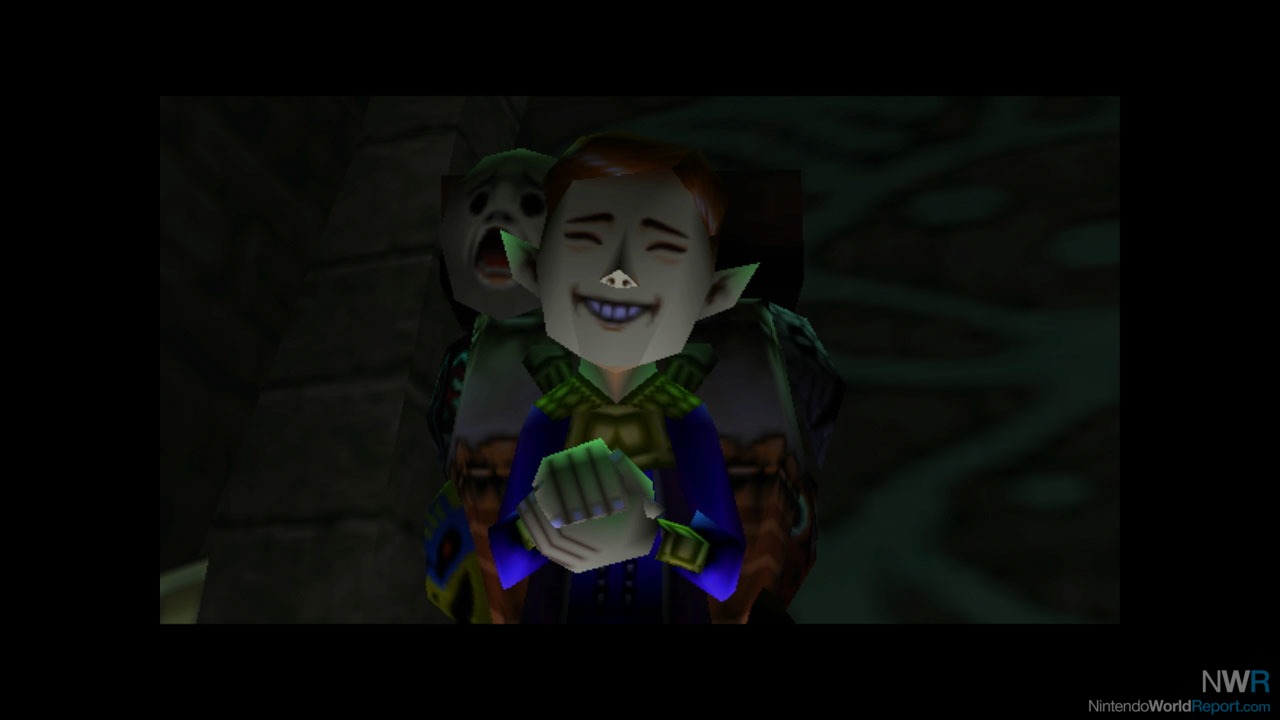 Although the aesthetic and presentation are some of the most intriguing elements, Majora’s Mask shines brightest in world and character building. The world of Termina is about to end thanks to the terrifying moon descending from the sky to obliterate the hub city of Clock Town. The player has three in-game days to stop the moon from falling and killing everyone in its wake. This creates a scenario where the player must travel back in time and repeat the same three-day cycle over and over until you have saved the town from its imminent destruction. It is a smart and well-implemented mechanic that feels more thought out and novel than the standard Zelda premise.

Majora’s Mask trumps its predecessor with its numerous side quests as well. In many games, side quests feel tacked on to pad the length, but here they connect you directly with the residents of Termina. These quests vary from saving a farm from aliens to bringing together two star-crossed lovers. These types of characterizations are often attempted in video games but not often successful, and Majora’s Mask succeeds here in providing a real human touch to the adventure. This makes the weight of saving everyone in Clock Town feel more pressing and personal, while providing the player with a sense of duty and responsibility.

Viewing Majora’s Mask through the lens of humanity, friendship, and responsibility allows it to stand out more so than almost any other video game, Zelda or otherwise. Of course, Majora’s Mask still has staples of the franchise like dungeons, fun puzzles, and engaging combat. While these aspects remain similar in concept, they are implemented in different ways that show off some rather impressive use of time manipulation and smart creative design. The game is a fun, charming, intelligent, and impressive feat. What used to be considered a cult classic has found its way into the hearts of many as an outstanding experience.

Although Majora shows its age in menu design, placement of items, and processes of completing tasks, it remains consistent and never feels dull. Some of the tasks and waiting for events to occur could feel a bit arduous by today’s standards (a problem the recent Grezzo remaster (LINK) addressed), but it never feels so frustrating as to make the experience feel bogged down. By the adventure’s end, Termina feels like a place I want to revisit for years to come. The musical score is also phenomenal with recurring composer Koji Kondo leading the helm. It strikes the perfect mix between lighthearted and sorrowful, creating the perfect mood given the melancholic tone.

Everything about Majora’s Mask culminates in a timeless masterpiece that is buoyed by an emotional, heartwarming, and evocative tale of a boy seeking purpose. To think that it came out in 2000 and it still holds up as much as it did back then is nothing short of amazing. The Legend of Zelda: Majora’s Mask is still to this day one of the greatest games of all time.

I'm bothered by the fact the save system in this game isn't listed as a con.

I played Majora's Mask in 2001.  My family had only just got an N64 in 2000 and my brother got Ocarina of Time that Christmas so MM waited until the next year.  2001 was also the year I started my current job so I had suddenly had money for the first time in my life and went a little nuts on the videogames.  I remember picking arbitrary dates to get Game X to space things out and I made some decision like that with MM, though I don't remember what time of year I did this.  I remember how excited I was going to the store to buy it though.

I tend to regard MM as one of my favourite games but I have never gone back and played it since the first playthrough all those years ago.  The thing is that when I was 19 I had a lot more free time and a lot more patience for game design that required an open mind.  I thought the three day system was brilliant despite the restrictions with saving and the time limits in dungeons and the general amount of repetition required.  I'm almost afraid to go back to it now because I fear as a 35 year old I'll find those things more annoying.

Hell, I ran into a complication with this back when I first was playing it.  I still lived with my parents at the time and my parents are not familiar with concepts like save points in videogames.  One Saturday while I was playing one of the dungeons my Mom ordered me (remember I was still a teen) to go with my Dad to the building center to get some lumber.  Trying to explain to her that in THIS game I couldn't save at any time did not go over well.  Due to the convoluted nature of it she probably thought I was lying.  I eventually convinced them to let me leave the system on with the game paused during the errand and the whole time I was afraid one of my brothers would turn it off or the system would conk out (an odd thing to be concerned about since if I didn't have to leave I certainly would have had the system on for the same amount of time while playing it).  It does suggest a slight problem with the save system when a 19 year old with virtually no responsibilities runs into issues of real life butting in the way so I imagine a parent with kids would be screwed.

What I really liked though was how much non-dungeon content MM has.  I think some people don't like that but I'm of the mind that if all you want out of Zelda is dungeons then it might as well be a linear game of levels.  The world of Zelda is what hooks me so I tend to prefer the games with lots of sidequests and MM is one of the best for that.  And to say it only has four dungeons is really semantics.  There are lots of sidequests with dungeon-like areas that just are not classified formally as such.  Having content with the same appeal as dungeons while not rigorously sticking to a dungeons format is a good way to keep the games from being formulaic.  I hope Breath of the Wild delivers for me in a similar way.