Not all mobile ports are made the same. 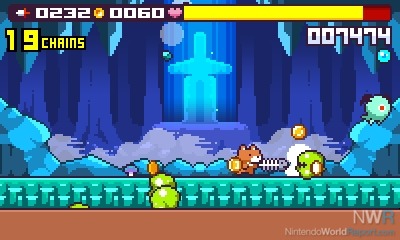 Developer Urara Works is no stranger when it comes to bite sized gaming. The company has been making all sorts of mobile games on the iOS and Android platforms for the past seven years. Drancia Saga for the Nintendo 3DS is a port of of the iOS version of Drancia which was originally released on iPhone and iPad back in late 2014. Even before it was released on mobile, the game had its humble beginnings as a web-based game (then known as Drancia Survival) via the original developer Skipmore. Now, years after the original release, it is still totally worth checking this game out on a dedicated gaming platform.

For those that don’t know, Drancia Saga is an action RPG with an 8-bit style taking place on a fixed screen. Your character (of which there are many) is constantly moving to the left or right and has the ability to jump and attack oncoming enemies. Controls are simple. Pressing left or right on the D-pad or Circle Pad changes the direction of the character while A performs a jump. Attacks are even easier as you just simply run into enemies to defeat them and pressing the B button releases a magic attack that can take out multiple enemies at a time. It’s super easy to get used to and the controls are pretty tight. Initially, I found myself wanting to have direct control over the movement of the character, however, the game is definitely more challenging and fun with the constant movement. 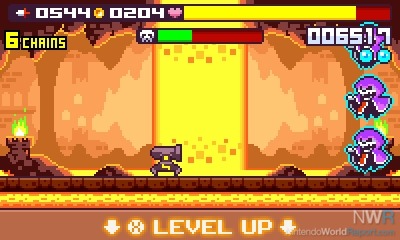 Despite everything taking place on a fixed in-game screen (on the 3DS top screen), enemies are constantly pouring into the stages. While enemies vary in looks depending on the theme of the level, there are still around half a dozen types - slow moving ground based types, slow moving flying types, projectile shooting types, faster ground based and faster flying types. Occasionally the stages themselves have hazards that also come into the field of play. For example, on a stage themed around lava, there are volcanoes that shoot molten rocks into the filed of play. This creates impassable spots in the level where heat rises from the affected area that players can’t jump over and deal significant damage if carelessly ran into. After each of the eight stages, players have to defeat bosses which vary in difficulty but are all about pattern recognition. The constant influx of enemies and stage hazards requires players to manage how and when they defeat enemies.

Every time you defeat an enemy, they litter the surrounding area with coins. A chain meter keeps track of all this and gives you more gold with every defeated enemy. The treasure gives health bonuses, while the coins also give you points which are converted into diamonds that can be used to level up your characters during your play-through. Each character can reach a maximum level of 17 with the ability to upgrade things like health, attack power, speed, magic and even ability to regain health. All of the upgrades are handled on the touch screen while pausing the action on the top screen. The whole system isn’t super complex, but chaining through 50 monsters without getting hit and seeing gold and treasure littered all over the stage is rewarding!

In terms of visuals and audio, Drancia Saga is clearly a love letter to 8-bit gaming. The characters and enemies used throughout the game are all in a simple, NES/Famicom 2D sprite style and the music harkens back to the kinds of tunes you would find from the era. The sharp colorful visuals look great but unfortunately, stereoscopic 3D is not supported here. 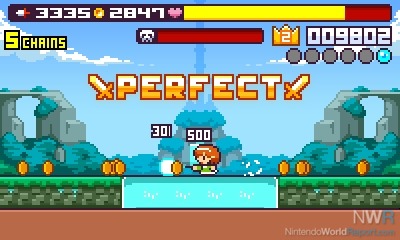 Most of Drancia Saga is completely charming and fun, however, the biggest pitfall is that the game is just over way too soon. As mentioned above, there are eight stages to go through as well as a final boss fight and a few cut scenes, but you can get through everything in an hour or less. The game does encourage players to try to get through the initial eight stages without dying (which can be pretty tricky depending on which character you use), however, without giving any spoilers, the payoff is a bit underwhelming. The thing to keep players coming back is the ability to play through the game with additional unlockable characters. The unlockables are mostly enemy characters that are found in the main game, and like the playable characters from the outset, each have different statistics as well as pros and cons to using them. There’s a lot of potential to sink a lot of time into this game, but it all depends on how many times players will want to see more of the same over and over again.

Drancia Saga on 3DS is a competent port of a mobile game that is both charming and challenging. The visuals and sound are fantastic, the controls are great and it is extremely easy to pick up and play in short bursts. Despite all of this, mileage will vary depending on what you’re looking for in an action RPG as things are over a bit faster than they should be.