The transition of the Paper Mario series from a light, JRPG affair into more of a series of action-platformers hasn’t exactly been smooth. The original game and its sequel, Thousand Year Door, are well-loved by the crowd of Nintendo faithful, but more recent experimentation with the series in Wii’s Super Paper Mario and, especially, 3DS’ Sticker Star have not been met with high praise. With the 3DS entry in particular leaving a bad taste in fans’ mouths, many wondered where exactly Nintendo would take the series from there. So it’s understandable that the reaction to the initial footage of Paper Mario’s newest outing, Color Splash, garnered a little bit of negativity when it seemed too similar to Sticker Star. After all, in this reviewer’s opinion, Sticker Star was a mess of a game, filled with confusing, unfriendly puzzles and mindless meandering to accompany unintuitive level design and a joyless, unrewarding battle system. There really wasn’t much to like in the 3DS game for a series fans had once held so dear. It was hard not to compare Color Splash’s reveal to that game, then. I want to set those thoughts and fears aside, however, because I’m very happy to tell you that Color Splash is, in many regards, everything that Sticker Star SHOULD have been, and in other ways, so much more. 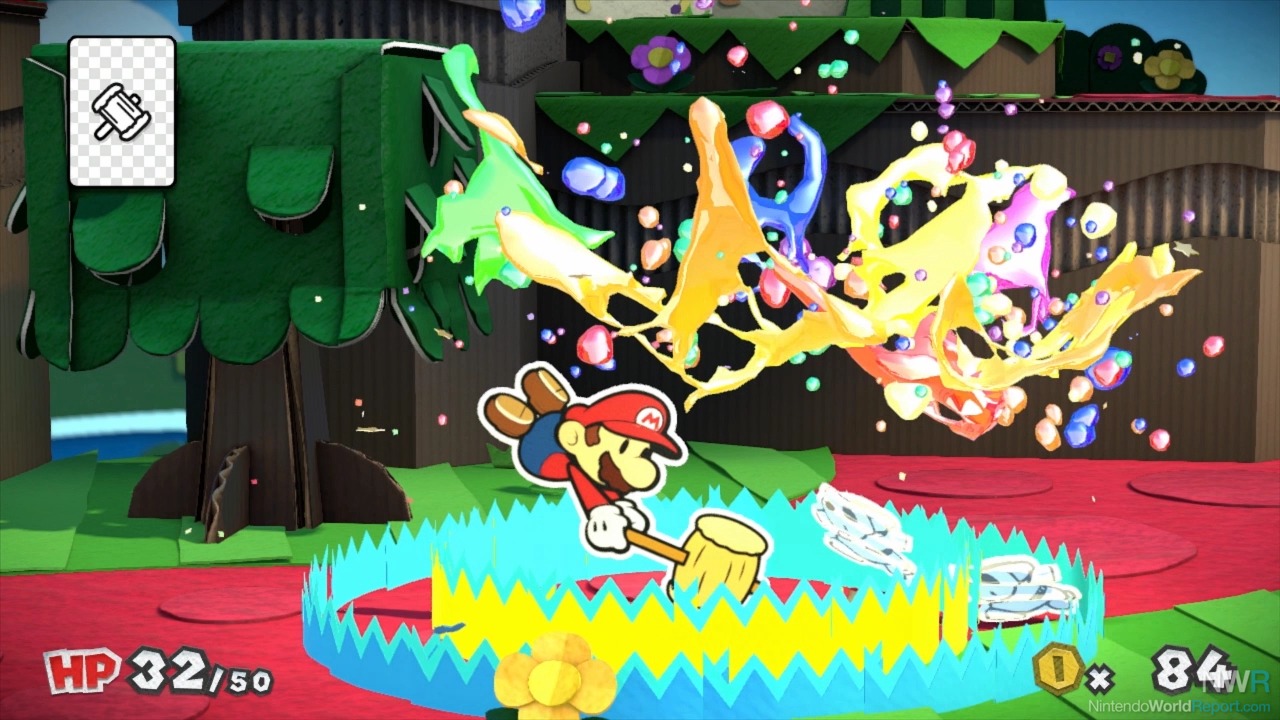 As the game’s subtitle hints, Color Splash is full of bright, vibrant hues that make the visuals pop. This is one of the best-looking games the Wii U has to offer, and the development team has taken both the paint and paper themes to heart. Everything from the environments, character models, and puzzles to the combat and title screen are designed with these aesthetics in mind, and it’s absolutely gorgeous at times. And that’s to say nothing of the soundtrack, which wonderfully compliments the visuals to create an atmosphere that’s filled with emotion and whimsy.

That whimsical aura isn’t just contained in the presentation, however. Paper Mario: Color Splash is the funniest game I’ve played in a very long time. The localization team for this game deserves a gold medal, as there were multiple occasions in which this game had me laughing out loud; a rare feat that few games have ever accomplished even once in an entire play through. The humor on display, be it in the form of dry wit, slapstick, breaking the fourth wall, or playful references to Nintendo and Mario history, almost always lands in all the right ways. I haven’t smiled and laughed this much because of a game’s script since the first time I played EarthBound. The humor is accentuated by a lighthearted, traditional Mario plotline. I won’t go into spoiler territory here, but I doubt many will be surprised to find that a certain villain is causing trouble on Prisma Island, and it’s up to Mario and his new paint bucket partner, Huey, to put a stop to it. As in most other Paper Mario games, you’ll be traversing the island in search of legendary Stars that will restore paint and life to the world, and give you the power you need to take down your foe and rescue the princess. It’s all stuff we’ve seen before, but presented in a way that is fresh and hilarious, with one Toad even sarcastically commenting “No one could have seen this coming!” after Peach is taken away. 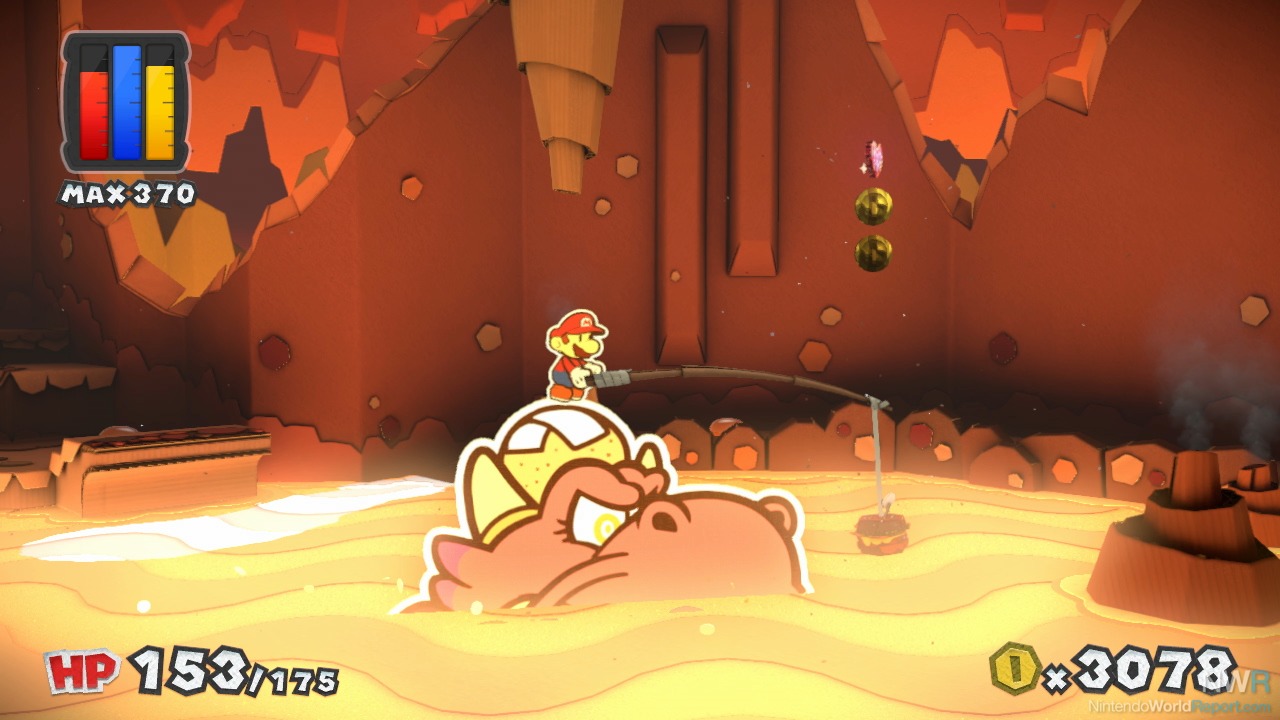 Prisma Island is home to all kinds of environments, enemies, and puzzles that Mario and Huey will have to get through in order to save the day. Where Sticker Star was often obtuse and confusing in how it handled its level design and puzzle solving, Color Splash often goes out of its way to ensure that players never feel too lost. The developers clearly took the criticisms of Sticker Star to heart, and have crafted a more streamlined experience. If there is ever an item, or “Thing” card in the game’s universe, that Mario needs in order to progress, it is made obvious to the player that they’ll need to go back and find it. Gone too, are the battles and combat that often felt meaningless in the previous game. Where Sticker Star offered the player almost no reason to grind in enemy encounters, Color Splash provides incentives that made me want to fight everything in my path. Mario can only carry a certain amount of paint in his hammer, which is used to solve puzzles and power up your attack cards in battle. The only way to increase this limited amount of paint is to battle and collect the hammer tokens that fallen enemies leave behind, as well as new cards to use in future encounters.

The combat itself is also a little more hands-on than prior Paper Mario games. Enemy encounters are initiated by either touching an enemy, or by attacking them to deal damage in a first strike. Players must then select battle cards from their decks, a group of cards they’ve collected or bought with commands like “Jump,” “Hammer,” and “Mushroom.” There are dozens of cards with varying effects to collect and use, each one contributing its own nuance to the battle system. After selecting the cards they wish to use for that turn, players are given the opportunity to paint their cards as well. The more paint added to a card, the more effective it will be, so players must manage their paint stock wisely in order to deal as much damage as possible. It all makes for a more strategic and engaging combat system than the series has ever had before, even if it does feel a bit slow at times. 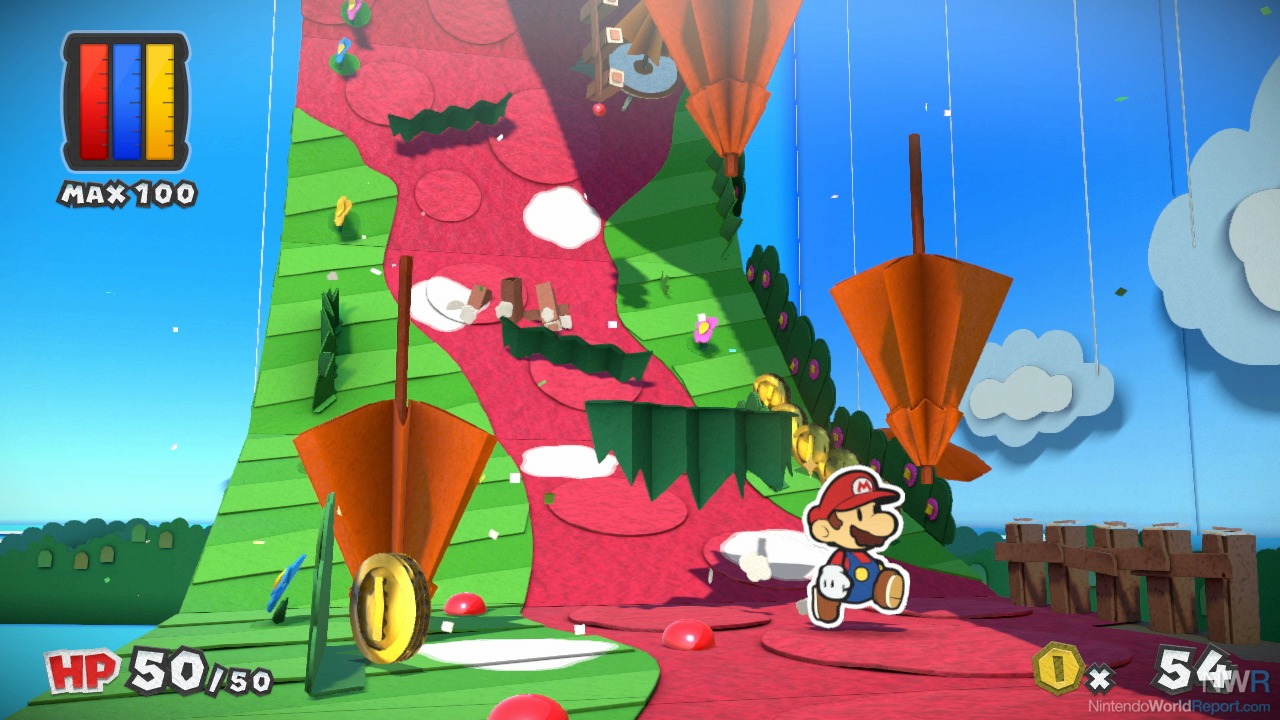 If there’s one complaint that I have about Color Splash, it’s in its cast of characters. Earlier Paper Mario games provided Mario with a handful of memorable partners and unique side characters that were inspired by creatures from other Mario games, or in some cases original creations entirely. Outside of Huey, Mario’s paint bucket sidekick (who is actually kind of endearing), most of the characters you’ll meet are Toads. This contributes to a kind of same-y feeling no matter which town you visit, as Mario and Huey and some of the bosses you’ll encounter feel like the only standout characters in the game. Even Toads who are supposed to be more important, or have specific jobs, share the same character models as their counterparts. In one section of the game, there’s a professor you have to meet with, but there are no distinguishing marks to separate him from the other Toads. How hard would it have been to give him a pair of glasses and a cardigan?

But these are minor complaints in an otherwise excellent package. I wasn’t expecting to be so surprised by Color Splash, and it’s turned out to be one of my favorite games this year. Color Splash is a gorgeous, funny, and entertaining adventure that functions as a wonderful swan song for the Wii U. There’s a lot of content and fun to experience here, and Wii U owners owe it to themselves to give this game a chance. It’s not a direct sequel to Thousand Year Door, but it doesn’t need to be. Color Splash is a fantastic game in its own right, and deserves to be played by everyone.

One thing I can't figure out from what I've read is if the cards are disposable items. One of the main reasons I didn't touch Sticker Star is that the titular sticker system, where even basic attacks are one-time-use items, sounded absolutely maddening to me.

One thing I can't figure out from what I've read is if the cards are disposable items. One of the main reasons I didn't touch Sticker Star is that the titular sticker system, where even basic attacks are one-time-use items, sounded absolutely maddening to me.

Yes, the cards are one-time use, disposable items. But they're common and cheap enough to where you're unlikely to ever run out of them, and enemies tend to drop them when defeated. Some of the more rare cards require more thought and management as to how/when they are used, but don't worry that you'll run out of attack cards. The game provides you with enough cards and coins to ensure you're well-stocked! The system is much better than it was in Sticker Star!

It sounds to me that this is for someone that found Sticker Star flawed but feels a more refined take on it would be a worthwhile game.  But if you do not like the direction Nintendo has taken Paper Mario then this isn't going to win you over.  There is a difference between not liking the specific execution of Sticker Star and thinking that the whole concept was a mistake.  This is only for the former.

The insistence on keeping all the Toads the same though is a real turnoff because it is SO stupid and there is probably less than 10 people on the entire planet that like it that way and they all work for Nintendo.  Nintendo is often stubborn and when they stick to their guns on stuff like that I feel insulted, like they're telling us that we're wrong and they know better.  The idea wasn't well received and I dare someone to try to argue that having what was once several unique looking characters all look exactly the same is better.  So why would you keep it other than a stubborn refusal to accept criticism?

While I won't deny sticker star had its issues, it definitely did one thing very well: it was a GREAT RPG for people who, like myself, don't really like deep RPGs. The only RPGs I've ever enjoyed were the Mario/Paper Mario games, and I LOVED thousand year door, but man, it could be REALLY challenging at times. And yes,Sticker Star stayed pretty simple, but I see that as a good thing. Nothing was ever TOO difficult; even the bosses hit that right kind of challenging, yet really simple if you knew the right secret. And my favorite part: NO GRINDING! So, yeah, while Sticker Star wasn't exactly Thousand Year Door's level of grand adventure, it was a great casual RPG and one I still like to visit from time to time.

I have only played TTYD, but I will buy this one. It sounds pretty good.

I'm pleasantly surprised to read that the game turned out to be this good. I was willing to give it a chance and from reading the impressions it became obvious early on that this game wasn't going to be bad, but I still wouldn't have bet on it being as good as this review makes it sound.