It's not going to win any Grand Slam tournaments, but it might win a round or two.

It was inspired timing for Chequered Cow Games to bring out Power Disc Slam when they did. The 3DS doesn’t have a lot of sports games on it, and releasing around the time of the Olympics would normally be a smart bet. Trying to pair the game with cult classic 1994 title Windjammers should have been a draw as well. Unfortunately, it’s hard to convince people to play a game when it hard-locks the system multiple times and has some control issues.

The sport of Power Disc Slam has very simple rules: two players are placed on an enclosed court with a net in the middle and yellow or red scoring areas on the walls behind them. It kind of resembles a combined tennis and racquetball court. The players throw a flying disc back and forth across the net, aiming to have the disc hit the ground on the opponent’s side for two points or hit a scoring area (3 points for yellow, 5 for red). First to a prescribed score (usually 10 or 15) or the player with the most points in a time limit wins the set, and two sets usually wins the match. Each of the eight playable characters has different stats, and the stadiums mix in different surfaces and obstacles on the court to shake things up and give a little graphical variety. 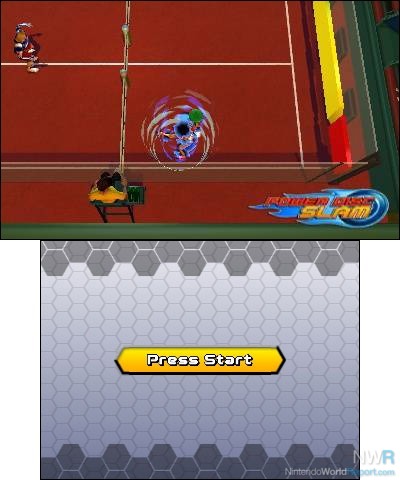 There’s a good mix of single player modes, with tournaments, quick matches and a neat survival mode that runs until the opponent gets their 15th point in a set. There is the base of a good multiplayer mode, but in multiple testing sessions I was never able to get an online match going to see how the netcode holds up, nor find a local partner for multiplayer or even test the StreetPass function. There are leaderboards and local high scores to chase, but a lot of the appeal for this game is in multiplayer and the base simply isn’t there for it.

Although the controls work fine for the most part, trick shots – such as giant curving shots or ones that move in a curly brace pattern (a sideways { ) require complex circle pad movements that I couldn’t manage to execute properly very often. And especially at higher difficulties, the AI will launch these shots with abandon. The game also locked my 3DS to the point of a full system shutdown twice, and another problem of the game’s limited base is that it may preclude the developers from patching the game.

Power Disc Slam is a fine game in theory, but there’s something missing that will prevent it from breaking out on the 3DS. This is the kind of game that would benefit from a larger view – maybe a console port? - and making it easier to show others that it exists even through Download Play. But as it stands, it’s probably better to hope the Japanese mob lets Windjammers come out again.

A copy was purchased by the reviewer.

Interesting. And good review, thanks.