This is a polliwog with a purpose. 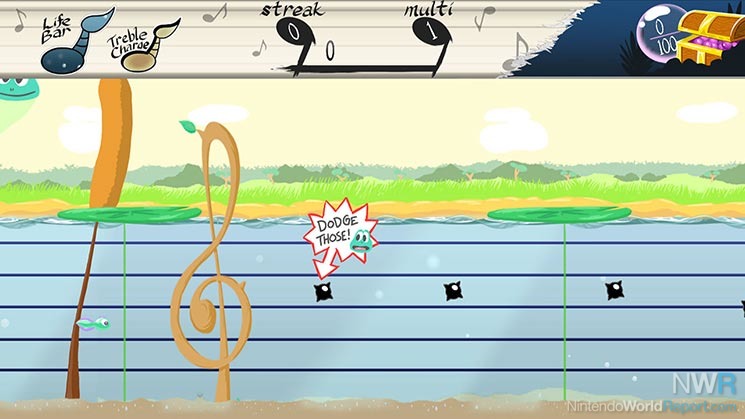 When Tadpole Treble hit Kickstarter a few years ago, it didn’t blow up as much as I thought it would. Given the game was designed by Matthew Taranto of Brawl in the Family fame, I figured it would double what it ended up at. It missed the Wii U stretch goal, but it appears slacker backers pushed it over the top and we’re lucky they did. Despite a short main game, Tadpole Treble is one of the most replayable eShop titles we’ve had in a long time.

The core of the game is the story mode, in which a tadpole is separated from its family and has to navigate multiple streams to get home. What’s odd about these streams is that they’re actually musical staffs, so the tadpole swims through sheet music that resembles a high-definition version of Mario Paint’s music creation mode. There are obstacles in the way that make music as our amphibious protagonist passes by, but hit too many of them and the level restarts. Along the way, there are bubbles and charges for a super attack to pick up, as well as the occasional health-restoring item. Although the levels aren’t too long – about three or four minutes on average, with roughly twelve levels in total – there are unlockable bonuses for collecting the bubbles as well as completing certain objectives in each level. Completing the challenges and unlocking the final mission will keep the game going long after the tadpole swims through the end credits.

Although it’s easy to skimp on the graphics in a rhythm game, the creator’s background as a comic artist means it’s easy to laugh at a funny event in the background. The main obstacles on the staff stand out well though, which helps make things easier. Musically there’s a good variety of genres represented, with the sound of Thunder Creek being a personal highlight. The controls are simple and effective, with the d-pad for movement and every other button to swing the tail or charge a swing.

The other major feature is the Composition Mode, which functions similarly to the Mario Paint composer it takes cues from. Take a group of notes and apply them into up to 3-note chords to try and make something that sounds good and plays well. The odd part is the sharing of levels, as the primary method is using QR codes uploaded to Miiverse to play other compositions (using the GamePad’s built in camera to capture them). Without knowing the format of the music to determine if a code (like Super Mario Maker) would be an option, this method did turn me off playing the fan creations. Though there should be some higher quality songs as the game gets farther out from release and the player base has had a chance to learn all of the ins and outs of the system.

My own lack of creative ability is keeping me from getting in and writing a great song in Composition, but even going back and getting the bubbles I’ve missed during the first playthrough will keep me hopping to Tadpole Treble. Definitely look into it if you have a creative spark or just love rhythm games.

A review code was provided by BitFinity.