Want a decent time with your friends this Summer? This is likely your best bet.

With the release of Mario & Sonic at the Rio 2016 Olympic Games on Wii U, we are starting to wave the system goodbye. It is likely one of the last first party sports games on the system, and that is saying a lot. With games like Wii Sports Club or Mario & Sonic Sochi 2014, Nintendo tried to bring the Wii flavor back, and they did it with disappointing results. How does this effort stack up? Well, it is good. Quite enjoyable even, but there are some things certainly that left me disappointed.

The big takeaway is that the actual sports are worth playing through, be it alone or with friends. With fourteen Olympic sports on offer, I would say that the selection is decent enough. There are simple events like the Triple Jump, while bigger events like Equestrian and BMX brighten up the roster. There wasn't a bad game or dull moment in the line-up, which can be considered a rarity for these games. The major problem is that we wanted more of them to bring what could have been the biggest selection to a Mario & Sonic game ever.

Why is that you might ask? You see, the previous games had special Dream Events. These special experiences brought worlds, music and characters from the Mario & Sonic universes together. Battling enemies on a horse while traveling across Moo Moo Farm? HA, why would you want that? Seriously though, these are things that made the games special, and all of a sudden they don't matter anymore. What kind of sense does that make, SEGA and Nintendo?

Instead of these Dream Events, there are now seperate Dual Events for the three biggest sports in the package. For the Wii U version, those are Football/Soccer, Rugby Sevens and Beach Volleyball. In Duel Events, you will attack your opponents with items or energy blasts and build up a point combo. By scoring successfully, you get all the points in one fell swoop. The opponent will get their combo cut in half when this occurs, but they will have a lead for when the next chance arises. All of this creates more fun moments during gameplay, and I certainly liked what they were going for.

Another nice touch is the controls in the game. Gone is the notion that motion controls are the only thing that truly matters, because you will solely play with buttons. Regardless if you play with the Wii U GamePad or the Wii Remote, you will battle more at your own leisure. London 2012, my favorite entry in the franchise, had the same chill additude to the experience, and that makes it instantly replayable with my friends. We had fun betting on our scores in the Archery game, or charging our attacks for explosive moves in Table Tennis.

Outside of the basic local multiplayer functions (no online), there is a fun mode called Heroes Showdown. This is hands down the best way to experience the game, as players join the Mario and Sonic teams and battle to reign victorious. Each side will have ten characters to choose from and you will have to constantly select the one you think is right for the job. If you win, that character stays in the game and you take a step closer to victory. Players will also have to strategically pick the row in which the characters are placed. Each row gives you access to a special card upon winning, which can destroy some opponents faster. Heroes Showdown ends if the captain (Mario or Sonic) has been defeated, so it stays exciting until the very end!

If you are playing solo or with one additional friend, you can tackle the Olympics. You will be playing as your Mii, who will fight against other Miis in qualification rounds and finals. This starts out easy enough as you have to take on all Level 1 CPUs in every event, before moving to the second and third levels of competition. You may call it dumb, but I found myself enjoying battling Mii characters from around the globe. It seems as if there is more of an urge to overcome your rivals and they try to make this fun through and through. They even throw in additional goals to tackle, which gives you access to all sorts of Mii gear.

After the Miis are defeated, you will learn where they come from or get useful tips for the sport you just tackled. You can walk up to them for a chat, cruise around for some shopping or interact with the various options in the game. It is here that you will meet new characters to challenge, which each can be used on specific events. This hub world, known as the Copacabana Beach, expands as you keep playing and more will open up as you continue your quest to become the very best. Who knows? There might be even a carnival with some challenges waiting for you.

These objectives will give you additional gear and will challenge your skills to the extreme. They do this better than the competitive Ghost Match option, which is seriously underwhelming. You can fight here against top ranked or same ranked ghosts in three different sports. The sports chosen are disappointing (100 meters. 4x100 meters and Swimming) and you won't return to it after a little bit.

Regardless of what you play though, Mario & Sonic Rio 2016 is a beautiful looking game. You do get the feeling that you are truly present at the big attractions in Brazil, which is fantastic to see. It is colorful, bright, and above all incredibly sharp. The music is good enough as well, but the amount of new Mario & Sonic remixes is disappointing. Outside of new versions for Reach for the Stars and Super Bell Hill, you will mostly find songs from the previous entries. The original songs that are specific to Rio 2016 are the highlight music wise and they honestly stand out well.

At the end of the day, I enjoyed what Mario & Sonic at the Rio 2016 Olympic Games on Wii U tried to deliver. While the limited amount of events are the major downer here, I had fun playing them alone or with my friends. They found unique ways to represent the events, which is what matters at the end of the day. I do expect that the majority will be disappointed with the lack of specific Mario and Sonic touches, which is totally justified. From all the games in the series, this one shows the roots of the characters the least. Depending on how far your love for these franchises go, it will impact your purchasing decision more than likely.

It does look find of fun, I have never played one of these games before. Is the game ok in single player? It seems like it might get boring without extra players, but I have no one else to play games with.

Yeah, no online for this series is still criminal.

Looking forward to picking this up on Friday! 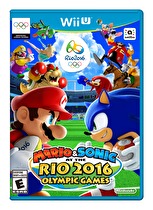