Scroll down for video review

Since the release of Star Fox Adventures on the GameCube, Nintendo has been hard at work coming up with an even stranger addition to the series. It took 14 years but it’s finally here. Star Fox Guard is certainly the Star Fox game we never knew we wanted. Originally presented as Project Guard at E3 2014, Guard was one of Miyamoto’s special projects, along with Project Giant Robot, attempting to find new and unique uses for the Wii U GamePad. As such, Star Fox Guard fits in quite nicely packaged alongside Star Fox Zero. Right from the start, Star Fox Guard feels like the kind of concept the Wii U was designed for. It makes use of the system’s unique attributes in a manner that we’ve rarely seen since Nintendo Land. In fact, Star Fox Guard feels like a game that could have been in Nintendo Land. The concept is simple, easy to understand, but with plenty of room for you to hone your skills. 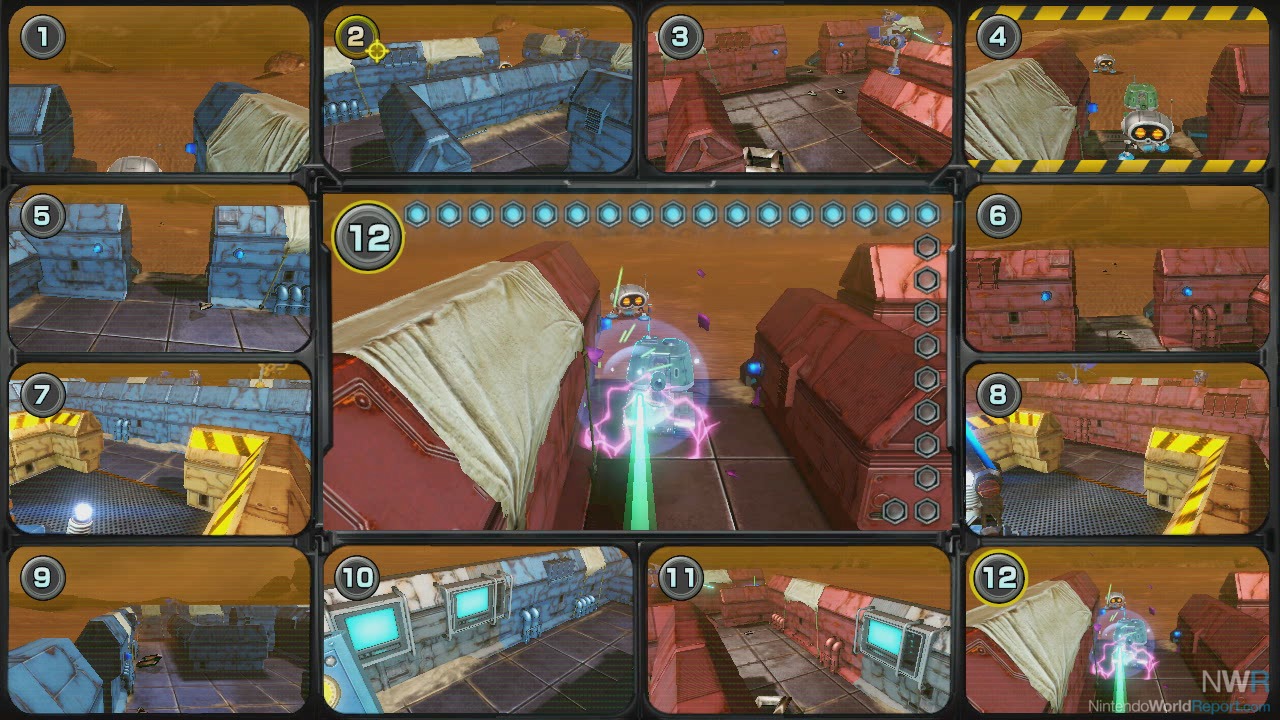 You’ve recently been hired by Grippy Toad, the uncle of everyone’s favorite Star Fox team member, Slippy. Grippy runs a mining company, responsible for harvesting precious metals. He then sells them to the Cornerian military to support their war effort against the armies of Andross. Finally, Nintendo has taken the time to flesh out the complex socioeconomic situation in the Lylat System. Grippy’s mining facilities have recently come under siege from a bevy of belligerent bots who are for some reason dead set on shutting down Grippy’s operation. Your job is to stop them. The GamePad screen displays an overhead map of your base. From here you can see the position and direction of each of your cameras, along with any mischievous robots who have penetrated your base. You can re-arrange your cameras by dragging them across the touch screen. The TV shows the feeds from all your cameras. A particularly large screen in the middle of the TV shows the camera you currently have selected. The selected camera can be moved with the sticks on the Gamepad. You can also fire the selected camera’s weapon by pushing any of the trigger or face buttons. Finally the selected camera’s view is rendered at a higher frame rate than the others, making it easier to detect enemies. This becomes particularly relevant in later levels as cloaked enemies become prevalent. 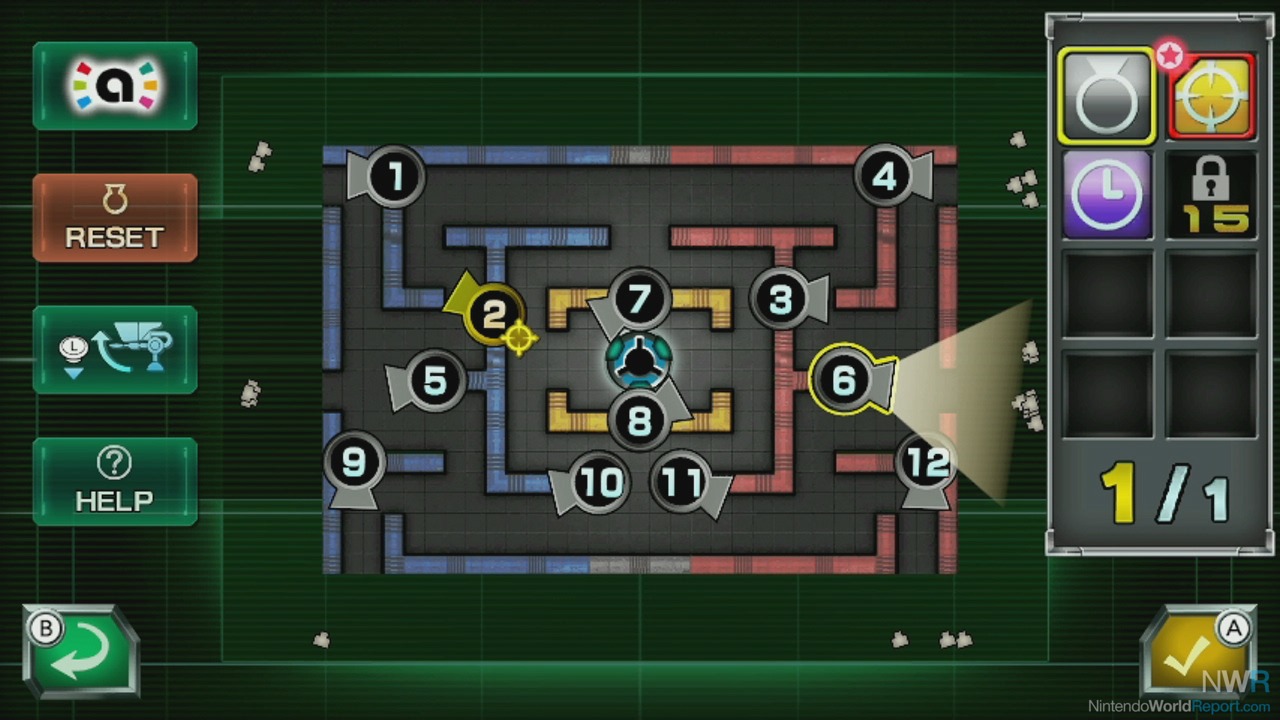 Enemies are split into two categories, attack and chaos. Attack class robots have one goal, get to your excavator and destroy it (thus causing you to lose the level). Because they are the true threat, defeating all of the attack bots will result in a win even if chaos bots remain on the map. Attack class robots are generally tough to kill for one reason or another. Some are simply bullet sponges, while others are extremely quick or invisible to either your cameras or your map. Chaos class robots on the other hand are there to cause distractions and, well, chaos. Their goal is to take out your cameras in order to impede your ability to fight off the attack robots. At first they simply destroy your cameras, but as the game goes on they’ll become much more devious. One type in particular will actually latch on to the front of a camera and feed it a false image. Once you realize this has happened you’ll have to switch to another camera from which you can see the one affected, and destroy the robot attached to it. As levels go on, more and more annoying chaos class robots help to amp up the difficulty.

Speaking of later levels, this game has a lot of them. While it’s easy to see Star Fox Guard as little more than an add on for Star Fox Zero, it does feel very fully featured. The main story missions alone will take you upwards of five hours to complete, assuming of course you don’t have to retry too many times. Add to that the plethora of extra missions, unlocked as you level up in the game, and you can easily double your play time. The question is, do you want to? Despite regularly changing base layouts (There are three on every planet), regularly added new robots, and the occasional boss battle (one per planet) Star Fox Guard’s gameplay can quickly start to feel repetitive. Which is a shame, as the payoff at the end of the game is quite good. The boss fights are one of the brighter spots in the game as you’ll have to employ different strategies than you do in the standard missions. Often times you’ll be fighting against a truly gigantic enemy that can be seen from any camera at your base. However there may still be a few chaos bots wandering around messing with your cameras while you’re distracted by the boss. Finding a good balance between defending your cameras and defeating the boss results in some of the best content in the game. 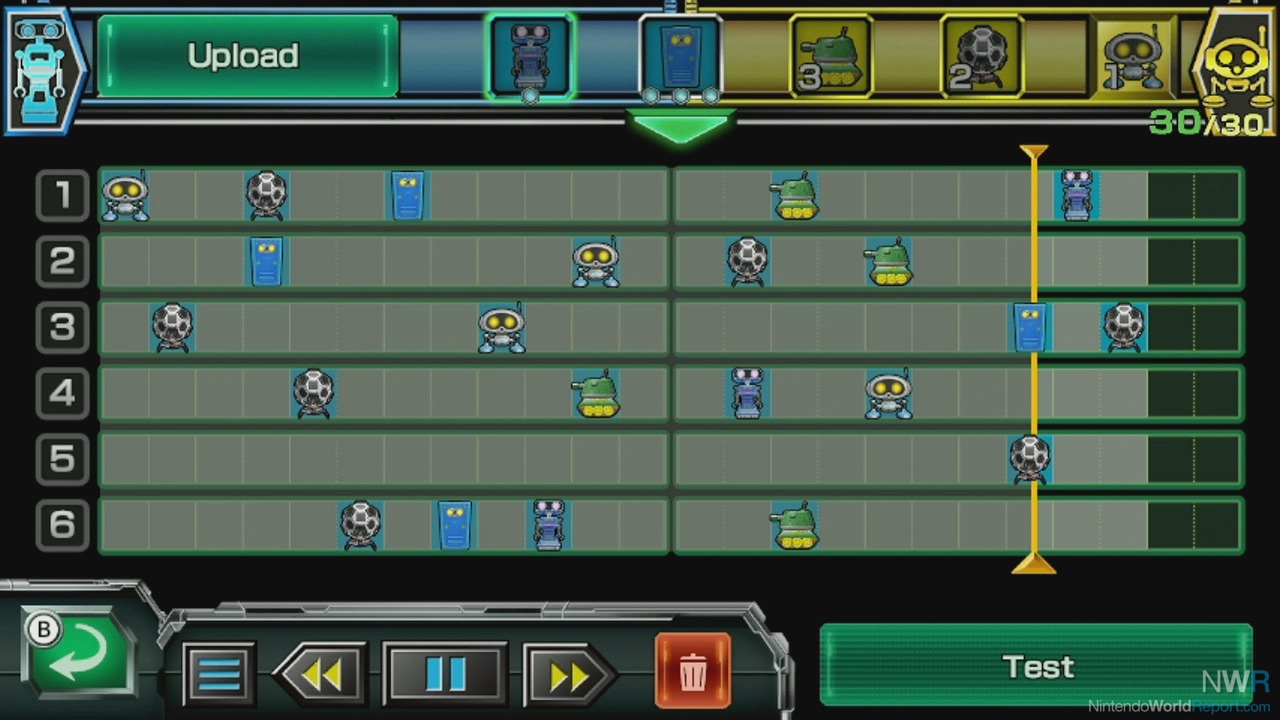 Alleviating this monotony somewhat is the unexpected online functionality. No doubt taking some inspiration from Super Mario Maker, Star Fox Guard features a level editor. As you play through the main campaign you’ll unlock robots to use in your custom levels. The robots can then be placed, via a timeline structure, into your level. You can even go so far as to adjust the paths these robots will take as they make their way through the base. As other players take on your levels you’ll be awarded points for each player who loses to your robotic horde.

Throughout the game, whether playing single player or the online levels, you’ll be leveling up your profile. As you do so you’ll unlock additional stages for each base on every planet. These stages are often times more interesting than the main levels as they employ a lot of new mechanics not seen in the standard missions. Had these mechanics been sprinkled in more regularly to the mainline missions it would have made the levels feel less repetitive. At the same time at least they are indeed available for play. Essentially, the game leaves it up to you just how fresh and varied you want the experience to be.

I personally consider Star Fox Zero to be well worth the sixty dollar price tag. Therefore as a free bonus title Star Fox Guard is a fantastic bargain. It’s fully featured and has a nice long single player campaign. So what if it’s a little repetitive, you didn’t pay anything for it so what does it matter if you never finish it. However Star Fox Guard is also being sold as a separate game digitally via the eShop. Here is where it’s a little harder to justify. As a party game it’s a great experience to have with your friends, and one that can only be accomplished on Wii U. As a single player offering it may not keep you entertained.

This is definitely something that would've been on the disc 10 years ago.  That said, it's a fun bonus, and anyone getting the game right now should consider getting it (for physical it's guaranteed, of course).  I'll look forward to unlocking the hover camera and other such things.

So FNAF with Starfox?