I whip my hair back and forth

Shantae: Risky’s Revenge – Director’s Cut is one of the Wii U eShop’s gems. A well-made Metroidvania game by WayForward, Risky’s Revenge combines expert 2D platforming segments with exploration in fun and inventive ways. And while the game could stand to include more of what it does best, it’s a charming adventure from start to finish.

Without spoiling much of the plot, titular heroine Shantae’s adventure begins when her arch-nemesis, the pirate captain Risky Boots, steals a mysterious artifact that holds dark secrets. It’s up to Shantae to save the day and keep Risky from obtaining whatever power is hiding in the artifact by exploring the world of Sequin Land and finding the magical seals. It’s all pretty straightforward and bare in terms of plot, but there are some really charming characters and funny dialogue to spruce things up. 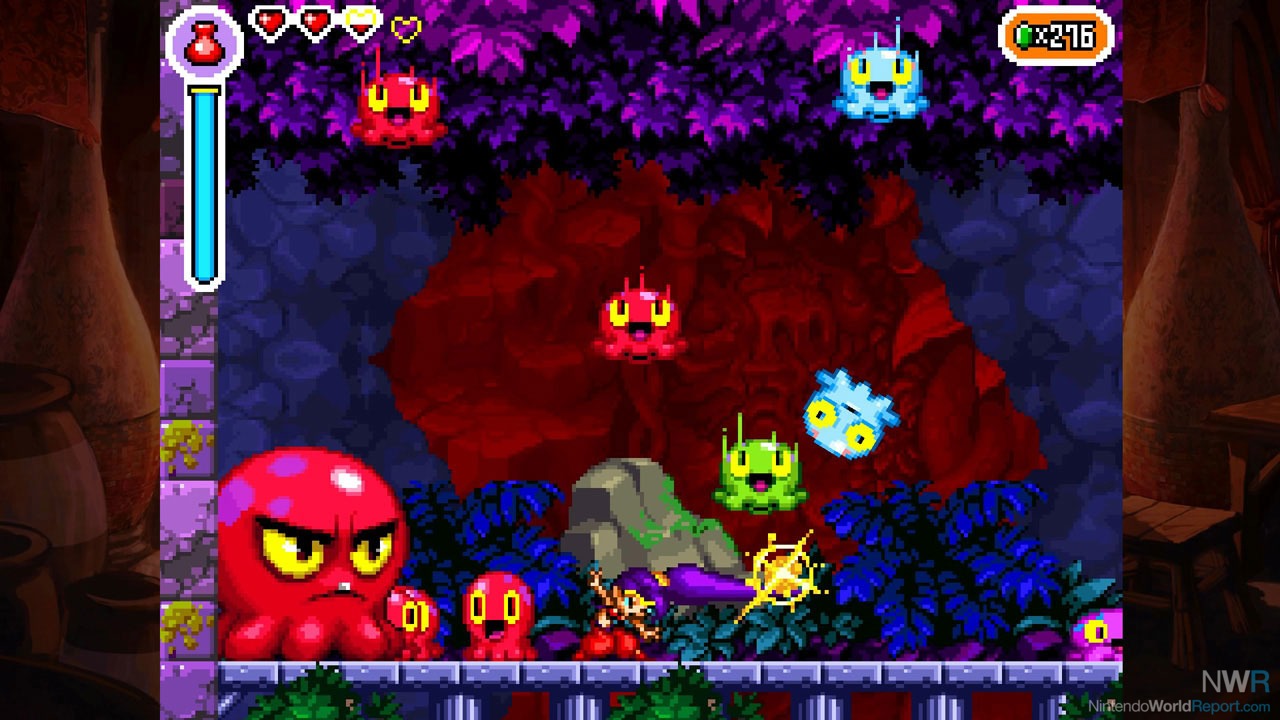 Once the brief intro ends, the player is given the reins to explore as they wish. In true Metroidvania fashion, there are several areas that you won’t be able to reach until you’ve found the required transformation. As a half-genie, Shantae has magical powers that allow her to transform into various animals, from which she gains new abilities. The monkey transformation allows her to climb up walls, and the elephant transformation allows her to smash through boulders and other obstacles, for example. Each new transformation adds a new wrinkle to the gameplay, and allows players to find hidden items and pathways that were previously unavailable to them.

All of that would require a lot of boring, repetitive backtracking if it weren’t for the extremely convenient warp stones placed in a handful of locations across the world map. These warp points become incredibly handy, as you’ll have to use them an awful lot if you want to collect all the Magic Jars in order to fully upgrade all of Shantae’s abilities. Thanks to the warp stones, however, backtracking rarely felt like a pain the way it does in other games of this type. 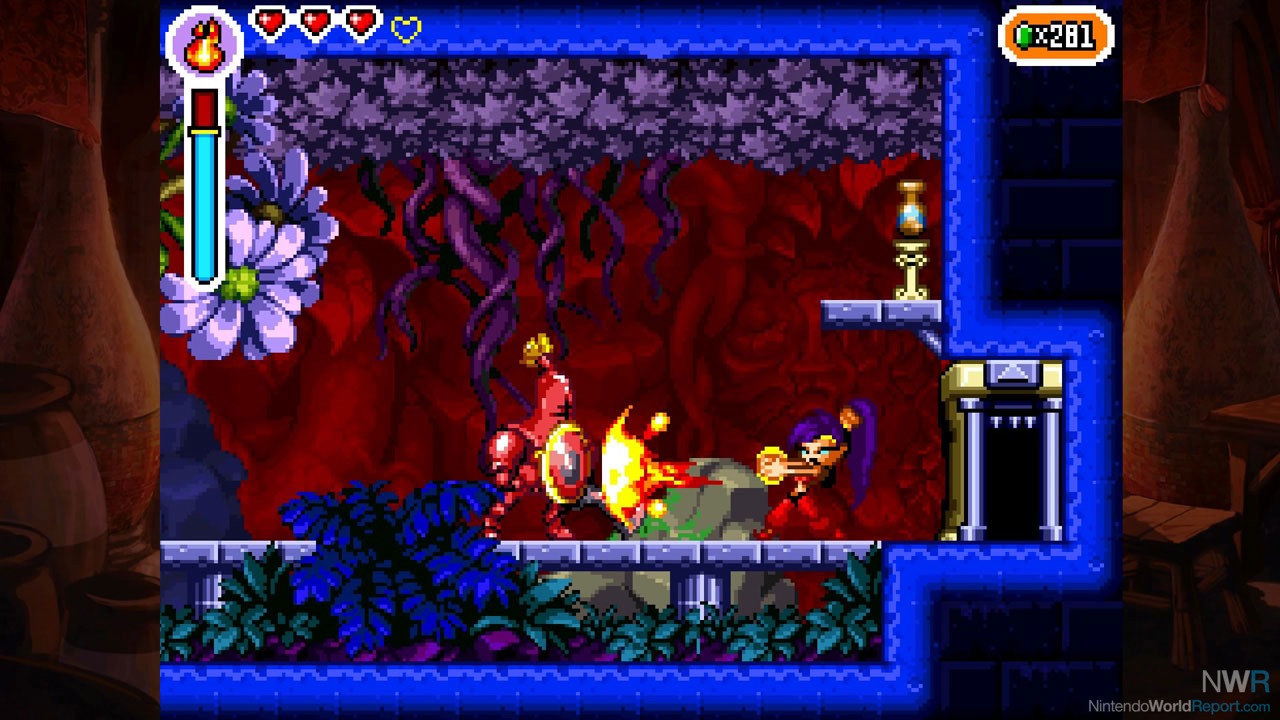 And you’ll definitely want to collect as many Magic Jars as you can. At the beginning of the game, all Shantae can really do is use her long, purple hair to whip opponents into submission. By collecting jewels dropped by enemies, and Magic Jars hidden throughout the world, you can purchase upgrades to whip your hair faster, shoot fireballs, increase your maximum health, and other conveniences. And while I found that some abilities were much more useful than others (with some being completely useless for most parts of the game), they really leave you feeling more powerful as the game progresses.

Exploring Sequin Land is mostly a joy, because the combat is so satisfying, and the environments and characters within them look incredible. Risky’s Revenge was clearly a labor of love by WayForward, and it shows in the little details in every pixel. Character animations, especially, are wonderfully detailed. The game looks especially good when playing Off-TV on the GamePad screen, which was my preferred way to play. The three different dungeons in the game, however, are a bit of hit-and-miss. Two of the three dungeons are great, but one in particular fell flat for me. Rather than being a dungeon to explore and solve puzzles in, this one took the approach of being a battle tower, where I just had to plow through enemies for 10 levels while being timed. I probably wouldn’t have minded if this was just one dungeon in a game full of them, but when there are only three main dungeons, it made this one stick out like a sore thumb.

I had a lot of fun playing through Risky’s Revenge. And while it was ultimately a shorter experience than I’d have liked, it most definitely didn’t wear out its welcome. A clever, charming Metroidvania with some intense platforming bits, Shantae: Risky’s Revenge – Director’s Cut is a must play for fans of the genre.

Risky's Revenge to me has always felt like an incomplete game because of the nature of it's initial release. it's a game that's scope is blunted and as a result, I actually prefer the GBC game to Risky's Revenge.


Still, this is a good review.

I have Risky's Revenge on my iPhone. I need to sink more time into it when I get the chance. The problem with so many cheap games is that one builds a backlog quite quickly!!!