Return to PopoloCrois: A Story of Seasons Fairytale Review

Do you need a little dungeon crawling with your farming simulator?

Not every game on the market has to be dark, gritty or excruciatingly difficult. There’s plenty of franchises that have that down pat. Some gamers want an experience to relax with and the farming simulator genre that Japan loves to put out is perfect. But, what do you get when you combine that genre with a JRPG? You might think Rune Factory, which is true, but you also get Return to PopoloCrois. Considering these two titles are actually developed by the same company, trust me, one is not a rip off of the other. There is actually an entirely different vibe to Return to PopoloCrois that gives us something a little unique to look forward to on the 3DS. 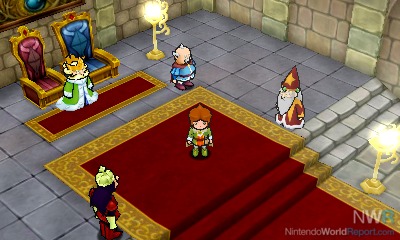 The story of this game harkens back to the JRPGs of the SNES like Final Fantasy and Chrono Trigger. A brief recap at the beginning familiarizes the player with the general happenings of the series, based on a fantasy manga that’s been releasing in Japan since 1978. It flows well as a tiny prologue to the game, getting you up to speed without dragging out into too much detail. Then, you are immediately thrust into the thick of things as you control a knight, Gomer, who is responsible for finding the wayward Prince Pietro, your protagonist. This segment, including a short mission to deliver a gift to Pietro’s friend Narcia, serves as your tutorial to the game, but it moves so quickly and smoothly that only the pop-up menus give it away. It was a relief to get my feet wet doing something that felt actually connected to the story and the characters, instead of the obvious training missions or step-by-step battles against striking dummies that I usually slog through.

Pietro’s homeland of PoPoLoCrois may be peaceful, but before too long, he is thrust into a strange new place by an evil (though none too clever) sorceress. To get home, he has to help rid the country of Galariland of its Black Beasts and revive the land to awaken its protector. After all, what is an adventure without battles? RPGs are partially characterized by how intuitive and easy their specific battle system is to learn because—let’s face it—that’s half the game. Return to PopoloCrois uses a movement-driven, turn-based battle system, with a mixture of individual skills and pair techniques that depend on the composition of your party. Most of it is the pretty standard fare, but’s a fair bit of strategy beneath the simplicity. Positioning relative to the enemy is important, as attacks from the rear and flank do more damage and have a higher chance of critical hits, but knowing each character’s movement distance and strategizing how to position them becomes a little complicated depending on the number of enemies and the placement of any obstructions on the field. Placing yourself to one enemy’s flank could leave you open for an attack from behind, so you need to be paying attention and using each character’s specific turn to the fullest. Spells/skills also usually deal in an area of effect (AoE) and will need creative placement to get the best results. Spell cost is expensive, however, so more often than not, you’ll choose the “whack it to death” route and save yourself the trouble. It’s all quick to pick up on and fairly interactive so that the battle itself doesn’t become tedious to play. 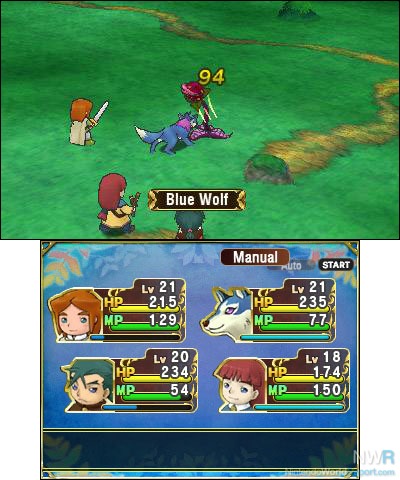 While battling in Return to PopoloCrois does take more engagement than a standard turn-based system, the difficulty curve in this game is low—very low—and it can make a high volume of battles mind-numbing. On a normal difficulty, I found myself never having to use items to heal and rarely running low on MP as a result of spamming healing skills, even in boss battles. I never had to make risky decisions that might land a crucial character dead on the field because everyone was dying all at once. The curve does increase some if you raise the difficulty, of course, but it’s very clear that challenge is not the focus of this game. Fortunately, developers did offer and option to lower your monster encounter rate at any time from the menu. If I knew I didn’t need to level grind any more in an area, I often switched it to the lowest setting just to save myself from getting too bored.

The adjustable encounter rate was perhaps my favorite game feature, weird as that sounds, because it meant that I could alter my game depending on my current focus. Pietro has a world to save, but also a farm to tend and people to befriend/romance! How do you do it all? To start with, it’s actually very difficult to keep up. Traveling in the beginning of this game is almost painfully slow. Do you really want to visit Emilia in the village when it takes ten minutes or so in real time to climb down from the top of a mountain? She’s not that cute! Usually this dilemma left me really focusing on one thing at a time. If I was going to do things with my farm or try to meet up with people, I would lower my encounter rate to make it quicker to move around the map. On the other hand, if I was in the middle of doing a story quest, I would kick it up a notch again so I was adequately prepared to take down an upcoming boss. A fast-travel item is added within the first few hours of the game that takes the difficulty of traversing the map and throws it out the window, so while this wasn’t as important once I could teleport from place to place, it was still nice to have available. 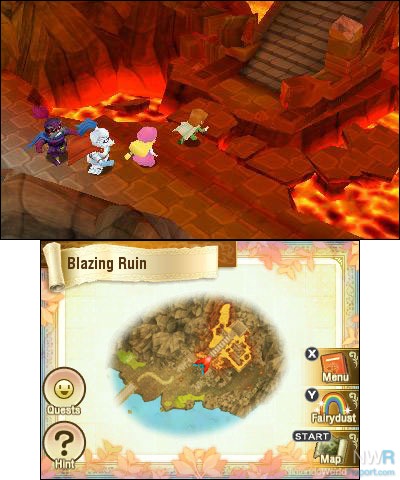 Progression through the story of this title is marked by your gradual completion of dungeons. There are minor ones, called field dungeons, and major ones that serve as your story goals. I honestly found this part of be a lackluster blemish on what was overall an enjoyable experience. The first field dungeon I encountered, I enjoyed. But four or five of a good thing in a row generally makes it less fun. Aside from the variation in the scenery between fields and new versions of small, random maps, field dungeons just didn’t offer much; just more of the same easy battles with a marginally harder boss. Oh, and do hope you don’t miss anything in your first attempt. In order to grab any chests you might have accidentally passed by, you will have to start all over. It’s not hard, but it is tedious. On top of that, major story dungeons weren’t much different, just larger with more elaborate scenery—sometimes.

However, while Return’s appeal as a dungeon-grinder can be disappointing for some, most people will find its endearing story and accompanying visuals a highlight. Specific moments in the game, such as meeting the “blessed” girls of Galariland, have fully animated cutscenes. The art style, characterization and cutesy moments make these a welcome addition, even if the English voice tracks can sometimes be positively grating. 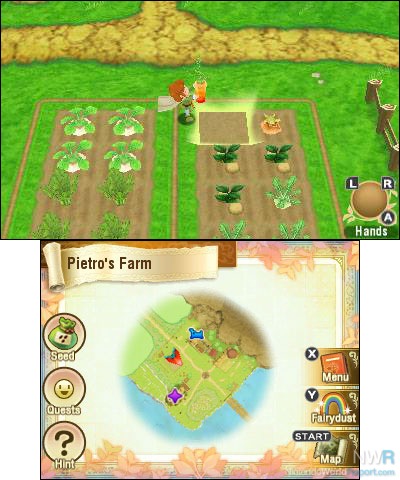 The incorporation of Story of Seasons’ gameplay becomes single-handedly one of the most enjoyable aspects of the game. At the beginning, it can almost be easy to forget about when you’re first trying to dig in to the story, but it quickly becomes more than just planting a couple crops to line your wallet. Acquire new items, fuse new recipes and products with the synthesizer or use them for gifts and side quests that pop up seemingly everywhere. Farming in this game could be its own separate title, unsurprisingly, and it doesn’t share in any of the same extreme-micromanaging and tedium pitfalls that Story of Seasons did. And Return ensures that you never miss a beat when it comes to your farm, giving you notifications the instant something needs care or harvesting.

If that’s not enough, bug-catching and mining elements are blended right into your main map exploration. As you’re on your way to the next village or dungeon, shining stones and patches of flowers off to the side yield up new products and resources, barely diverting you for more than a second while still adding to the experience.

Return to PopoloCrois creates a vibrant world full of charm, fulfilling achievement and classic storytelling. The two different play styles of the JRPG and farming sim come together for something with a surprisingly new feel, and while some components could have been developed better, other pieces bridge the gap to deliver an experience that is well-rounded and worth a look.

I really liked the PSP game way back when so I'll have to pick this up when I get a chance.

I think this game looks immensely charming but if the combat and dungeon crawling isn't good I won't bother. At least until it's way cheaper eventually.

I can get this for $30. Would you recommend it for that price?