In the deepest vacuum of space, perfecting puzzles is all what matters.

When a title comes out of nowhere, I give it a fair shake to see what is up. 6180 the moon is one of those games where I saw a few screenshots and I knew instantly that I had to try it. I had no idea if it would be good or not, but it seemed to have some heart and instantly made it appealing. After finishing the game, I knew that I made the right choice.

6180 the moon is a sidescrolling puzzle platformer, in which you maneuver an orb left and right. This orb will have to be dragged to the goal at the end by timing your jumps wisely and constantly keeping your position in check. Unlike most games in the genre, however, you don't lose if you fall at the bottom. Falling and jumping is heavily encouraged as different worlds are on both of your screens. By constantly switching between the Wii U GamePad and television, it creates a novel experience where you really have to stay focused.

This might take getting some getting used to in the early stages of the game, but the game eases you in at a decent pace. There are spikes that will try to screw with you and sometimes even require you to string together perfect jumps. Luckily, there are checkpoints in place so that stress barely even plays a factor while playing, which is nice. One thing that annoyed me with the puzzles is that you sometimes have to try things with blind faith and have no idea if they are going to succeed. It creates an annoying situation once in a while, but these moments don’t come up very often.

6180 is a brief game;it is over after three hours or so. There isn't much in the way of extra content or really a reason to replay levels. The story that it is trying to tell is fascinating, but after going through it once, there is no desire to start the journey all over. 6180 has a simple look, but one that I found extremely appealing. Things were kept light to keep the eyes focused on the task at hand, which was the right way to approach it in my eyes. The music adds to that experience and gives it an eerie feeling as well!

While it ended sooner than I would have liked, I really enjoyed every second of 6180 the moon. It tells a fun tale about saving the sun and learning to understand the universe along the way. The variety of puzzles were also impressive, even if a few leaps of faith were troubling. The title's biggest accomplishment lies within its gameplay mechanics and how this Wii U version is set up. The GamePad functionality seems simple at first glance, but it is a true game changer in motion. It must be witnessed to be believed!

I'm getting this on your recommendation. Thanks! 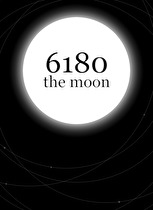