Where everybody knows your name and they are not glad you came.

When I got Devil's Third in my hands, I was hopeful that this could be the B-Movie action game I had been waiting for. As I played through it and got to explore everything it had on offer, I barely smiled while playing. It wants to bring new life to the action genre, but it does nothing to really satisfy it.

The story mode is where you start your journey and this is where Devil's Third started losing me very quickly. You play as Ivan, who has an assignment to rid the world of a terrorist group that he used to be part of. They have taken down the satellites surrounding the globe and it all comes to brutal combat, which seems to be this Russian's expertise. Brutal are also the former members of said group, who are fully aware of what they are up against. This will bring back painful memories for either side, which should bring it altogether for one epic final. 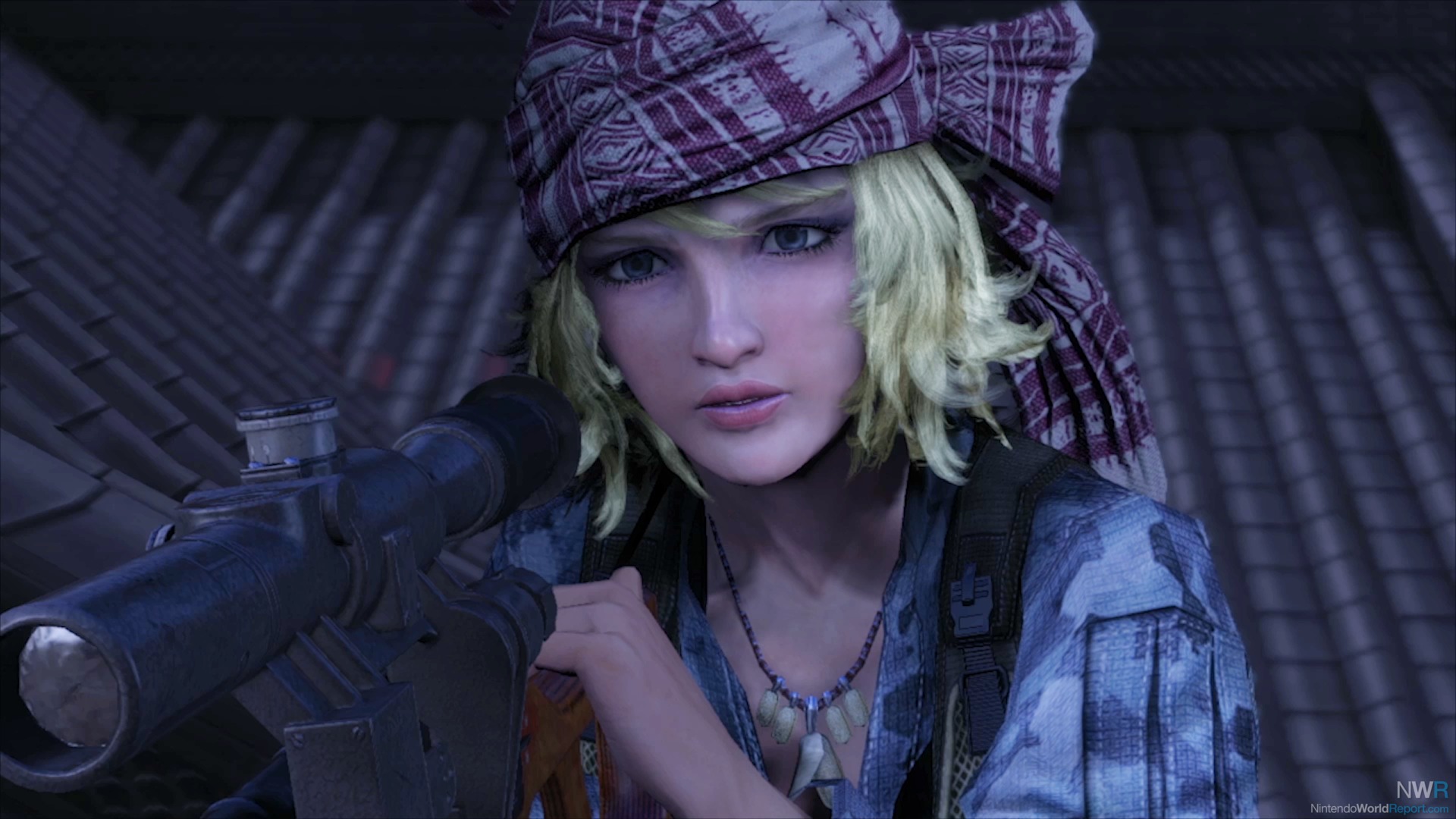 Well, should is the keyword here. That should be case, but the plot is really tacked on and gets barely any time to really develop. You don't know these characters or learn what exactly the motives for their actions are. It all comes down to them wanting to create a world order and they just see Ivan as an obstacle in their way. There are attempts at character building with Ivan and his close female friend C4, but even that leaves gaps and delivers an overall weak impression. You don't even get to think about the fact that she has the permanent physical appearance of someone who is 16. Outside the military or Ivan himself, none of the other characters get enough time to develop. The voice acting also varies wildly in quality, though, for me, it wasn’t that much of a distraction. They made a couple of scenes actually fun!

What I find the most frustrating about the single-player portion, is that I really had to get used to the gameplay. You shoot your way through the majority of the adventure, and that gets old quickly. The various weapons have weight to them, but controlling them feels a bit stiff. There are melee weapons, similar to how Itagaki used to have them in Ninja Gaiden, but that aspect is truly minimized. It is a big shame as I loved to play Devil's Third in that way. The weapons were just presented as an extra option next to the constant shooting and the game treats it as more of a bonus than a driving force. There are one or two fights that make use of them, but it isn't simply enough to make it impactful. In the end, it was more a cover-based shooter than a true action game.

After roughly five hours, you are done with everything the campaign has on offer. You can try out a special Score Attack mode, but I wouldn't really recommend it. They included some extra obnoxious quests to test your skills here and that is as stupid as it sounds. In one instance, I had to collect chickens and that really wasn’t entertaining to do. You also get points for every action you do including shooting and melee combat. It is honestly an interesting touch, but seeing HEADSHOT appear on the screen every time has its limits. 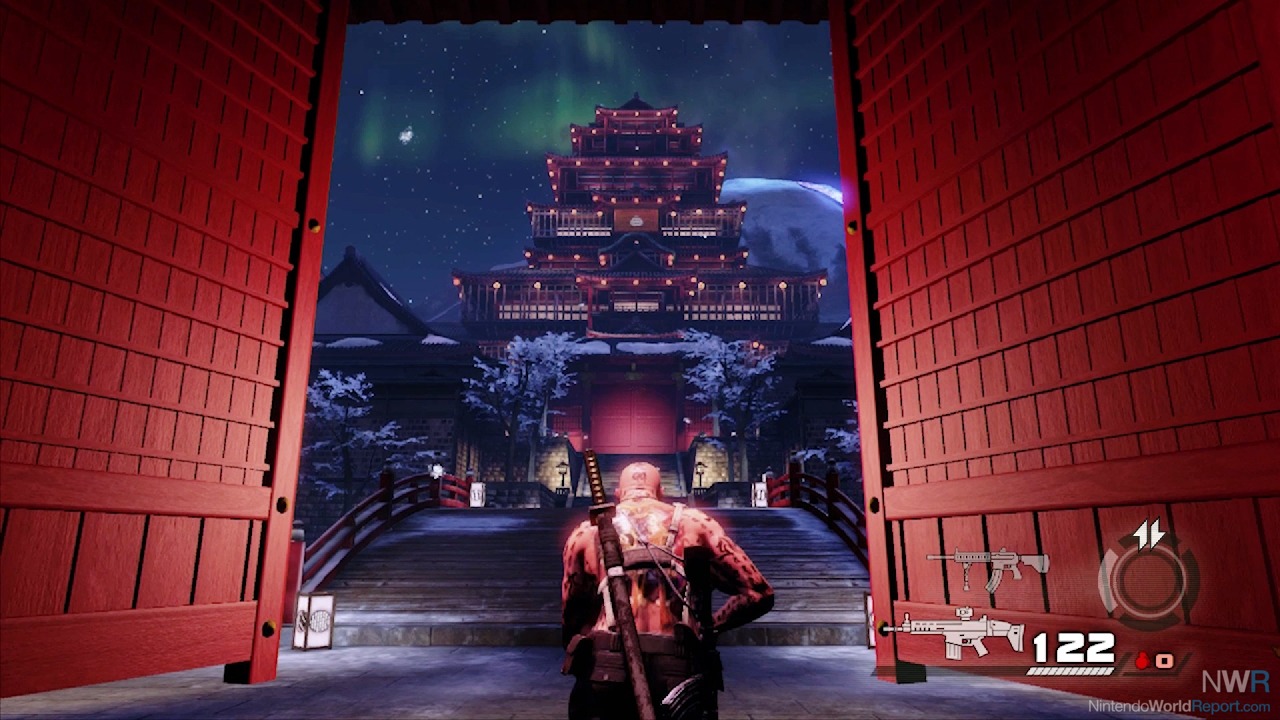 I had more fun with multiplayer, though it hasn't been exactly a crowded experience. Before you get truly started, you will have to make your own character and there are a variety of elements so you can adjust it to your liking. After some introductory missions, you are free to go where your heart desires. At its basics, there are two modes for you to choose from and these are Drill and Siege. In Drill, you will find your more standard options like Deathmatch, but there are some original modes as well to complete the roster. A good example of this is Gladiator. There is just a single weapon on the playing field and you will have to find it quickly to score more points easily. Another interesting one is Carnival, in which you throw fruit into a mixer in the stage to score points.

Siege is other big thing here and it has been the part that has been mostly promoted. You will join a clan somewhere in the United States of America, build a fort and duke it out against other clans in all out barrage. At least, that is what I think Siege is all about. The problem with this and other online modes in the game is that not many people were playing them. This might change when the game releases, but I do sort of doubt it sadly. With so many options to choose from, the limited amount of players will be spread across all possible game modes and that isn't what I can call great for a potential online community. A few modes won't even start until a threshold of players has entered the room and that is problematic.

The matches that I did play weren't exactly all that fantastic either. The gameplay can be good enough, but there is a huge risk of it being overly chaotic. You may try your best to shoot at the opponent, but if they come up close, they can knock you out cold and easily overtake you. This makes the experience not all that perfectly balanced and the various types of players haven't been fully been taken into account. Winning is important at the end as it earns you money and Golden Eggs. While money is used to unlock more weapons, Golden Eggs unlock special elements and more options to personalise your character. The controversial aspect here is that you can purchase Golden Eggs in the Nintendo eShop, so that you can pass on all the grinding that you have to normally do. 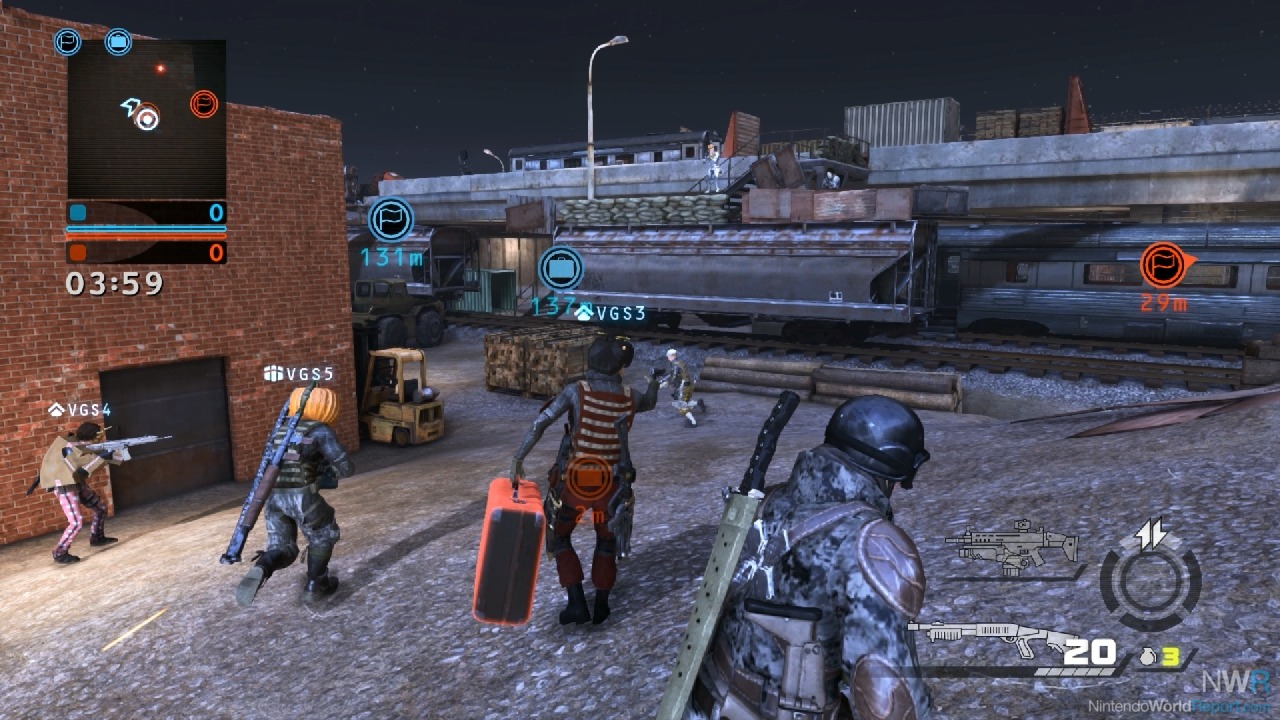 It took a little while to get used to the controls of Devil's Third. After playing around with them and toying around in the options, it did all become slightly better but never impressive. The third-person perspective is a big factor in that and I wasn't always sure if I was hitting enemies or not. I found myself constantly using the ironsights to get any real work done. Melee combat felt more direct and satisfying, though again, that only pays off in the multiplayer portion of the game. You can use either the Wii U GamePad or the Pro Controller to control your character and both of them seem to act exactly the same. The Wii U GamePad offers off-TV Play and you can go through various menus in multiplayer. It can used to chat with other players and read new announcements from the development team. Sadly, the GamePad does stay fully black if you are playing the game's singleplayer campaign on a television.

Most of the environments in Devil's Third are really drab looking. They are exceptions to that rule, like a Japanese-inspired town in the singleplayer. It featured bright lighting, moody squares, and dark pathways. I would go as far as saying that this was my favorite part of the entire game. The main character models are rendered nicely as well, but all the opponents are ugly again. There isn't consistency in the game's presentation and that is rather annoying state of affairs. Technical problems are also littered across the board, particularly in the singleplayer campaign. Devil’s Third wasn’t free of screen tearing and dropping frame rates. Bodies and dropped weapons floated above the floor a few times and enemies were in rare instances glitchy. The music and sound effects weren't all that special, but they did their job well enough I suppose.

I can't call Devil's Third one of the worst games I've played, because there are a few redeeming qualities. The developers have put some legit work in the multiplayer options, and the variety on offer is greatly appreciated. I don't predict a long life for these options as everyone will be mostly spread out and tackling one or two at the time. There are also balance issues, which could badly hurt the effectiveness of the weapons. The single player mode is the bigger mess here though, as I barely enjoyed myself throughout. There were a couple of cool scenes, but outside of that, there is nothing there to truly hold you over for long. With just five hours on the counter, barely anything gets time to truly sink in. Add to this the technical issues and the inconsistencies of the presentation and you have a game that could have benefited from a bit more playtesting.

And the inevitable passed.

Almost as insulting as the infamous double Mario Kart 8 reviews. Next time, learn to play the game before bashing it so relentlessly.

Half points are for the weak of mind. Go big or go home.

I can't wait to hate-play this next year when Nintendo once again goes through another summer without releases.

Looking forward to this one ... eventually (i.e., massively discounted).
In related news, I just ordered a copy of Disaster: Day of Crisis (after finally locating where my wife stowed my hacked Wii. Man she is a good hider).

I can't wait to hate-play this next year