Badlands: Game of the Year Edition (Wii U) Review

The scenic adventure won't live up to its name, but how does it fare on Wii U?

The original Badlands released on iOS and Android in 2013 and was much beloved by the mobile community. It was nominated for three BAFTA awards and won an Apple design award, making it one of the few games tagged with “Game of the Year Edition” that might have an actual argument for it. Now that the game will be on Wii U, the potential that made it a mobile hit shines through, but there are plenty of frustrating moments to go along with it.

Badlands sets you out as a round, flapping bird-like creature known as a Clone that is trying to work its way through a series of obstacles to escape from the game's one hundred forced-scrolling stages. You can use various power ups to change how the Clone operates: power ups let you shrink or grow the Clone, add one or several Clones for obstacle manipulation, speed up or slow down time, stick to substances or even set yourself endlessly spinning. The analog stick and A button are used for movement as you try to avoid buzz saws, boulders or even slipping off the left side of the screen, all of which will set you back to the stage's last checkpoint. The 100 stages are separated into two “days,” broken down into dawn, day, dusk and darkness, plus two groups of ten bonus levels. There's a good sense of accomplishment as you can actually roll credits at the end of a day, while the obsessive can go for 100% level completion or focus on getting all of the game's achievements. Although the game does have multiplayer, it is local only and could not be tested during the review time. Beating groups of levels in single player is necessary to unlock multiplayer levels, which may be a frustration for some. 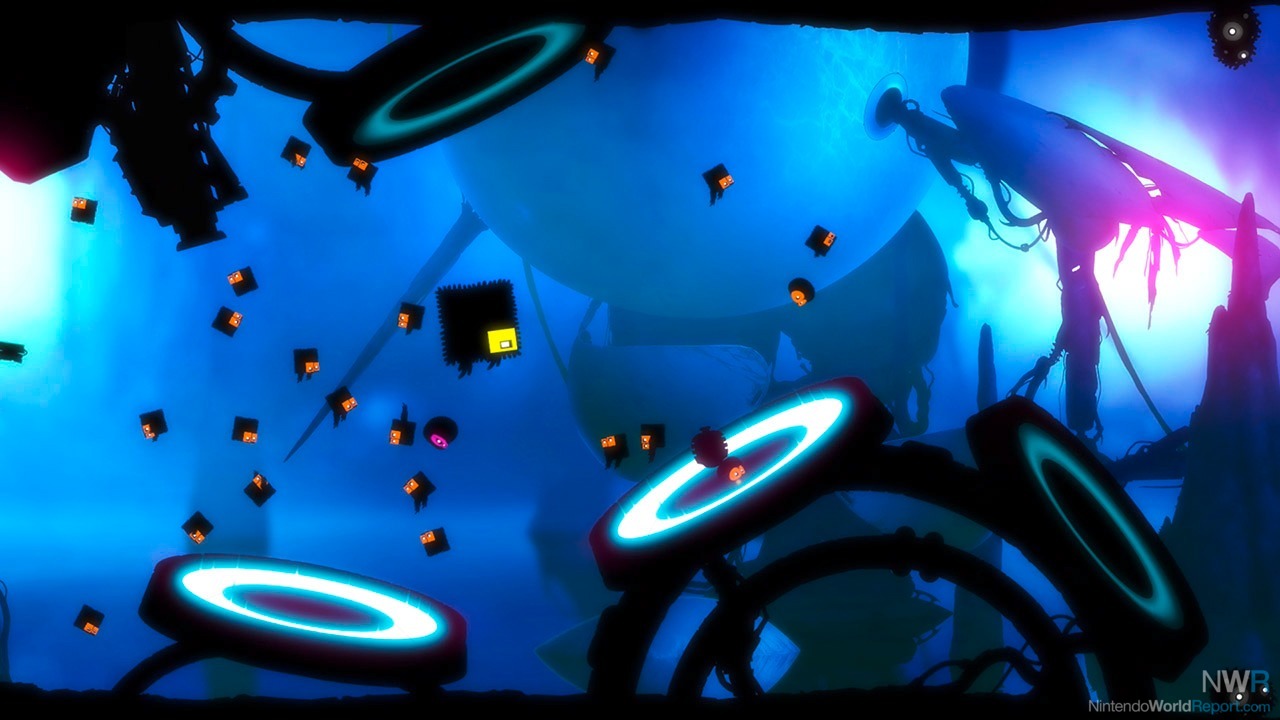 The game has a very minimalist aesthetic – the Clones are simply designed and the obstacles are drawn in all black. This lets the backgrounds and power ups stand out to the eye, and the backgrounds especially are attractive and accurately reflect the time of day you're playing in. The jungle atmosphere carries over to the music, which focuses on the sounds of a jungle with various animal cries interspersed with the sound of buzz saws or boulders hitting the ground. The atmosphere in the dusk and night levels is especially foreboding, but this ends up causing problems when it's so dark that switches needed to progress are obscured.

Badlands was originally designed for a touch interface before being ported to consoles, and for the most part it works – but some of the power ups can cause a great deal of frustration. The main issue is the spinner power up, which is meant to have you roll along surfaces but seems to switch controls halfway along a platform and send the clone careening left off the screen or dropping into a buzz saw. As well, although the game does a good job of check-pointing in the early levels, the second day loves to force perfect runs by sending you back to the start even if you die on the last obstacle before the goal. There is a skip to checkpoint button that comes up after several deaths, and it skipped over the frustration points but also jumped over entire levels in some cases. Thankfully, the game does have a “return to checkpoint” option if you know you're in a no-win situation, which will happen quite often.

If I had written the review after I had cleared Day 1, I would have been ready to give Badlands some awards. The frustration of the later levels and all the level skipping that I did to see if it would improve really left a sour taste in my mouth. There's a really good game here, just know your frustration point and be ready to jump out when it gets there.

A code was provided by the developer for this review.