You might have missed out on Thunder Blade in the past, but don't sleep on this Sega 3D Classic.

I don’t blame you for not being excited about 3D Thunder Blade. With limited availability of the original arcade cabinet here in the West, most people’s only experience with the game was the slow and clunky Genesis launch title, Super Thunder Blade. Luckily, Sega and M2 have created the definitive version of Thunder Blade with this 3DS eShop release. 3D Thunder Blade is fast, fun, and surprisingly impressive - especially if you have a New 3DS. 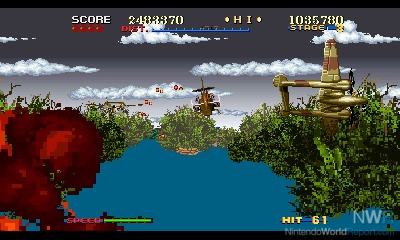 If you’ve played Thunder Blade’s closest cousin, After Burner, you should have a decent idea of what to expect. Rad scrolling sprite visuals and frantic "shoot everything you possibly can with bullets and missiles without getting blowed up" gameplay. But this time, you’re in a cool helicopter rather than a cool fighter jet. The other major difference between Thunder Blade and After Burner is the shifting perspective. While After Burner’s gameplay took place entirely from a behind-your-craft view, Thunder Blade mixes it up by sprinkling in some top-down sections. These segments, which appear at the beginning of stages and some boss battles, offer a fun, Xevious-like experience, and look awesome in 3D with their fantastic environmental layering.

Actually, the whole game looks awesome in 3D, which is especially great if you’re playing on a New 3DS. While all the Sega 3D Classics dating back to Space Harrier have had great 3D, I think Thunder Blade may be the best yet. I find myself keeping the 3D on for the entirety of my playthroughs, which doesn’t cause me too much strain, as the game is quite short. Thunder Blade consists of four stages (which are selectable after you complete them) and each one takes about three-to-four minutes to complete. 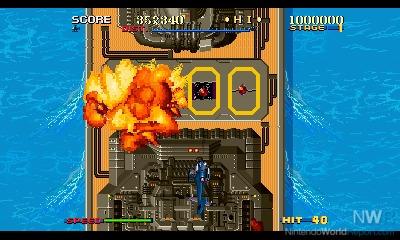 After completing your first playthrough, you unlock Special Mode (exclusive to this version of the game). Here, you play the stages sequentially on a limited number of lives/continues, earning more lives by defeating enemy crafts. Decimating your foes feels even better in this mode thanks to the new "super missiles," which are powerful, screen-traversing enemy-exploders. The new missiles feel weighty, crunchy, and destructive. However, the real shining feature of Special Mode comes at the end of stage four, when, after defeating the final boss, an all new fifth stage opens up. The transition into this new stage is seamless, and what M2 has created here is arguably the coolest level in the game.

Another cool feature of playing the game on a New 3DS is that it supports the Circle Pad Pro/C-Stick. You can choose to use this to manage your chopper’s throttle, which is a nice touch. As would be expected from a Sega 3D Classic, there are plenty of tweakable settings (like being able to drop the difficulty to avoid taking damage from hitting buildings) to suit your playstyle.

If you’ve been ignoring Thunder Blade for the past quarter-century, it’s time to take notice. 3D Thunder Blade is not just a great arcade port- it’s one of the best pick-up-and-play action games on the 3DS.