An entry that doesn't add much to the formula.

With every Mario vs. Donkey Kong title, new elements are introduced to keep the experience robust. It is what kept me intrigued in the series for so long now. The puzzles in the latest entry Mario vs. Donkey: Tipping Stars, available for Wii U and 3DS, aren't the issue; instead, it is lack of fresh ideas that doesn't make a glamorous entry. Fortunately, the stage creator makes up for some of the disappointment, as there is potential for more challenge and more fun with user-created stages.

If you never played a game in the series, you might be more inclined to give it a look, though. Tipping Stars is a puzzle game where you have to get mini robot versions of Mario characters to a goal safely. You do not take directly control over them. Instead, you guide them by placing blocks and pipes around the level. While you start with only one type of block, each world introduces a new mechanic to keep things fresh. Slowly, conveyor belts and warp pipes work their way into stages to slightly increase the complexity and challenge.

The problem is that ''slightly'' isn't enough. I only had to take a good first glance at the puzzles and plan out a few moves beforehand. While that initial planning is entertaining, the Minis move at quite a slow pace. Once that second phase came, I already double-checked my solution and was settled in my placement. The eight worlds didn’t last too long because of that. There are no additional mini-games or boss battles to give these worlds a bigger purpose (like in past games), and outside that new element that is introduced. This makes Tipping Stars more straightforward than the previous entries.

Luckily, the last number of stages, mostly found in the Bonus Levels section, are quite challenging. It wasn’t until the bitter end that this actually felt challenging. I was able to easily create my own levels in the Workshop, which is where the potential in this game lies. The level creator is easy and fun to use. I can't wait to start sharing levels soon after launch.

Probably the most notable thing about Mario vs. Donkey Kong: Tipping Stars is that the title is crossbuy on Wii U and 3DS. The content that you make in the Workshop can be shared to any user on any platform, which is a really neat touch. There are some differences between two versions though and these are important to point out. On the top screen of your 3DS or your television screen, you will be able to see a broad overview of the level that you are currently tackling. I found the map on the smaller handheld not very useful, while it is perfect if you get on confused on the Wii U. My friends could easily help me out with managing the stage or make suggestions to increase the difficulty of my created level. The regular puzzles are changed up in each version to accompany the difference in screen size as well. Each version runs soundly and the differences are minor.

Mario vs. Donkey Kong: Tipping Stars is a decent game. While it is fun to plan your moves in the various puzzles, the game starts out way too slow and doesn't break any new ground. Once it gets going on the right foot, there is barely a dull moment managing all the bits in the stage. I see myself getting a ton of mileage out the Workshop and Community options, which should keep me engaged for quite a while longer. If you are novice at puzzlers, Tipping Stars might be the game for you. Veterans will have to give this one a hard look, as it might only please them in the latter half of the journey.

I love the Mario vs DK series. But $20? "Crossbuy" is a joke if they are going to charge you 2x they amount they would have if you had to buy them on both systems separate.

And it's an established series. STOP MAKING THE FIRST COUPLE AREAS TOO EASY! (Going off what you are saying, but the last 2 games I've played in this series, although fun, have had the same problem.

It may be an established series, but there is still a chance that this might be a person's first game of the series. They have to respect that.


$19.99 is high price to pay for having a Wii U and 3DS copy and for user-generated content. I can only guess that the price may be paying a little bit for whatever network stuff Nintendo paid for hosting and sharing levels. A miiverse tax, perhaps?

This is my first Mario vs. DK game ever. How is $20 a bad price compared to some of the crap on the eShop is this a remake or re-release of an existing game?

This is an all-new game, marvel, but there's a lot of sameness, similar mechanics and obstacles from past games. If you enjoy the community aspect (i.e. creating your own levels or playing others' creations), then I think the game is worth it.

$19.99 is high price to pay for having a Wii U and 3DS copy and for user-generated content. I can only guess that the price may be paying a little bit for whatever network stuff Nintendo paid for hosting and sharing levels. A miiverse tax, perhaps?

There shouldn't be that much of a difference between network features in this game and Pushmo World. And World is just $10.

This is a crossbuy tax.

I've often heard on the 8-4 Play Podcast that Japanese retailers don't understand the concept of the word "sale." If a store has a bundle of 2 items on sale, you pay twice the price for it. That seems to be what we see here, and it's quite the joke. There's no way in hell I'm paying $20 for a Mario vs. Donkey Kong game that doesn't seem to be all that different from the 2 previous ones, especially when at best I'd only really have use for 1 of the 2 copies I'd be paying for. 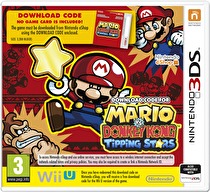