Kirby and the Rainbow Curse (Wii U) Review

It's not all sunshine and rainbows.

I loved Kirby: Canvas Curse back on the DS, because it was the one launch-era game that made the second screen feel necessary. You moved Kirby in an inventive way, by drawing a path for him to ride along on. It was a platformer in which you were consciously creating the platforms. Canvas Curse fans have been clamoring for a sequel lo these many years, and we finally got one—but it’s on the wrong hardware. Rainbow Curse is a Wii U game; that should give you pause. 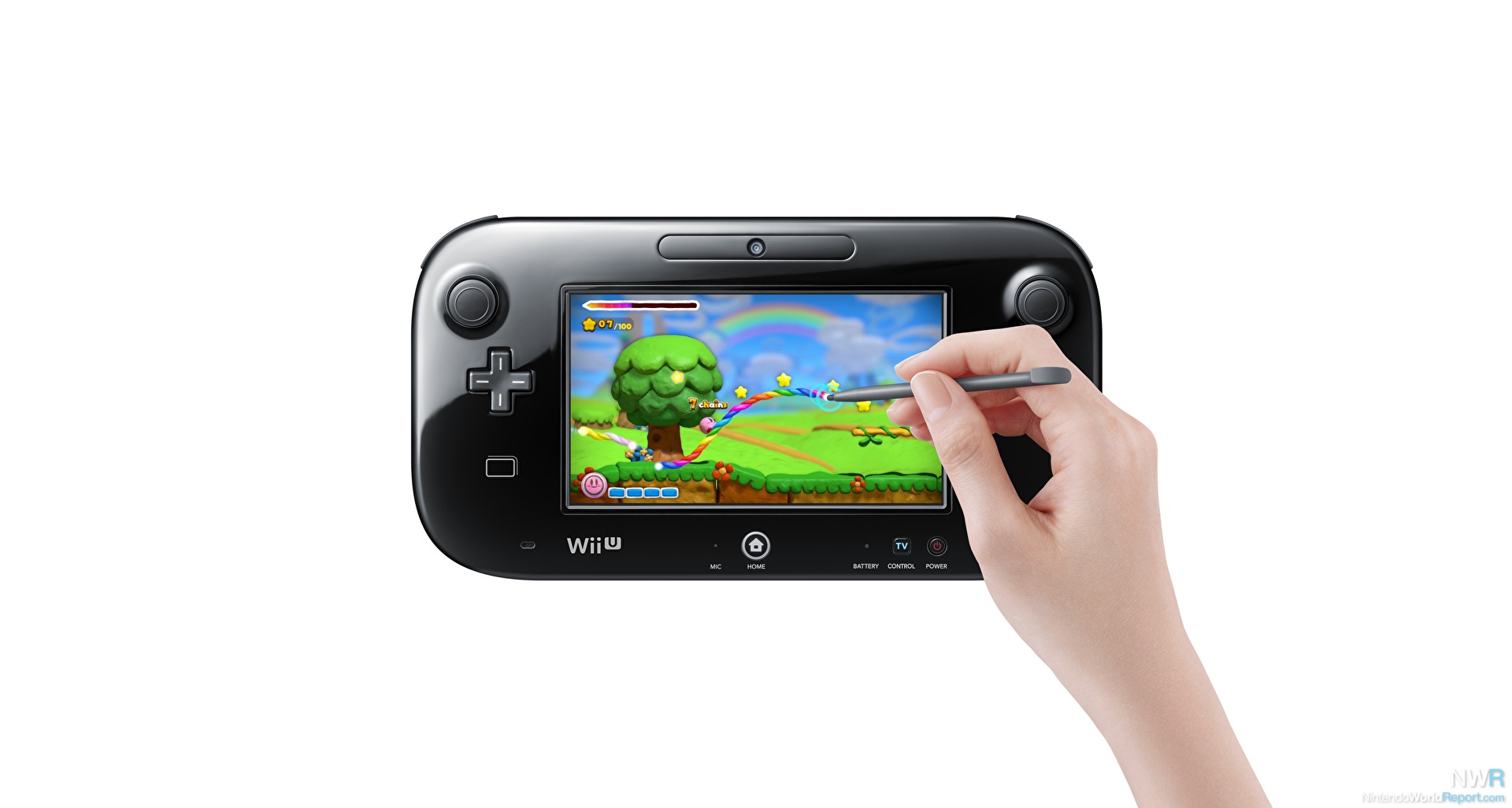 The GamePad is much smaller than my HD TV.

If you think of the Wii U as a giant DS, where the top screen is your TV, it sort of works. But in this case, the top screen is displaying the same thing as the bottom screen, but you can only interact with the bottom screen. The critical difference here is that the top screen in a 51” HD plasma television, while the lower screen is, well, not. You want to look at this game—which is gorgeous—on the top screen, but you can’t. The GamePad is not a Wacom tablet; there’s no on-screen indicator showing where the stylus is hovering over the screen. You are actively playing the game on your GamePad, and all the beautiful claymation graphics are being wasted.

This is the game’s core problem. Many of the subtleties of claymation—the uneven surfaces, the way things morph when hit, the way light and shadow play across a piece of clay—simply don’t show up on the GamePad. They do on the TV, but the tragedy is that the person playing the game gets the short end of the presentation stick. The game looks fine on the GamePad, but all the loving details that Kirby and the Rainbow Curse are built on are in short supply. 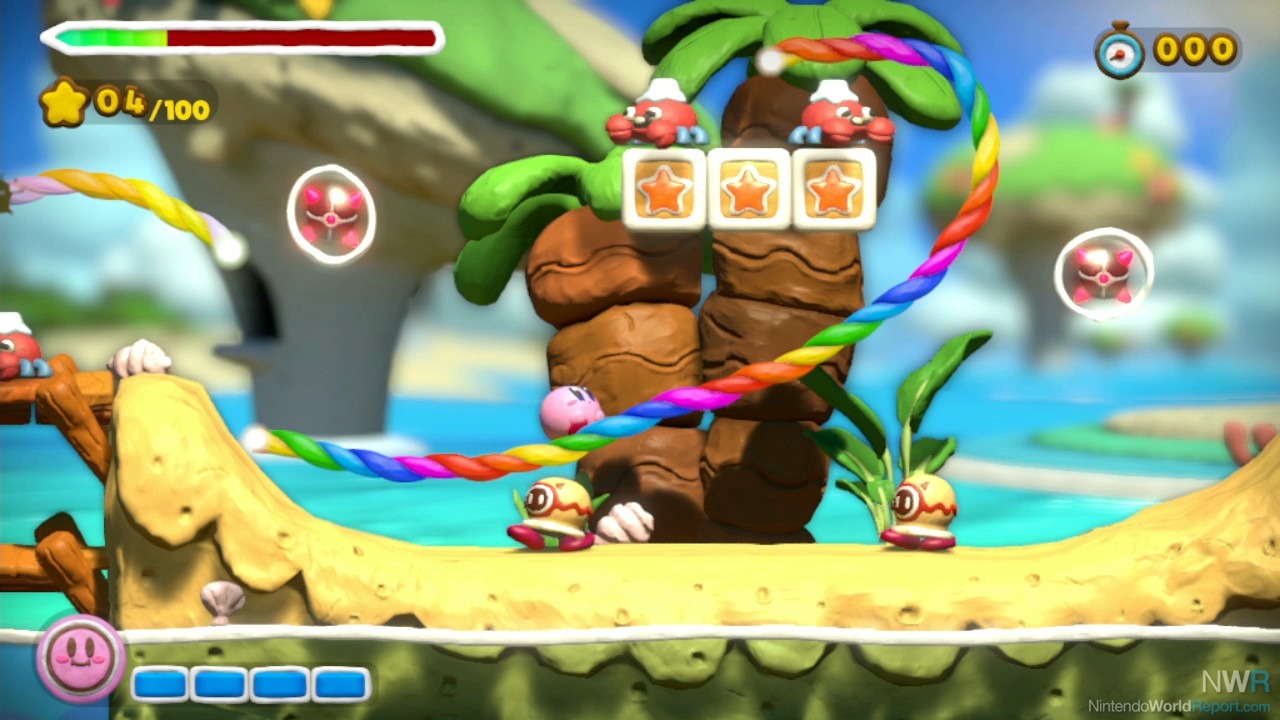 But let’s talk about the game itself. You guide Kirby through stages by drawing a path for him with rainbow paint. The paint does eventually run out, but you can find pickups that refill it for you or you can just wait a few seconds for it to restore itself. Your goal through each stage is to (1) survive; (2) collect all the treasure chests; (3) collect a lot of stars; and (4) grab the Secret Diary in the roulette at the end of the stage. Many stages are open and somewhat freeform, allowing you to explore at your leisure. Others are more directed, either with very specific paths forward or actual forced scrolling. Once Kirby has collected 100 stars (which isn’t hard), he can activate a super attack in which he grows huge and rockets around like a pinball for several seconds, breaking certain blocks in the process.

He’ll also transform into a tank, submarine, and rocket at various times, controlling differently through ensuing obstacle courses. These vignettes are fun diversions but don’t last long. There are three stages and one boss fight in each level, and stages can be quite long, typically clocking in at between 10 and 20 minutes. This is long enough to make you reconsider going back for treasure you missed the first time—especially since many treasure chests are “do it wrong and you miss it” sorts of affairs. Treasure chests contain character models and music tracks—nothing critical to the experience—but the completionist in me is very conflicted. My solution to missing a chest is to die immediately and try again, but the game isn’t heaping on 1-Ups like a New Super Mario Bros. game, so that can eventually take a toll. Lives don’t rain from the sky in Kirby and the Rainbow Curse.

One thing I really did not like: the game reuses bosses. They're tougher the second time, but it's not great.

While the meat of the gameplay is in Story Mode, you’ll constantly be unlocking new Challenge Mode courses. Accessed from the main menu, Challenge Mode features bite-sized chunks of gameplay, arranged into individual minute-long segments. You’re tasked with recovering four treasure chests, with 15 seconds apiece, in each challenge (although there are rare longer ones). Challenge Mode asks you to master certain aspects of the controls, and I really sank my teeth into it. A few of them are very tricky, but completing any given room feels great. 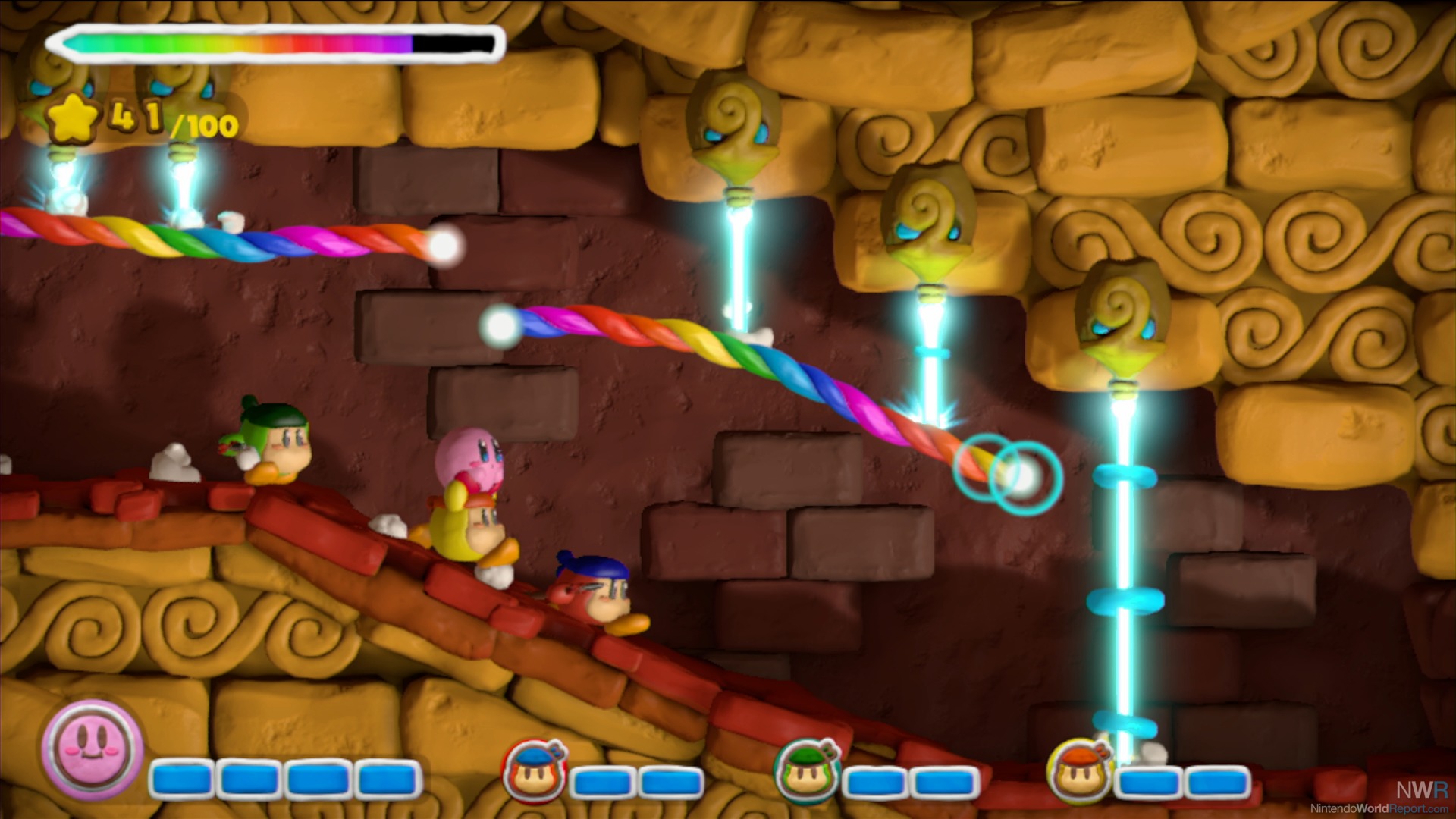 There’s also multiplayer mode for Story and Challenge. Here, up to three friends—playing on Wii Remotes or Wii U Pro Controllers—can control Waddle Dee characters while player one uses the GamePad and controls Kirby. Your pals get to watch the TV, because Waddle Dee controls like any normal platforming character. He can jump, attack, and walk on rainbows, so your friends are likely enjoying themselves more than you are. The game also becomes significantly easier with more people. They can ALL collect puzzles pieces, for example, or help Kirby with crowd control during vehicle segments. Waddle Dee can actually pick Kirby up and carry him around!

In the end, Rainbow Curse is a good game that provides plenty of content for both single players and a group of friends. I’m annoyed by the length of some stages, however, and it’s a real shame that the player controlling Kirby cannot have the same viewing experience that the others players have. Thankfully, the core gameplay remains very enjoyable and I can still recommend it—but you should know what you’re getting into.

Thanks for the review, Zach. I've been on the fence about this one but I think I'm going to wait until it drops in price a bit. I love the aesthetic and I love Kirby music, but the focus on the Gamepad is very disappointing and it makes me wonder who was behind this decision- or rather, it makes me think Nintendo was anxious about utilizing the Gamepad properly and made the display sacrifice to prove a point. Either way, it's still Kirby and I'm sure it's great.

You and I have pretty much the exact same opinion of this game.

...but the focus on the Gamepad is very disappointing and it makes me wonder who was behind this decision- or rather, it makes me think Nintendo was anxious about utilizing the Gamepad properly and made the display sacrifice to prove a point.

What would be utilizing the GamePad properly if using a touch screen to draw virtual things (something that touch screens are fantastic at!) is not? If there is a "right hardware" for this Kirby curse game, then that is the Nintendo DS. I doubt anyone would be anymore kind if a 3DS Canvas Curse game either did not use the 3D dispaly or used the touch screen as a track pad for drawing.


Anyway, good review. The range of opinions and critique on Rainbow Curse has proven to be very interesting. Perhaps more interesting than the game itself? I've only played the first level of the game at a Best Buy kiosk and enjoyed my time. Sadly, I still have Kirby's Return to Dreamland untouched and pine for Triple Deluxe ahead of Rainbow Curse.

I would think that, rather than using the touchscreen exclusively, they would opt to combine the TV and the Gamepad. Maybe have Kirby platform on the top screen and then switch to the Gamepad for Curse-style gameplay.

Anything that doesn't waste this gorgeous art style.

I'm not a big visual-HD-phile guy (I turn streaming video of shows to SD when they were originally broadcast in SD) so I'm not seeing that dramatic a downgrade in primarily using the Gamepad. I think the issue is moreso that unlike Epic Yarn, the claymation aesthetic, while charming, doesn't actually interact with the gameplay meaningfully, which reduces its impact.

Also, I've seen several reviews say it's impossible to keep your eyes on the TV, but most of the time it's doable, it's just those one-off challenge bits for chests that require eyes-on-Gamepad precision. That said, those try-it-once-and-fail chests are pretty lame. And the levels are kind of ludicrously long. I was planning on 100%-ing this game to get the most out of it, but I don't think I can see myself going back through with the chance to fail the one-offs and end-stage roulette (which is a particularly bad idea for a collectible).

Recent Kirby games are weird. Many drop in price significantly - I'm thinking of Canvas Curse or Epic Yarn - and are quite easy to pick up cheap if you wait. A few have limited print runs, like Return to Dreamland or the anniversary collection on Wii, and never seem to drop in price.


Given the current push to reduce physical media in favor of digital distribution, I'd guess that print runs for this Wii U game won't be huge so deep sales will be unreliable.  Hard to say with any certainty though.

When they say "I'll wait for a price drop" they really mean "I'm waiting for this game to be offered for free on Club Nintendo 2.0 or Nintendo Network +."

So today (one day sale at indigo.ca) is the first time I've found the game on sale for less than $40. At the moment it's selling for $22 which seems pretty reasonable.


Thought it interesting when re-reading the review that there was discussion here about whether price drops would happen or not. This game, and most other Wii U titles, do seem to have smaller print runs, and thus fewer deep discounts. Then again, maybe that's just because there isn't much retailer competition in Canada since Target left?