The intersection of math and puzzle gaming is surely a ripe nexus for game makers to explore. But whereas some puzzle games can feel easy-going and comforting, Sumico's combination of math and puzzle gameplay calls to mind an altogether different analogue: the cautious, considered pacing of Chess. This is because in Sumico, if you make a wrong move, you'll find yourself quite literally unable to add two and two together. 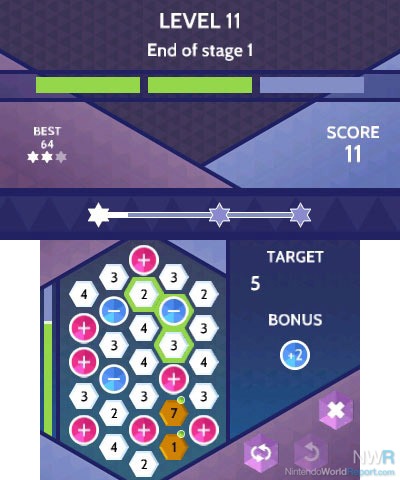 Unlike the somewhat visually similar "Match 3" style games, in Sumico you don't match three tiles of the same sort together, you use the 3DS touch screen to select adjacent game pieces to create the components of an equation, the result of which becomes a new tile on the board. For example, selecting the "3" "+" and "7" tiles in that order (keep in mind: they must be touching) will result in a new "10" tile being created. You score points and trigger multipliers depending on the pieces you use, and the longer and more complex the equation the higher the score. Reach all of a level's target answers and the game will award you one to three stars based on your score at the end. Unlike the pre-defined levels in Campaign mode, the game's "Endless" mode starts you with a random setup, but the same gameplay still ultimately applies. 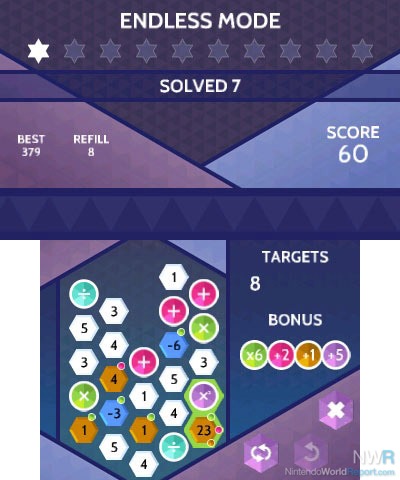 This more complex matching system using both numbers and operators means the key difficulty you have is one of supply and position. As a result, the strategy of the game requires the judicious use of the tiles you have on the board, especially the math operators (plus, minus, divided-by, multiplied-by, squared). The overall effect is that you could end up looking at a Sumico level for several minutes, trying to find a long string of numbers and operators to reach your target, while also leaving enough tiles behind for your next play. This makes the game decidedly taxing and without moments of carefree exultation. You never quite feel free in the game's mechanics; you are always beholden to whether the operators to do what you want exist and are in the right place. 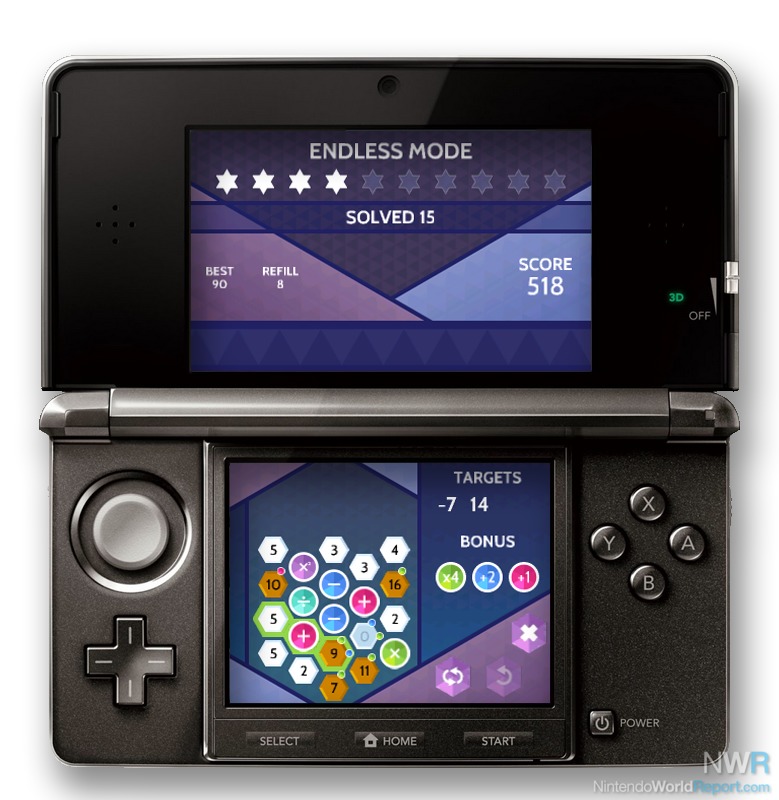 Sumico deserves to be noted for a visual design that's very easy to read on the 3DS screens (It's also worth noting that the title does not use 3D). Neither minimalist or noisy, the game's theme is all about hexagons: the game pieces are hexagons, as are the icons in the game's menus, and even the little dots indicating your place as you scroll through several screens. Lines and triangles help break up the background, and color is used to great effect in visibly indicating which game pieces are numbers, which are plus signs, which are minus sings, which have bonuses on them, and so forth. The visual presentation is also matched by crisp and pleasing sound effects as you select tiles, make equations, and navigate menus. The background music is limited, but its electronic tones are suitably soothing for a game where you're spending a good amount of time not doing much more than contemplating the screen.

In the end, Sumico is novel and intriguing, but far more serious than one would expect. It's not about doing math fast, and it's not about making the first move that you see. Instead, it's about carefully considering each step in a puzzle. Not frivolous at all, Sumico will be most rewarding for players looking for challenge, not candy.