Every man a king, every boss a final boss.

Monster Hunter 4 Ultimate follows a long line of games that manage to be legendarily popular in Japan while only capable of attracting a passionate cult following overseas. Whether this discrepancy was due to accessibility, stigma, cultural differences, or otherwise, Monster Hunter 4 Ultimate is the most accessible the series has ever been. While that might not translate into a smashing success, this is Capcom’s best chance yet. 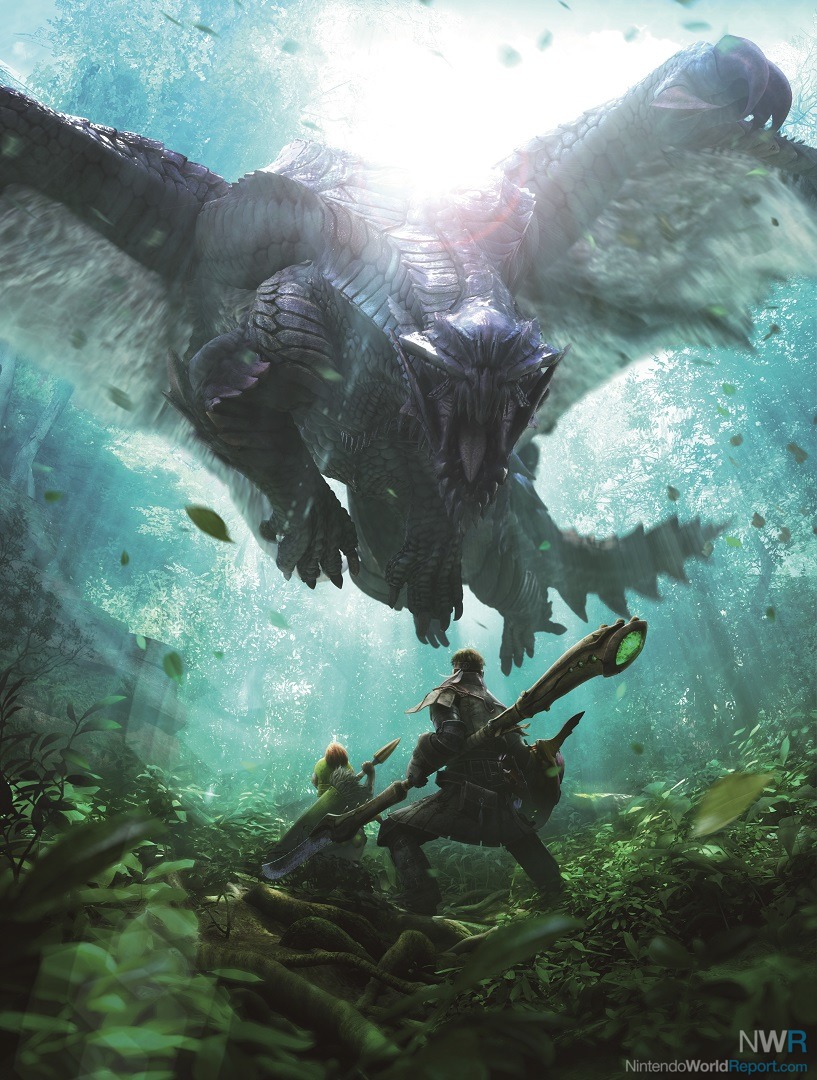 Monster Hunter is a third-person action game in which you fight enormous monsters, kill them after long stretches of exciting combat, and then use their remains to make really crazy, awesome weapons – which then allow you to fight even crazier monsters, make even crazier weapons, and so on. You also do things like go out on quests, track monsters, capture monsters, craft armor and supplies, and more that, eventually, makes you better equipped to fight more giant monsters and repeat the beautiful cycle. Monster Hunter is wildly addicting, very challenging, and made for people like me whose favorite parts of video games are the boss fights above all else.

In Monster Hunter 4, these mechanics see huge overhauls, namely in the traversal department. You can now climb walls and ceilings, attack in midair by jumping from cliffs and off of walls, and mount monsters. By toppling a monster via jump attack, a mini-game begins in which you climb on a monster and stab wildly at its back to fill a meter, all while being careful to not fall off. Upon filling the meter, the monster falls over for several seconds, giving ample time to unleash a combo. These vertical mechanics give Monster Hunter more of an action-adventure feeling, which is exhilarating and also makes for better questing areas that take great advantage of these new features.

In the past, massive monster fights were extremely confrontational, requiring blocking, dodging, and careful attacks with death only one wrong move away. It’s still possible to play that way, but these new mechanics allow you to effectively ‘hit it and quit it,’ jumping onto a monster, attacking it, and then running away to recover and prepare the next mount. Now, all of these changes make Monster Hunter easier for most of the early game, which is a slightly disappointing trade off. For reference, I barely had to block or roll during the main story. 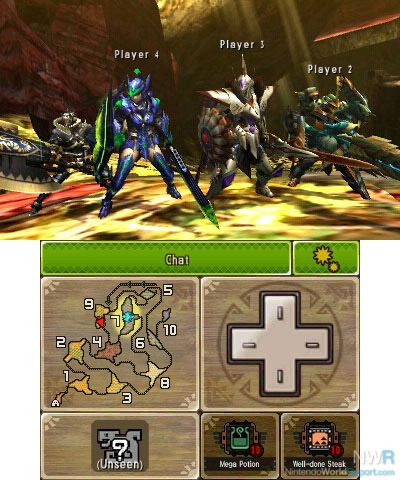 The game’s single-player adventure is the other part of this game to see enormous change. In older Monster Hunter games, the single-player experience was simply going out on quests with just enough of a story to get by. Monster Hunter 4 is far more ambitious here, as the story progresses with you conducting quests and carrying out the story from multiple locations, like an underground lava city, a village in the sky, and a desert outpost, with all of these places having unique things to do and people to meet. The story is still minor – you go from town to town trying to discover the meaning of an artifact while trying to become a hunter of worth – but it’s nice that the game is trying to create a more RPG-like single-player experience.

Another change in the game’s solo department comes in the form of vastly improved tutorial sections. From collecting and crafting to fighting monsters small and large, the game holds your hand enough to make sure you know exactly what you’re supposed to do. The downside for veteran players is that this gives the first several hours a very low level of challenge; it doesn’t pick up fully for at least 10 hours. That said, the gentle-yet-practical tutorials are so well designed that it’s even possible to take the knowledge gained from this game to experience previous games in the series after the fact.

That’s not to say the game doesn’t get tough. The fights eventually get to the point where you’re stuck in 40-minute tests of might against enormous beasts that would be a final boss in most other games. These fights are when most of my problems with the difficulty go away, and longtime fans can get the excitement they deserve. 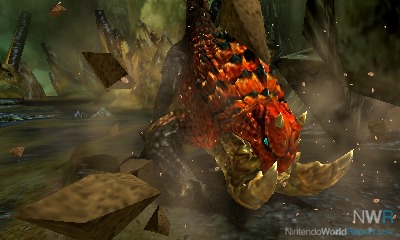 Even then, when the game gets too rough, you can summon up to two Palicoes, cat creatures that simulate multiplayer allies in the offline mode, to fight with and assist you in battle. They all level up, and have special abilities, attacks, and weapons exclusive to their type. They can also be outfitted with weapons and armor obtained by crafting materials gathered in a neat mode called Meownster Hunter. In this mode, you send Palicoes out into mini quests of their own where they fight bosses off-screen and come back with goodies. It’s generally not necessary, but it is another well-made mode on top of what is already a mountain of content.

Another cool feature comes in the form of Expeditions, which replace Free Hunts in previous games. Expeditions are quests that task you with hunting monsters in the Everwood, a forested ruin that offers a one or two monsters to hunt (sometimes more) and a new randomized map layout every time you enter. The monsters in this mode are unique in that they can run away, and need to be hunted in time in order to get the most loot possible. There is also unique, “rusted” equipment in this mode to discover that is similar to equipment you can craft normally only with randomized, often superior traits. It’s an exciting challenge to enter a quest and have no idea what the area is going to look like, and the new variables on top of that make the mode even more enticing. 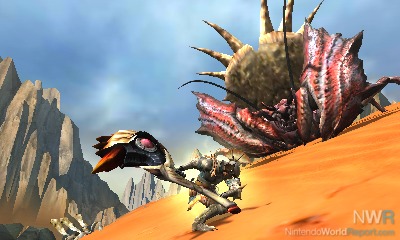 In addition to all of this, other things worth noting include the game’s new monsters and new weapons. The monsters introduced in 4 are among the best in the series, my favorite of which being a six-limbed purple wyvern, who spews disease and destruction everywhere he goes. As for weapons, there are two introduced this time around. The Charge Blade is a versatile weapon that can switch between a sword-and-shield or a large two-handed weapon at any time, and is also capable of utilizing a series of charge attacks. The Insect Glaive, meanwhile, is a staff-based weapon that can summon a flying insect to assist its user in battle by flying around and stealing energy from monsters – boosting the user’s stats. Both of these weapon types are viable, but neither of them kept me away from my tried-and-true Great Sword.

For a game that has to worry about enormous creatures, beautifully detailed monsters and quest areas, and depth-centric 3D that thoroughly shows off some crazy battle spectacles, it’s amazing that the game runs as well as it does. No matter what was on screen or how many monsters there were, I never noticed any slowdown whatsoever. Some solid new songs complement the pretty visuals as well, but none of the new tunes manage to stack up to the best returning theme in the game. 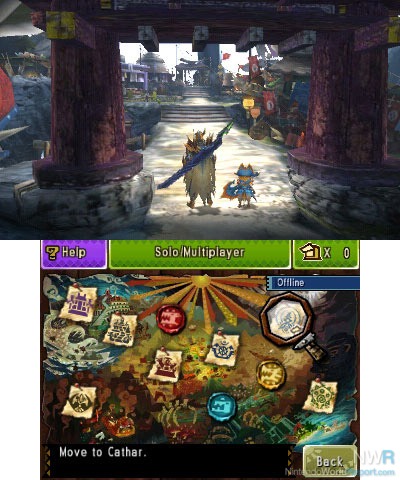 Outside of that, it’s a Monster Hunter game, with all of the wonderful and not-so-wonderful things that come with it. There are still tons of great boss fights organized into hundreds of quests online and off, the online (which works perfectly well barring a regrettable lack of in-game voice chat) is sure to be exactly as rewarding with friends as always. The fact that it’s a Monster Hunter game, however, also means that those playing solo will sooner or later hit a wall. When quests get tougher and more repetitive, it’s important to have buddies with you to break the monotony of killing the third unique form of a monster you’ve fought six times previously.

For newcomers, Monster Hunter 4 Ultimate is the ideal starting place, with more accessible combat than ever, a vastly improved single-player experience, and some endlessly gentle tutorials. For veterans, the game’s less difficult introduction may prove less enjoyable at the outset, but some extremely fresh evolutionary steps ensure that those feelings are fleeting at best. Monster Hunter 4 Ultimate is a great experience through and through – it just might take a little while to see that.

It is relieving to hear that the beginning of the game is a more gentle and better teaching experience. A different review has noted that Monster Hunter 4 Ultimate takes far less time in plopping a big monster in front you, intending for you to kill it.


Sounds like this game is a good step forward for the series.

After playing the demos of both MH3U and MH4U, I don't see the appeal of the series. They are only mildly good, boring, and gets repetitive very quickly. At least I now understand why it only has a niche following outside of Japan. Good for those who like the games, but I think they are pretty bad.

Monster Hunter is an OK single player game but where it really shines is when you can get a group together.  That's its strength.

I played the demo for MH3 quite a while ago and sucked at it.  MH4 sounded like it was more accessible so I gave its demo a go and successfully defeated a monster this time.  Still I don't really think I found it that much fun.  The combat feels like the first time I played Ocarina of Time and didn't yet understand that I should z-target so I was flailing around having difficulty lining up hits.  The concept sounds so cool in theory but just hasn't clicked with me.

Of course the review says that it requires an investment so maybe it's typical that I wouldn't be won over by a demo.

I played the demo for MH3 and didn't care for it, but I tried to the demo for MH4U and I do like it so I will be getting it when the New 3DS comes out.

I haven't seen many flattering player opinions of Monster Hunter. Tried MH Tri on Wii, found it to be a meandering waste of my time.


Why doesn't the review mention how each arena is barren and has the running area of two tennis courts before the screen unceremoniously goes black for second before telling you it's loading the next open barren piece of land. Is that jarring transition really ok to people? It's still the way MH4 works same as the old ones.


And I agree with everyone else, MH4 just isn't that interesting to play, to me.

Why doesn't the review mention how each arena is barren and has the running area of two tennis courts before the screen unceremoniously goes black for second before telling you it's loading the next open barren piece of land. Is that jarring transition really ok to people? It's still the way MH4 works same as the old ones.


Also, you're not agreeing with everyone else: the majority of the people in this forum thread have expressed positivity about MH4! 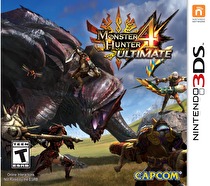