Shantae and the Pirate's Curse Review (Wii U)

Shantae and the Pirate’s Curse was one of my favorite games of 2014. It’s the game I always knew WayForward could make, and I was thrilled with the time and effort them committed to the project. Check out my review of the 3DS version for an overall breakdown of the game. For this review, I’m just going to talk about what’s different about the recently released Wii U version. Unfortunately, it lacks many of the bells and whistles that make the game so appealing in the first place.

The first thing you’ll notice is that the game’s default volume is way too loud—you’ll want to turn your TV’s volume down significantly. This problem plagued Mighty Switch Force HD as well. Unlike Mighty Switch Force HD but like its sequel, Pirate’s Curse is a straight 3DS port—the sprites and backgrounds have not been redrawn. Oddly, however, the item art on the sub-screen does look more impressive by comparison to their 3DS counterparts. 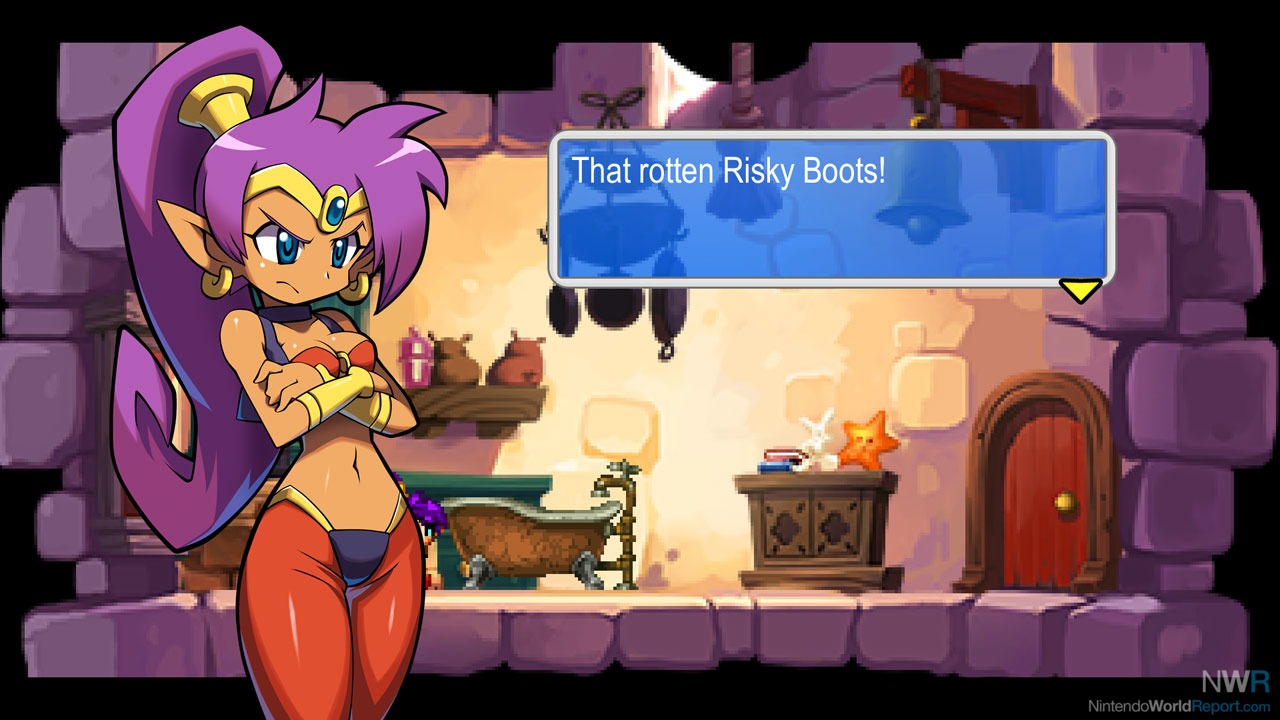 I just don’t think Pirate’s Curse blows up to a 51-inch screen all that attractively. It looks much smoother on the 3DS’ screen, though subtleties of the character animations are more obvious on the big screen. Overall, it just looks too pixelated, and the loss of the 3D effect is a bigger pain than I initially thought it would be. HD character portraits are nice, but their 3DS counterparts win out with their different “layers” (this was especially apparent on Risky Boots). The multi-layered environments, too, lose some appeal with the loss of 3D. The game just plain looked better on the 3DS—or even the 2DS, given the pixel-scaling problem.

The bottom line is that the Wii U version doesn’t make up for any lost features with its own unique features. Off-TV Play is nice, and the bounding box fits the GamePad, but at that point, you may as well just play it on the 3DS. Now, for gamers who have NO experience with the 3DS version, the Wii U version plays fine and its deficiencies won’t bother you, but it’s difficult to recommend if you already have the 3DS game—which is the definitive version by far. But if you have a choice—go with the portable version. For this review, I’m just going to talk about what’s different about the recently released Wii U version. Unfortunately, it lacks many of the bells and whistles that make the game so appealing in the first place.

*If anyone can offer a solution, that'd be great--it doesn't affect VC games.

UPDATE: I fixed the scaling issue. I just had to go into the Wii U Settings and shrink the bounding box a bit. Worked perfectly!

I am considering double dipping, but only because...

2) I don't really have a 3DS capture card, nor do I want to spring for one any time soon, and I would like to stream this/record this/etc.

Still unsure what platform to get it on.  My Wii U doesn't have nearly as much software as my 3DS, and might be nice to play on a big screen. On the other hand, the other Shantae games already live on my portable, so why not keep them together?


No rush though: I'm still playing through the second game in the series.

I played both versions at IndieCade, and this review is spot-on. The pixilation is intense. It was very clearly meant as a 3DS game, with the Wii U version produced as more of an afterthought. If the Wii U version had gotten the same treatment as Mighty Switch Force HD, it would be a lot more worth it. But here, if you already have the 3DS version, you're really just paying again to play the exact same thing blown up on a TV screen.

I have this game on WiiU but i have a distinct problem with the sound on my game.
Anytime a loud explosion plays - my speakers give off a horrible static.  This happens with both my PS3 and WiiU - hooked up via HDMI.  My sound output is also Optical Out.

If anyone has this issue, I would love to talk to you further about it.
The game is great - I just have to play it through my WiiU pad and not my TV due to the sound problem.

Yeah, I noticed the volume thing, but this is a problem with a lot of apps and games on my Samsung LED, without a receiver the TV is horrible at sound balancing and the built-in speakers pretty much suck. I should get a sound bar at least.

I did not have the bounding box issue, though, everything displayed correctly.

Also, maybe I'm weird, but I thought the game looked great. The pixelization made it feel like a rich SNES game.

The only thing I could think of with the screen size issue, is that some TVs cut off the edges of an HD signal as a default setting. Go into the TV menu and look for some sort of setting (it's called "HD Size" on my TV) and make sure it's set to full.