Mega Man is back in his second RPG adventure on the GBA. Does he smoke the baddies or get wasted by the boss? Check the review to find out.

The first Mega Man Battle Network title turned out very well. So, it was only natural that Capcom would follow up the title with a sequel. If you haven’t heard yet, Mega Man Battle Network is not the Mega Man you remember. It’s an action-RPG title. You play as Lan, your every day kid of the future, who has his PET (which is sort of like a digital companion/computer...everyone has one) Mega Man. Almost everything in the world can be “jacked into” to access its inner working via a PET. As everything is wired, many hackers exist. They release viruses into the system to muck things up. Lan and other like-minded civilians can volunteer to help fight these viruses with their PETs (of course, they need a license first).

Mega Man Battle Network 2 graphically looks solid. The overworld and the Net are both played from an isometric view, so everything is kind of in 3D. Battles take place on a 3 by 6 grid in a 2D perspective. Animation is smooth, but both the overworld and battles could use a little more detail. Mega Man doesn’t walk or run from one square on the battle grid to another, he just sort of moves there. The attacks are nice, but again I feel they could also use more detail. Although the game isn’t pushing anything really intense, overall it does have a very polished look. There really is no upgrade in graphics over the first Mega Man Battle Network.

The audio is much like the graphics: lackluster. The music is nice, the sound effects are good and varied, but there could have been more. Voice samples would have been a really nice inclusion in a title such as this. Again, not much has been improved over the first game.

There are, what I call, 3 “zones” in the Mega Man Battle Network games. First is the real overworld where you control Lan. Here you walk around and talk to people. You can get assignments, or talk to your friends. Next is the area net overworld. This area is inside devices and on the net. This is very similar to the real overworld except you play as Mega Man instead. Random battles take place here. Finally there is the battle area. This is a 3 row and 6 column grid. The 3 left hand columns are your zone and the other 3 belong to the enemies.

Battle works as such. On the net you’ll randomly encounter viruses, or you’ll find a big boss virus to fight. You can also challenge people in the real overworld to battles with their PET. When the battle starts the first thing you see is the chip menu. Every chip has a name, a letter, and an element. You can select up to 5 chips. All your selected chips must either be of the same name or letter. Some chips have wildcards for their letter and can be used with any other chips. After you select your chips you go to the battle grid. The idea is to deplete the enemy monsters’ health as fast as possible. At the top of the screen is the battle meter. When it fills up you can go back to the chip menu and select new chips to fight with. At the end of your battle you are rated on how well you fought and are rewarded as such.

Mega Man Battle Network controls very well. In the isometric overworlds it can sometimes be slightly difficult to move your way around, but this is nearly a non-issue because nothing is attacking you in these areas. I guess the controls causing you to walk more than necessary could cause you to get into more battles though. Control in the battles is perfect. Selecting chips is easy, moving and fighting is easy to pick up. Being able to access the chip menu with either L or R is a great idea also.

The gameplay, as described above, is great. The story is solid, though a little cheesy at times. The Net is very vast and easy to get lost in, especially at first. Though once you get the lay of the land it because much easier. Being able to jack-out at any point in the Net is a very nice feature. The gameplay, while not traditional of Mega Man, feels familiar at the same time. The real-time battles are excellent, especially the boss battles. They hearken back to the traditional Mega Man bosses where finding the pattern and weakness is key. Gameplay on the overworld sometimes feels a bit slow, and it can sometimes be a bit confusing to figure out what to do next. The only downside to the gameplay is that if you didn’t play the first title you will be in the dark as to the relationship between some of the characters.

With 250 different battle chips to collect, Mega Man Battle Network will take a long time to complete 100%. The main story is of good length for a handheld game. You can save any time you wish, which is extremely important in any handheld game. Sadly, there is only one save slot in the game so both you and your friend cannot play at the same time. Once you beat the game much of its lastabality will dissipate. If your friend has a copy of the game you two can battle your PETs, which also adds some replay value.

Overall Mega Man Battle Network 2 is a very good game. It has both solid graphics and sound. The controls work excellently. The gameplay is fantastic. It’s a mix of old and new for Mega Man fans. It’ll provide you some great entertainment and is an excellent road trip game due to the fact that you can pick it up and put it down pretty much anytime you want, unless you are in the middle of a battle (most of which take less than a minute).

The graphics are solid and get the job done, but there is some room for improvement.

Similar to the graphics, it’s good and fits the game very well. But it could be much, much better.

Controls are near perfect. Battle controls are quick and responsive, so they won’t be a problem at all. On the overworld it can take some adjustment to walking on an isometric plane.

The story is good and there are lots of different enemies to fight. Boss battles are lots of fun.

Mega Man Battle Network 2 will take a good amount of time to complete. And after that you can still keep playing to collect all the chips. There’s a two-player mode too.

Mega Man Battle Network 2 is tons of fun. It has a good story and even though it’s a sequel, the battle system is still fresh. If you’re looking for a good action RPG or road trip game, you should look into it. 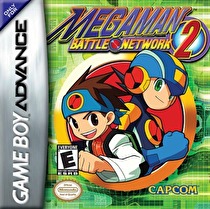