This game may not be a runaway success.

Originally released on the Wii U eShop, I've Got to Run has jumped onto the 3DS in I've Got to Run: Complete Edition. However complete it may claim to be, this 3DS endless runner does not feature enough content to make its completeness worthwhile.

In the typical endless runner style, you jump between platforms of various heights and see how far you can go. There are six characters to play as, including two other marshmallow people, and a cameo from Armillo, a character from a Wii U indie game of the same name. Roy the Marshmallow Boy is the first character available; however, none of them provide variation when it comes to actual jumping physics. 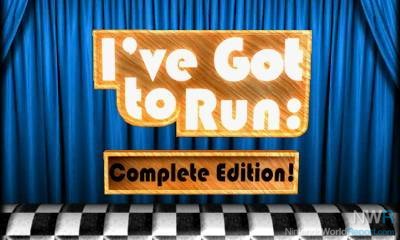 The characters and the six available gameplay modes are unlocked with minimal effort. I had all of them unlocked within an hour. That being said, this game works better when played in short bursts or else it becomes boring.

Modes are differentiated by backgrounds and names. Endless Classic and Endless Double offer left to right platforming at a moderate pace, with the latter offering players a double jump. Besides the faster pace, the kitchen setting of Classic becomes a castle in Double. Endless Special speeds up as you collect arrow icons that increase the speed. It is the best of the six modes, because it can become more of a challenge to avoid the icons that slow you down. Endless Expert is basically Double mode but faster. Flight lets you jump multiple times in a row, more than the two in Double, and it is set in the sky. Finally, Flip is a mirrored view, so the game is played right to left.

As a side-scrolling endless runner, the platforming consists of timing jumps. The design of each mode's endless map is beyond simple. Classic mode's kitchen setting has you platform off plates and other dishware. However, all the platforms are floating in the air, so the action is completely detached from the background. You can actually cover the scenery with a curtain by pressing the X button. Also, if you just want to jump automatically, you can hold the Circle Pad up. The 3D effect is actually used well on the rather bland visuals. The environments are rendered in 3D, though some of the items in the backgrounds are actually flat, which becomes apparent when using the game's slightly “to the side” view that is available in all six modes. The only background worth looking at is the space background in Endless Special. One notable problem is the lack of online leader-boards. Instead, there is a score page that you can post on Miiverse.

I'm not going to say you should run away from I've Got to Run: Complete Edition, but I wouldn't recommend running towards it either. In general, I feel that it is a below-average endless runner that can provide some entertainment in short bursts.