The Sega Genesis was never really known for very many RPGs. There were games like the Shining Force and Phantasy Star series, but the Super NES definitely had more to offer in the genre. That didn’t stop the homebrew scene from releasing Pier Solar and the Great Architects on the Genesis in 2010. Now, WaterMelon Studios, the developers behind the game, have released an HD version of the game on modern consoles. Does the game still manage to maintain its charm on the Wii U? 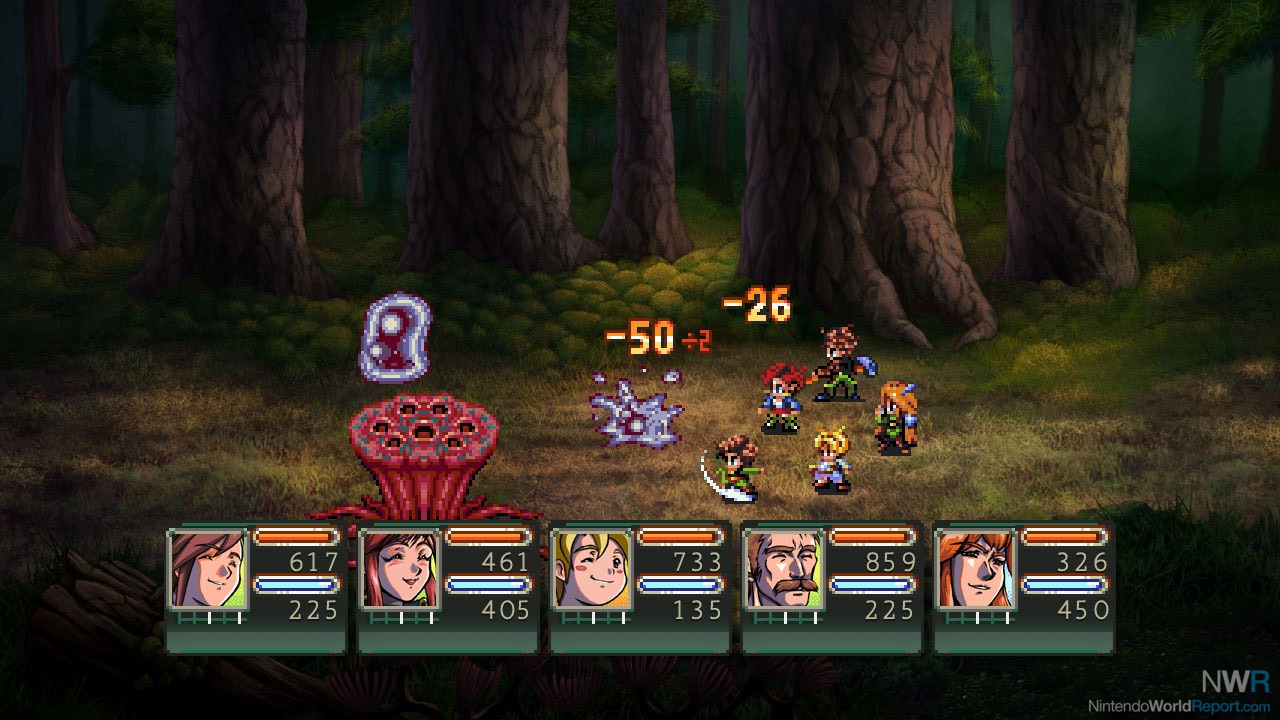 The game starts off with the main character, Hoston, going into a mysterious forest with his friends to find a cure for his father’s terminal illness, after being advised not to do so. The three friends then stumble upon an ancient temple and unintentionally unleash an ancient power, which forces them to leave the village they grew up in, in order to embark on a quest to set things right. It’s pretty much JRPG 101 in terms of plot and story, so you’re not going to find anything in this game that hasn’t been done in several games before it. Perhaps it’s an intentional choice, seeing that they’re paying tribute to JRPGs of old, but it’s hard to see past that when the game takes itself so seriously.

Usually I can forgive a generic story if I feel the gameplay has a unique twist to it, but unfortunately it doesn’t. It has your basic Attack, Spells, and Defense commands, and you’re able to equip new weapons and learn new spells. Unfortunately, nothing really sets it apart from other games in the genre. There’s a “Gather” system in place that allows you to sacrifice a turn in order to do a more powerful attack, but it rarely came in handy aside from boss battles, as it’s way more efficient to just use a normal attack twice in a row. Though the mechanics of battling are solid, you can just as easily set every party member to Auto-attack, and you’ll get through battles just as fast as you would selecting your commands from the menu. 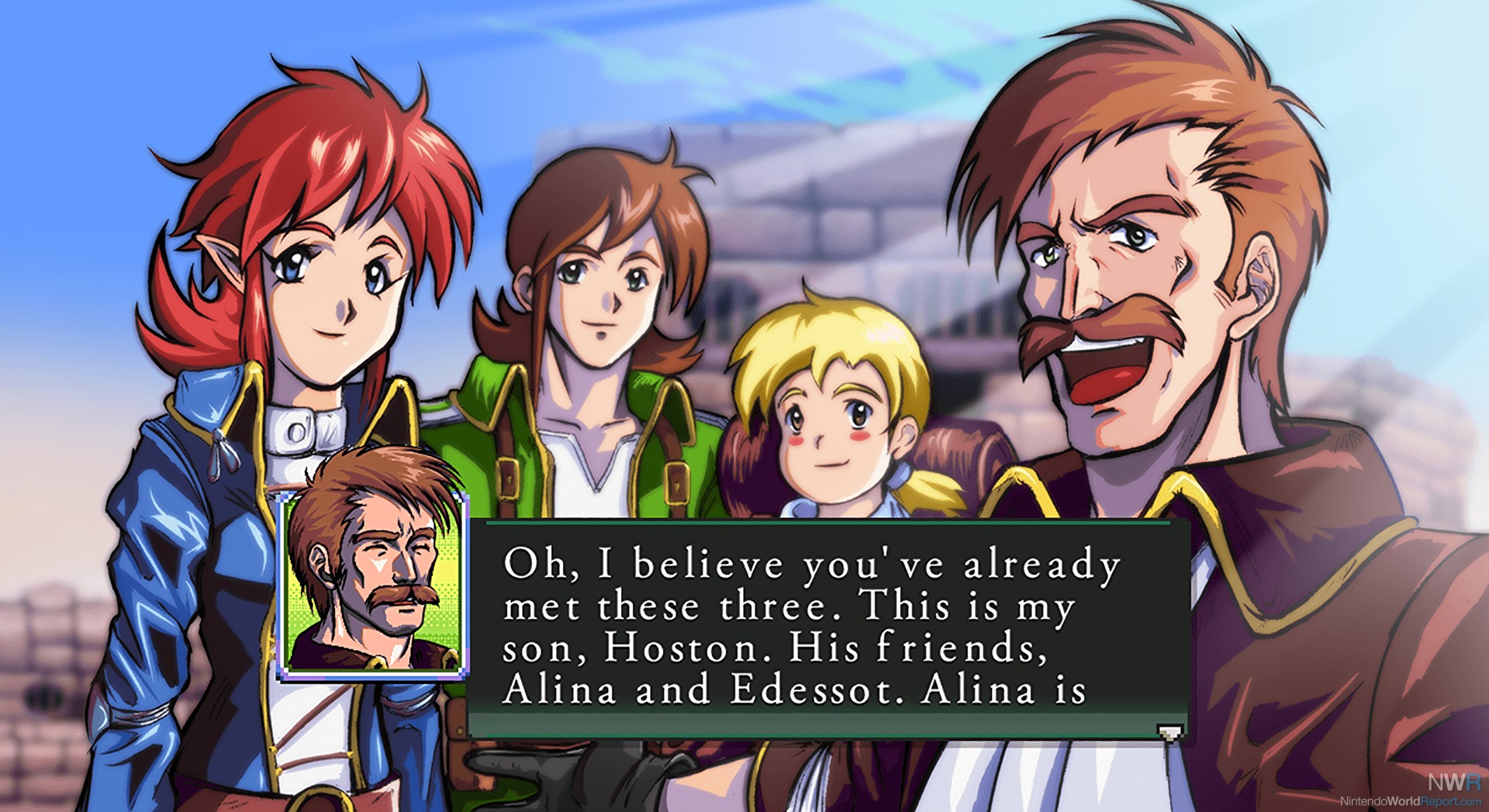 The game doesn’t really fare that well outside of battle either. Instead of a giant overworld to explore, you have to manually choose your destination on each part of the continent, making progressing in the game feel linear and restrictive. The areas that you can choose from vary from villages to campsites and monster-filled areas such as forests and dungeons. The game relies on random encounters for its battles, and with how labyrinthian some of these areas are, they get old very quickly. Even the in-game map isn’t very helpful, as it’s about as detailed as that Snake game on late-’90s cell phones. It’s hard to know where you’re going, especially when various foreground elements get in the way. There are even parts in the game I got stuck on because there was a switch or platform hidden away behind one of these foreground options, which the game expected me to just GUESS that it was there without any sort of clue.

You can switch between the original 16-bit visual style and music, or an updated HD or HD+ mode. The 16-bit mode is virtually the same as its Sega Genesis counterpart, but the HD mode offers redrawn character portraits, scenery, and clearer text but keeps the original character and monster sprites. The HD+ mode replaces those sprites with hand-drawn versions of them, but they look way worse. The character models look like transparent PNG images, but with an ugly white border around them, making the game look like something out of an old version of RPG Maker. The music however is top-notch in both modes, although I prefer the more synth-y tones of the original 16-bit compositions. 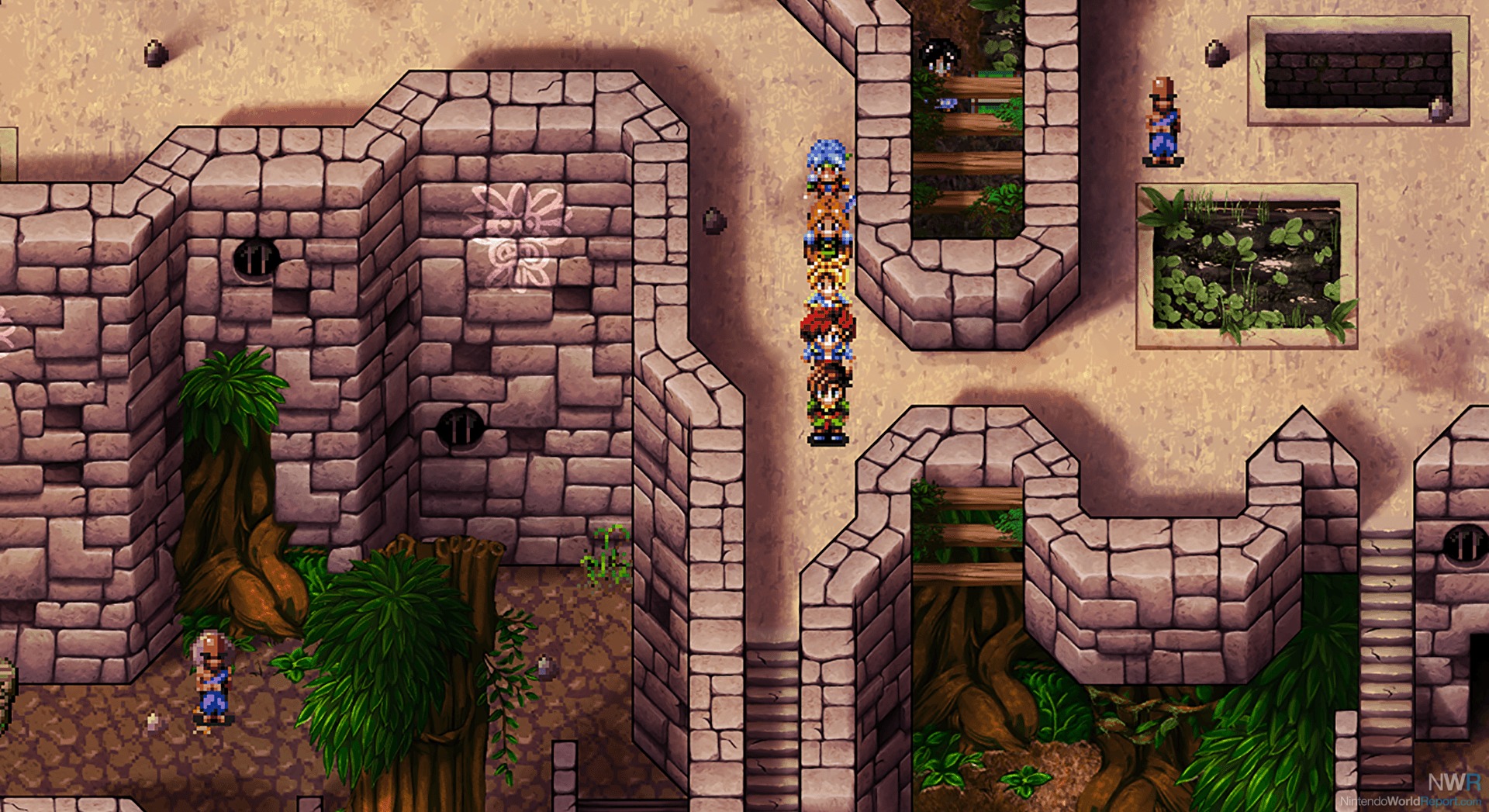 If there’s one thing that makes the Wii U version of the game stand out is its usage of the GamePad. Not only is there off-TV play, but it also gives you every bit of information you could possibly need. You can have a constant map and radar system, view character’s status and HP/MP levels, drag and drop items in your inventory, and even have your notebook viewable at all times, so you’ll constantly know where you should be heading next. It does tend to glitch out sometimes by repeating lines of text, but it’s never really game-breaking. The in-game menus can be a bit confusing to navigate, though, as it’s hard to tell just exactly what features or commands you’re switching on and off, as it doesn’t give you a clear indication or confirmation of what you’ve changed.

Overall, Pier Solar is just an average JRPG at best. Perhaps some of its novelty was lost due to it being a downloadable title rather than an actual, physical Sega Genesis cartridge. It’s really hard to recommend unless you’re absolutely starved for an RPG on the Wii U.

The GamePad stuff sounds interesting, but it's a bummer the rest of the game doesn't stand up. I really think the creators should have just focused on the 16-bit graphics and made sure the gameplay experience was top notch. The HD graphics really wouldn't have been necessary.

I'm about 10 hours in and I have to agree with just about everything Curtis said. It seems solid but not great. With that said, I'm still enjoying the play through but there isn't much about it that stands out. Hiding objects that are mandatory to further the story behind environmental objects is a big no-no.

Color me intrigued. I'm actually a fan of fundamentally sound RPGs that don't heap on piles of odd battle mechanics. More often than not they don't seem to pan out by either being a pain to use or easy to exploit.

In regards to the objects being obscured... would you call that more of an obtuse design choice, or genuinely bad?

It sounds like it sticks a little too closely to old RPGs, to the point where it ignores all steps taken since the early 90s. I'll probably still get it if I see it in a sale since RPGs are so rare these days, especially for Wii U.

I was really hoping to get this game for Wii U but it came out on PS3 much sooner and I got tired of waiting. I might still pick it up after the holidays but the way things are looking I will stick to the PS3 version. I still hope it sells well enough though to those who didn't get it on PS3. I am still waiting for AVGN adventures but at this point that is a lost cause it seems.