The other beat ‘em up starring scantily clad witches.

Who would have thought that Nintendo’s Wii U would become a safe haven for games about sexy witches? Somehow it happened and we are left to deal with the consequences. Rock Zombie, developed by Quaternion Studio, draws heavy influence from late 80’s and early 90’s beat ‘em ups. Unfortunately it misses a few key points.

Rock Zombie follows an all female, heavy metal rock trio. During a concert they suddenly realize that their entire audience is comprised of zombies. Oh, also all three of them are witches. Does it factor into the story? No, but it makes the combat more interesting so just roll with it. After escaping the concert our heroines decide they need to get to the park because… well that’s not really clear. But what do you want? It’s a zombie beat ‘em up and there is plenty of that. 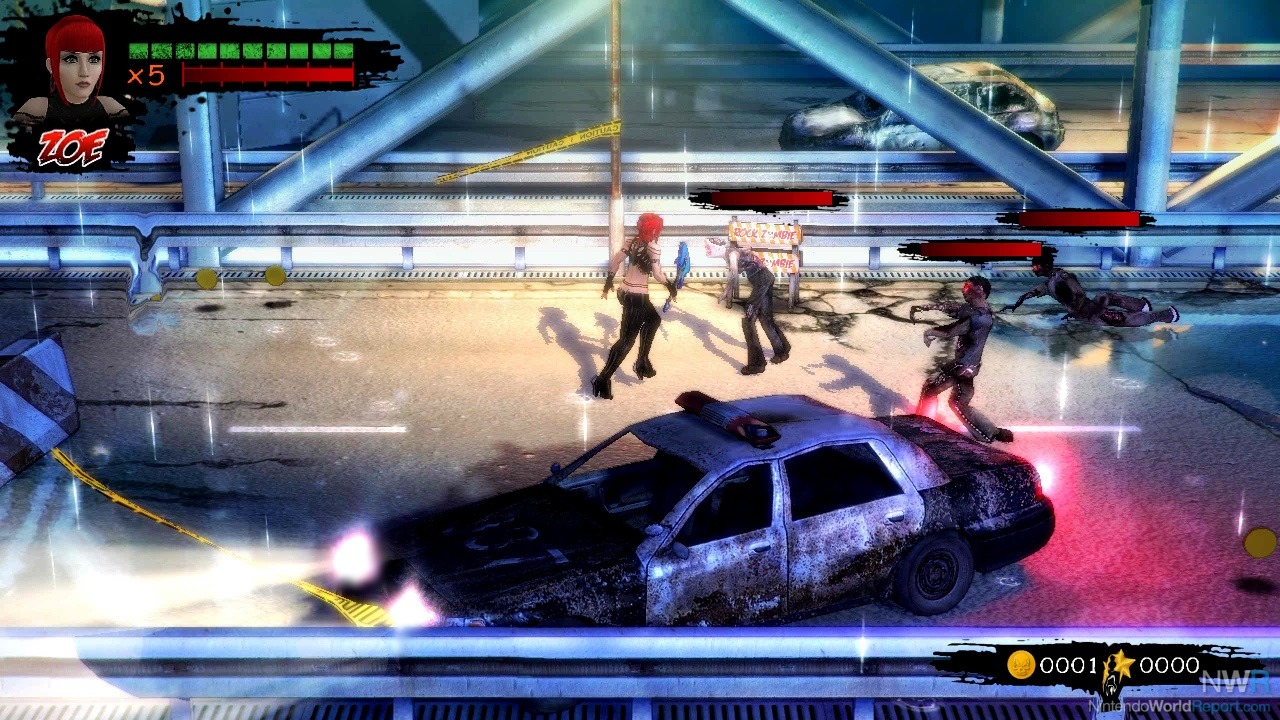 Like the arcade games of yore, action takes place along a scrolling linear path. The player character is free to move up and down a short distance while progressing horizontally through the level. Combat is separated into three sets of moves: quick horizontal swipes with a guitar, slow vertical guitar swipes, and magic attacks. Vertical and horizontal swipes can be combined together in a few short combos for extra points. Magic attacks are extremely powerful and are charged up via the melee attacks, however magic recharges so quickly that you’ll find yourself wildly overpowered throughout most of the game. While not quite balanced, combat is still generally satisfying, albeit a little lonely.

One of the hallmarks of the arcade beat ‘em up genre is cooperative play. Each character had different stats and pairing them up made those games more interesting. Rock Zombie gives you three playable characters, each with their own strengths and weaknesses but it stops there. No multiplayer for you!

On top of that the game’s boss battles are extremely glitchy. At multiple points I found myself having to kill off my own character in order to get a boss to reset. One boss in particular would work himself into a spot where he could no longer attack me, nor could he be harmed in any way.

On the bright side the game looks and sounds reasonably nice. While not exactly photo real, it does look quite good for a budget title. The 3D environments are all varied and the world around you always feels interesting. This gives you a nice incentive to move forward. Similarly the sound and music are nothing to write home about but they serve their purpose. Watching blood spill out of zombies while hard rock music blares in your ears is certainly a guilty pleasure if nothing else.

All-in-all Rock Zombie has many of the trappings of a great game. The core mechanics work, and all of Rock Zombie’s failings are the sort of things that could be fixed in future updates. For now this may not be the arcade experience you’re looking for but with a little work, it could be a welcome addition to anyone’s Wii U home screen.