Toys for Bob asserts its dominance over the toys-to-life genre with this fantastic game.

When Skylanders Trap Team was first announced, I was very wary of the new trap mechanic. The idea of capturing villains in a faceless plastic toy seemed more gimmicky than the series had been so far, missing the magic of the initial idea and subsequent iterations. Somehow, Toys for Bob made the concept of villain trapping work wonderfully, as Trap Team is, from top to bottom, a marvelous, charming adventure bolstered by fun gameplay, neat ideas, and a stellar presentation. 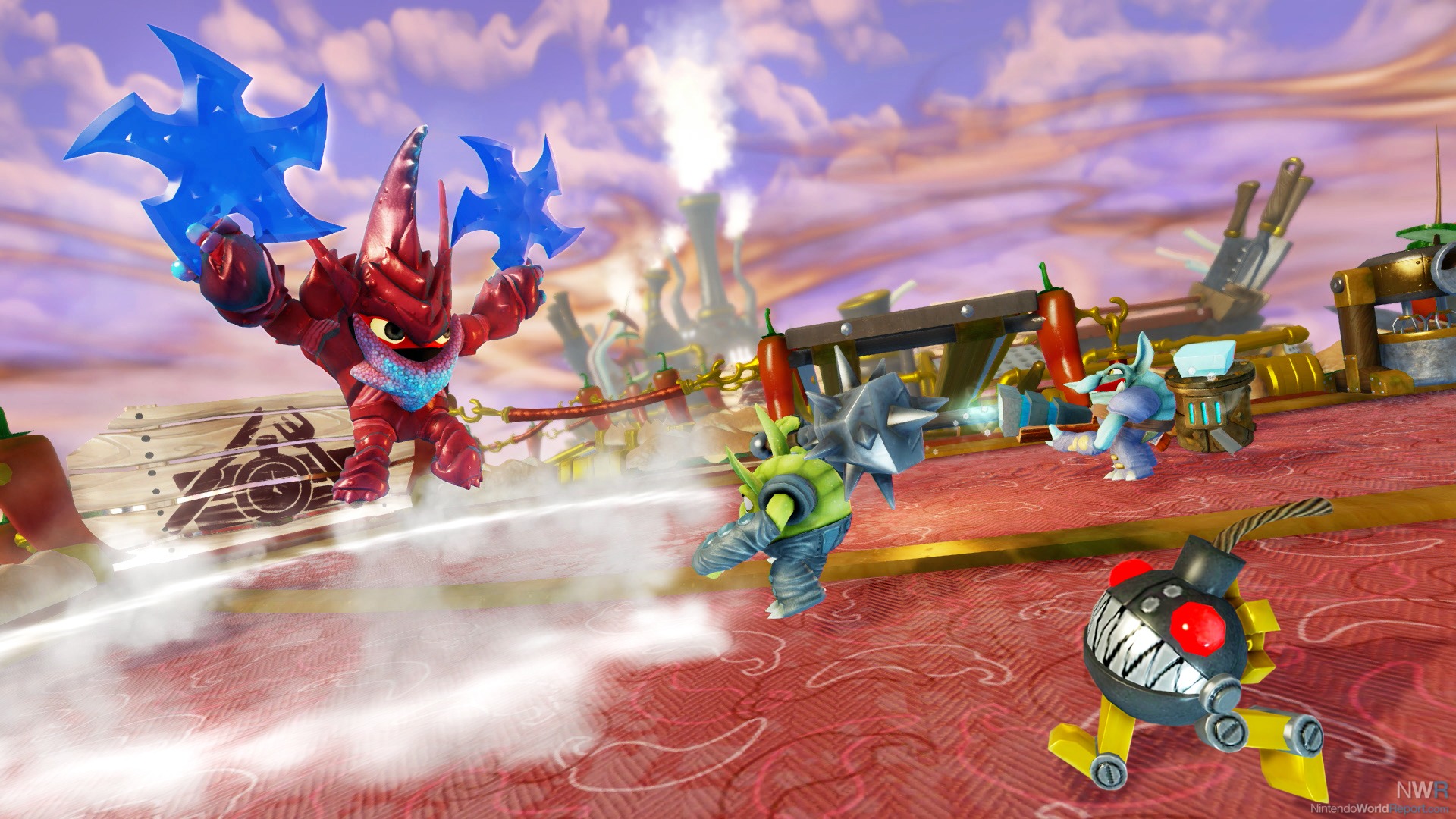 Trap Team uses the base of last year's Swap Force, as a lot of the level and environmental design seems similar (though Trap Team feels more straightforward). The moment-to-moment gameplay is a mixture of light puzzle-solving and engaging combat. The new hook revolves around trapping villains in physical trap items (two are included with the Starter Pack). This makes boss fights feel more substantial and also allows each of the boss characters—there are multiple bosses in every level--to have more of a boisterous personality. Once you defeat a boss, you trap them (as long as you have a trap of the right element), and then they get sucked out of the TV and into the trap section of the new “Traptanium” Portal. Through a built-in speaker in the portal, the villains actually talk. For some, most notably the lackadaisical mage Broccoli Guy, the dialog is hysterical, and the entire concept expertly leverages the meta aspect of Skylanders.

You can play as a villain for a limited time after you trap them. The villains are generally more powerful and each one has their own unique abilities, background music, and in-game quest that powers them up more. The idea of these trap items still feels like a malicious cash grab, but man, the villains are so charming and funny that it’s worthwhile.

The story is the main attraction, though, lasting more than 10 hours in an initial playthrough. The levels feel more focused this time around, delivering more guided experiences that dish out a little bit more spectacle and story. The strength of this mode lies in the rapid accrual of villains, as you often find an average of three villains in every level. Of course, it also helps that each level looks fantastic and sounds even better. The sound design, especially, is magnificent.

There are a few other modes to supplement the story as well, including fun arena battles and an amusing tower defense mode. Unfortunately, the entertaining two-player competitive modes from past games are completely absent. While every existing game mode can be played co-op, it’s a bummer that the cool PvP modes are all gone. The one remnant is Skystones Smash, a new twist on the series card game. It’s a fun mini-game that has even more strategic elements than the previous incarnation. 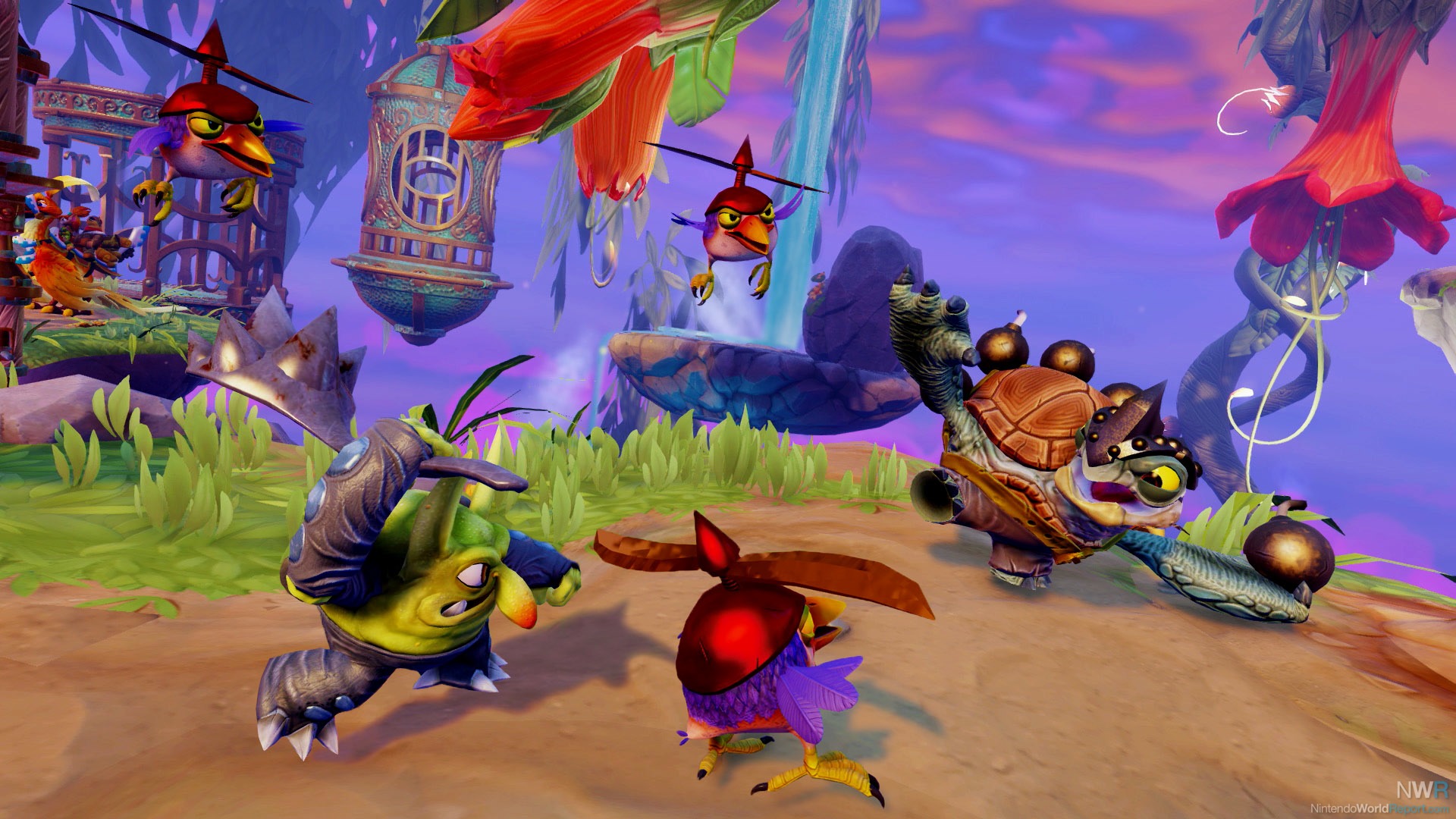 The new Skylanders figures for this version are a mixture of regular ones, Minis, and Trap Masters. Minis are new ”fun-size” versions of existing Skylanders that don't seem all that useful. The Trap Masters are overpowered gods of mass destruction and also the only way to unlock the majority of the side content in each level. In past games, you could use any Skylander of a certain element to enter elemental gates. In Trap Team, you can only use Trap Masters of that element. It really diminishes the usefulness of every other Skylander, making your old collection less useful or fun to use. Fortunately, the character designs of the Trap Masters are superb and all of the ones I've played as so far are great, especially the sword-swinging undead Krypt King and the fire-wielding golden lion Wildfire.

Skylanders Trap Team is a fantastic, well-made game. The lengthy story mode is filled with excellent gameplay set in gorgeous environments with top-shelf graphics and sound. The bonus modes, while focused mostly on combat, are a lot of fun. Outside of the over-powered and integral nature of the new Trap Master figures, Trap Team is close to being the best Skylanders game yet.

Do the previous Minis work?  In the other games there just items that tag along with you.

Do the previous Minis work?  In the other games there just items that tag along with you.

I never actually got any of those so I couldn't test it out. I'll shoot a line to our Activision rep though.