On paper, Hyrule Warriors is the dumbest idea. It’s really nothing more than Dynasty Warriors with a dollop of Zelda tropes and tweaks. However, I’m surprised to say that it works wonderfully. Hyrule Warriors is an action-packed take on Zelda loaded with fan service, fun, and a surprising amount of gameplay variation. It’s absurd and over the top in the best way, from hookshoting the moon from Majora’s Mask, to spinning the world around with Link’s ball & chain, and waving the baton from Wind Waker to destroy multitudes of enemies. That kind of nonsense is straight-up wide-grinned magic. 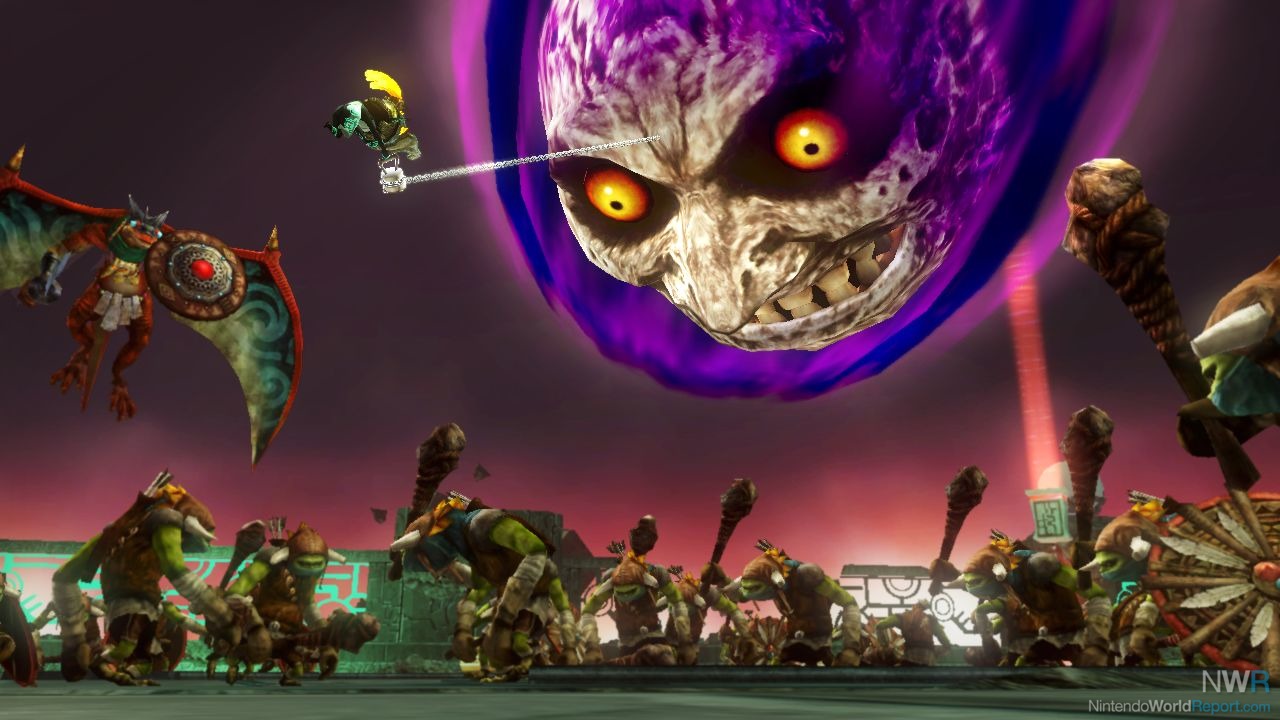 It’s that overwhelming ridiculousness that makes everything work so well. There’s a story, sure, but even as you’re fighting some well-endowed sorceress named Cia who wants to use the Triforce for her own evil doings, the story is never really the point. The point is to unlock Darunia, use a giant-ass hammer, and watch as flames erupt around you as you crush a horde of Moblins. The game’s main mode, Legend Mode, builds to different points that seem orchestrated just to put you in the most fan service-y positions possible. The opening levels have you controlling Link as he fights alongside Impa, Shiek, and Zelda, building to a dimensional split where those heroes go off and meet old friends and fight familiar enemies from Skyward Sword, Twilight Princess, and Ocarina of Time. You can defend Skyloft from Ghirahim, go and duel a possessed Darunia on a Death Mountain (that recalls Nintendo 64 rendition in a shiny HD way), and even fight Zant with Midna. And that’s not all as the story keeps on building to splendid, fan-fulfilling highs, putting you in control of a variety of awesome characters.

For the most part, Legend Mode isn’t that challenging in the way you’d expect. Mowing down enemies is just a regular action in these stages, as you alternate between pressing two buttons to execute totally sweet combos of mass destruction. The difficulty comes from managing your troops and making sure you don’t lose ground to the enemy. In each stage, you have win and lose conditions. The win conditions are usually just “beat the boss,” but the lose conditions force you to protect certain areas or friends to prevent failure. It’s never too complicated, though, and you’re constantly reminded of what’s going on in the battle by pop-up messages and dialog. 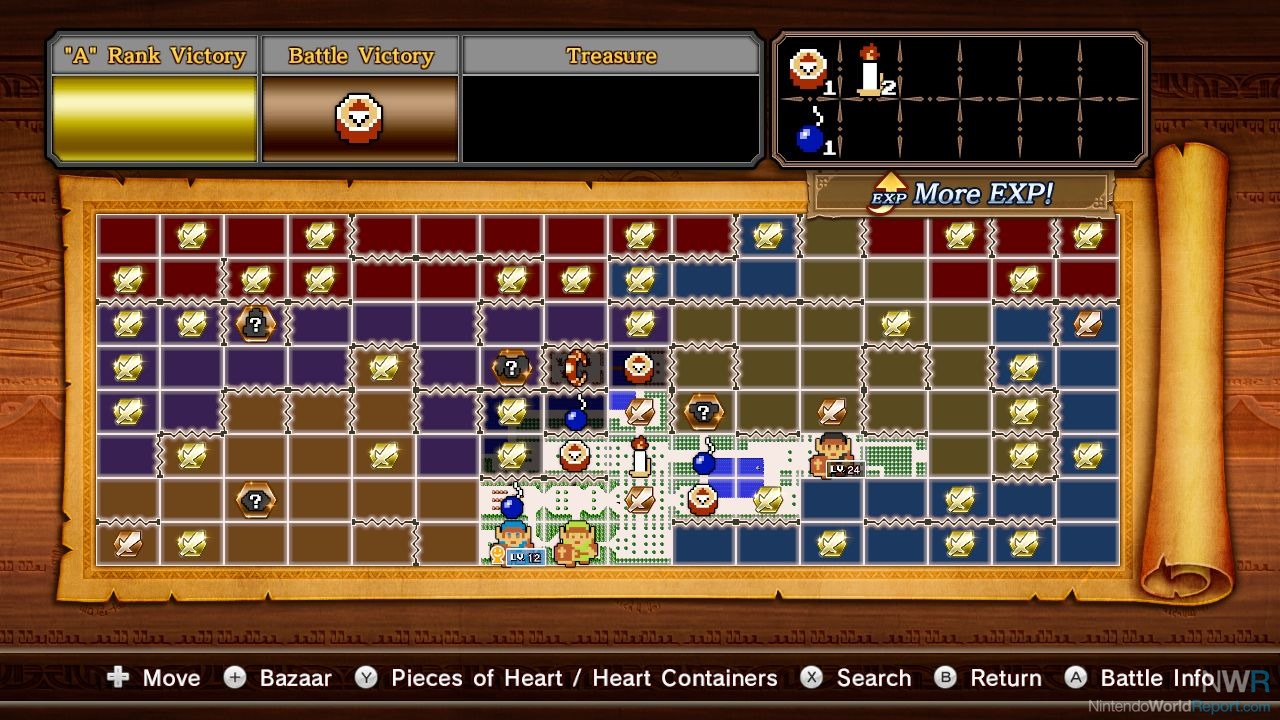 The more challenging content lies in Adventure Mode, which is an awesome 8-bit throwback mode where you move around a world map identical to the one from the original Legend of Zelda. Each square on the map represents a stage with unique win conditions, limitations, and rewards that all generally rely on your score on the stage. Most of the challenges are some riff off of “kill a bunch of enemies as quickly as possible,” but some of them get weird, such as quiz challenges where you need to attack the right enemy in a room to advance. Adventure Mode is engrossing and has a much longer tail than Legend Mode, which clocks in at less than 10 hours. If you get deep into Adventure Mode, you could easily spend more than double that time with Hyrule Warriors in total.

In addition to that, you can always spend more time in the upgrade area. While a lot of the weapon forging appears to be confusing nonsense, the loot drops and badges make for a good time. Enemies occasionally drop powerful new weapons, but they more often drop materials, which can be used to create badges for every character. It’s basically a skill tree that unlocks longer combos, stronger attacks, and a variety of offensive and defensive buffs. Working in tandem with the standard experience-based leveling system, you can build up each character in a variety of ways. The weapons are also a key part of that, though the majority of playable characters only have one weapon type, which is a little disappointing. It does make characters such as Link way more fun to play as because he has way more weapons at his disposal than anyone else. 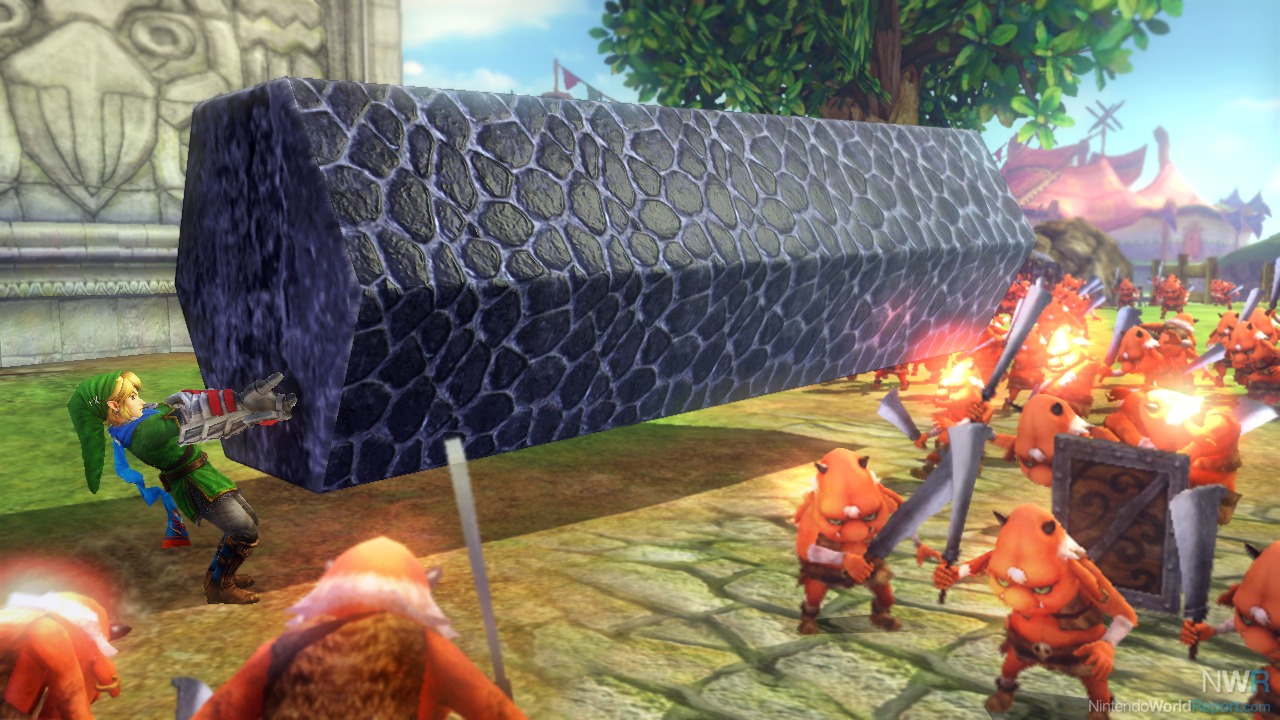 Every single mode can be played with two players, one using the GamePad and the other on the TV using a Pro Controller or Wii Remote/Nunchuk. Co-op is a whole lot of fun, especially since you can divide and conquer on separate screens. While Hyrule Warriors looks absolutely gorgeous by yourself, the graphics take a gigantic hit in co-op, looking muddled and blurry. It’s understandable, since it’s displaying the game twice, but it’s unfortunate. Luckily, the framerate holds up for the most part in co-op. I never had an issue with the reduced graphics and neither did any of my co-op partners. Sadly, there is no online co-op.

Hyrule Warriors wasn’t a game I expected to fall in love with, but thanks to its oodles of Zelda fan service and shockingly engrossing gameplay, upgrades, and modes, it turned into something very special that lives up to the Zelda legacy. It’s easy to dive into and has enough variety that it doesn’t really get old over the dozen or more hours you can spend with it. If Nintendo crossovers are always this polished and fun, I welcome many more of them.

Fixed that for you. The focus on the good 3D Zeldas (the ones without Tingle) is purely intentional.

All you had to say was Co-op is really fun and is incorporated in every mode.
Done I'm buying!!!
My wife and I will have hours and hours of great fun with this game (much of which will include me informing her why this or that is so cool as the only Zelda games she's played are A Link to the Past and Four Swords Adventures).

Glad to see you ended up having fun with the game. I know most of the podcasters were not looking forward to the game that much, but hey 8.5 is awesome. Can't wait to play the game. I agree on knocking it for no online co-op, that still stinks.

The score on Metacritic is currently at 73%. I wonder how many people are going to come and complain about this "clickbait" review that is so high above the norm? When are you guys going to pay attention to Metacritic and stick with the same review score it lists? For shame.  :rolleyes:

A 10 hours is a bit small, but we were told there would be more content made available for this game so there is hope. I will definitely by this when I can.

I've never been keen on the Warriors game because the lame AI for standard enemies seemed so out of place in a realistic setting. Somehow I don't mind that so much in a Zelda-themed version... and the loads of fan service make the game pretty appealing.


Won't be a game I run out to buy, almost certainly a game that will be in my library eventually.

The score on Metacritic is currently at 73%. I wonder how many people are going to come and complain about this "clickbait" review that is so high above the norm?

Those people are too busy trying to prop up Destiny's score.

Neal, does co-op work with a Wii remote and nunchuk or is a pro controller required? #pickingituptomorrowdontownprocontroller

The score on Metacritic is currently at 73%. I wonder how many people are going to come and complain about this "clickbait" review that is so high above the norm?

Those people are too busy trying to prop up Destiny's score.

Destiny a game where the parts are better than there sums.

Now I gotta redeem about 10$ worth of ddp

Excited for tomorrow!! This will be great.

Fixed that for you. The focus on the good 3D Zeldas (the ones without Tingle) is purely intentional.

I dunno if i'd consider Skyward Sword to be among the "good" 3d Zelda's.

Oh god, this game... It is eating my time. I played until 5am when I got it despite having work the next day.

proof Nintendo's market is 90% the problem is this game right here. I waited to get a  Wii U just for this game because what marketing I saw of Mario/DK made me shrug them off as lame more of the same. I been playing so much Mario 3d World and Dk Tropical Freeze I haven't even opened Hyrule Warriors yet. Hearing how addicting the game is when I am already losing sleep playing all three Mario games and DK:TP there is no way I could make time for this game right now.

I experience the same troubles marvel_moviefan. I've actually had a tough time being excited for Mario mainline games for years, but when I finally got my hands on 3D Land and 3D World I was absolutely blown away. Like... "10" level blown away. And I played these games months after release due to that psychological block on hype that I've developed. Sort of the same thing happened for Link Between Worlds too.