Sega tries their hand at free-to-play on 3DS with their anime-based (non) racer.

Initial D is a popular manga and anime series that has been around since 1995 with a focus on drift racing in the mountains of Japan. Since it first released, the series has seen a number of games spanning across generations of systems including Sega Saturn, Game Boy, Playstation, arcade and now the Nintendo 3DS. While the latest free-to-play release on Nintendo’s handheld, Initial D: Perfect Shift Online, is technically a racer, players do not have direct control over the car. I’ve put over ten hours into the game over the past few weeks and although I’ve enjoyed the experience overall, there are several issues that cropped up throughout my play time. 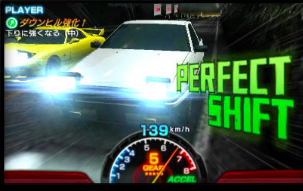 The first thing that players need to realize before delving into Initial D: Perfect Shift Online is that is not a traditional racer. The game relies on a shifting mechanic using the shoulder or touch screen buttons. Shifting too early or too late can result in slower times in the overall race and ultimately cause you to lose. It’s simple but satisfying in a laid back way to shift perfectly and hear the screech of the tires burning rubber around the corners.

After purchasing your initial car with the in game currency, RP, you are more or less ready to start racing. D Coins are another form of currency that can be either earned from races or purchased in packs on the eShop starting at 100 yen for 10 coins up to 5,000 yen for 530 of them. Users start with a little under 30 units initially so it’s possible to get your feet wet with a few races right from the start. Pride Points are similar to gasoline and can be used to access special, non-quest related races. Five Pride Points are available to each racer from the beginning of the game. 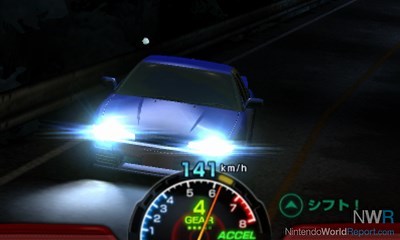 Another statistic that players will need to focus on in Perfect Shift is the FP, also known as the “fight power” of their car. Increasing your FP is necessary to progress in the single player quest missions as well as the other online related modes. The game also features a card system that is surprisingly deep as many of the cards can also be leveled up. You can also purchase decks of cards with D Coins and win more in races. It is engaging and a facet of the game that can help players get the most out of their car.

In terms of visuals, Initial D’s car models look great as they are speeding through the courses. While the environments, typically taking place on unpopulated mountain roads, are kind of bland and low resolution, it is kind of hard to notice them too much as you are going along. The fast and catchy techno/house music also perfectly matches the game. 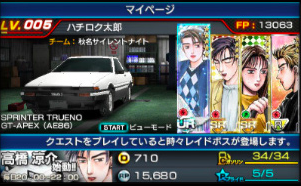 While the presentation and mechanics of the game are put together very nicely, there are some flaws and glitches that pop up from time to time. The game suffers from occasional slowdown that can have an effect on the timing of your shifts. It’s minimal, but still noticeable enough to be a problem. On top of this, the FP system limits the player from making comebacks in races. This isn’t just an issue with one mode or another. It effects the entire game making you reach the point where there is really not much more you can do to progress unless you sink an inordinate amount of time trying to upgrade your car. Being an online experience, Perfect Shift is constantly checking in and updating information with the servers at Sega. While this usually doesn’t pose a problem, there are times when you might have to wait up to 30 seconds to just proceed with to the next screen.

Initial D: Perfect Shift Online is a great looking fun, free game that can provide hours of entertainment. However, the handful of technical glitches and the occasional slowdown and the fact that it is seemingly impossible to make a comeback in races once you get behind keep the game from being something great. If you have a Japanese 3DS, it’s at least worth checking out.