Danny sinks his teeth into this 3DS anime adaptation.

Attack on Titan has taken the anime world by storm this year with its gritty tone and brutal story. Considering the popularity it is enjoying, it was a matter of time until the series burst through the wall and invaded the realm of video games. Shingeki no Kyojin: Jinrui Saigo no Tsubasa (Attack on Titan: The Last Wings of Mankind) has recently released for the Nintendo 3DS in Japan, and there is quite a bit of fun to be had with Spike Chunsoft’s take on the series. I should warn you, there may be some minor spoilers but I'll try my best to avoid them where possible. 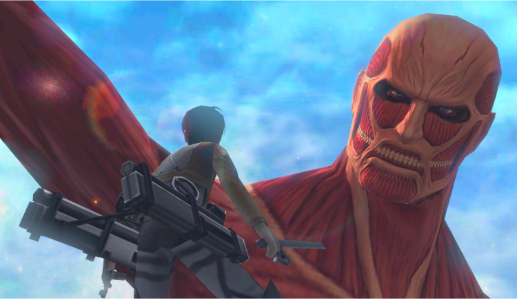 For those unfamiliar with the series, Attack on Titan takes place in a world where humanity lives in constant fear within its last remaining stronghold, a city surrounded by gigantic walls to keep them safe from Titans. These creatures, which vary in size from about twice the size of a human to the size of a small skyscraper, appeared years ago and began eating the defenseless humans, dwindling the population to the brink of extinction. The story revolves around Eren Yeager, a vengeful teenage boy who witnessed the death of his mother at the hands of the Titans, and decided with his friends Mikasa and Armin to join the Survey Corps, an elite group of soldiers who fight to protect the safety of the city from the Titan monstrosities. The game draws heavily from the anime, complete with clips, familiar characters and locations and captures the feel of the series' story and imagery well.

The game has two modes: a Story Mode and a World Mode. Story Mode follows the anime's plot and allows players to progress through the game as Eren, Mikasa or Armin. The game's missions partner you up with up to three other NPCs. Set within the single major location of the show's narrative, the missions have the potential to feel repetitive, but varying objectives help to remedy the monotony. For example, in one mission with Eren, you might be striking down Titans alongside an NPC version of Armin, but in Armin's version of the mission, you are reviving downed comrades. Story Mode will only take some four or so hours to complete, but the real appeal of the game is World Mode. 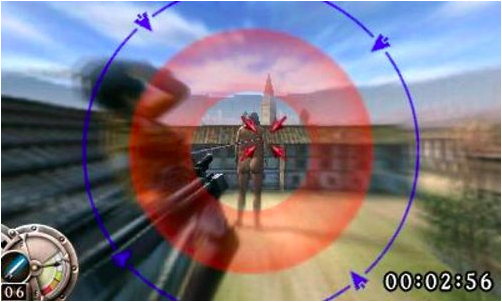 This mode allows players to create their own characters and team up with up to four local players  (or NPCs in their absence) and play through a series of multiplayer missions. In RPG fashion, this mode lets you level up your customized character, weapons, facilities and barracks. From the barracks, you can use points earned in World Mode missions to unlock comrades in your missions. Attack on Titan also makes use of StreetPass for these characters, allowing you to import characters from other systems for free. It’s a genuinely fun mode that will keep you playing the game well after your burn through the short Story Mode.

For the majority of the game, you play as one of the human cast members, controlling the use of their 3D Maneuver Gear. Fans of the show will recognize these devices as a kind of harness featuring steam-powered grappling hook launchers that allow the Survey Corps to latch onto the village's tall buildings and swing through the air. This skill is vital for battling the Titans, as their only weak point is the back of their necks. 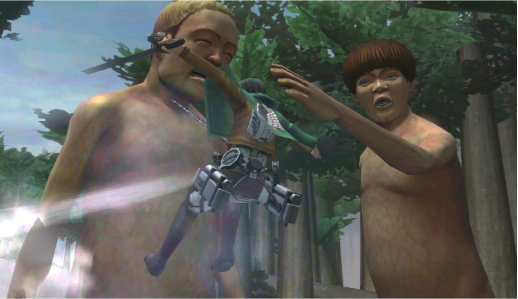 The game does a great job of portraying the Maneuver Gear and its free flowing feel. A simple press of the R button will send you gliding through cities and forests with ease. Combat is slightly complicated in theory, but can be mastered within minutes. You can lock on to enemies and center the camera behind your character with L, kind of like in Zelda. The D-Pad also features camera controls, but they can be a little clunky. When a Titan is in range, an on-screen target prompt will appear, usually on the ankle, leg or head of the creature. From there, the Y button thrusts you toward the Titan, while the Circle Pad steers and controls your trajectory as you approach. When you're close enough, X initiates an attack sequence with a quick time prompt to slash with your weapon at the precise time. Sometimes you’ll have to slice at the Titan's leg or ankle to make it stumble, allowing you to reach its head. It’s a ton of fun and can be challenging when there are numerous Titans surrounding you.

Attack on Titan also puts you in control of a Titan a few times in the Story Mode. While this sounds awesome, it's sadly one of the game's main shortcomings. The controls are fairly simple and work just fine, but the camera continually gets stuck on buildings and the pitiful AI in these stages make them far too easy. I quickly finished each of the Titan levels using simple button-mashing tactics, and it just felt cheap and unbalanced. While the camera issues are prevalent in both gameplay modes, they are definitely more prevalent in the Titan missions. 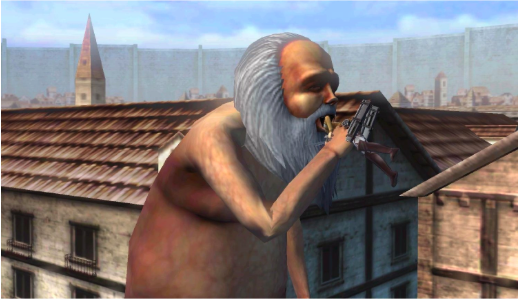 Visually, Attack on Titan retains the look and feel of the series and features quite a few cut scenes from the anime. The in-game visuals are definitely not the prettiest that you're going to find on the 3DS, but character models are accurately portrayed and the Titans are still as creepy as they are on television. There are three location types to explore in the game - city, plains, and forest. The textures look a little low-res for a 3DS game, but at least the locales look like their anime counterparts. The stereoscopic 3D effect is put to good use in the game but can be a bit hectic to look at when there’s a ton of action going on. I usually love the 3D effect but this was one of the few games that I found myself turning the feature down or completely off at these moments.

The game also supports DLC – the first of which is already available for Story Mode and there's the promise of more to come. There's also a nice Extras gallery featuring artwork, movies, and even both of the show's iconic opening sequences to be unlocked.

Attack on Titan is a surprisingly fun game, but the camera hiccups and oversimplified Titan controls do hinder the experience as a whole. With customizable characters, the lack of online play really hurts it on the long run. However, there is quite a bit to appreciate with this game's strong presentation and wonderful 3D Maneuver Gear controls. It’s not perfect, but for fans of the series or those of you looking for some steampunk Spider-Man-esque action, Attack on Titan is worth picking up.

Man, it is good to know there is a game for this show that does it some justice.  I'm assuming, though, that I'll probably never see it state side.  At least it's out there... 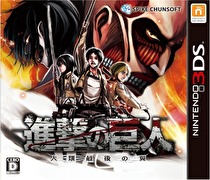