Adventure Time: Explore the Dungeon Because I DON'T KNOW!

I was, at one time, very excited for the new Adventure Time game from WayForward. It had all the trappings of a fun dungeon crawler with the added bonus of being filled with cute characters from the show. Heck, with such an easy matching of subject matter and gameplay, it's hard to fathom what could possibly go wrong! That is, until you actually play the game. It only takes a few moments to realize that something indeed has gone horribly, horribly awry here. 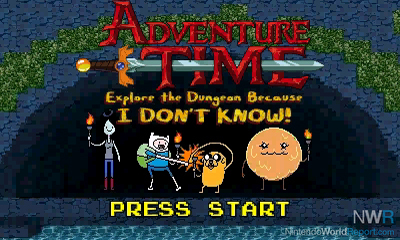 The introductory segments have all the graphical fidelity of a bad NES game, and the first thing I noticed as soon as I was dropped into the world was the atrociously low frame rate. The game feels like it's slogging through a swamp every step of the way, and the terribly-paced gameplay does little to alleviate this issue. The moment-to-moment gameplay consists of navigating barren, repetitive dungeons and fighting the same handfuls of enemies. Every few levels the enemies change, but by the time that happened I was so bored with the game that I was just running past them to find the next floor with feverish, misplaced hope that it would be more enjoyable than the previous.

That's the biggest issue: you can simply walk through most of the game (in fact, with that framerate, you have to). The majority of enemies pose a minimal threat, and if you’re playing as Marceline, then you can float right over pits and water. So the game becomes a simple gerbil maze where you occasionally have to find a key before wandering around to pick up treasure and find the staircase to the next floor. Even picking up treasure (and other items) is a pain because you have to line your avatar up exactly over the item to grab it. When such simple things like picking up items is a pain, you know you’re in for a bad time. Attacking also suffers from the same positioning issues, leading to plenty of whiffs, anger, and broken dreams. 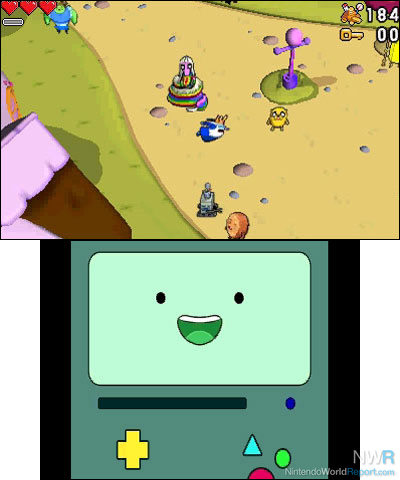 The characters also have a small list (around two to three) of things they say when picking up items such as secondary weapons and ammo. These voice snippets serve two purposes: to occasionally remind you that you’re playing an Adventure Time game and to drive the player completely and utterly insane. The only other indications that it is, in fact, and Adventure Time game are the sprites and occasional voiceover. Other than that it just feels like a phone game from the pre-smartphone era more than anything. The dungeons are sparse, the power ups are either useless or incredibly overpowered, and the entire experience suffers from a severely small amount of content stretched paper-thin over a game that is way too long for its own good.

Boss encounters come every few levels and they serve to break up the monotony with a heaping helping of frustration. They do offer different gameplay experiences, but they're designed just as poorly as the rest of the game. The second boss in particular is a huge exercise in frustration. It’s a forced scrolling section where you’re running from an angry mob, but the inaccurate controls and introduction of new elements during the battle make it unreasonably difficult. They’re also the only time you’ll probably find yourself using the dodge and block abilities in the game, since the majority of the time you’ll be running past enemies looking for treasure and the next floor. 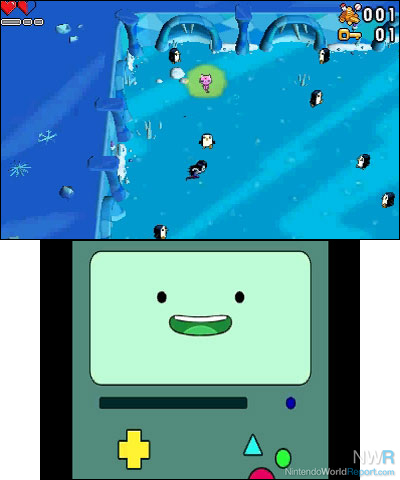 To the game's credit it does function properly and I didn’t run into any game-breaking bugs. Small children who just want to look at Adventure Time themed graphics may find something here to enjoy, but it’s unlikely they’ll be able to progress once they start hitting the rather unforgiving boss battles. In the end, I’m just not sure who the game is meant for. The dungeon crawling is just broken and the Adventure Time assets are implemented in the most annoying fashion.

I can say confidently that if you have a family member whom you want to annoy to death then get them or their children this game. I can assure you that within one week you’ll begin receiving hate mail from them. I went from being excited to play the game to dreading the moments leading up to turning it back on. Adventure Time: Explore the Dungeon Because I Don’t Know is the worst kind of licensed game.

Sad to hear.  I bought the CE of this, but haven't played it yet (I mean, Zelda... duh).  The first AT game was a TON of fun, although too easy and too short.  Sad that they seem to have dropped the ball so hard on this one. :(

I played demo of last years game and thought it was ok, I assumed this game would be better but nope it's worse .thats sad

A resounding recommendation if I ever heard one.

Only played the demo briefly, but the first game got pretty lousy reviews too.

It's a shame, given how deeply ingrained video game logic is in the show in the first place. You'd think this could be a home run license. 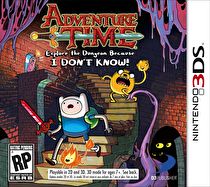