The bitter rivalry is now in 3D.

Mario Party: Island Tour is the first of the franchise to come to 3DS, following the format of the overhauled Mario Party 9. However, instead of sticking to one formula, Island Tour presents various boards with unique gameplay and radically different play times. Island Tour is very clearly designed to complement the system, especially with an expanded solo mode and new styles of mini-games. Island Tour is a fine entry in the series that should bring out the competitive streak in all Mario Party fans, old or new. 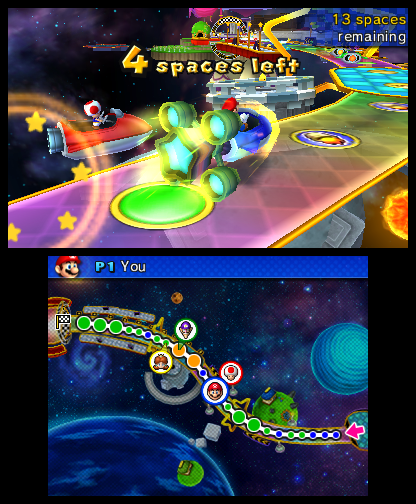 Island Tour wastes no time inviting you and your friends to the party. From the moment you first select Party Mode, you can choose between six shiny new game boards and a seventh unlockable board, each one more unique and gimmick-filled than the last. Toad is the very gracious host this time around, as every board has a helpful description that lets you know skill or luck-based it is and also how long it should take. It’s always good to make informed decisions when you go to a party, and time estimations are especially useful if you just want a quick game or are in the mood for something more traditional. Island Tour even manages to make its solo mode engaging and competitive. Solo players have unique access to options like StreetPass Mini-games, Bowser’s Tower, and Collectables.

Bowser’s Tower, the jewel of the solo experience, is a fun way to keep the game going when there is no one around to play with. Players must make their way to the top of the tower by defeating computer players of varying difficulty on each level. Every five levels, Bowser sends down a boss to challenge the player in a battle game unique to the villain, culminating with Bowser himself at the top. Conquering the tower multiple times brings new rewards, ensuring new reasons to continually pick up the game. The only downside is inability to set the computer players’ difficulty. For most floors, the computer will default to easy, which can hurt replay value once players start repeating mini-games. 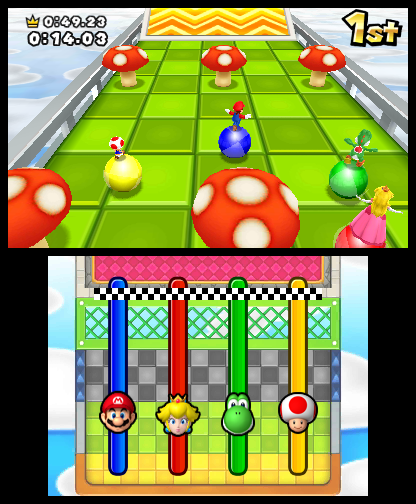 However, Download Play is where this game shines. Up to four people can play at a time, choosing between Party and Mini-game modes. The two modes share the same features as they do in their solo version, with two exceptions. The Shy Guy’s Shuffle City board, is exclusive to multiplayer mode and requires three to four real players, prohibiting any computer characters.

Island Tour departs from Mario Party 9 with a return to splitting up character movement, and only requires the collection of Mini Stars on one of its boards. Other boards feature special boosters or bonus cards to use, event spaces on the dice, or even no dice at all. It shakes things up quite nicely, ensuring there is more to each board than just a theme change. Even the usual focus on mini-games is lost on some boards, such as Rocket Road, where a mini-game only appears once every three turns.

Regardless of what board you play, inventive mini-games that take advantage of console features like the 3DS’s gyroscope keep things fresh. They are all easy to grasp, though the directions and controls are repeated a little too often (and can’t be skipped), which can get annoying pretty quickly in modes that utilize frequent mini-games. All of the mini-games can be played separately as well, in addition to several ones that can only be played outside of boards. A few puzzle games amp up the competition in Tetris/Dr. Mario-style multiplayer, while other games make use of the microphone and AR cards. The mini-games can also be played in a variety of other ways, too, including Time Attack and Hot-Air Hijinks, where players compete to reach a set number of wins. These modes are a nice way to play in a structured format beyond simply scrolling through and clicking mini-games in Free Play.

Unfortunately, Island Tour doesn’t support any type of online multiplayer use. It’s a shame, as it would’ve been a nice bonus to be able to play against live people anytime. True, it would be hard to imagine it in long game boards, as you would have to depend on people keeping the connection for up to an hour on some, but short and mini-game competitions could have thrived with this sadly absent feature. 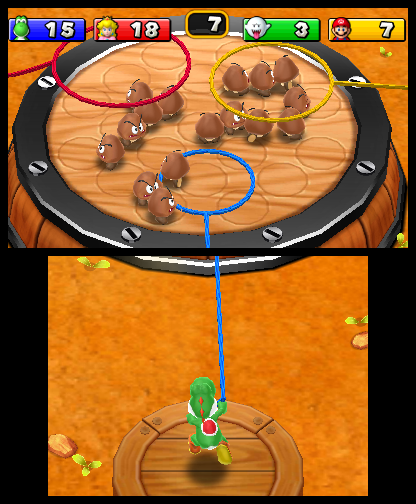 StreetPass helps ease this a little bit as you can play against shadow characters from other systems. Stars appear next to their profiles, indicating difficulty level, and players can choose whether to compete against others on a randomly chosen mini-game or pass instead. Using StreetPass also unlocks special collectables.

The collectables tie directly into Mario Party Points. These points are earned by doing pretty much anything in the game and are used to buy bubbles that contain characters and memories (board game areas). When viewed in the gallery, these bubbles contain music or voice audio files used in the game. It’s a nice touch, but it’s nothing more than a mildly interesting bonus. Unlocking most bubbles is an easy process, and earning points is so easy anyone could complete the gallery quickly if they really wanted to.

Mario Party: Island Tour is a fantastic addition for the 3DS. The graphics are crisp and utilize 3D well, while the music fits each game and board without becoming monotonous. Every mode and board is easy to pick up and play with anyone, anytime.. Island Tour is a perfect balance of old and new that keeps the game fresh with playing styles to meet every need. It’s exactly what you want out of a portable party game, complimenting the 3DS effortlessly, and bringing a perfectly suited party game to the console that is long overdue.

It basically has zero value for me as a game if there is no online multiplayer. 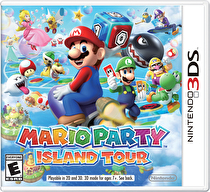