Marvel at the game's mediocrity.

Lego Marvel Super Heroes is the third Lego-themed game to arrive on Wii U this year. As someone who thoroughly enjoyed Lego City Undercover, I was looking forward to getting my hands on yet another fun, Lego adventure. Unfortunately, the more I played this entry, the more I realize that more of the same isn’t always a good thing.

Lego Marvel Super Heroes’ story is a simple one: Dr. Doom is trying to collect several “Cosmic Bricks” to build a giant “Doom Ray”, and teams up with several different Marvel supervillains to help him. You play as various Marvel superheroes such as Hulk, Spiderman, Iron Man, Wolverine and more, and use your various abilities to work together to get through each stage and defeat each boss. There’s some decent writing here, which is a staple of the Lego video game franchise, but overall feels too “wacky” for my tastes. Nothing ever feels all that clever or original, and just goes for the cheap visual gag whenever it can. 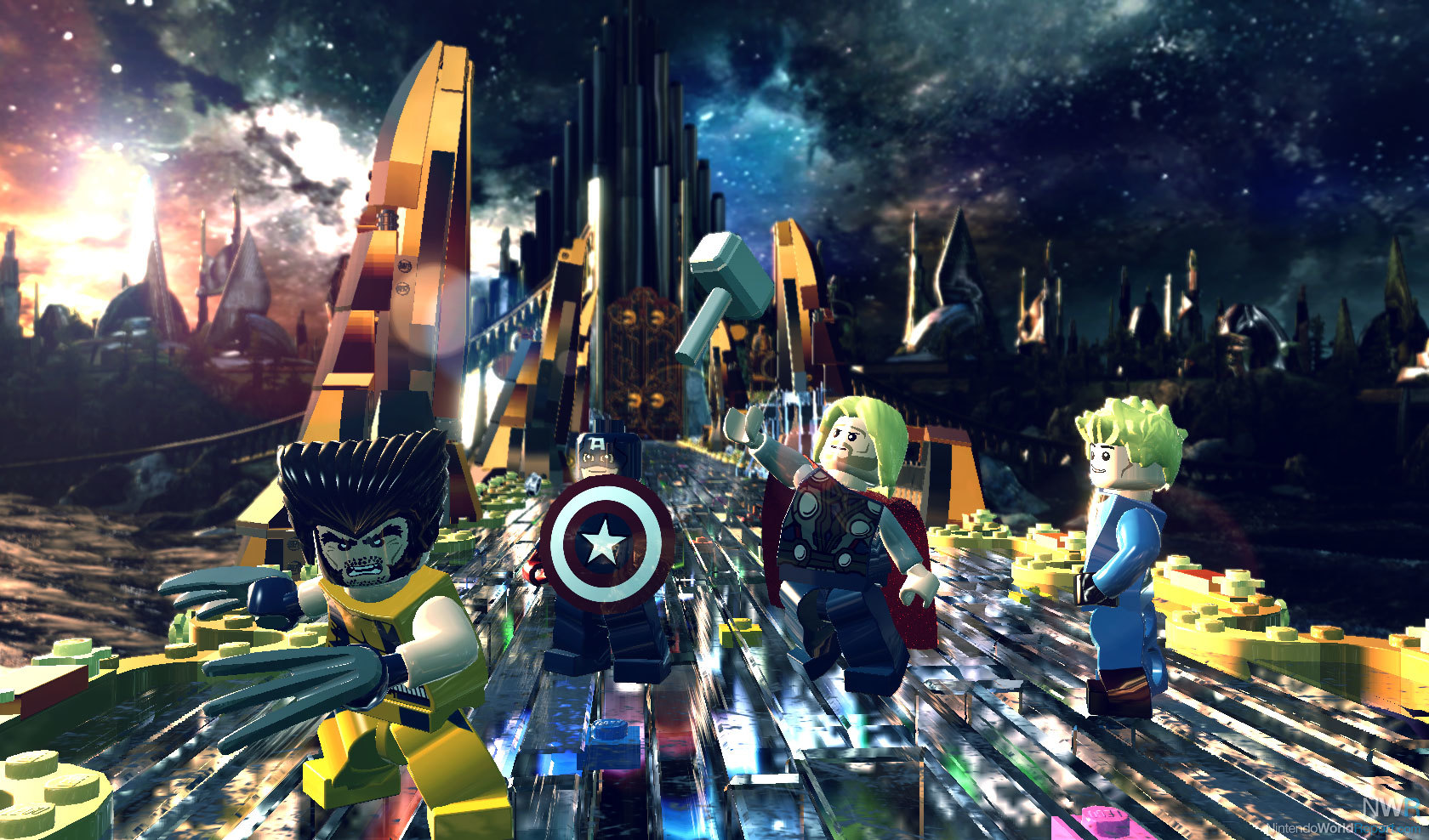 Aside from the addition of an open world modeled after New York City that you get to explore every now and again, the gameplay feels and plays no different from any other Lego game. Each character has their own special ability, for example Spiderman can use his webs to swing from the ceiling, Hulk can pick up and throw big objects, Iron Man can fly around, etc. Aside from these abilities, the characters control exactly the same. They all punch and kick, and have a projectile attack. Though the attacks don’t really matter all that much, as there is no consequence for dying. When you die, you simply respawn in the same area. No lives, no loss of the various Studs (the game’s currency) you collect through the level, you just simply keep going.

The lack of consequence makes the game feel less rewarding when you finish a puzzle or beat a stage, especially when the game is constantly flashing a hint on the screen, and telling you precisely which character needs to be used in a specific puzzle. These puzzles are about as simple as they get: destroy an object, build new object, and use new object. Some puzzles have you use a character’s special ability to find ways to progress through the level, but when the game isn’t beating you over the head with what to do next, it’s leaving you completely in the dark. I’ve spent several minutes stuck in certain rooms because I didn’t destroy a certain object with a specific character. Both the lack of contextual clues and the overabundance of them make for an uneven and frustrating experience. 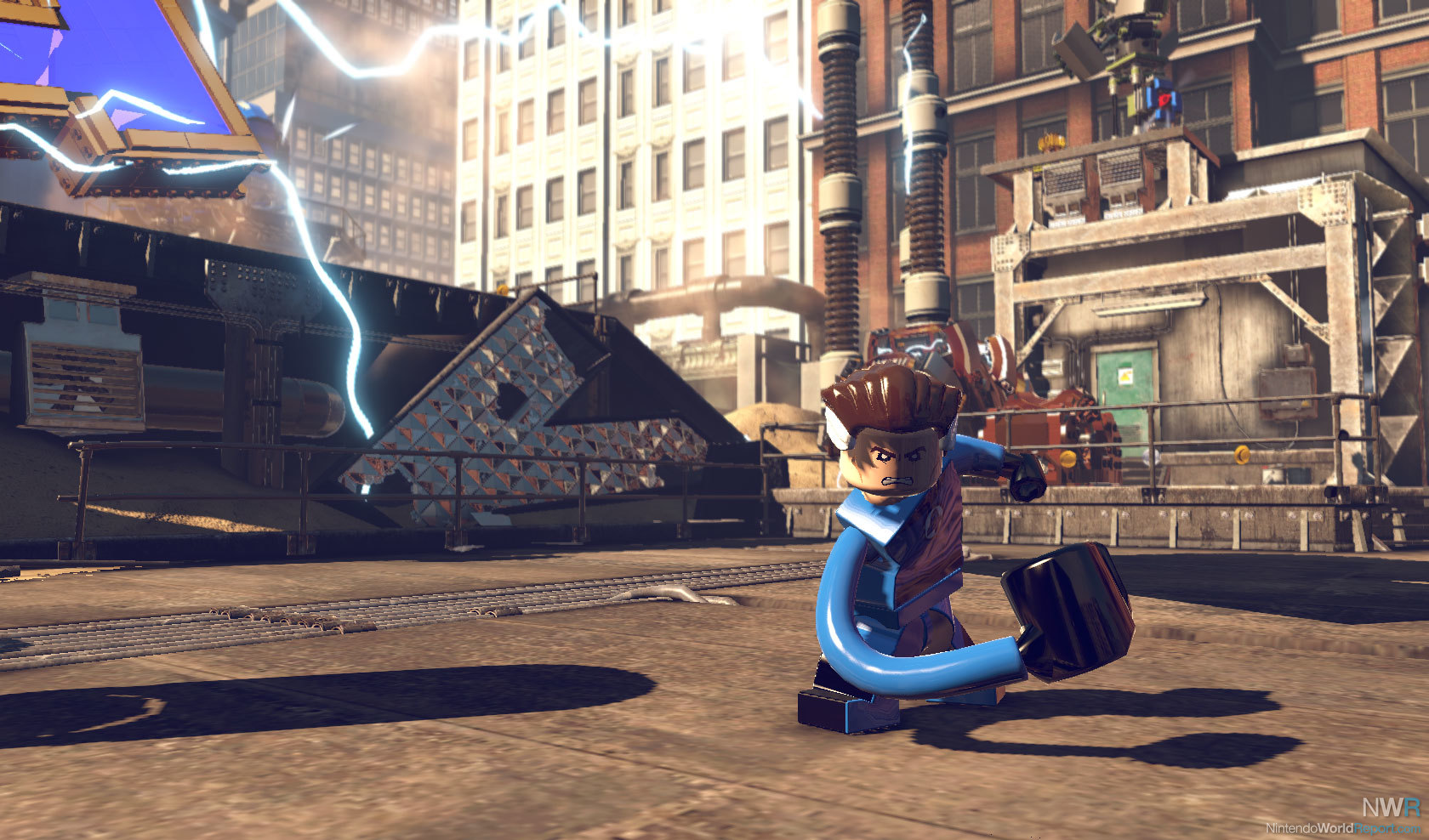 Even though I sound down on the game, it’s hard to deny how much work and detail went into it. The graphics and art style are visually stunning at times, and make me forget that I’m playing a game based on little plastic toys. It’s clear that the developers really wanted to capture and recreate those grandiose moments that the various Marvel franchises represented are known for. This especially becomes apparent with the sound design as well. The voice acting fits all the characters perfectly, and the epic musical scores help create a sense of urgency. It’s hard not to get excited when the presentation is so far beyond what you would expect from a Lego game.

Even with the excellent presentation, I still couldn’t make myself care that much for the game. There’s lots of characters to unlock, but most of them only differ in a cosmetic standpoint. The Wii U-specific functionality is minimal, as the touch screen is only used to select one of the currently playable characters or to switch to Off-TV Play. After playing Lego City Undercover, I half-expected to see the game make more use out of the GamePad’s unique features, but I feel like even that wouldn’t really help an already dull game. If you have kids and they love any of the Marvel superheroes, I could definitely recommend this game to them. Otherwise, you can le’go of any hope that this game could be enjoyable.

... I take it the reviewer isn't a Marvel Fan? haha I mean half the fun for me was seeing how many different Marvel heroes there were. Yeah a bunch of them have similar attacks and things. But then they mix it up who has what with different characters. I think it's a lot better then Lego City in the sense that when I need to change a costume in lego city I just find myself thinking ugh okay, lets get through this... But when I change superheroes to do something, it feels really good! I think because not only am I actually changing a character but also they all have unique identities who I know and love and it's great!
As far as the gameplay goes though. I think it's a standard lego game. Like Most lego games feel pretty similar. But with superpowers and things, I feel like it mixes it up MORE then normal. But yeah, I do agree, the logo formula is a bit stale for me too.

As far as the Wii U Gamepad support. I do agree, not NEARLY as much fun as Lego City. BUT you gotta play this with a friend! One of the things I want most of Wii U games is asynchronous multiplayer, and this game does it WONDERFULLY. When you're in the HUGE city, you and a friend can be on two different sides  of the map doing your own things and then when you get bored, go help each other! I think that is a great feeling that I don't get a lot in too many games. Or if I do, it's a split screen and It's just not the same as my friend crying out in terror, needing my help and having to describe the place he is in and having me find it on my own rather then just glancing at his screen. Ya know? I feel like a lot of simple but great things are happening with games that do multiplayer like this.


I'm not saying this is like GAME OF THE YEAR or anything... but for what it is, I think it should have a little bit better of a score. That's all, it was still an enjoyable read!

A HUGE part of the problem with this review is that it doesn't take into account how good the different marvel superheroes are.  It's simplified, but this is the game the Marvel Ultimate Alliance games should have been.  It feels like playing a little Iron Man, or Spider-Man or Hulk and you actually feel like you have these powers.  It could still be better, but I don't believe a 5.5 is accurate.

Yeah, I didn't love this game either. The voice acting was mostly crap, the open world wasn't at all enticing, and I got tired of all the references to the Marvel Studios movies. ("Get me some shawarma, Coulson!") Also, I just haven't felt particularly warm towards Marvel Comics lately. They seem to have spent the past several years in a concerted effort to make their characters as dickish and unlikable as possible.

Jokes are a bit juvenile? This is a lego game, its main audience is kids.

I HIGHLY disagree with this review. Almost every other mainstream video game website/magazine has given this game very high praise, and after spending some time with Lego Marvel Super Heroes I agree. Granted the Wii U specific features regarding the gamepad are not nearly as polished as Lego City Undercover. However, that aside, this may be my favorite licensed Lego game ever (even after being impressed with last year's Lego Batman 2: DC Super Heroes). Metacritic currently has Lego Marvel Super Heroes at 80, with the game receiving very high praise from:
Game Informer: 9.0
IGN: 9.0
Game Trailers: 8.7
EGM: 9.0
among others.


I'm by no means saying this is GOTY material by any stretch, but a 5.5 is an ridiculously absurd score. Unless you're someone who is just totally over Lego games in general, this is an absolute must buy for fans of Lego games and/or Marvel comics.

Time to destroy the Reviewer!

I'm currently playing this game on the PS3, and I'm aware that the Wii U, PS3 and Xbox 360 versions run similarly. That's why I'm absolutely surprised that the mention of bugs and glitches were not addressed and just glossed over.


There's multiple freezes that can happen, I've had characters fall through the ground, making it impossible to continue given levels, among other things.


Furthermore, the flight controls are absolute ass. This makes those flight races a total nightmare.


Going from LEGO City Undercover way back last March and now playing this game, the drops in quality and polish are immense. You can tell which game Nintendo supervised and which one it didn't just by playing the games.

Sorry, but Lego MSH is NOT a 5.5 game!  :@  Look, I know reviews are based on opinions, thats fine, but a 5.5 game is a game that sucks ass. Lego MSH is not one of those games. It appears the reviewer was let down based on Lego's Undercover game and how much he enjoyed that game. I could even understand if he mentioned the game's technical shortcomings and docked points due to those problems.  :confused;

Basically, this is a great game, esp. if you are a Marvel fan. :-* The game is at least an 8.0. Check out other reviews, go to Metacritc, ect. I just wished that today's reviewers rated the game for what it actually IS, not on just what the reviewer wanted the game to deliver. Sure, I have zero problems with a reviewer stating his opinions, but at the same time, review and score the game fairly, esp. in the case of this game. This review is waaay off base compared to every other review I've read for Lego MSH. ;)

I don't know if I can agree with the issues CurtDogg found problems with, but gamewizard65, I can say that the abysmal flight controls, the abundance of glitches and even moments where the game freezes, and other small things that overall add up to a less than fantastic experience than what you seem to think it is.

This all subjective anyway, so if you didn't come across those problems or you didn't find them as aggravating as I, that's cool.

I just know when I got the platinum for this game on the PS3 version, I encountered a lot of annoyances that added up overtime.

The 'Dogg is gonna have his day!