No dashboard camera ever could capture images of this skiing hedgehog 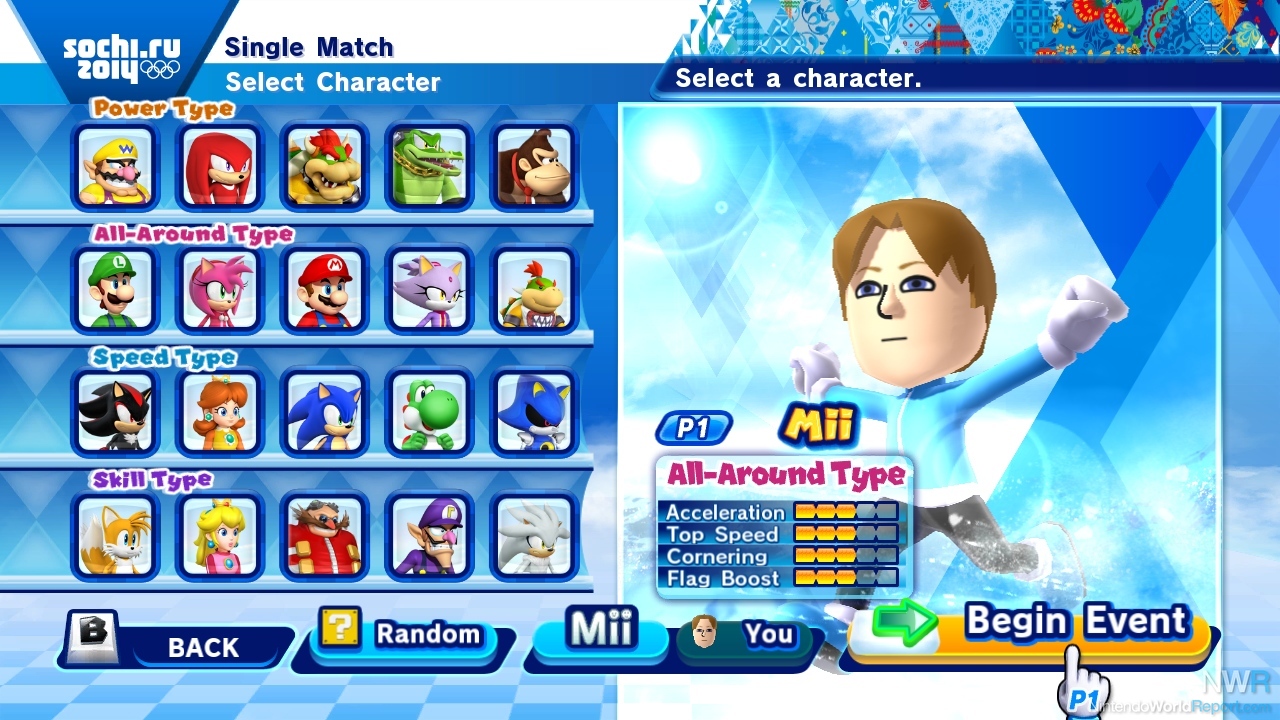 Mario and Sonic’s fourth team effort is another sports mini-game collection, albeit an enjoyable one. When it comes to these kinds of titles the quality of the package as a whole is determined by how many of the games are good. Thankfully, in this case, there really is not one that sticks out as being “bad.” While none of the sports are perfect, the motion controls paired with the slick visuals make for an entertaining time.

Like previous entries in the Mario & Sonic series, events are split up into two categories: Olympic Events and Dream Events.  The Olympic Events feature eight real life sports including skiing, snowboarding, figure skating, and others that accumulate into a cavalcade of sometimes-stale events.

Almost every event uses motion controls. Some use the GamePad, others use a Wii Remote Plus, and a few have you switching between both.  The best uses of the GamePad were the ones that take advantage of buttons. This provided a good alternative for the parts of games where motion controls just didn’t work.  Take for example, 4-Man Bobsleigh. This event uses both ZL and ZR trigger buttons, along with movements of the GamePad. Instead of making the starting run a motion controlled mess, you alternate tapping ZL and ZR, then board the bobsled by flicking the GamePad up, as if jumping onto the sleigh. You control your character, the team leader, by turning the GamePad while directing your teammates’ movements by holding either ZL or ZR.

Other games are controlled using solely the Wii Remote Plus, and are mostly effective in their implementation. One problem I did encounter were any events where your character could lean forward. Since some of these events only used the Wii Remote, it requires you to be holding it at an angle to lean, similar to when you point the Wii Remote at the sensor bar, and it felt uncomfortable to move the remote while having it at that angle. 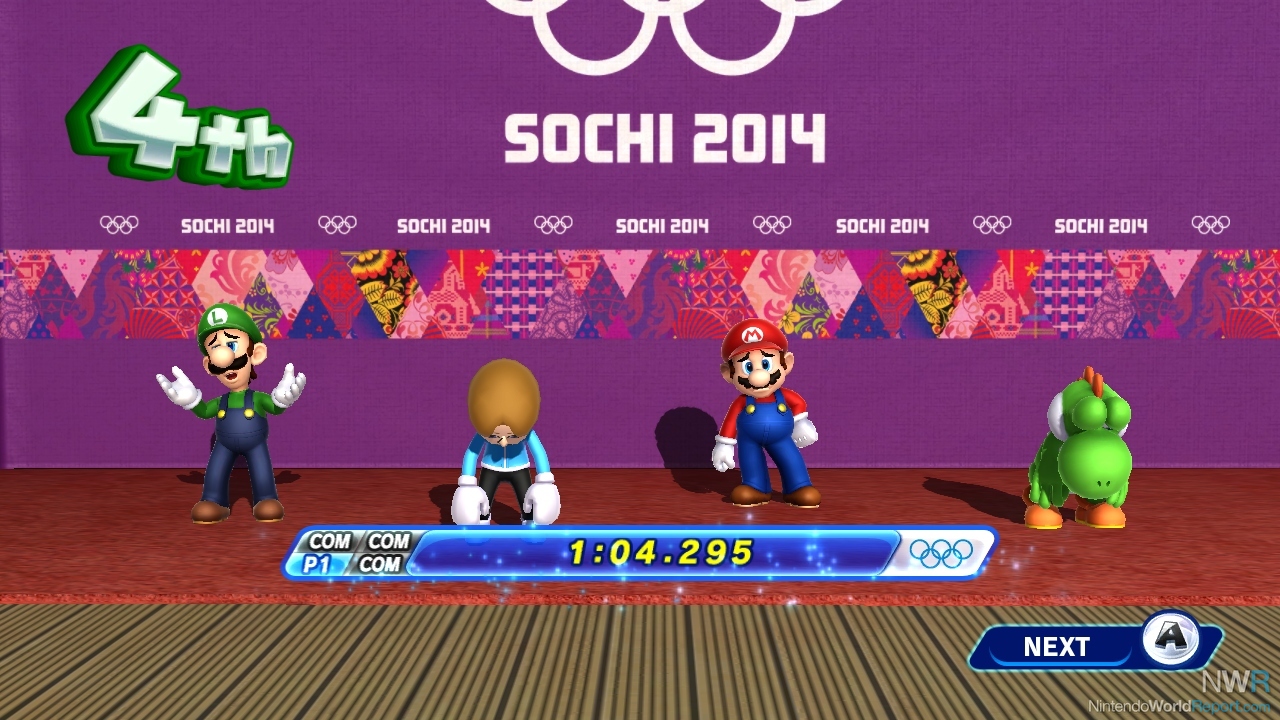 The three standout Olympic events had to be Ski Jump Large Hill, Freestyle Ski Cross, and 4-Man Bobsleigh. Each of them did a good job of creating a sense of speed, while effectively using motion controls. The two worst were Curling and Figure Skating. Curling, a sport many (myself included) don’t understand, was made more nonsensical by having the stone toss part controlled by the strength of the flick of a remote, which was rather inaccurate, and sweeping required pointless waggling. Figure skating was also a not a great time due to constantly changing controls, all of which required awkward movement of the remote. The only redeeming part of Figure skating was the choice of music, including renditions of music from Super Mario Land, among other games.

While you would think that the Dream Events would be the more fun of the two types of events, considering more freedom developers could have and not being tied down by the laws of reality, they were mostly so-so. They ranged from being a sport with a Mario or Sonic theme thrown over it to just plain stupid events like moving a giant ball into a hole. The only one that I found worthwhile was Roller Coaster Bobsleigh, an insane take on the sport where you slide down skyscrapers in a sleigh.

A problem that pervaded all the events was the lengthy tutorials. While it is definitely useful to be shown how to play some of these games, it became frustrating when others wanted to play and would have trouble following along with the tutorial, or if they just wanted to play without taking a college level course. The controls are too complicated for a newcomer, unlike Wii Sports, there is not that natural understanding of how to play each event, like swinging the remote to swing the bat. Instead controls require multiple elements that don’t always make the game any more of an elegant experience. 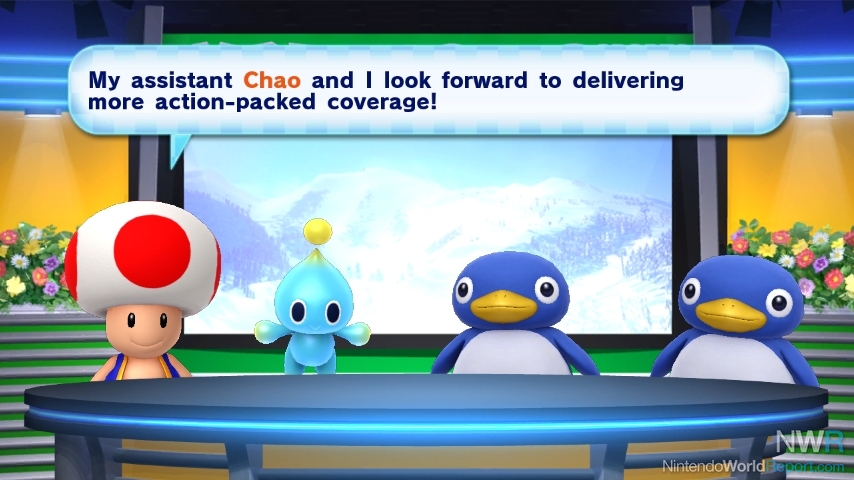 All the events could be played throughout the games different modes. Medley Mania allows you to string together events to play, or pick from existing playlists. Single Match and Worldwide Vs are about what you would expect. Legends Showdown is a mode were you make your way through different stages, face off against non-playable characters such as Birdo, and unlock costumes and equipment used to adjust your Mii’s abilities. Unfortunately, it isn’t as fun as it sounds because it forces you to play through events that you may not like. The final mode is the Action & Answer Tour. This was a nonsensical competition of rounds where players are asked a question, like who is the best skier, which is then answered by whoever skis the best.

While I wasn’t able to utilize many of the online features to their full capabilites, since the game hasn’t launched yet, I did get to try them out a little. There wasn’t much to do using Miiverse besides giving tips on sports, which is something that you could already do on a regular Miiverse page. There is also online rankings and play. Every time you get a new best score on an event, a message appears asking whether you would like to upload it, which became tiresome. Why it isn’t just done automatically in the background is beyond me.  One cool use of online features was facing off against CPU Mii characters on your friends list, and I was able to play against some folks from the NWR staff, despite them not owning the game.

Mario & Sonic at the Sochi 2014 Olympic Winter Games is exactly what it says it is: an Olympics game with Mario and Sonic. While it is fun, it doesn’t necessarily do anything past entries didn’t do. That’s not necessarily a bad thing though, because overall it is a solid formula, despite some of its flaws.

I forgot to mention that but I agree, it makes the game feel smaller than it should be.