Time to set sail on one grand pirate adventure!

Pirates are not the most compelling entertainment topic in today’s age where zombies and superheroes reign supreme. Assassin’s Creed IV Black Flag, however, embraces this often ignored subject material with great success. Ubisoft took their well known franchise and merged it with all the action one would expect on the high seas. The final product results in a formula that equally pulls from classic Assassin’s Creed as well as new gameplay mechanics. 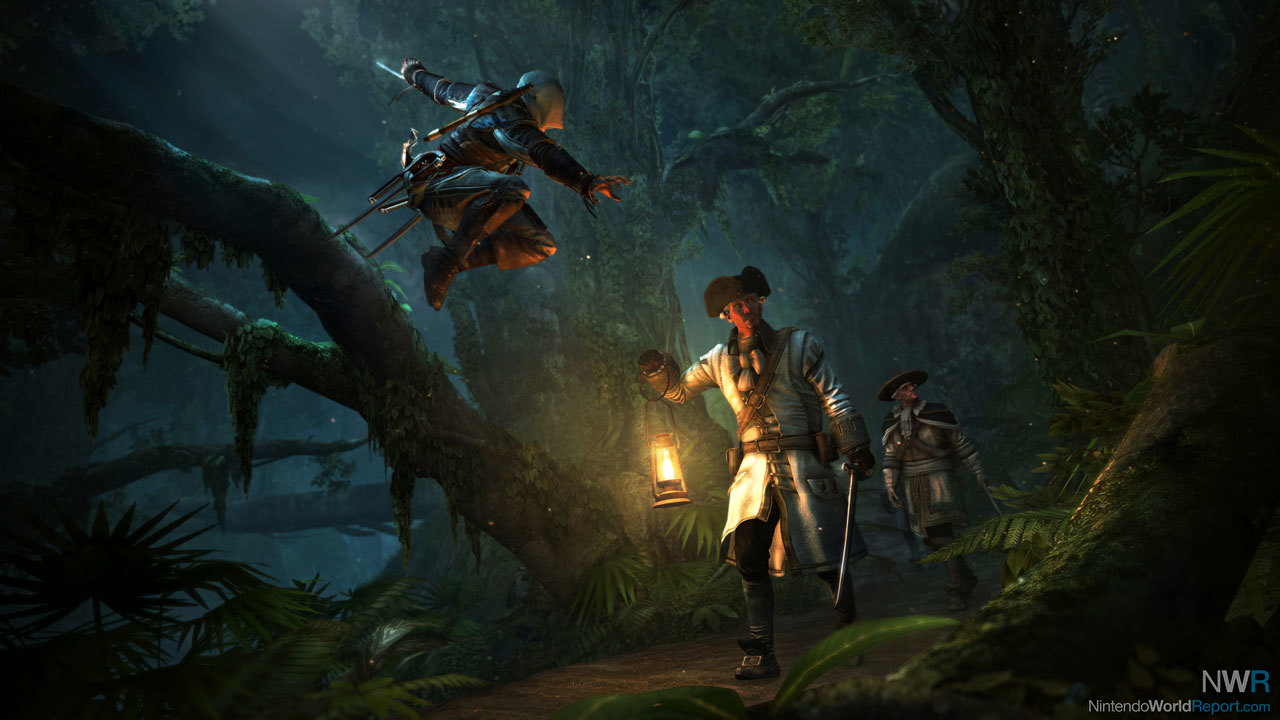 Desmond Miles, the present day descendant of all the folks you have played as in past games, was the main protagonist in Assassin’s Creed games up to the conclusion of Assassin’s Creed III. Assassin's Creed IV picks up sometime after the conclusion of ACIII, with Desmond absent, and an unnamed, avatar-less character filling in as your controllable character. While this drives sections full of narrative, the lack of personality can be felt in and out of the Animus sequences. With a faceless character, it is harder to care about what goes on in the present day when there is such an exciting story being told in the Caribbean.

This exciting Caribbean story is far wilder than what Assassin’s Creed fans may be used to, thanks to the main character Edward Kenway. Grandfather to Assassin’s Creed III’s Connor, Edward is the captain of his own ship, out to discover more information about the mysterious “Observatory.” Edward isn’t your standard series protagonist as he operates independently from the assassins while working towards his own goals. His adventures take him all over the Caribbean, dealing with many people, templars, and assassins alike.

When I say Edward travels all across the Caribbean, I am not lying. The world map involves several large land masses filled with cities, jungles, and beaches; all of which are available for you to explore. This vastness is very welcome, but also hampering to the experience in some ways. Travel becomes a tiresome issue for those looking to blast through the story quickly. As you unlock more areas, fast travel becomes more and more useful for revisits, but the first trip to a location can take some time, especially on your relatively slow moving ship. 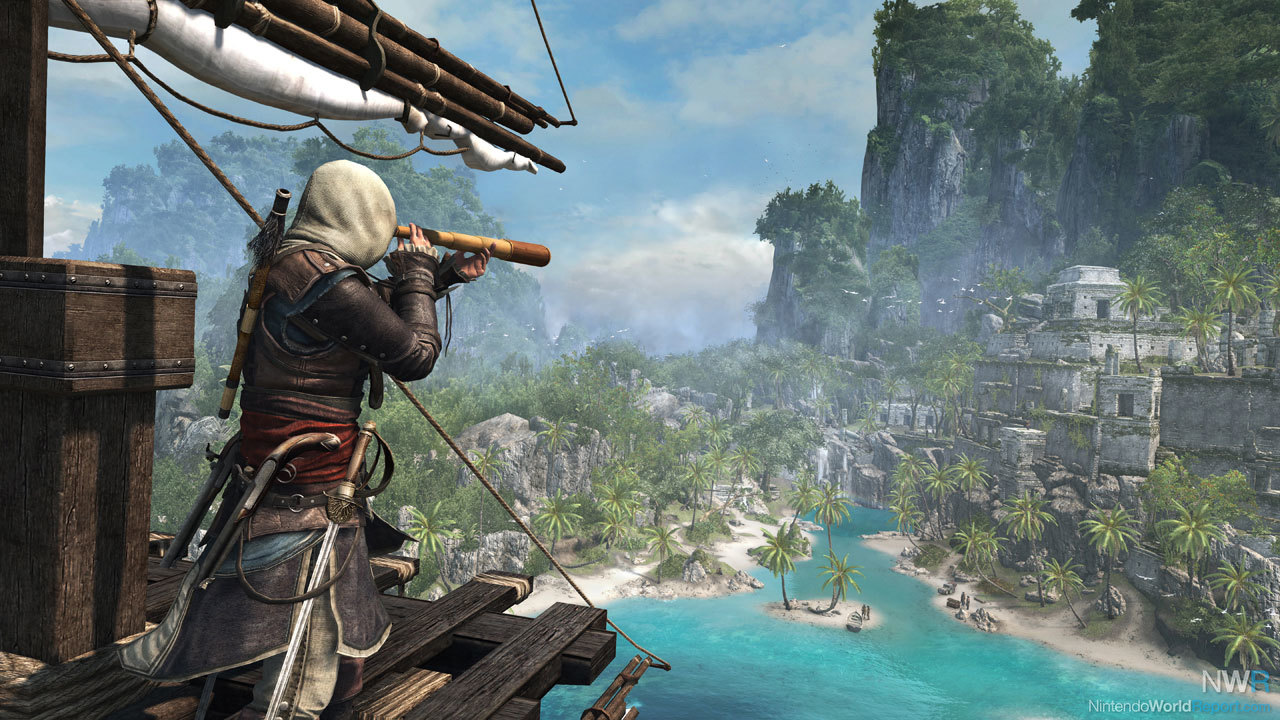 Sailing around the ocean, engaging in combat, and tailing other ships make up about a quarter of the gameplay in Assassin’s Creed IV. There is nothing wrong with all of these elements as they are fun, however, the depth one would like from such a large portion of the gameplay isn’t present. Fighting every ship plays out the same way, and following others only involves steering out of the vision of enemies. The core land-based gameplay provides you options on how to carry out missions and take down targets, but while on the ocean, there is typically only one straightforward way to get the job done. The ship can be customized and upgraded, but the upgrades are tied to you repeatedly sailing and looting the others you run into on the ocean.

One new sea element introduced in Assassin’s Creed IV that struck me very positively was the diving functionality. Being able to dive deep underwater to uncover shipwrecks while avoiding the looming threat of sharks is quite a rush. Managing your stealth, similar to how it is managed on land, coupled with a limited air supply, made for an exciting twist on the stealth gameplay presented elsewhere in the game.

Stealth gameplay is the key to land-based missions in Assassin’s Creed IV, more so than in previous Assassin’s games. Each mission revolves around sneaking between bushes while picking off your targets one by one until you can reach your true objective. With this being the core of the game, developer, Ubisoft Quebec, made sure there were plenty of options for you along the way. The new blow darts give you the ability to silently take out enemies from afar, while the new free-aim gun play mechanics come in useful when you are in a pinch. With so much variety, you don’t have to repeat the same strategy over and over again, making land missions not feel like a bore, despite their usual slow pace. 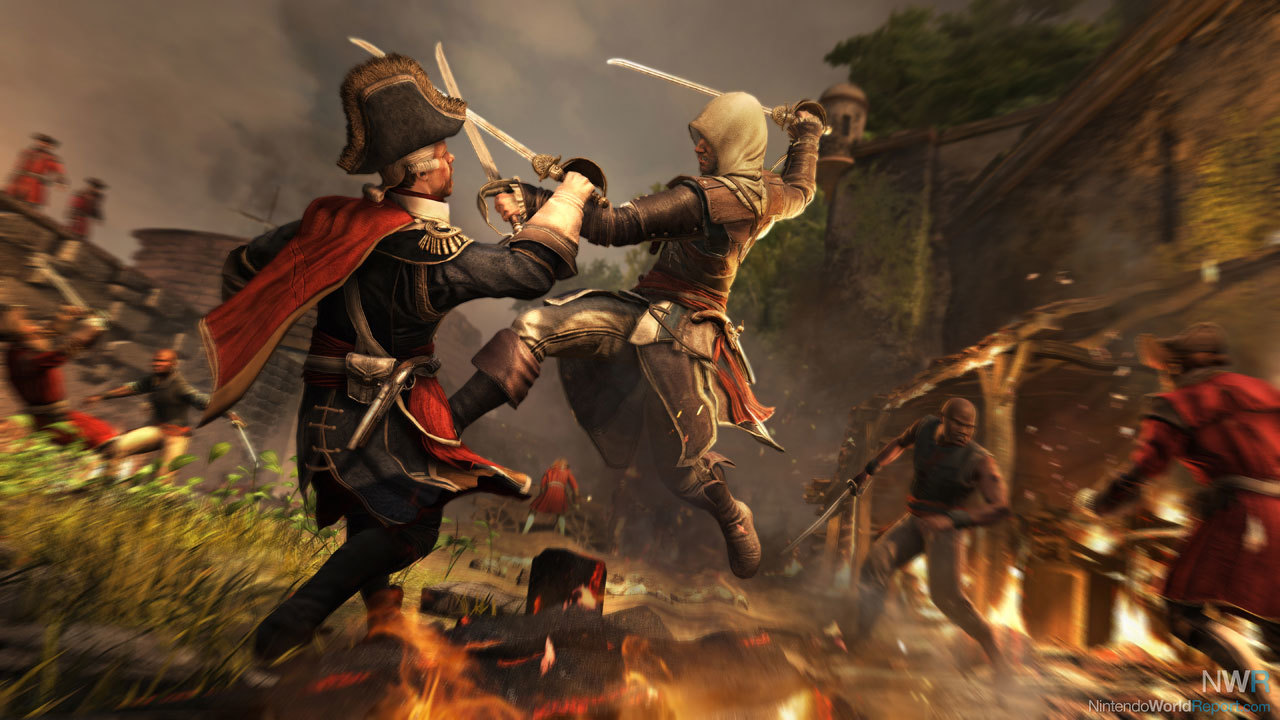 Black Flag looks great on the big screen as well as shrunken down for off-screen play. Shadows in some of the lusher environments really bring the space to life and the water effects on the ocean look great. Some poor textures are present throughout the game, but nothing to hamper the experience. Audibly, the soundtrack feels thrilling. Music while you are in chase or battle resonate well with the action. There is less to be said of the tunes scattered throughout the rest of the game, but all around, the quality of the music is superb.

Assassin’s Creed IV: Black Flag boasts tons of content, an exciting story, and plenty of fun gameplay. Some of the series tropes are running thin as the series is now going on its sixth entry, but it is still a quality experience. Black Flag is currently my favorite game in the series, not only because of its heavy use of piracy, but because of the constant swapping between land and sea gameplay. Black Flag is a must have for fans of Assassin’s Creed, and newcomers with a love for pirates will surely find something to love.

Any gamepad features except for off-tv play? Interactive map?

And I know we're all supposed to be so damned excited about bigger and bigger game worlds these days, but wow....everything about this game just sounds exhausting. Like, it gets to the point where you don't WANT to gallavant back and forth across the entire Caribbean, or even a city the size of all five boroughs of New York.

@azeke: The GamePad mostly functions as a map that you can zoom in and out on. Other than that, there wasn't anything else really going on with it. If I recall correctly Assassins Creed III had some other features, but this one does not.


@MetalMario2: We've gotten Pirates of the Caribbean, but other than that there are not many pirates in the entertainment industry. Also, I agree with you that at some point game game worlds get to big. There are certain points ACIV where you are forced into sailing for 5-10 minutes just to get to a location.


Any other questions about the game?

@Patchkid15, got a couple of questions about the wiiu version of black flag.

Q1: Can you set waypoints on the map(on the gamepad screen)?, i know its supported in the companion app. But i would prefer to just make waypoints via the touchscreen of the controller (if thats supported ofc).

Q2: Any framerate issues with the game?, AC3 had a couple of hickups here and there and would like to know of those issues are ironed out.

In regards to question one, you cannot set waypoints on the map using the GamePad screen. The only map feature available using this screen while in gameplay is zooming in and out. To access waypoint settings you need to open the map with the (-) button.


As for framerate issues, there may have been one instance when I was being chased down by roughly 30 guards, as there was tons of action going on, on the screen. Other than that, it has seemed pretty flawless.

In regards to question one, you cannot set waypoints on the map using the GamePad screen. The only map feature available using this screen while in gameplay is zooming in and out. To access waypoint settings you need to open the map with the (-) button.

That's disappointing to hear. It seems the same as III.

Ah well, by this point i'm hooked on the series so i will get the game no matter what. The only question is when (have to clear up some more games) and which platform (Wii U or PC). Will wait for more comparisons on graphical fidelity comparisons and then will make my mind.

Apparently Unisoft locked it away behind online pass apparently or something.


gif with Gamepad map. At least you zoom out more this time.

The gamepadfeatures in AC 3 were the same i think. The Inventar at least should be gamepadded, very poor Ubi, you ve made it in ZombiU (very well), whats the freaking problem?  :@

But AC3 wasnt even a game, its a movie, a bad one. Where is the gameplay?

I know, late reply, but i play ac3 and zombiU atm, so its comparable for me.