The SteamWorld series from Image & Form started its life on DSiWare, where the series began with SteamWorld Tower Defense. It was a brilliant tower defense game, in which concepts were turned upside down. Instead of being a bunch of trigger happy humans, you played as hardworking robots that explored and delivered goods from mines. After defeating the humans and leading the world to ruin, the story now takes a turn to safer ground as we go explore the mines ourselves in SteamWorld Dig. This Nintendo 3DS eShop title takes unconventional steps in delivering its elements to the table and I absolutely adore the game for that. 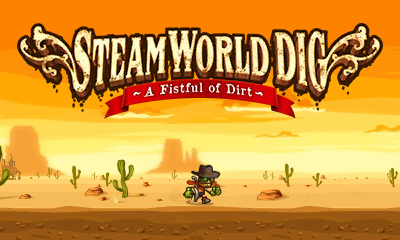 You play as Rusty, a lonely robot that comes to the mining town of Tumbleton. He received a deed from his uncle, who he finds in ruins at the start of the journey. Rusty shortly after comes across a cast of helpful characters who are in the need of a hero to build up their town. The dialogue isn’t too deep, but the narrative is enjoyable and it keeps you going through its running time. As we head into the gameplay elements, however, things become harder to describe. The game takes elements from older Metroid titles by having you explore the farthest reaches of the mines to discover the unknown. Additionally, Rusty becomes stronger as you explore the caves and find new abilities. Nevertheless, the game has a bigger platforming focus than the Metroid games, and it is here where the abilities become so important. Quickly after your humble beginning, you gain the abilities to run and do a water driven super jump. The various obstacles play well on these abilities and they become handy while you are exploring the bigger world.

You overcome this bigger world by using your trusty pickaxe to smash blocks and create entirely new pathways. In the beginning, the amount you can do is severely limited; this is where the ore stones come into play. By collecting these stones and bringing them back to the earth's surface, you can sell them at the trade shop and gain yourself the ability to purchase distinct upgrades. Better pickaxes can help you cover more terrain, bigger pouches let you carry more ore stones, and better lanterns will allow you to stay underground a tad longer. There are also various items to buy like ladders and lamps to create easier and more approachable paths. By the sounds of this, you might think that there is a huge emphasis on the management of your resources, and you would be totally correct on that. You must take note of these various elements to get the most out of the game, and this might hinder the experience for some players. The digging takes a while to get fully going, but once you’re past that very small block, it’s a fun filled ride to the finish. 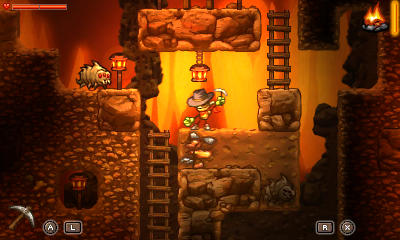 Another thing that makes paying attention so important is that danger is always lurking around the corner. The various environments are filled with enemies who will gladly take you down if you’re not paying attention. Even blocks can sometimes break on you and trap you with an enemy. Quick reflexes and some strong mining skills are needed to help yourself in the race. However, enemies will likely drop items to replenish your health or lanterns to extend your time underground, so there is plenty to gain by exploring the mines. If you get crushed by falling rocks or by an opponent, you will lose half of your money and half of your loot. Your loot can be recovered at the place you dropped it, but it’s still enough of a punishment that you’ll want to be more careful the next time around.

The game takes roughly 13 hours to see everything and you will have full enjoyment over two or maybe more playthroughs. While the pathways are similar in every playthrough, the drops of mineral stones and the enemies are different, making a second playthrough instantly fresh. Players can look forward to reliving their adventures with Rusty any time they please and they can try different strategies every time they play, which is quite exciting in its own right. Of course, the game has a start and an end, but what you do between both is way more important and is never completely the same twice. The time spent exploring, finding caves, and creating new paths never becomes boring, and that speaks to the volume of care put into the product. 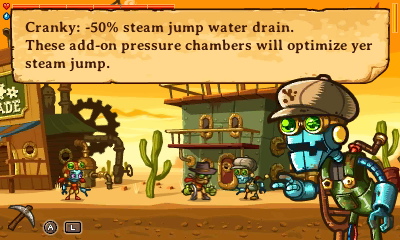 The presentation of title is certainly impressive with its usage of 2D sprite art to give the world life. While some of the areas aren't as colorful, SteamWorld Dig compensates for this by giving everything a solid feel. The textures have a craftsmanship to them and their composition shines on the Nintendo 3DS screens. Everything comes alive with the 3D effects as the foreground really pops and the backgrounds give you something to see in the distance. The music fits the western mood of the game, and the guitars and sound effects give the deserted landscapes additional color.

SteamWorld Dig is a fresh game for the Nintendo eShop and one of the best digital games available on Nintendo's 3D handheld. While the digging takes a little while to get going, it is just a small hump towards an adventure in a world that gives you the total freedom to explore. Collecting the various ore stones, defeating enemies, and exploring caves stretch the journey to roughly 13 hours, but even then the game still has more to offer. Going through the game again still felt fresh, thanks to the unpredictable nature of the title. This gives the game some needed longevity and makes it a game that truly keeps you engaged. I haven't experienced this many Nintendo eShop titles of this quality, but that makes it all the more special when the developer gets the job done.

Wow, impressive review. not often do you get to see the words, "unique, fresh, unpredictable." Plus the 9/10... sounds like an experience we don't get to journey down to often. Might have to pick this up. What's the price... I don't think I see that anywhere (( may be blind)

Picking this up tomorrow for sure.

...Let me express how amazed we at tiny Image & Form are to see this forum thread... As a formerly iOS-only dev, we have gotten used to screaming into the void and praying for attention. And here - and elsewhere - we've got people happily running forums on the game. Talk about contrast!

You're asking for follow-up on SteamWorld Dig and I'm happy to tell you that as of yesterday, thanks to the overwhelming response and a relieved sense of having a potential big hit, we decided to forge ahead on the next project in the series. SteamWorld is here to stay, and we'll stay on the 3DS.

About 5 hours in and this game is seriously making a case for download of the year for me.  It is a crazy mix of Metroid, Dig-Dug and Minecraft and before this game I would have said "lame."  There are a few cheap deaths here and there but ultimately you learn how to avoid them.  The risk/reward mechanic can feel really rewarding, especially when you make it back to the surface with just a sliver of life and full of loot.  What sold me was Daan's interview on connectivity.  If you are on the fence, go listen to that.  I thought the dev did such a good job clearly relating the concept of the game, while also making it sound fun to play.  I feel like this would have been good enough for a full price release on DS and $8.99 on the eshop makes me feel like I got a hell of a good deal.

Thanks for the interview and review Daan. Top notch.


(Also, NWR is quoted on the description on the eShop.)

I bought this over the weekend and enjoyed it thoroughly. I haven't bought anything off the eShop in a while so this felt well worth it. The review is spot on, everyone should play this.

Having just finished this game I would like to say that I totally dug it (see what I did there?).

I can see how things might have gone differently, but my play through of the game could not have gone smoother. Coming in at around the 8 hour mark, I never once found myself becoming frustrated or grinding for minerals. I always had some exciting new upgrade to work towards or was finding some surprising new contraption in the depths of the mines.
My worry going into Steamworld Dig was that I would run out of equipment to upgrade. I had so much fun at the beginning of the game finding loot and buying upgrades that I was very sceptical that the game could maintain that enticement; at the very least I expected that at some point the grind between upgrades would become intolerable.

For my play through, however, nothing of the sort happened. In fact, my play through of Steamworld Dig was so perfectly judged that I got the last couple of upgrades about 20 minutes before finishing the game. The very satisfying feeling of discovering new areas and buying new items never really diminished for me, and carried me straight through from beginning to end.

Steamworld Dig is definitely my favourite 3DS eShop game of the year thus far. What a joyous little surprise!