This game will take you to Cloud 9.

As someone who has been playing and loving platformers ever since I could retain memories, Cloudberry Kingdom was a game that immediately piqued my interest. Not only did it promise a challenge, but it was also being touted as an “endless platformer” due to its random level generator and incredible amount customization options. While “endless” is a bit misleading in terms of how long a level actually lasts, it does represent how long this game will keep you hooked. 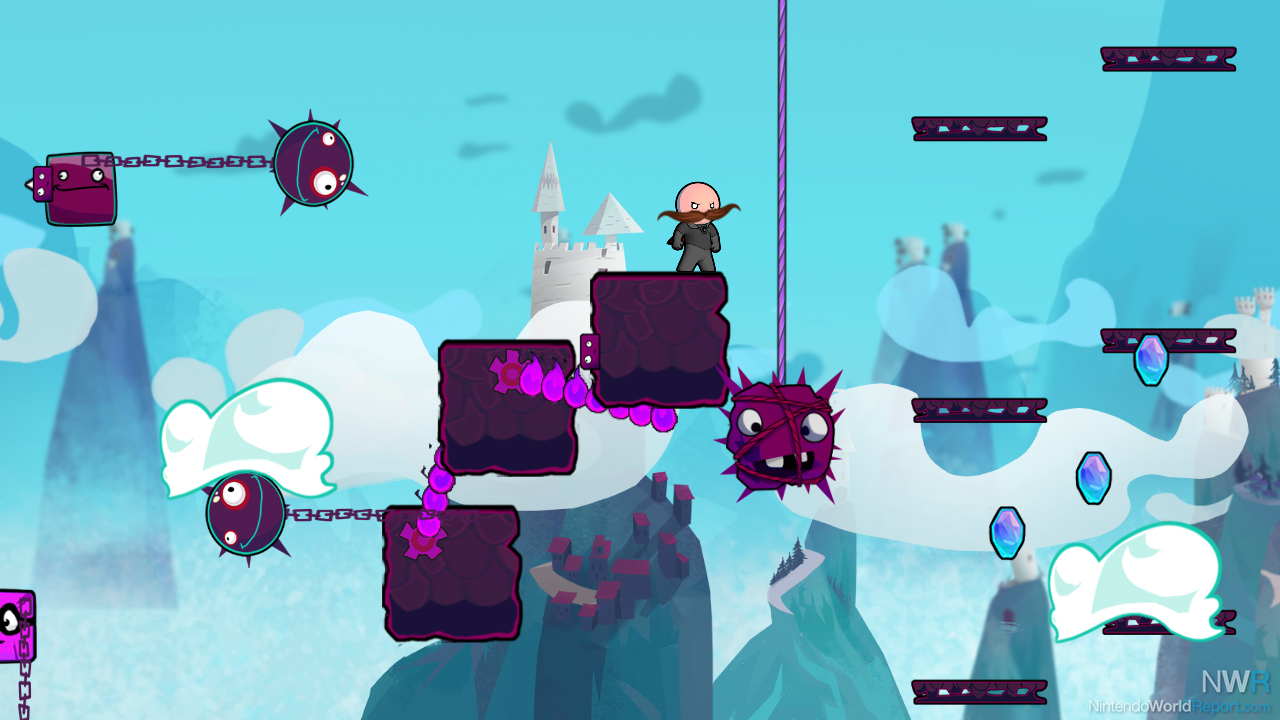 Cloudberry Kingdom tells the tale of Bob, our aging hero, on a quest to save the princess and a mystical orb from an evil king. In between each world, we’re treated to a cutscene that features all three of these characters in a charming papercraft style. Unfortunately, what’s not so charming is the actual writing itself. It attempts to tell its cliche story in a sarcastic, ironic way, but it ends up being more obnoxious than anything else. The cutscenes are fully voice acted, but there was no real emotion or feeling put into it, which made me care even less about the story and characters. I would suggest skipping them. 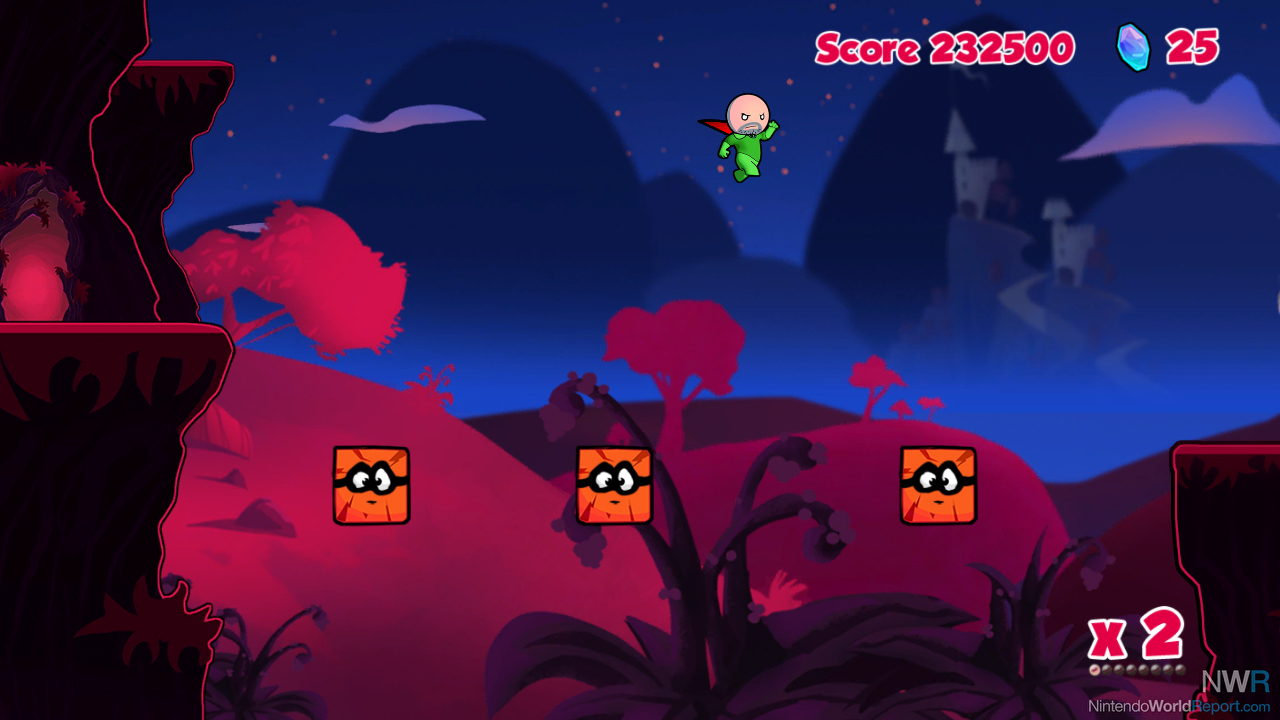 Thankfully, the cutscenes do very little to drag down the actual game itself. In the game’s Story Mode, you play through seven different worlds with their own theme, all of which contain 40 levels each. Not all of the levels in the Story Mode use the game’s touted level generator. The exceptions are instead deviously designed by the game’s developers, Pwnee Studios. In each level you’ll encounter various obstacles, including pits, bugs, fire bars, moving platforms, and more. While the levels are somewhat simple in the first world, they end up becoming harder and harder as you progress. The game gets especially tricky when it introduces a specific power-up every ten levels. There’s the Double Jump which allows you to jump again in mid-air, the Jetpack that allows you to soar upwards for a limited amount of time, the Tiny Bob/Giant Bob powerup that makes you smaller or larger, and the Spaceship that automatically scrolls forward as you dodge enemies. Most of these powers are really fun to use, and provide an extra challenge to some already tricky levels, but some powerups like the Stone Wheel or Cardboard Box can make things more frustrating than fun, since they don’t give you as much control as the others. 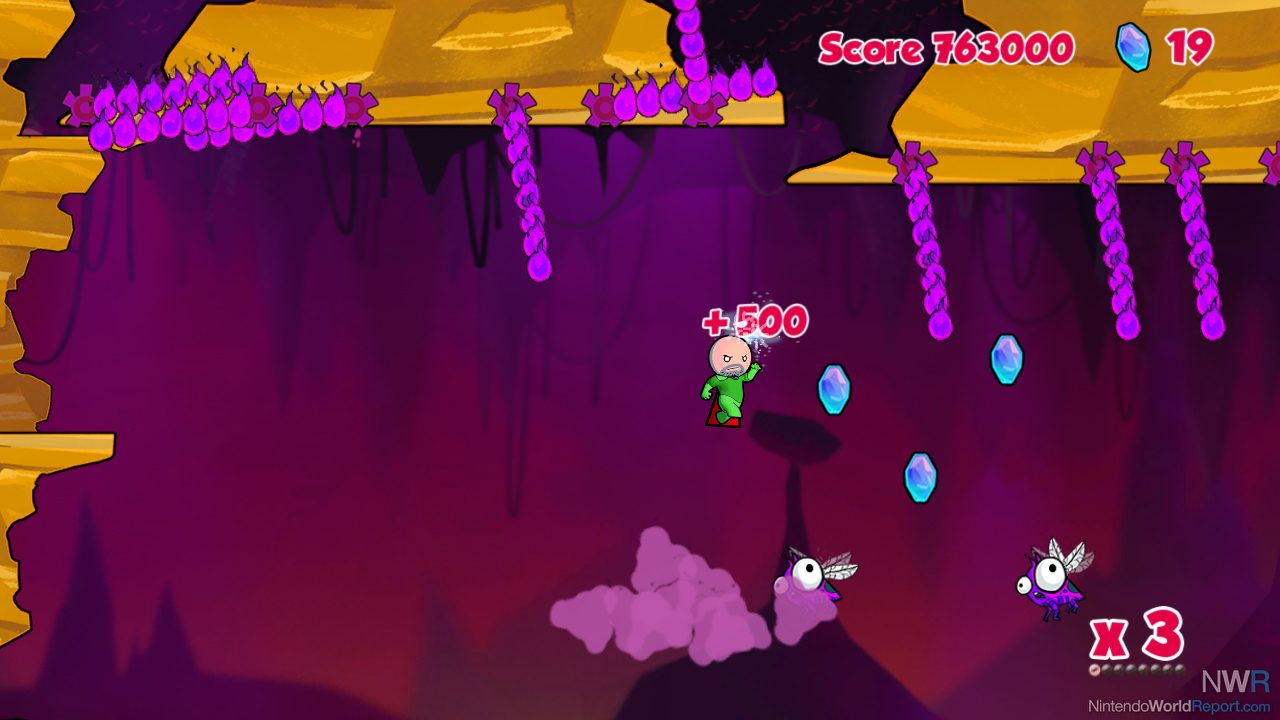 Even without those terrible power-ups, the game can sometimes be unforgivingly difficult due to what I call a “do it our way” level design. This is when the levels are designed to be completed in a very specific way, down to the very last split second jump, compared to figuring out your own way to complete a level at your own pace. I’ve always despised this kind of level design in platformers, because it makes me feel less like I finished a level because of my own skill, and more like I finished it because I followed a strict set of rules. Thankfully you can enable various features in each level, which include showing you how to complete a level, slowing down the speed of the game, and showing you a dotted-line path to the end of the level. These are activated by pressing X and spending gems that you collect in each world. These features came in handy, as some levels get way too hard to try and complete on your own. 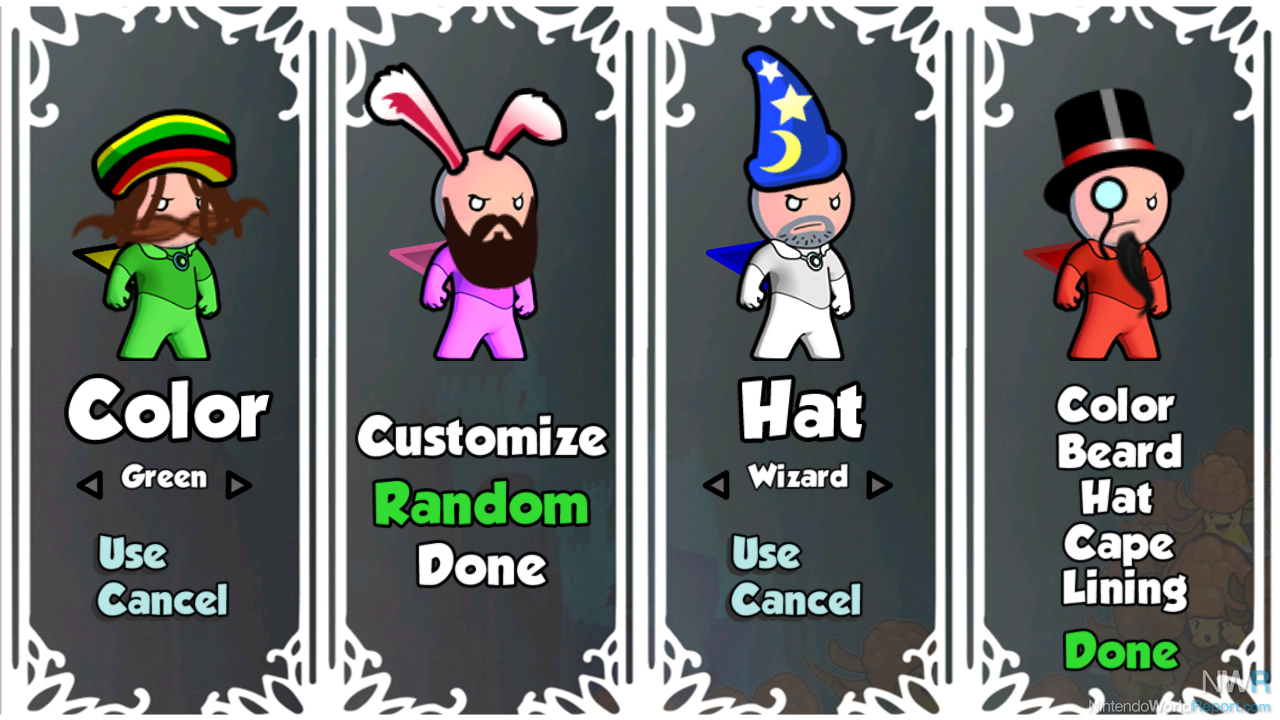 There’s also an Arcade mode and a Freeplay mode that feature the game’s most unique aspects. In Arcade mode, you have four different sub-modes that all track your high score with online leaderboards. “Escalation” gives you 15 lives, lets you pick a specific power-up, and tests how long you can go through randomly generated levels until you run out of lives. Time Crisis is the same as Escalation, only you’re given a time limit instead of lives, which can be replenished by collecting gems in each level. Hero Rush gives you the same time limit, but your power-up changes with each level. Hybrid Rush is the same, but it combines random power-ups together, rather than just giving you a singular one. Each one of these modes is very addictive and gives you plenty of incentive to keep playing, including the previously mentioned online leaderboards, unlockable characters and costumes, and much more. Freeplay Mode just straight up gives you complete access to the game’s toolset and lets you customize just about every aspect of how you play, from how long and difficult the levels are, the frequency of hazards, adjusting acceleration and speed of your character, how high and frequently you can jump, and much more. I would prefer that we could somehow use these customization options in other modes of the game, at least for fun, but it’s still a fantastic addition. 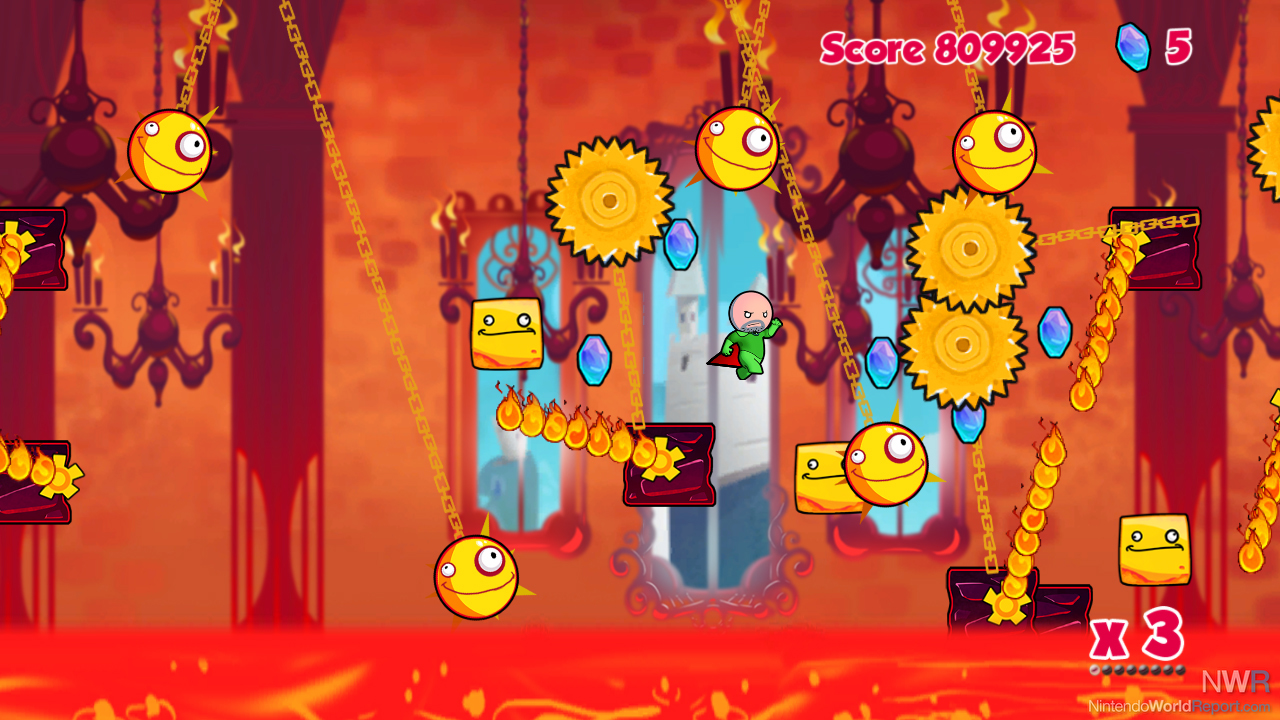 The graphics, sound and music of the game aren’t really anything special. The graphics are well drawn and colorful, and all the hazards stand out well enough that I never really feel like I didn’t see something coming. The music, on the other hand, doesn’t really fit the game very well. Instead of each world having its own song, the game is constantly looping a playlist of generic electronic music. Each song fades out as it ends while the next track loads, so every now and again, there will be moments where there’s absolutely no music being played at all, which is a bit jarring. My advice is to just go into the Options menu, turn the music all the way down, and just put on a playlist of whatever music you like. 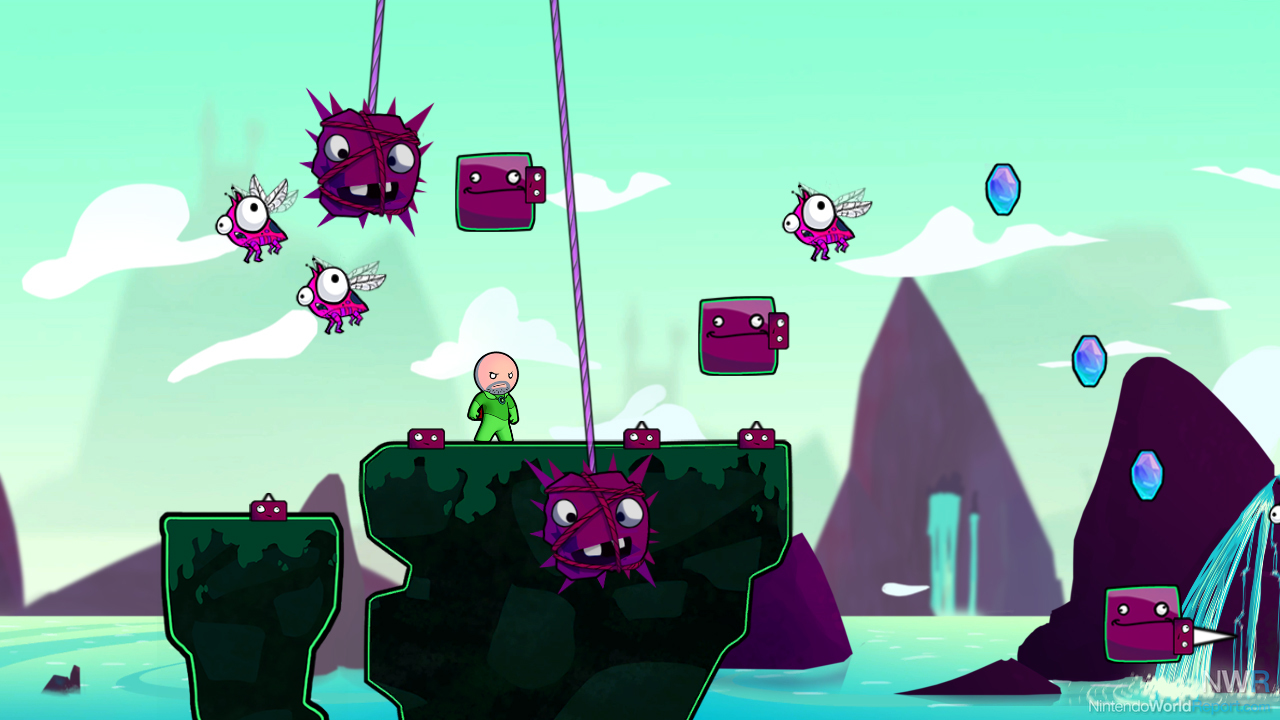 The only Wii U feature present in game is Off-TV Play, which is constantly running on the Gamepad at all times. Other than that, the Wii U version of the game doesn’t have anything that feels like it was designed with the system in mind. When you boot up the game from the Wii U Menu, it doesn’t even show the game’s logo, nor does it have a short musical piece to go along with it. It also would’ve been nice to see some special Miiverse integration, or being able to design levels using the touch-screen. 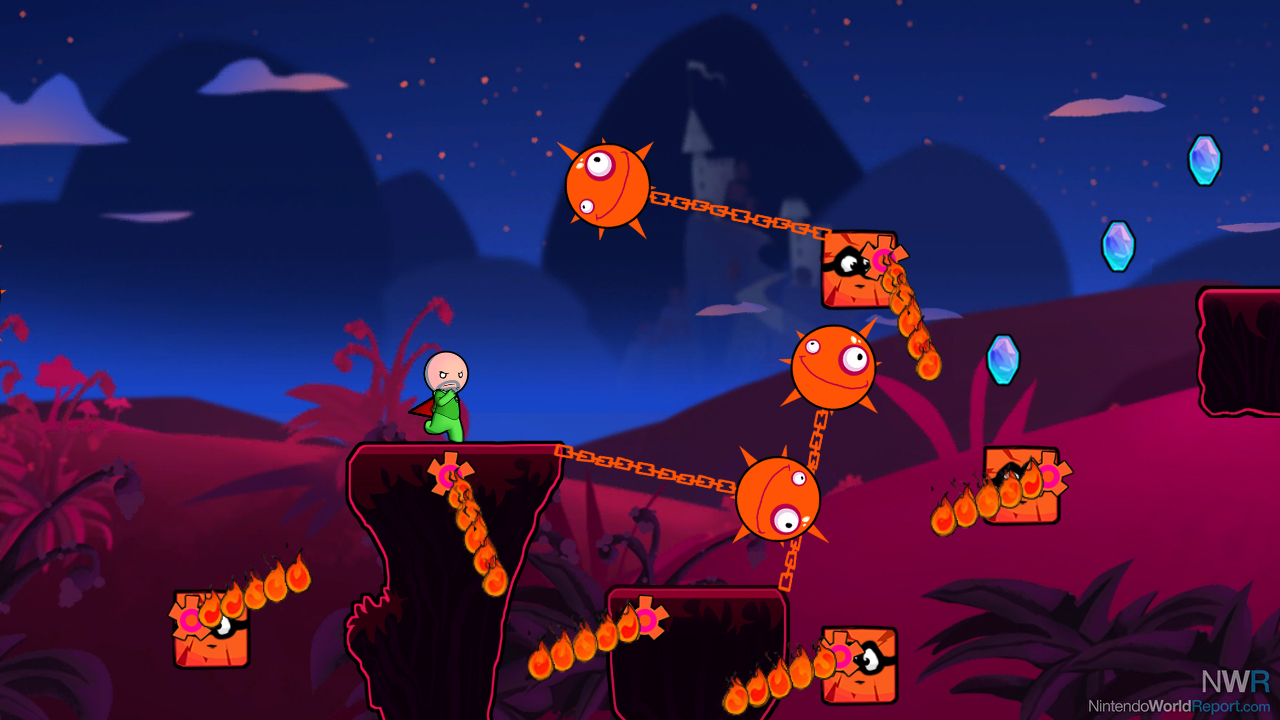 Despite the lack of Wii U specific features, I’m happy that the system got this game. Cloudberry Kingdom is an excellent platformer that every Wii U owner should have in their digital collection. Despite some annoyances with the difficulty and a few lame power-ups, the game is incredibly rewarding when you finally complete a difficult level or reach a new high score. Congrats, Pwnee Studios, you made a berry good game.

My friend downloaded this game for his girlfriend because it's hilarious when she gets mad playing videogames. I tried it on Saturday. This game is obscene. It's fun for a little while, but then I felt like giving up on videogames forever. Not really for me, but it's fun to watch other people get angry or beat a difficult level.

My friend downloaded this game for his girlfriend because it's hilarious when she gets mad playing videogames. I tried it on Saturday. This game is obscene. It's fun for a little while, but then I felt like giving up on videogames forever. Not really for me, but it's fun to watch other people get angry or beat a difficult level.

I've played this game throughtout the beta.  I find for the most part its fair.

How far did you get?

Lets see.  I've gotten to Level 50 on all the individual heroes but the Box, Wheel, Rocket Sled, and Pony in the first arcade mode.  I've gotten to at least 70 on Time Crisis though only 60 on Wii U.  I'm not sure in the story mode I know I'm at least into the 2nd chapter some.  Hero mode I've gotten through only 15 on Wii U because of it being behind an unlock wall but been over 50 on the beta if memory serves.

I honestly found some the different Mario games more frustrating earlier on.

I happen to enjoy the music in this game. I find that it's extremely easy to space out and enter a trance-like state when playing Cloudberry Kingdom (in a good way). The music complements this very well.

Story mode is pretty lame in my eyes. It just doesn't play to the strengths of the game.

I see it being deliberate that Arcade Mode is presented first on the menu. That is where Cloudberry kicks ass, with manic, randomly generated levels. It's like Spelunky but I don't feel like I'm totally fucked every other level. 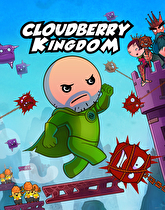