Injustice: Gods Among Us

The superhero brawler you've been waiting for.

I was pretty hyped about Injustice: Gods Among Us after E3 2012, as I love the DC Animated Universe and many of its characters. Here was a fighting game created by Neatherealm, the people responsible for the excellent Mortal Kombat reboot released a few years ago, featuring an extensive roster of DC characters beating the snot out of each other. As time went on and more characters were revealed, I became more and more excited. Eventually, I went into “media blackout” mode so that I’d be pleasantly surprised, avoiding all trailers and previews, although I still paid attention to new character reveals. The game has finally dropped, and I’m happy to say my excitement has paid off. Injustice is a great fighting game and, more importantly, a very entertaining superhero game.

It’s not Smash Brothers, but I found Injustice very easy to learn. The X, Y, and B buttons are your standard punches, the A button provides a character-specific power (a ring of mechanical bats for Batman, a strength increase for Superman, etc.), and various combinations of directional + attack buttons trigger special attacks. There are no attacks that are as complicated to execute as in the old Mortal Kombat or modern Street Fighter games, thank you—the most complicated maneuver is something like Down, Down, B or Back, Toward, Y. In fact, for the most part, everybody shares the same special attack inputs but with different results. The game is very easy to pick up and play with only a brief glance at the special attack menu before the fight. 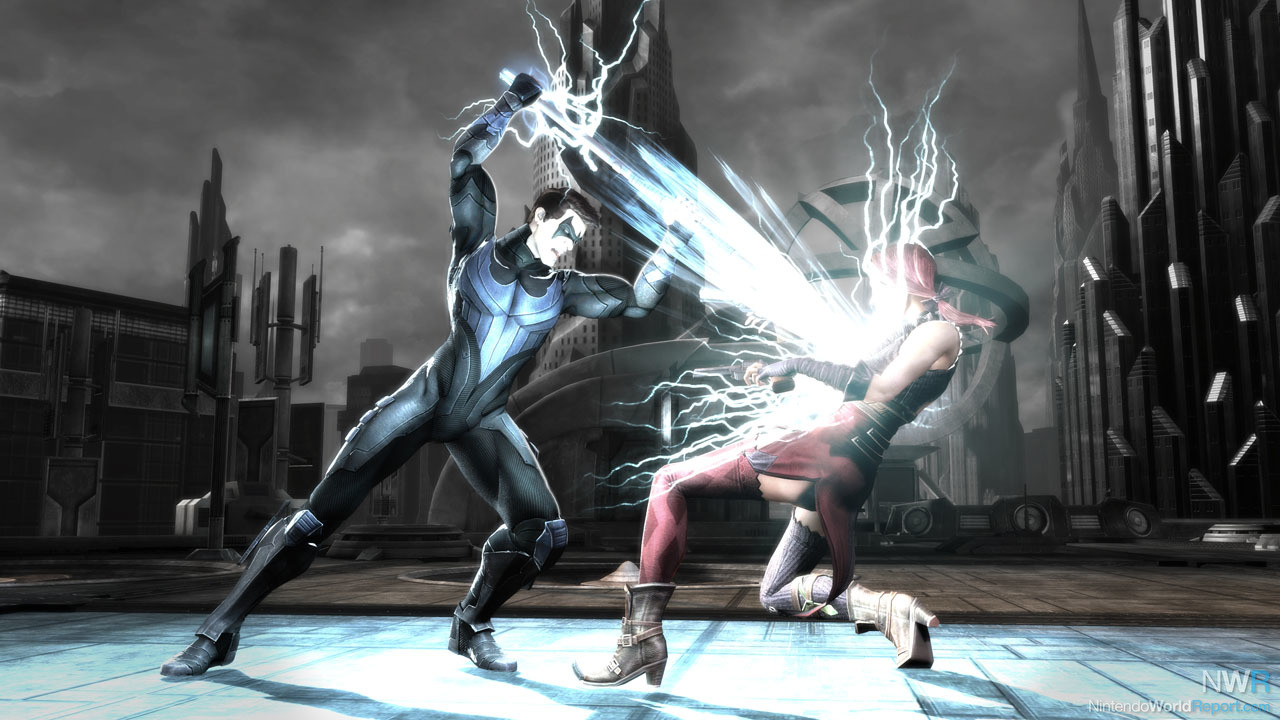 Standard attacks and special attacks won’t always win the match, though. A big part of Injustice’s charm is how the characters interact with their environment. Each arena is packed full of objects that can be used to deal a ridiculous amount of damage. Using the R button, you can trigger many different environmental attacks: throwing an overhead computer monitor or a police vehicle at your opponent, breaking open a pipe and venting hot steam in their face, pressing a big red button and watching missiles stream toward your enemy, etc. Fights can be won or lost based on how you manipulate interactive objects, and it’s super fun. Additionally, each arena has a breaking point. Shove somebody toward one end of the screen and press Back and the B button, and you’ll smash your opponent through a wall and end up on another battlefield, dealing a lot of damage. My favorite level transition involves Darkseid being angry at the interruption.

Finally, filling up your super-meter allows you to attempt a super move by smashing the ZR and ZL buttons. Your first blow has to land but, if it does, your opponent is in for a world of hurt. For example, Batman zaps his enemy with some electric prods, throws an exploding Batarang at them, then leaps over the Batmobile just as it runs his target over. While not every super move is as elaborate as that, they’re ALL ridiculous, consistent with the over-the-top nature of the game.

The main Story mode is shockingly fun, and similar to Mortal Kombat in that you’ll take control of many different characters as you follow a complicated and very well-written chronicle. Basically, Superman goes rogue (for good reason) and decides to stop holding back, imposing his iron will on Earth and becoming a fierce dictator. Other former heroes fall in line (it’s basically a variation on the “Justice Lords” story). The heroes of another dimension are pulled into this alternate reality and attempt to stop Superman’s reign. DC writers Justin Gray and Jimmy Palmiotti helped write the story, so it feels very authentic and something I wouldn’t be surprised to see in a comic or DCAU movie. 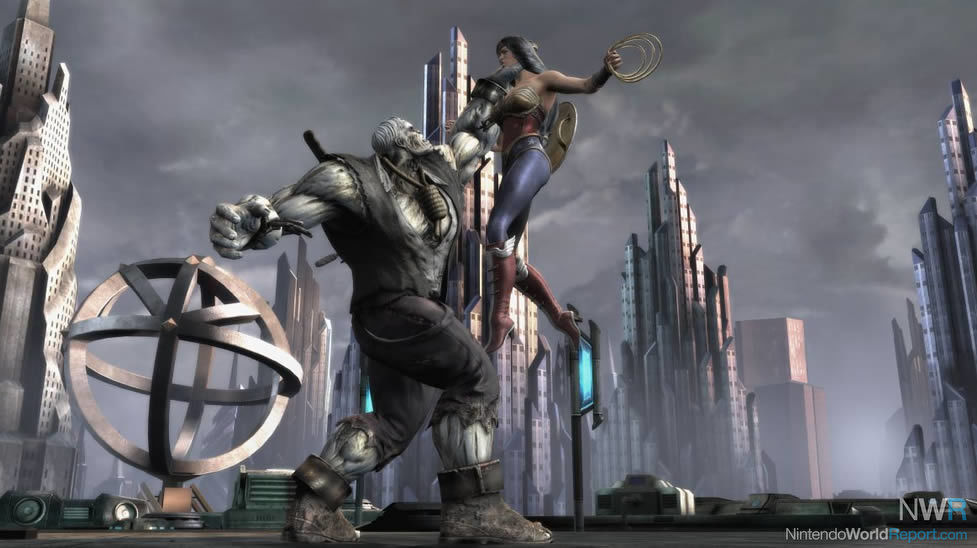 Once you’ve beaten Story mode, which is maybe eight hours long, you can complete S.T.A.R. Tower challenges, which are analogous to the Kombat Tower: you play several fights as each character, and each fight has a primary goal and two additional goals. You can earn up to three stars per fight. The more stars you earn, the more character missions you unlock. You can also take on Arcade-style “Battles,” most of which have unique properties (can’t lose a fight, start with a quarter of your health, etc.). Battles can be fun, but they have a tendency to start out super-easy and become unfairly hard at the end. We’re talking a “opponent does nothing” to “opponent performs an endless combo juggle that kills you in ten seconds” kind of escalation.

Finally, there’s local and online multiplayer. Local has no problems, but there are a few with online. The most egregious problem is that there’s no friend-specific lobby. If I wanted to play with, say, Neal, we’d have to coordinate outside of the game to select “search for lobbies” at the same time, and hopefully we’d be matched up. Once you are actually playing together, the game is great. Voice chat is present and pretty patchy, but there was never any input lag. The only difficulty was that we were disconnected a few times. Actually, the game keeps track of your win/loss record AND how many times you’ve been disconnected. This information shows up on your online avatar, which is customizable. 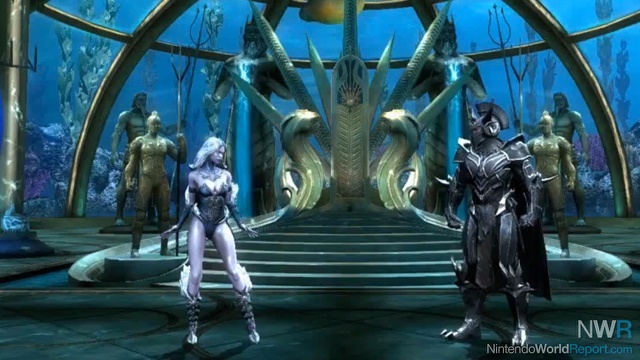 Killer Frost and Ares, the two least interesting and most out-of-place characters in the game.

Unlockables are limited to alternate costumes (there aren’t many), concept art, music, and new Battle types. Seemingly every time you accomplish something in single or multiplayer modes, more avatar customization options open up. I’m sure all the exclusive pre-order bonuses, like GameStop’s “Red Son” costume pack or Wal-Mart’s “Batman Beyond” costume, will end up on the eShop eventually, and we already know that four additional characters—including Lobo—will be available before too long. There’s a lot of content here, and I can’t recommend Injustice highly enough for both fighting fans and DC enthusiasts. Oh, and here’s a protip: Aquaman is the secret Best Character (no joke)!

Did you have problem with blocking? I had problems with the blocking.

Blocking can be a pain in the ass because you have to press away instead of a block button, (I hate when a fighting game is like that).

I am so, sososososo glad that this game ditched mk's block button. Holding back to block is how it has been since street fighter established most of what we're enjoying today.

Also, dunno if we're getting DLC. NRS has been replying to questions with that typical "No announcements have been made for Wii U -- stay tuned to official channels" which means unless you're Ubisoft's assassin's creed, no dlc.


I want to believe I'm wrong though

If you're having trouble blocking, keep in mind:
Players will try to "cross you up" - jump on you so that you have to block the other way, or have to guess which way to block.
You have to block a lot of stuff standing - overhead attacks (every character has them I think?), jumping attacks, and jumping projectiles! Don't get caught exclusively crouch-blocking.

Some reviews I've read online had reservations about the balance of the environmental attacks, mainly concerning that they were really easy to carry out, did massive damage and were really hard to block. Do you see that as a potential problem?

Lobo is gonna be the first DLC character, (if I'm right), but I think they should REALLY make a Cyborg Superman DLC! That would be so damn awsome!