Unstable at any speed.

Sonic & All-Stars Racing Transformed on the 3DS didn't need to reinvent the kart-racing genre. It didn't even need to match its well-received Wii U version, which arguably bested Nintendo at its own game in some respects. All it would have taken to make the handheld version worthwhile was a halfway decent approximation of the console version's slick presentation and dynamic tracks. Instead, Sonic and company's lap on the 3DS chugs along as a boring, untenable mess of a racer. 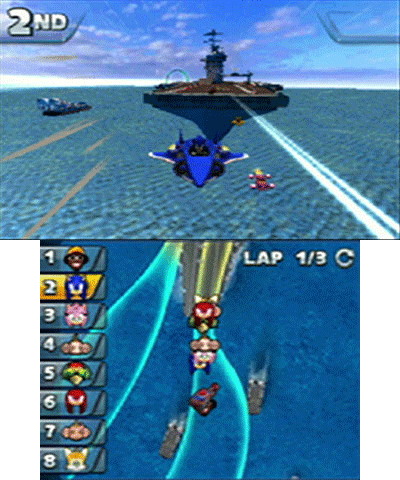 Transformed on the 3DS doesn't break from the formula established by its console counterpart, but it manages to dilute it to the point of tedium in several cases. The varied, objective-based challenges that made up the latter's career mode are replaced by a small selection of races, time trials, and one-on-one races in World Tour mode here, making the process of earning stars to unlock new characters and venues a test of your tolerance for the mundane. Unless you absolutely need every available track and racer, there's little point in grinding through each section of this mode, which offers little more variety than you would find in the other individual modes.

In fact, apart from accessing some of the more interesting courses or using a favorite character, there doesn't seem to be a reason to invest any time in Transformed. The experience points you receive during and after races are unique to each character you use, but earning enough to reach the next level just gives you access to a mod for their stats, which serves only to bump a point from one category to another.

The land/sea/air racing triumvirate the game pulled off so well on consoles makes a sloppy transition to the 3DS, due in large part to unreliable controls and a frame rate that makes all but the most serene stretches of a race nigh unplayable. While you can usually pull off basic land maneuvers like drifting without hassle, controlling aquatic and airborne kart forms is often a struggle against weird vehicle physics and stilted, momentum-killing transformations. 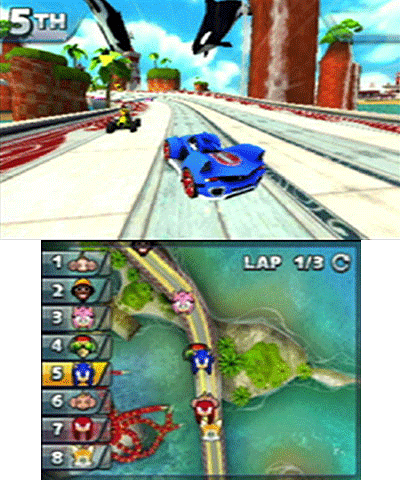 The frame rate, while somewhat tolerable when you're racing alone against your own times or against a single opponent, completely sabotages any chance of a good time when there's a full field of racers or when the 3D is turned on. The game’s decent stabs at detailed, multi-path tracks only exacerbate this problem. While these course interpretations generally have a level of scope and dynamism that would otherwise make them worthy of attention, that quality also brings the frame rate to a crawl and sometimes a near stop. It's unfortunate, since the course designs are visually interesting and well-composed uses of their respective source material.

A workable frame rate might have salvaged this uninteresting, watered-down 3DS version of Sonic & All-Stars Racing Transformed. Instead, the game's single redeeming quality is marred by technical and gameplay problems, leaving it a shallow, unworkable execution of a good idea.