As long as you're cool with waiting for it to load, LEGO City is a cool place to be.

Not long ago, I believed that LEGO games only worked because of their licenses. Titles such as LEGO Star Wars and LEGO Indiana Jones seemed to be fun only because they referenced movies I was familiar with, as the gameplay was largely forgettable. However, despite not really changing the formula too much, LEGO City Undercover on Wii U proved me wrong. Without licensed material, LEGO City Undercover is a triumphant experience, showing off how a well-made LEGO game can be fun, regardless of its brand affiliation.

Undercover amounts to what is, at its heart, a good-guy, kid-friendly Grand Theft Auto. You can go virtually anywhere and explore to your heart’s content, tracking down collectables and playing short mini-games. The constant stream of rewards makes exploration worthwhile, even if the end result isn’t more than some extra character skins and percentage increases. The world looks wonderful, and has all sorts of nooks and crannies to explore. In some respects, the exploration is Metroid-like, as a bulk of the collectables are gated, waiting to be unlocked by later abilities.

Most of those collectables can be located in the environment using the GamePad, which, in addition to that, also functions as a wonderful map and second screen. The map is particularly nice, mainly because of how easy it is to set a waypoint and scan through the environment. Additionally, the other periphery uses are nice, as you can scan objects and use it as a communicator for objectives with other characters. Unfortunately, those hoping for GamePad-only play will be disappointed, but considering that the game uses the second screen so well, it isn't a big loss. 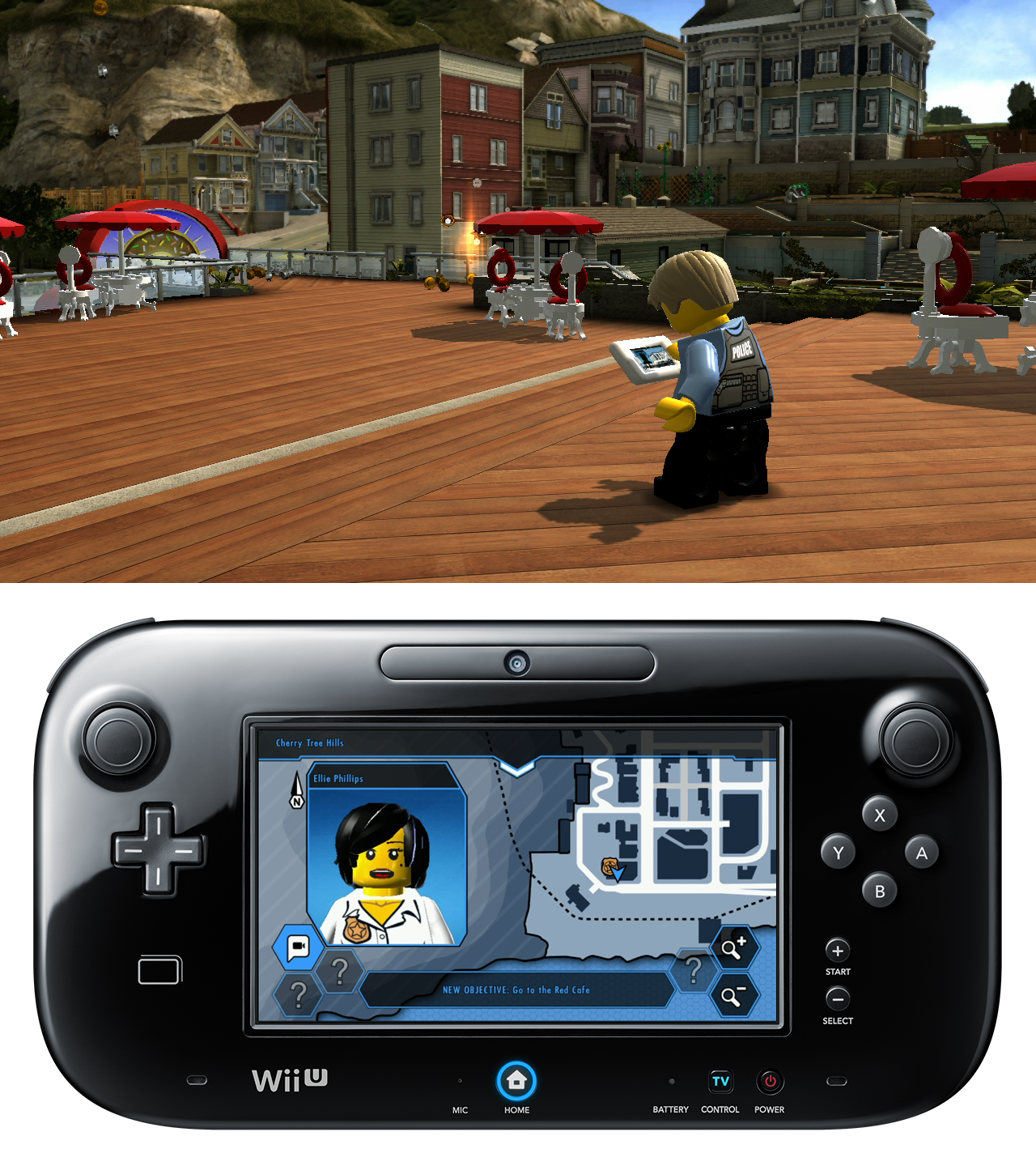 The primary focus of the game is the story mode, which takes you through 15 chapters as Chase McCain, a forsaken LEGO City cop who has come back to take down recent prison escapee Rex Fury. The story is engaging and long, taking me close to 15 hours to finish (though I took detours to explore). It’s mostly a cheesy, referential affair, but the voice acting and presentation are top-notch, making the story segments worth watching. Much like how GTA games are usually biting social satires, LEGO City Undercover endlessly references movies and related media. A jail sequence features a character that is basically Morgan Freeman from Shawshank Redemption. A shark will freaking eat you if you go into certain waters, which you will be warned about by signs that look like the Jaws movie poster. An early sequence references several famous cops, ranging from Starsky and Hutch to Harry Callahan.

Behind those references, the gameplay is focused on exploring areas, solving basic puzzles, chasing down enemies in cars or on foot, and beating up bad guys using a simplistic combat system. While Chase’s many outfits help vary the experience, the puzzles never get too interesting. Most of the time, you’re just searching for buttons to press or items to pick up. Still, it’s entertaining, on par with the content in most other LEGO games.

The load times, however, often kill that steady stream of entertainment. 30 second loads are a regular occurrence, with occasional loads clocking in at more than a minute. The game runs buttery smooth when you’re playing it, but even still, the loads are laughable and absurd. To start the game, for example, you go through the typical Wii U load screen, then a lengthy in-game load screen, then go to the main menu, and then you have to wait for it to load your game, which I’ve seen take more than a minute regularly. Obviously, this doesn’t totally detract from the enjoyment, but it’s a large enough impediment that it hurts the experience. 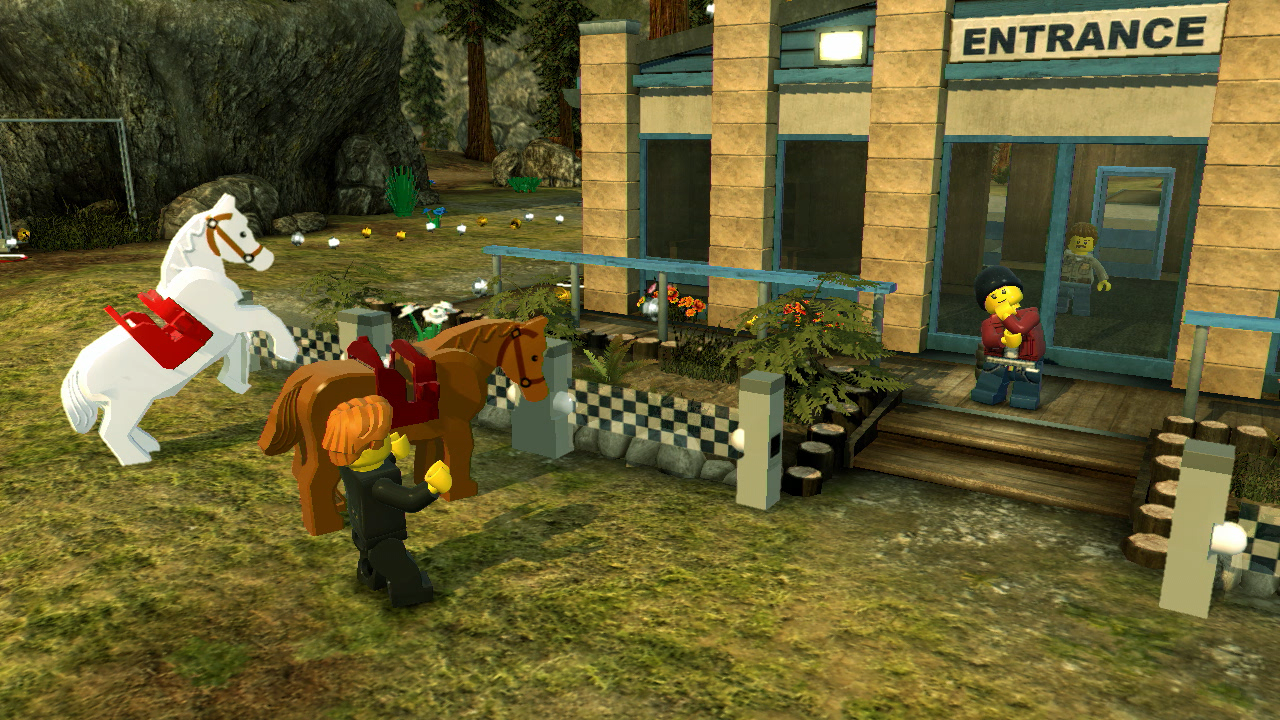 The amount of unlockables is ridiculous, as you have many different areas to discover on the overworld, hundreds of characters to unlock, and different colored bricks to find to unlock tweaks and bonuses.  Most players won’t be compelled to collect everything, but if you are, this game will last a very long time for you. With the unlockable characters, you can customize each of Chase’s in-game outfits with whatever pieces you want. So, if you want Chase in his cop uniform to wear an Indian headdress, shorts, and a butcher’s apron, you can. It won’t reflect in most cutscenes, but it’s a nice touch.

On the whole, Undercover is the most polished LEGO game I’ve ever played. The humor, while often hokey, works alongside the gameplay in a manner that makes the game charming for its long campaign. LEGO City Undercover isn’t the game to save the Wii U from its recent dearth of games, but it is still a solid, fun romp for anyone who has an affinity for LEGO games.

This has been scoring pretty well all over except for Edge. Seeing lots of 80-90% for this. When I was demoed the game at those club Nintendo tour things the humor sold me. Guess I'll get this for sure at Target with their little deal going on.

Odd that the Wii U is having so much trouble with load times, since Nintendo consoles usually feature near non-existent load times. Perhaps the upcoming system update will help things.

Load times or not, this game looks like an absolute blast. Looking forward to it.

this game looks awesome but im gonna wait until they fix the loading times in a patch. hate that nintendo finally went the loading road

From the Kotaku review. Totilo timed from the moment you left the police HQ until you had control in the open world: 1:20.

Which is why you should only visit police HQ like once per session. Unlock all the vehicles and characters you've earned and then get out of there never to return!

It's also a Nintendo Published game. Good luck on waiting for a price drop.

This game is worth is price. and the load times are a non issue.

I get the sense they have improved but I can not be sure.
Make no mistake, though, hey are still pretty long. Game is very fun, though, so don't be too scared off  :)

A big electronics retailer here has a 3-for-2 sale, I tried to get LC:U as one of my three games but it was freaking sold out! Instead I picked up Soul Sacrifice...